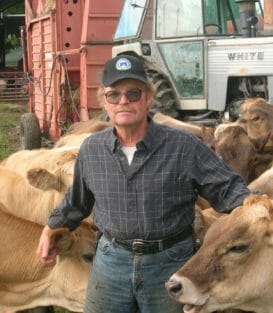 This spring has been one for the books — early warm-up, too wet some areas, too dry others, too cold, everything is slow.  It’s this kind of weather that proves

both the worth and the drawbacks to cover cropping.  Before we file our experiences away, I think we need to think about the process, and see what lessons to take away.

I’m basing my comments on observations in north central Iowa, plus comments from the email discussion lists, plus previous experience.  Let me add that I’m no expert, and am right in there learning with the rest of you.  I do hope I’ve got the biggest mistakes behind me, but I’m not holding my breath.

We all know cover crops have great potential, but create challenges. I’m addressing several points: the need for an overall strategy; the need for the proper mindset; suggestions on a “horses for courses” approach; and a warning that we may be scaring our neighbors.  Let’s start with the last.

Over the fence line

For most of our neighbors, the idea of planting into anything short of “clean” tilled fields is about as intimidating as a couch potato thinking about competing in the Olympics.  That’s why it’s important we start at a manageable scale so we can be successful.  Neighbors take a certain satisfaction in seeing something new not work for someone else.  It re-enforces their resolve to not try anything different.

Perhaps this would be a good place to review how new ideas get spread.  It’s easier to explain if we think in terms of exploration and settlement of new land.  We are not all wired the same way.  There are people who just have to see what’s around the next bend, over the next mountain, in the next valley.  They don’t care or plan to ever return.  These are the wanderers.  They aren’t interested in doing the same thing differently as in whole new approaches.  In idea terms, think Steve Jobs (how many things he “imagined” do we rely on every day?).  Cover cropping. Think Rodale or Dick Thompson who was putting three rows of rye on his ridge tops for weed control more than 20 years ago.

The scouts are a lot like wanderers, except they plan to come back from their journeys.  They hear tales from the wanderers and hope to use the knowledge to help lead more people to the area.  In short, they see opportunity in being a guide…in finding a path for the wagon trains.  In idea terms, these are the people who help make an imagination a reality.  In cover crops, this is you, folks.

The scouts’ clients are the pioneers.  They’re the adventurous ones who want to make a better life and are willing to endure the hardships to follow a scout across burning prairies and over mountain passes.  They’re only willing if the scout does a good enough sales job, pushing the wonders of the new land and downplaying the hardships.  In ideas, these are the early adopters, the ones who line up for every new iPhone release.  These are your most receptive neighbors, but the ones who may also have second thoughts when they see planters hidden by tall and dense cover crops.  We must be careful to focus on the positives.

This should explain why cover cropping has had slow acceptance, but we also need to recognize the importance of our mindset.  It’s the mentality that results when our philosophy and beliefs confront reality.  This is the part of our psyche that insures we are prepared for whatever comes.  If you aren’t accepting of the fact that farming with cover crops is different, the challenges become daunting.  It’s like conservation.  Conservation is a process, a mentality, an approach…not just practices.  Cover crops are part of that process.  I often wonder if we shouldn’t think in terms of year-round cropping, to put more emphasis on the benefit of what’s being raised during the non-productive majority of the calendar.

Our mindset must give us the confidence.  It results from the due diligence of learning from others, from experimentation, and from knowing the only guarantee is cover cropping is a work in progress.  You’re a scout, looking for a better way.  You know you’ve got the right mindset when you can find satisfaction in making something work that you’ve always believed shouldn’t.