The Future of Family Farms is Coming Soon!

Advanced kudos for the book have been coming in. Jim Habana Hafner, Executive Director at Land for Good, says “PFI and its members are an inspiration! They remind us all that family, community, and stewardship are at the heart of farming. Their stories are a call to action to everyone who ‘belongs to the land:’ start the conversation about your farm’s legacy today. The future of rural communities and regional food systems may depend on it.” 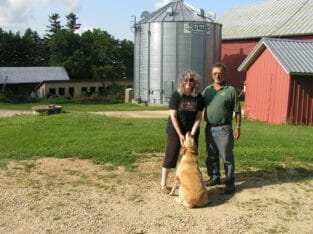 According to Julia Freedgood, assistant vice president of programs at American Farmland Trust, “The Future of Family Farms is a timely and important new book about the future of farmland and the hopes and challenges of the families who farm it. More than 40 percent of America’s agricultural landscape is owned by seniors aged sixty-five and older so, as the author notes, we’re in for a lot of drama in the coming years. The book’s framing chapters make a compelling case for action, and the Practical Farmers’ stories are both moving and relevant, reinforcing the need for families not only to have shared commitment but also a vision and plan for the future— whether they’ve been farming for more than a hundred years, or are beginning farmers.”

The Farm Legacy Letter project is designed to help farmers and farmland owners think about their farm’s future and talk about it with their families. An essential complement to handbooks on business succession, this book gathers the letters and stories of Midwestern families about the land they cherish—how they acquired it, what they treasure most about it, and their hopes for its future. Some of the writers descend from families who have owned a particular patch of the earth since the 1800s, while others became farmland owners more recently—one as recently as 2015. Some are no longer farmland owners at all, because—after careful thought about what mattered most to them—they sold their land to the next generation of farmers.

All of these writers hope that, by sharing their farmland legacies, they will encourage others to ponder and then write about the histories, accomplishments, challenges, and hopes for their farmland for the generations who come after they are gone.

Teresa has dedicated the book to the members of Practical Farmers of Iowa and all proceeds from the sale of the book will go back to PFI.