Lee Tesdell owns the land; Micheal and Charles Helland are his tenant farmers. “Effective landlord-tenant relationships are critical when it comes to conservation practices,” Lee says. The Polk County farm has been owned by the Tesdell family since 1884. The Hellands have been farming the land since the early 1980s. 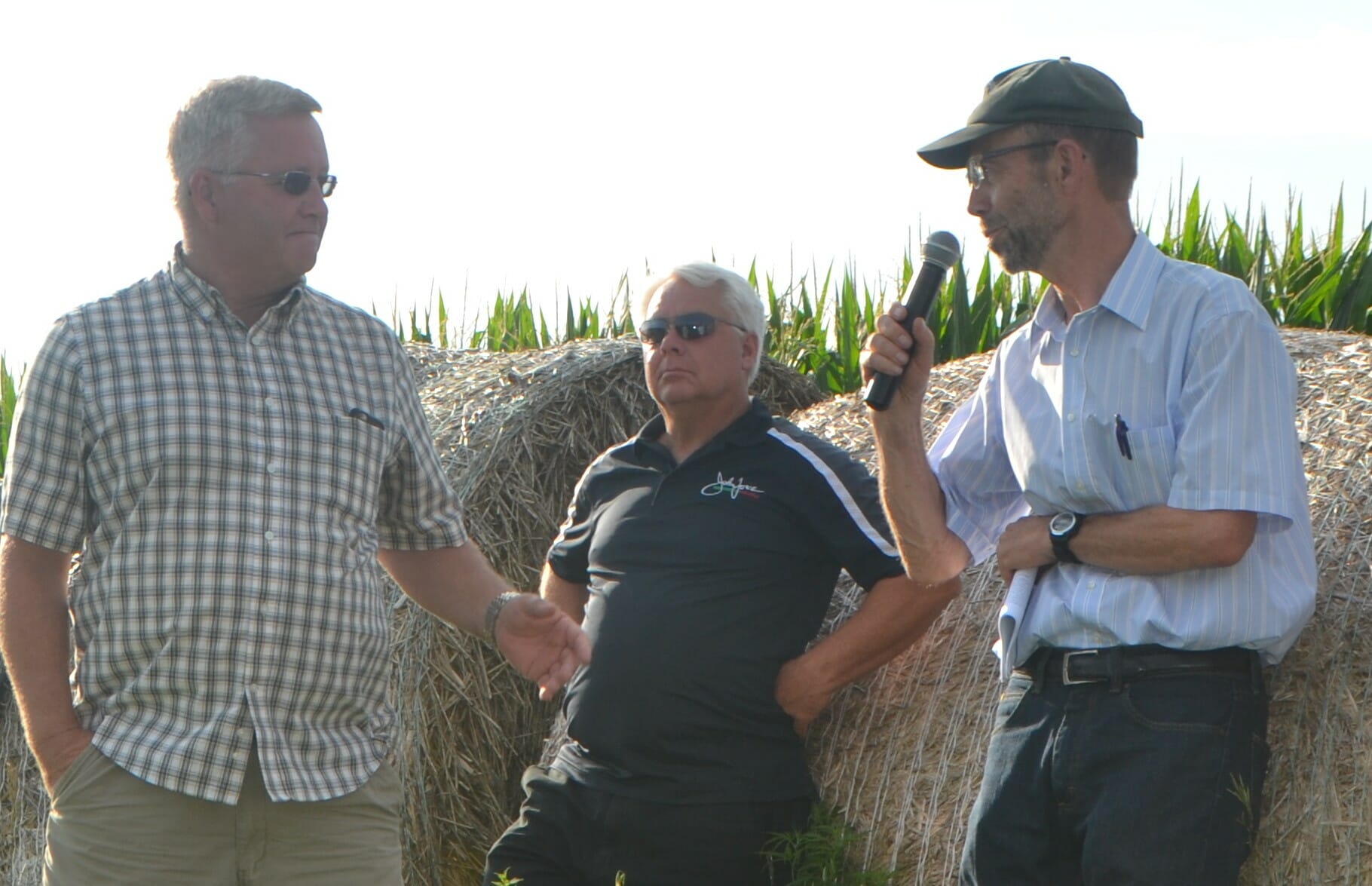 Lee Tesdell (with mic) spoke about the importance of landlord-tenant relations with tenant-farmers Michael and Charles Helland. The Hellands have been farming Lee’s family’s land since the early 1980s.

Landlord and Tenants Working Together

Lee notes that >50% of the farmland in his watershed is not farmed the land’s owner: “All of us landowners in the Fourmile Creek Watershed need to do our own part to improve conservation and water quality.” Because of this, both Lee and the Hellands work closely to get on the same page and address these issues on Lee’s farmland.

Among the practices the Hellands have implemented on Lee’s land:

When Lee approached the Hellands about using cover crops 4-5 years ago, Charles Helland remembers, “We were already doing some on our own land so expanding to also do them at Lee’s wasn’t a problem at all; we were already interested in trying them here.” Lee sweetened the deal by offering to himself do all the “legwork” necessary to secure state and federal cost-share dollars for seeding the cover crops. He worked with Paul Miller (of NRCS) and Amanda Brown (of Polk SWCD) to secure cost-share. The remainder of the cover crop costs are split 50-50 by Lee and the Hellands. Since eliminating fall tillage and adding cover crops, both Lee and the Hellands noted that soil erosion has noticeably been reduced. Mike Helland remarked that the cover crops are also reducing early season weed pressure in soybeans. 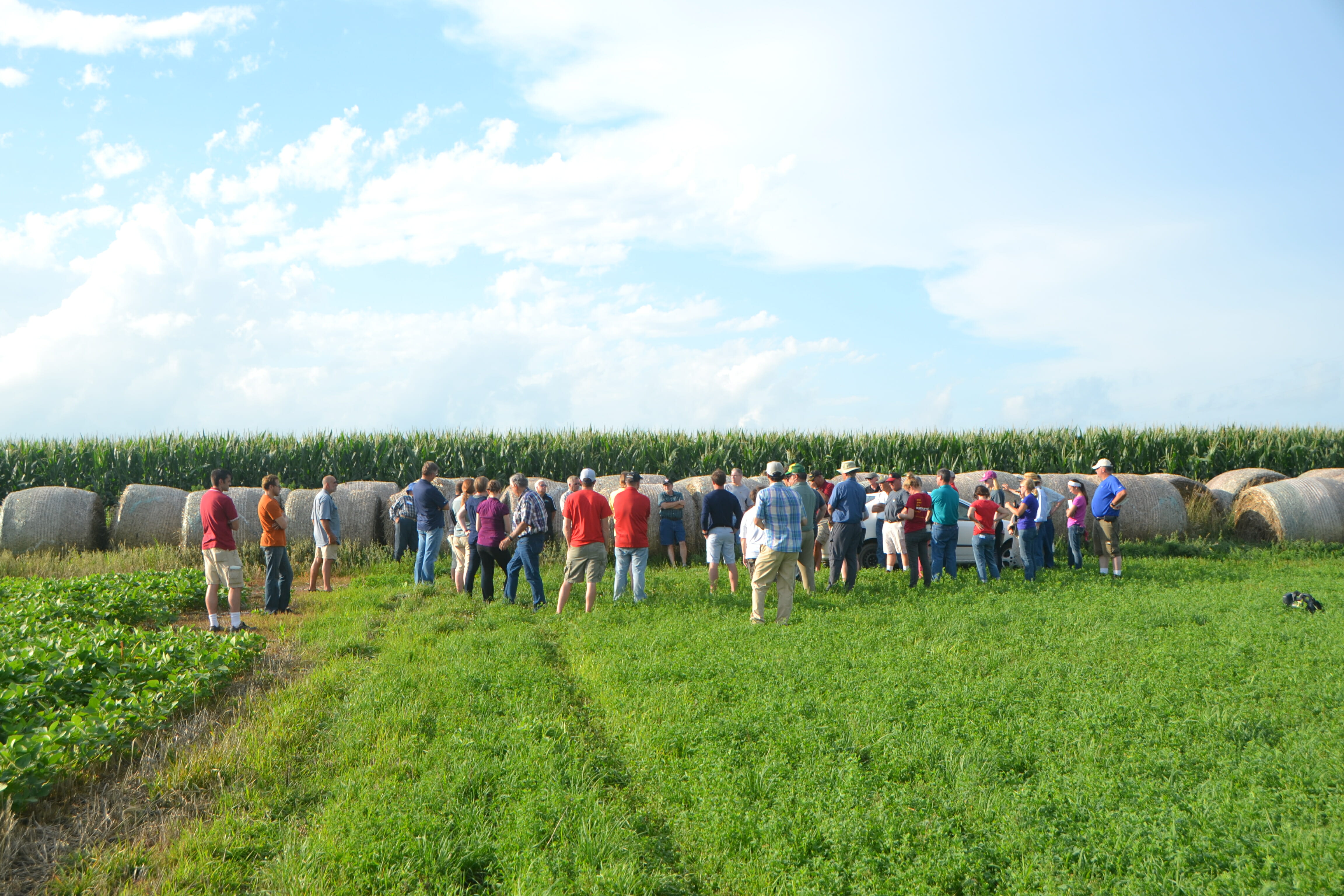 Lee has an alfalfa hay field he uses to feed his small sheep herd. The nitrate concentration of tile water coming from this hay field is already below the EPA drinking water standard (10 mg/L) prior to entering the woodchip bioreactor.

In the fall of 2013, Lee had a woodchip bioreactor installed to treat tile water leaving his land. Woodchip bioreactors consist of a buried trench measuring 15-20′ x 100′ filled with woodchips into which tile water is diverted. The woodchips provide a favorable environment for anaerobic microbes that denitrify the water (N2 gas is emitted back into the atmosphere as a result). Lee secured EQIP funds as well as partnered with the Iowa Soybean Association (ISA) on the project. ISA routinely tests the water entering and leaving the bioreactor. Since May 2014, the nitrate-nitrogen concentration in the tile water leaving Lee’s land has been reduced by 47% thanks to the bioreactor. 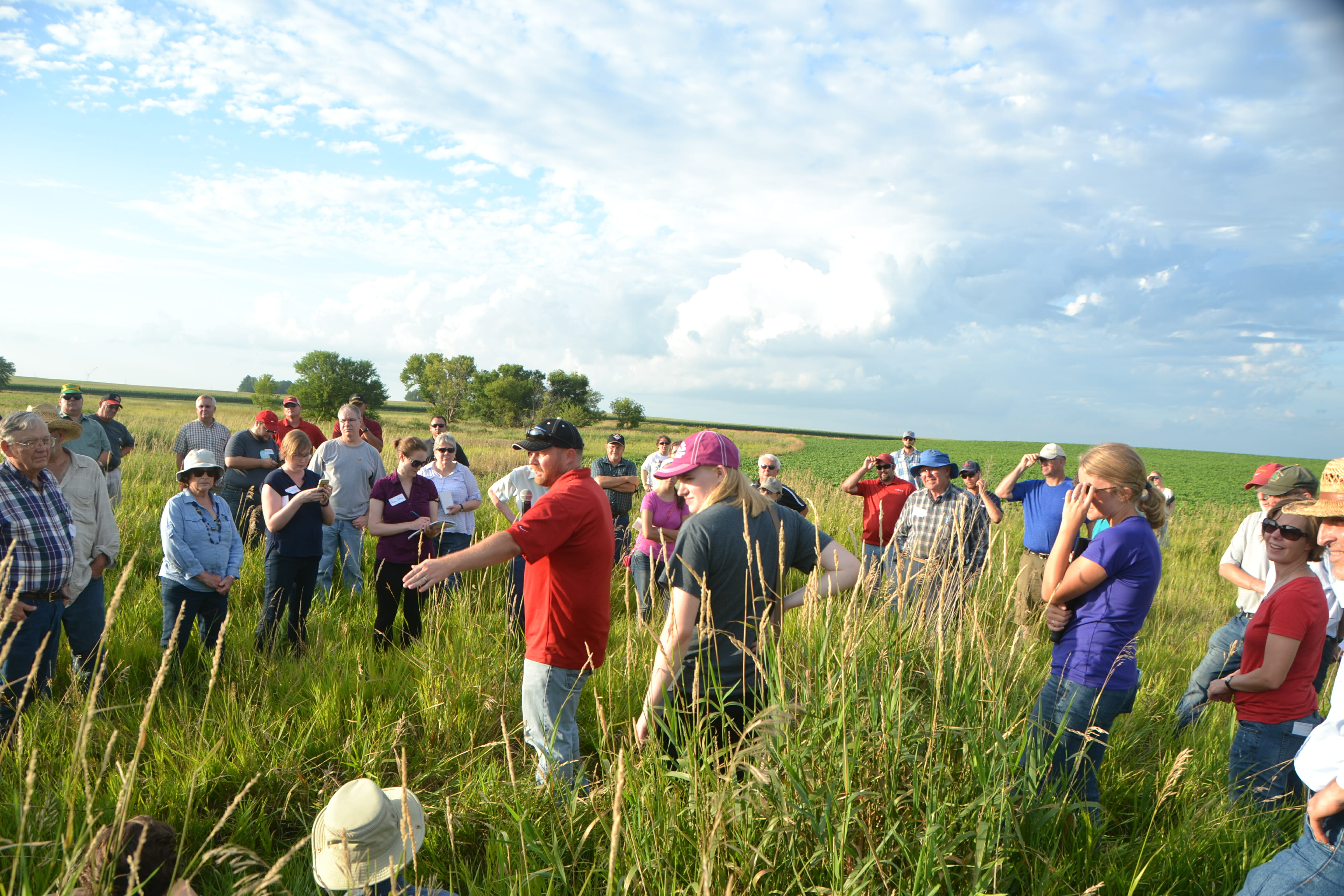 Keegan Kult, of the Iowa Soybean Association, explains the woodchip bioreactor Lee had installed in Nov. 2013 to treat tile water coming off his farm.

Lee invited Todd Hammen of Iowa Energy Alternatives to explain the 6- and 18-panel photovoltaic solar arrays installed on his property. Lee had the panels installed in order to reduce his carbon footprint (and his electrical bill). In 2014-2015, Lee’s home’s average daily electrical usage was 25.66 kWh. In the five days leading up to Lee’s field day, the 24-panel array produced an average 42.59 kWh per day. Lee expects the cost of the installation to be paid back from savings in 12-15 years. 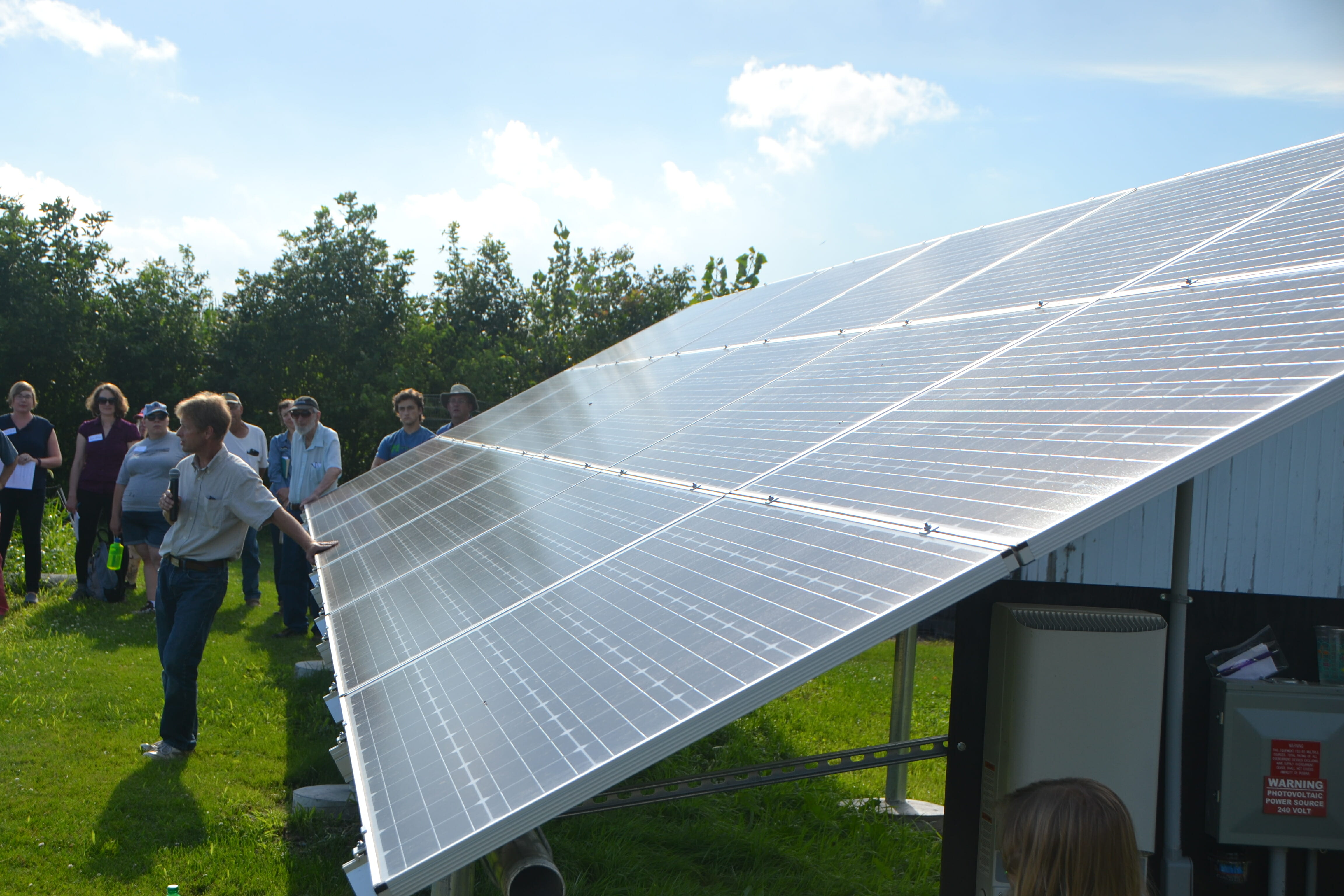 Todd Hammen, of Iowa Energy Alternatives, with one of Lee’s photovoltaic solar arrays.

Luke Gran, of Prudenterra, recently helped Lee reassess and maintain the aging windbreak on the west side of his house. The windbreak is currently mostly comprised of old ash and Norwegian spruce trees. But due to the predicted decimation of ash trees by the emerald ash borer, Luke helped Lee determine the placement and selection of native trees and shrubs to replace those ash in the windbreak. 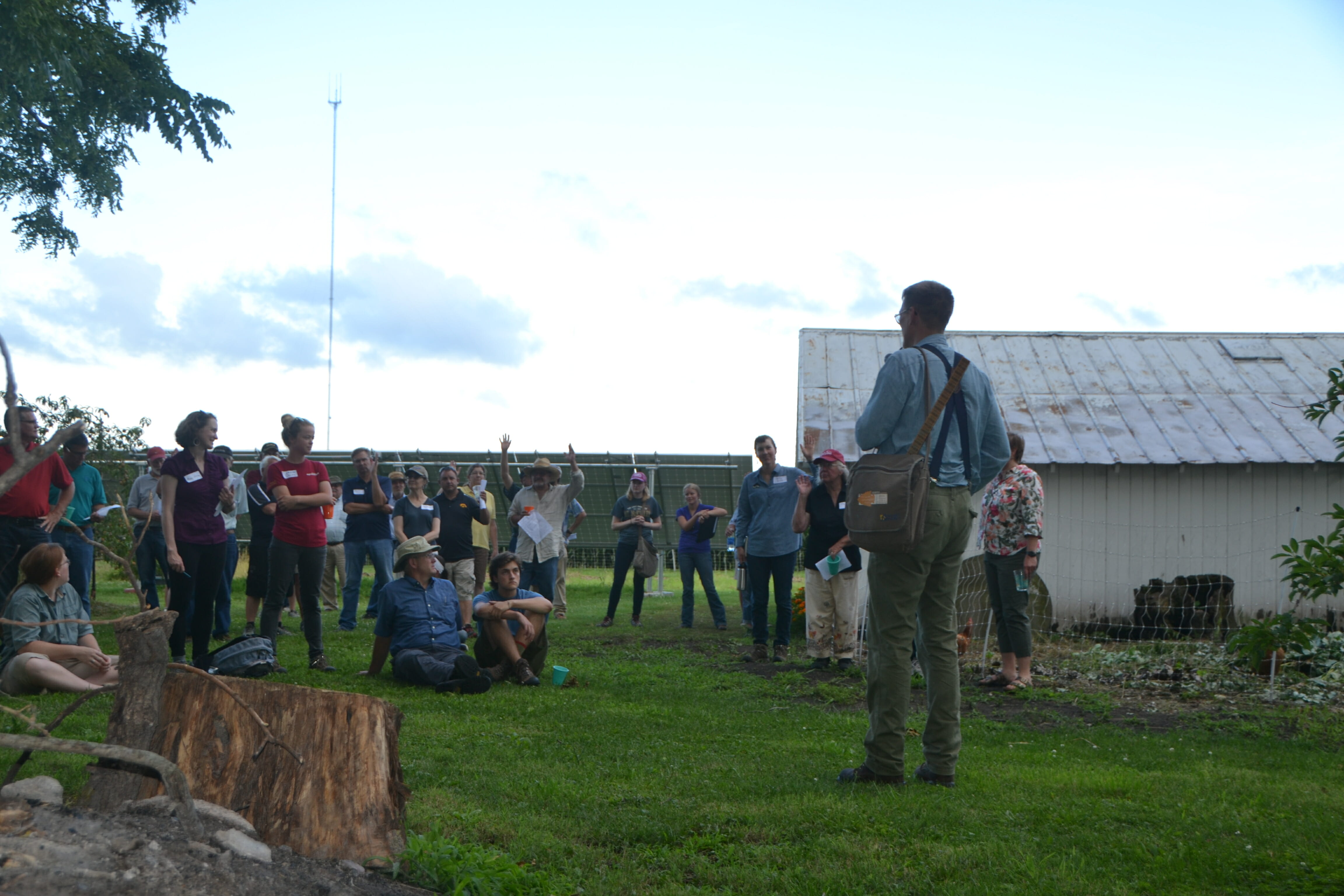 Luke Gran of Prudenterra led a discussion on selecting tree and shrub species for a windbreak.

Lee closed the evening with these thoughts: “We have no living roots in the soil for ~7 months of the year. That is the problem. Most farmers care about the soil and water quality problem, but we are stuck in a short-term mindset. Landowners and farmers need to work together on long-term thinking and solutions.”

View Lee’s handout that provides a snapshop of the topics we discussed here.