Leading up to this June 23rd field day in Southern Iowa, a forecast of rain turned into a concern about the heat, but it ended up being a beautiful day for learning about flower production. 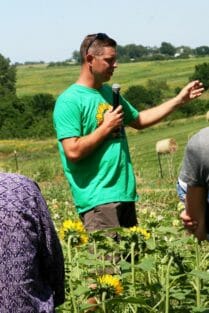 Chad Hensley talks to attendees in one of their flower gardens.

Thirty-five people travelled down to Lamoni, situated just off I-35 on the Missouri-Iowa border. We gathered at Chad and Katie Hensley’s Big Creek Farms, where they’ve been raising cut flowers and produce on about 1.5 acres for four years. Chad began by describing the history of their farm including his initial interest in cut flowers: dollars and cents. Return on investment is quick, flowers can be very profitable per square foot, and they saw a market for chemical-free locally-grown flowers.

Before delving deeper into the topic of the day, guest speaker Ann Franzenburg introduced herself and her farm’s history with growing flowers.  Ann was on hand to provide attendees with her insight from eight seasons of cut flower production at Pheasant Run Farm in Van Horne, where flowers fit in with their “safety net” of diverse enterprises including row crops, hogs, produce, medicinal herbs and cut flowers. They’ve learned over time to start small with a new venture, and scale up over time.

Chad and Ann each started off talking about their marketing strategies including the pros and cons for each avenue. Big Creek Farms operates a small floral CSA in which local customers pay at the beginning of the season to receive a weekly small or large bouquet. The CSA is helpful for bringing in early season income, but the Hensley’s mentioned its somewhat limited potential with Lamoni’s smaller customer base. Along with their produce, the Hensley’s also market their flowers at the Lamoni farmers market where their flower sales aren’t significant, but they’re able to interact with the community and drum up interest for future orders.

Chad and Katie also sell some “hard to ship” flower varieties such as zinnias to a local florist in town, though perhaps the main income for their flowers comes from florists in Kansas City. They described how they’ve found a large amount of high-end florists in Kansas City who are a bit more creative and willing to pay a fair price. This may possibly be because of a customer base with more disposable income (The Hensley’s shared a story about how some of the flowers they sold a KC florist ended up with pop singer Katy Perry!). One tip they’ve discovered is that florists tend to be visual people; it’s very difficult for them to turn down fresh-cut flowers right in front of them, as opposed to taking orders over the phone. There have been times when Chad can demonstrate the durable quality of his locally-grown flowers compared to the ones shipped thousands of miles, which can be a great selling point. 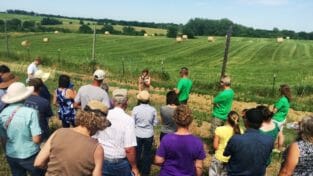 Over the years Pheasant Run Farm has been growing flowers, Ann has been able to establish four main marketing avenues for their flowers: During the height of the season they do three farmers markets a week (she says the bigger the better); they sell to a number of local florists (she recommends smaller scale florists as opposed to larger chains); she does about 15-20 weddings per year (YouTube is a huge help for learning bouquets and other wedding arrangements); and lastly Ann also sells bouquets to local grocers and other retail outlets.

The discussion of these marketing avenues led into pricing strategies, which varies according to the market. For farmers market prices, at Ann’s large markets she’s able to charge $1 per stem, while the Hensley’s generally use $.75 per stem in Lamoni (depending on variety). The Hensley’s added that they often ask the customer for a price range, then can design a bouquet to fit the budget. It’s a good idea to keep an eye on the local florist prices, then charge what you see people paying. When selling to florists, keep in mind the standard 10-stem bunch, and check the USDA AMS weekly report from the Boston Ornamental Terminal for weekly wholesale prices. And finally, Ann reminded the group of two things: while produce has no tax involved, you need to collect tax on flowers at the market (florists or grocery stores will collect the tax for you); and your time is not free, so don’t forget to factor in your work!

“I make more money off that ditch than some of the rows in this garden.”

The conversation on pricing soon turned to production, as Chad listed off some of the fillers they use that grow like weeds (or, actually are weeds). Many annual grasses or perennial flowers like milkweed, queen ann’s lace or chamomile grow very well on the periphery of the farm, and they avoid mowing the ditch to encourage the growth of these nicely textured plants. Chad mentioned his philosophy to work with nature, not against it, to which Ann added that sometimes weeds in the flower bed can actually encourage the flowers to grow taller, longer stems. And finally, because they also grow produce, both Pheasant Run and Big Creek are able to draw from their vegetable crops such as allium flowers or fennel leaves for unique additions to bouquets. Chad added that some vegetable crops such as gourds, squash or pumpkins can also be sold as ornamentals through their flower markets, creating one more way for the enterprises to complement each other. 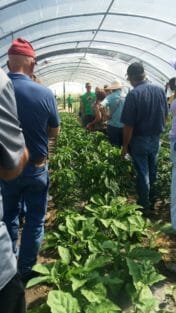 Standing in one of the two high-tunnels at Big Creek Farms. The Hensley’s used the Environmental Quality Incentives Program (EQIP) from the NRCS to help with materials and construction costs.

As our group moved around the farm for a tour of the Hensley’s beds and two hoop houses, we stopped for a harvest demonstration with a couple different flower varieties. It’s important to have as much stem as possible (florists need at least 18 inches), to make sure it is sturdy, and not to harvest too early or too late in the bloom time. There was also a discussion of the various types of flowers and the number of successive cuts that can be made per plant. For instance, one sunflower plant will typically only produce one flower, so Ann tends to plant a mix of 300-500 sunflowers each week to ensure continuous harvests.

The tour wrapped up and we concluded the day with some tasty snacks back under the shade. Katie had prepared a slew of spreads for us to enjoy: garlic scape pesto, oregano pesto, basil pesto, black bean hummus and garlic scape hummus along with rosemary shortbread cookies and lemonade.

The final discussion of the day was about the growers favorite flower varieties and a bit on post-harvest handling. Post-harvest handling for the Hensley’s essentially consists of harvest to market within roughly 24 hours, using the root dip Floralife for most flowers. Ann has the benefit of a walk-in cooler operated by a coolbot—you can read about the pros and cons in this research report—which allows them more time to spare between harvest and market.

If you’re interested in learning more about cut flower production, check out this excellent archived farminar with Lynn Byczynski, author of “The Flower Farmer”, and stay tuned for more flower learning opportunities at PFI’s 2017 Annual Conference in Ames, January 20-21.

Thanks to Chad and Katie Hensley, Chad’s folks Cherie and Mark, and Ann Franzenburg for putting on a wonderful field day!