Practical Farmers of Iowa’s mission is to strengthen farms and communities through farmer-led investigation and information sharing. One of the primary ways we accomplish this mission is through on-farm research as part of our Cooperators’ Program. Over the past few years, the investigation of cover crops by farmer-cooperators has dominated the program. Below I offer a review of recent farmer findings. 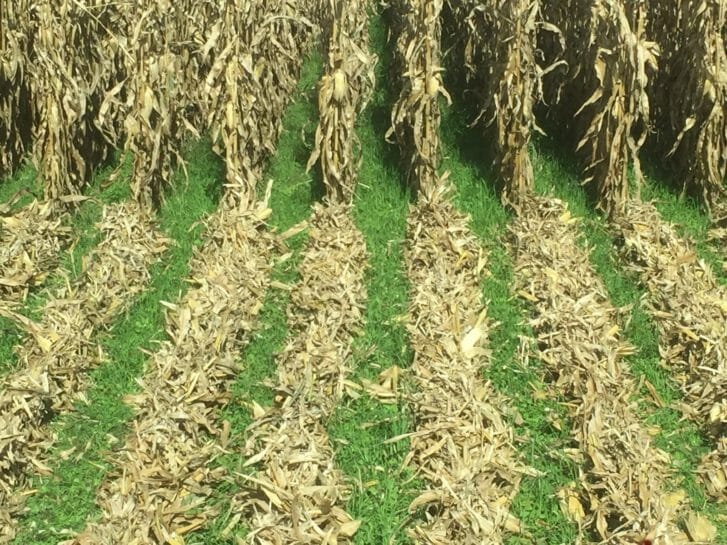 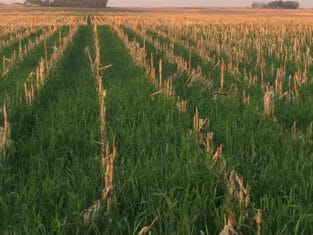 Thanks in part to years of on-farm use and past university research, Practical Farmers know that cover crops can:

Reducing erosion, soil loss and nutrient loss have gained much public attention with the release of the Iowa Nutrient Reduction Strategy in 2013. The strategy lists cover crops as one of the more effective in-field practices farmers can use to reduce the loss of nitrogen and phosphorous from fields that might otherwise pollute surface waters.

You’ll notice that the Nutrient Reduction Strategy credits a cereal rye cover crop to effectively reduce N and P loss but also warns that the cover crop can reduce yields. But is this necessarily true? This is the question that a number of farmers asked back in 2008 when Practical Farmers and Iowa Learning Farms launched a joint research project across the state. As part of this project, farmer-cooperators used replicated paired strip trials comparing strips of cover and no-cover crop on their farms.

Cover and no-cover strips at Jim Funcke’s farm near Jefferson in Greene County.

The long-term project, “Winter Cereal Rye Cover Crop Effect on Cash Crop Yield,” includes 53 site-years across the state and has found that for the most part, the cereal rye cover crop DOES NOT negatively affect corn and soybean yields (Figures 1 and 2). Farmer-cooperators report the reductions in corn yield observed in the first two years of the study were due to inexperience with cover crops: improper planter settings and/or insufficient cover crop termination.

Corn yields from this project over the past two years have been near or above 200 bu/ac (Figure 3). Soybean yields from 2015 were mostly above 50 bu/ac and the cover crop significantly IMPROVED soybean yield in three instances (Figure 4).

Can we reap more environmental benefit from cover crops?

It stands to reason that giving a cover crop more time and opportunity to grow will increase the cover crop’s ability to hold soil in place and scavenge nutrients. Practical Farmers have found that there are two ways this can be accomplished: 1) seed the cover crop as early as possible to allow for more fall growth and 2) delay the termination of the cover crop as late as possible the following spring ahead of cash crop planting.

The two August seedings resulted in significantly more growth that fall and the following spring (Figure 5). As a result of that increased amount of growth, the two August seedings also scavenged more soil N than the September seeding (Figure 6). Irrespective of seeding date, compared to no cover crop, the cover crop reduced the amount of plant-available N in the soil in the early spring that would be vulnerable to loss. We calculated the N content of the cover crop by multiplying the amount of aboveground biomass by the N concentration (%). Between the fall and spring sample times, the N concentration of the cover crop at Jack’s ranged between 2.5-4.5% among the seeding date treatments.

How am I going to plant into all of that biomass?

Allowing a cover crop to put on so much growth in the spring can seem daunting when thinking about planting the cash crop. In true Practical Farmers spirit, farmer-cooperators Bob Lynch, Jeremy Gustafson and Jack Boyer compared terminating a cover crop 10-14 days ahead of planting soybeans to terminating within a day of planting soybeans for the project, “Cereal Rye Cover Crop Termination Date Ahead of Soybeans.” 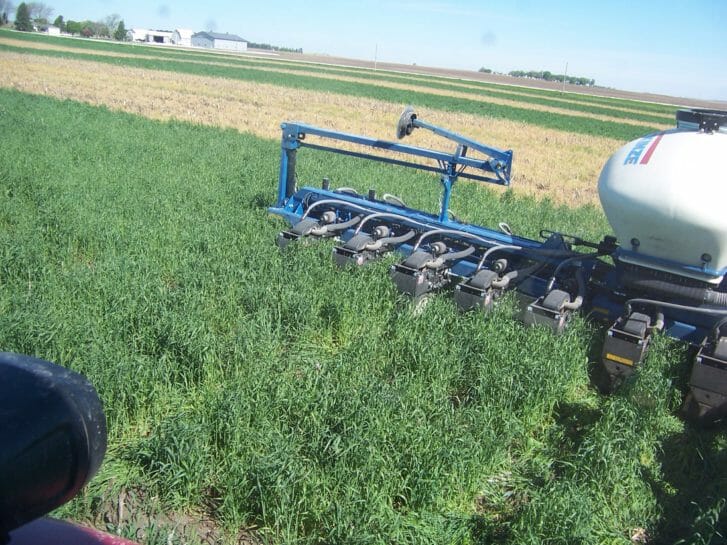 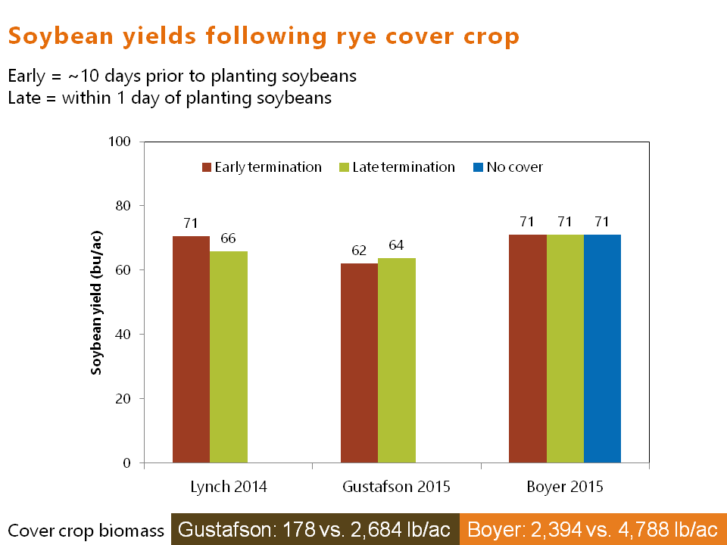 Finding the cash in cover crops

One advantage Jack saw with the late termination of the cereal rye was the amount of residue that persisted through the growing season and acted as mulch. Early in the season, Jack noticed that the strips with cover crops (early and late termination) had far less weeds than those without. As a result, he decided to only spray the no-cover strips with a post-emergence herbicide on July 3 (Cobra and Roundup PowerMax). By Aug. 26 Jack noticed: “The cover crop areas have continued to be as clean or cleaner than the no-cover areas. They have not had a late flush to make them worse than the sprayed no-cover.” The cover crop areas remained mostly free of weeds through the end of the season. Jack also realized an effect on his pocketbook from not having to spray the cover crop strips: “That’s about $40/ac of herbicide savings to pay for seeding the covers.”

What about other cover crops?

Not surprisingly, small grain species like cereal rye, oats, wheat, triticale and barley have performed quite well–these are the most commonly used cover crops in Iowa. Legumes like hairy vetch, crimson clover, lentils and peas have not fared so well. Brassica cover crops like mustard, rapeseed, turnips and radish have begun to show promise, particularly when thinking about providing fall ground cover. 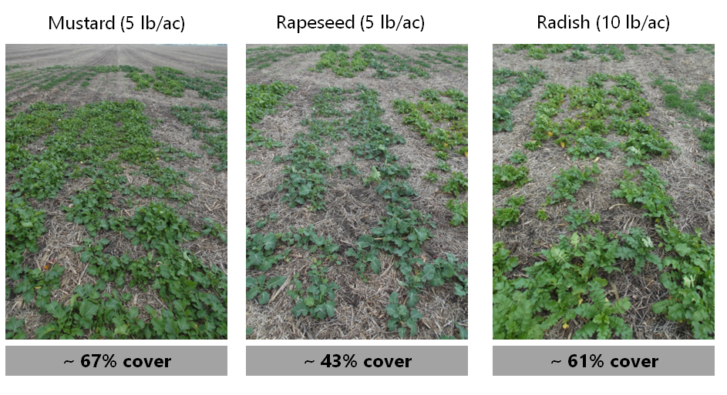 When thinking about brassica cover crops, cost must be considered. In the photo above, radish was seeded at twice the rate as mustard and rapeseed to achieve ~61% fall ground cover. However, mustard and rapeseed have much smaller seeds than radish. When considering seed costs and seeding rates, you can get “more bang for your buck” in a pound of mustard or rapeseed than a pound of radish. 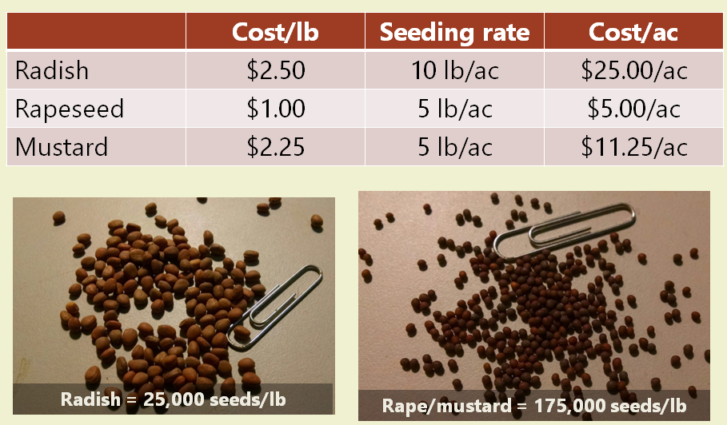 Seed costs per lb are quoted from Green Cover Seeds.

Providing an alternate rooting structure to fibrous rooted small grain cover crops is often a consideration when thinking about using brassica cover crops. Brassicas have the potential to provide deep taproots. The radish often dominates this conversation, but upon closer investigation the other brassicas root just as deeply (if not as “thickly”). 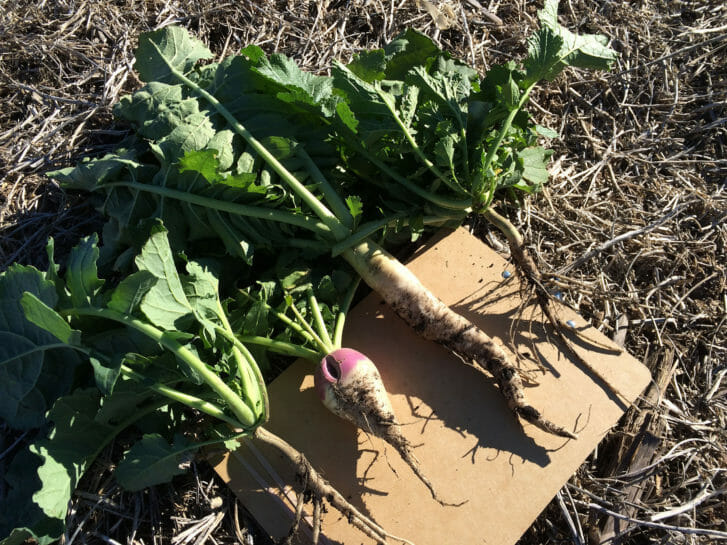 With the results and observations from these iterations of the Cover Crop Variety Trial in mind, Practical Farmers has devised this handy Cover Crop Recommendations fact sheet.

Cover crops can do “double-duty” by seconding as a source of forage for grazing livestock. The lush, green foliage provides a high-quality feed for cattle during the fall and spring. This can give pastures a rest and extend your grazing acres without extending the total amount of acres you farm, as Bill Frederick of Jefferson likes to put it. 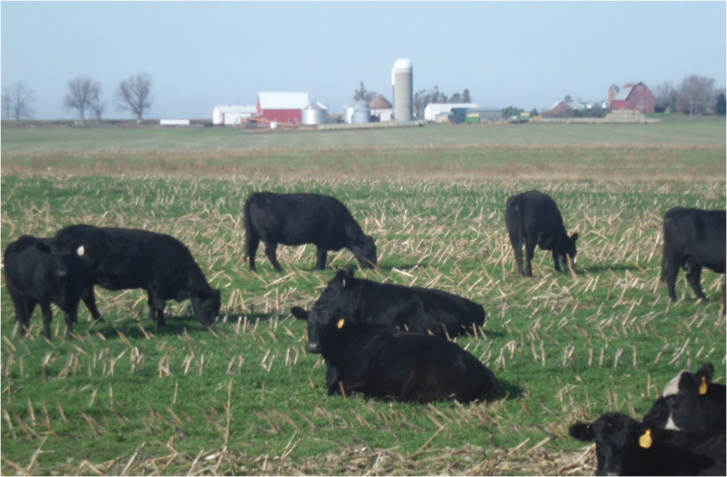 Dave and Meg Schmidt sought to determine how much they could save by substituting grazing of cover crops for purchasing hay. They conducted a research project, “Grazing Cover Crops for Winter Feed,” over two winters on their farm near Exira in Audubon County. From November 2014 to March 2015, their cattle grazed 200 acres of a cereal rye cover crop in corn stalks. The Schmidts didn’t end up regularly feeding hay to the cattle until early February 2015. Over that winter (Nov. 2014 – Apr. 2015), the cover crop and corn residue was able to meet 48% of their animal feed requirements (Figure 8). 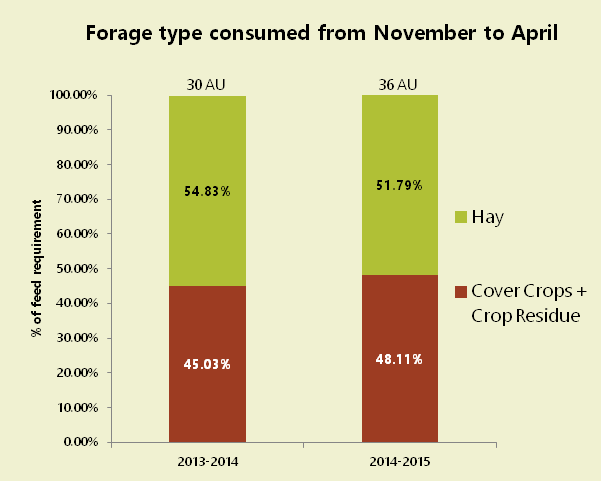 Most Practical Farmers have come to understand the importance and value of cover crops. They know how well cover crops hold soil and nutrients on the farm and provide a quality source of forage for grazing livestock. That being said, we have a long way  to go in terms of cover crop adoption in the state to reach the goals of the Iowa Nutrient Reduction Strategy. 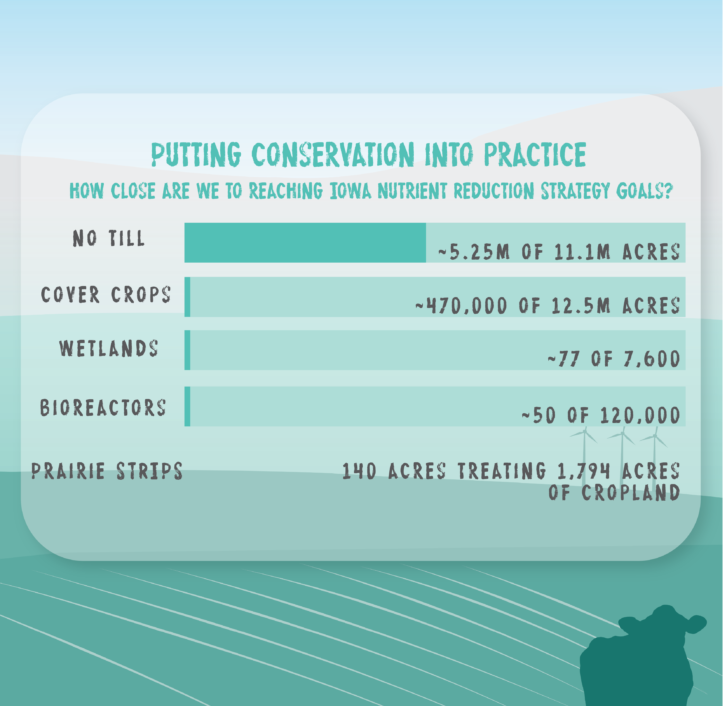 Practical Farmers should continue to carry the message