Leroy and Marlene Zimmerman moved to Iowa from Pennsylvania to escape escalating land prices, and now raise strawberries, blueberries, sweet corn, watermelon, cantaloupe, pumpkins, hoophouse tomatoes, and a few other vegetables. As brand new members of Practical Farmers, they hosted a wonderful field day at their farm near Orchard, Ia, in collaboration with Leroy’s brother, Daniel. The group discussed strawberries, blueberries, equipment, and high tunnel tomatoes. After Leroy’s farm, the group went to Daniels greenhouse business just two miles down the road (and returned to Leroy’s at the end for ice cream and strawberries!). 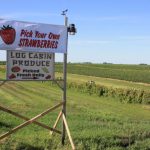 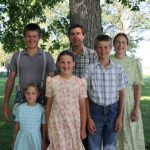 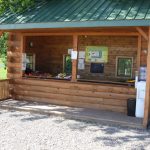 Leroy’s strawberry plants stay in the field for three years. He uses a raised bed maker to make the beds and lay the drip tape and plastic in one pass. He then uses a home-made hole-puncher (bicycle wheels with protruding carriage bolts) to set two rows of holes in the 1.5 mil plastic every foot. This spacing provides 15,000 strawberry plants per acre, which takes 8 men 4-5 hours to transplant. Leroy also uses a simple home-made transplanting tool – a piece of steel bent at 90 degrees with a bite out of the end (like this one from UNC). The end of the tool grabs the root, and one long push brings the root down to the correct depth. Leroy’s preferred varieties are Brunswick, Jewel, Flavorfest, Sonata, and Cabot. Leroy notes this would be an expensive way to grow strawberries if he wasn’t doing U-pick. But for the experience of the customer, having clear rows, few weeds, and places to walk is important.

The first year the strawberries are in the ground, Leroy applies Apogee, a growth regulator, to limit the growth of runners (daughter plants). Prior to using Apogee, he and his workers were manually removing runners every two weeks. The blooms are removed during the first year and no fruit is harvested from the new plants. Harvest begins the second year, and no herbicides are applied over the plants during the second or third year. For U-pick, Leroy assigns guests to a row, and asks them to flag how far down the row they pick. Of course, people move; Leroy has his employees clean up rows after U-pick guests for farm stand sales. The only time Leroy will use a commercial fungicide  is during bloom time. Once ripening begins, neither he nor his guests want that on the plants. He will use a hydrogen peroxide mixture, if needed. Leroy has been growing strawberries by the three acres on the road for nine years. When a bed comes out, he spreads manure and plants a hybrid mustard which he terminates at head-height and tills in. He then plants a tillage radish in November, and then plants strawberries again the following year. Leroy acknowledges this isn’t the recommended rotation, but he will continue it until he sees some problems. 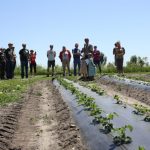 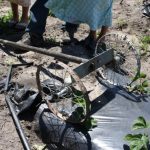 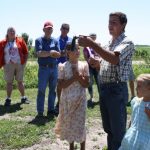 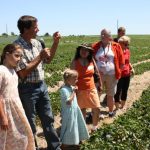 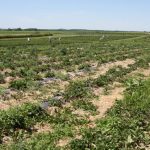 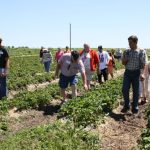 This is the first year Leroy is marketing blueberries – and he admits he is still learning a lot! His biggest battle is soil pH, which he amends using elemental sulfur. He has just started using sulfuric acid in the irrigation water this spring to see if that helps keep the pH down. He started at 7.0, was down to 5.4, and right now is at 5.9.  He would like his plants to be taller and less bushy; their current stature indicates that they weren’t growing quickly enough early on. Leroy’s blueberry varieties are Rika, Blue Ray, and Nelson.

Leroy finds his harvest conveyor an essential time and labor-saving tool, and delivers a higher quality product. He says it is “fabulous, to say the least.” The conveyor is hydraulically powered, and with two or three people walking behind, they use the conveyor to harvest sweet corn, pumpkins, and melons. The brushes on the conveyor are great for shining up watermelon and pumpkins. The conveyor costs about $2,700. Leroy has added additional aluminum channels to increase stability.

The waterwheel was set up for pumpkin transplants. Leroy and his crew transplanted 16 acres (45,000 plants) of pumpkins into roller-crimped winter rye (to roller-crimp, he uses anything heavy enough to kink the rye). One of Leroy’s secrets is to use a little hydrogen peroxide in his transplanter water. It’s hard to fill soil around the new transplant with the rye on the ground, but the foaming action from the peroxide contacting the soil pulls enough soil that the hole is filled within 10 minutes. 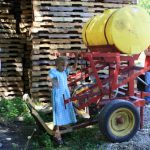 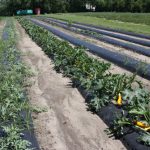 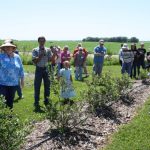 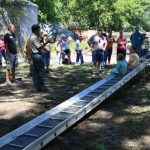 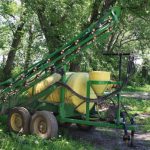 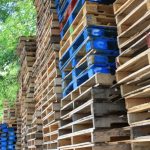 Leroy has had greenhouse tomatoes since 2004. The predominant variety he prefers for the 405 tomatoes in this greenhouse is Scarlet Red. Leroy has had 12 consecutive tomato crops in this greenhouse, but has not had any problems. Like with the strawberries, he knows he is breaking the “rules” or rotation, and is watching his production – and he’s not sure how he’s getting away with it! At the end of each season (October) they take out all the plants, stakes, and ground cover, soak down the ground, rototill, and plant winter rye. In the spring they rototill the rye at about 12 inches and transplant the tomatoes back in. They typically have tomatoes by the middle of June (first of April planting), and keep the high tunnel at about 70 degrees during the night using two 125,000 BTU heaters. His plant spacing is 2 ft in-row, 3 ft between-row, and he trellises using a Florida Weave. 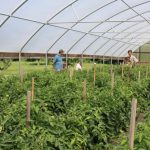 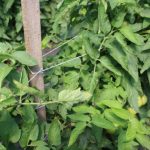 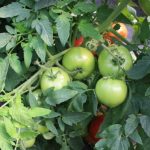 After the tour at Log Cabin Produce, attendees moved two miles down the road to Stillwater Greenhouse, owned by Leroy’s brother, Daniel and his wife, Reba. In addition to the Orchard location, Stillwater sets up seasonal (April – June) satellite stores in Mason City and Cedar Falls. They also still raise vegetables for farmers markets in Cedar Rapids and Des Moines and pop-up farm stands at popular intersections.

Daniel uses an air seeder to germinate solenaceous crops into a 288 cell tray which are then transplanted into 50 cell trays. Melons are hand-seeded into a 72 cell tray, and cabbages are direct seeded into a 50-cell tray. The 288-cell trays are put into the germination chamber for 4-8 days, which uses a hot water element to regulate temperature at about 72 degrees. The germ chambers are also used for germinating seedless watermelon, which require a sustained temperature of 90 degrees for 48 hours. To accommodate larger growers, Daniel is also experimenting with 120-cell trays for peppers.

Daniel had done his own starts for many years, but branched out into the commercial market for vegetable starts six years ago. Now the greenhouse does 80,000-100,000 pepper plants, 20,000 tomatoes and a variety of other crops. They ship to all the neighboring states, and will grow starts from seed sent by the producer or the seed they keep in stock from the larger commercial producers. Daniel uses 80-30 Sungrow Mix for his vegetable starts – the greenhouse uses four semi-loads every year.

All of the flower production at Stillwater Greenhouse is from vegetative cuttings. The flower season starts with geraniums between Christmas and New Years. Flower varieties are often patented by breeders, so all the cuttings must be shipped in, often from overseas. The small, unrooted cuttings are stuck into the soil in a 105-cell tray, set on hot-water coils on benches in a 65 degree greenhouse. Foggers kick on every 10-15 minutes for the first 3-4 days to keep the plants moist until their roots are strong enough to live on their own. They turn the foggers off as soon as possible to limit fungal pressure.

Daniel has found that most of the annuals are easy to propogate, the only troublesome species that come to mind is spunburgia vine. “One thing I’ve learned over the years is that you have to know what your costs are and your overheads – you can’t charge out of your back pocket. We charge for some stuff that I would never buy because it’s expensive, but discretionary income varies so much different areas; we have it – we just need to know how to get it to them if they want it.” For Daniel, the “circus” at Saturday markets are good for them, and pop-up farm stands are effective for finding people where they are on the weekdays. 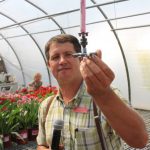 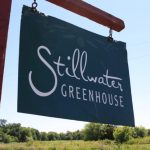 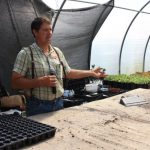 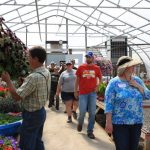 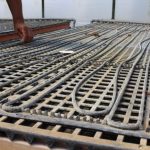 Thanks again to Healthy Harvest of North Iowa for sponsoring this event!