A tribute to landowners and their community 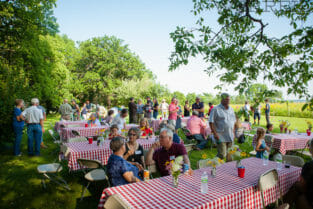 Photo courtesy of James Worrell – For more photos from the event and from Iowa taken by James Worrell, visit http://www.jamesworrell.net/iowa

One hundred thirty people joined together July 16 at Danamere Farms in Carlisle to celebrate Rob and Susan Fleming’s hard work that earned them Practical Farmers’ 2016 Farmland Owner Award. The goals of this award are two-fold:

To call attention to the need for greater landowner partnerships with farmers. Any non-operator landowner – which is someone who owns land but does not labor on that land – is eligible. 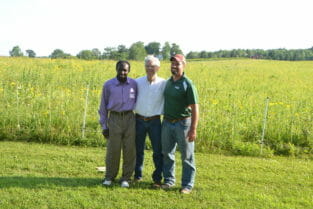 For more on the Flemings receiving this award click here.

The afternoon was what you hope for a summer event: warm but not hot, a slight breeze with blue skies and fluffy clouds. The afternoon started with self-guided tours of Danamere Farms that wonderfully illustrated why the board of directors chose the Flemings for this year’s award recipients. 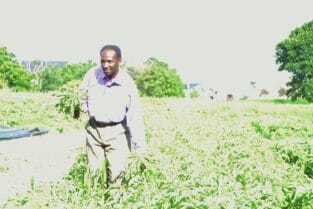 People wandered through Alex Congera and his family’s two-acre fenced vegetable field and learned how the Congeras are raising and preparing familiar vegetables, as well as vegetables less familiar to many U.S. citizens from Alex’s Burundi heritage. This spring the Flemings rented two acres to Alex. They also paid to install an electric deer fence on this heavily wooded farm property and Rob installed the fence—a heavy-duty job.

Global Greens, a refugee incubator farm where Alex raised vegetables before renting land from the Flemings, is having a farm tour and potluck Thursday, August 4. For more details click here. If 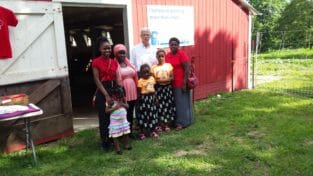 you would like to get a chance to taste some wonderful dishes grown and prepared by refugee farmers, this is an excellent opportunity. Here is what former PFI staffer Tomoko Ogawa said of a Global Greens potluck she attended in 2014:  “It was one of the most exciting potluck lines I’d seen, with smothered greens in abundance including amaranth leaves, squash leaves, and bean leaves. They were all very delicious of course.” 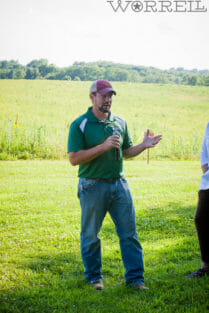 The Flemings have restored part of of their 100-acre farm to native savanna and prairie. Stop two on the tour allowed visitors to appreciate the beauty of this restoration. Aaron White talked with attendees about the functionality of the prairie. Aaron teaches middle school in Carlisle and farms in the community. Rob got in touch with him through Practical Farmers’ Find a Farmer website, and now Aaron leases savanna and prairie ground from the Fleming family to contract graze cow-calf pairs.

Rob has spent much energy lovingly restoring these acres to savanna and prairie. He has neighbors and friends who regularly help, including Dr. Denny Woodruff (he also played a big role in the bike trail—see stop 3), John Paul Williams and Carter Johnson.

The third stop showed off the newly constructed 1.5 mile paved bike trail. Rob and Susan donated land in easement to the city of Carlisle to construct the trail. With RDG Planning and Design and McClure Engineering they 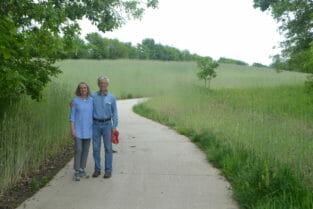 thoughtfully crafted the trail so users could enjoy the restored savanna and prairie, a farm pond and other beautifully scenery saturating Danamere Farms. Rob said, “I’m happy to see this accomplished as my parents were both deeply involved in this trail planning before they died.”

Danamere Farms was coined by Rob’s Danish grandpa as a combination of Denmark (spelled Danmark in Danish) and America. Rob’s family moved onto the farm in 1950 and Rob lived there for the rest of his childhood. He moved to the East Coast after high school. Susan grew up in New York City and Cleveland. Rob and Susan currently live in Philadelphia and spend about one-third of the year at Danamere Farms. 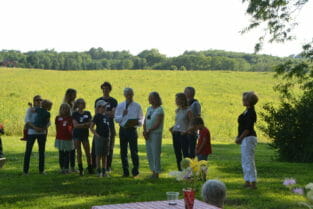 Both of Rob’s parents, Ann (Henry Wallace’s niece) and Bob Fleming, worked hard to advance community, agriculture and environmental issues. Rob: “Dad was focused on the community of Carlisle. He worked with the Hubbell board to help steer building development in Carlisle. He worked to get new home designs in Carlisle with narrower streets, denser buildings and more green space.” The Hubbell development across the street is one-third restored prairie as a result. Ann was Henry Wallace’s great-granddaughter and had a lifelong passion for farming, the environment, and social justice.  She operated a tree nursery on the farm, served as founding board member for Iowa Natural Heritage Foundation, and spent significant time helping many charities achieve their goals throughout her life.

After Rob’s mom passed away in 2012, Rob and his brothers Jim and Erik worked with the staff of Iowa Natural Heritage Foundation to create a long-term plan and vision for the farm. With INHF and other stakeholders, they came up with priorities of: natural history education, farm to school, prairie and savanna restoration, recreation, and working lands.

As they identified goals for the farm, Rob realized he wasn’t ready to let the farm leave the family. He said, “I’m in love with the place I grew up on. I’m so interested in the place and what it could be.” Rob and Susan purchased Rob’s brothers’ shares of the 100-acre property and started working toward their farm goals. 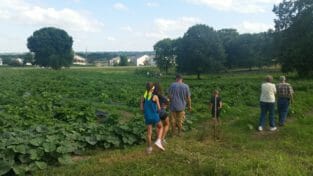 “I have fantasized about conservation of place ever since grad school in the 1970s,” said Rob. “This farm has a unique natural environment, including engendered oak savanna, and a beautiful, diverse, and now rare plant and animal community.”

Rob has made progress on many of his goals and is energized about work to come. He hopes the Carlisle Middle School, literally next door, will become excited about the potential for the farm to serve as outdoor classroom. Rob said, “A now retired teacher used to bring children over to learn and explore, and I would like to revive that relationship and expand it to include nutrition education and hands-on experience growing things. There’s so much potential for education, from food to ecology.” 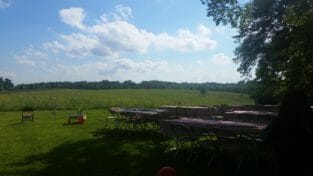 In his book Good to Great, Jim Collins identifies great leaders as those who “look out the window to apportion credit to factors outside themselves when things go well.” Rob did this exact thing during his and Susan’s award acceptance. He iterated it took many to accomplish what has been done at Danamere Farms, and dedicated his acceptance speech to acknowledging those who helped. Here is a list Rob provided of those who helped make Danamere Farms what it is today: 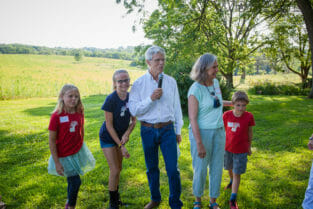 Rob, Susan and three of their grandkids
Photo courtesy of James Worrell