Susan Jutz bought her farm, ZJ Farm, in the hills outside Solon on April Fools Day, 1994. She wanted to grow food for people, despite the skepticism of her neighbors. For the next 20 years, she proved them wrong, building a strong farm and community of workers, volunteers and CSA members who called Local Harvest CSA their farm. In 2016, Susan sold the farm and business to Carmen Black. Carmen grew up nearby, was friends with Susan’s children and had Susan as a 4-H leader. She worked on the farm during high school, and then again after moving back to Iowa after college and work with Food Corps.

A central discussion at each stop during the field day was the pest management routine for different crops. Carmen tries to walk the farm, alone and uninterrupted, once a week to scout for pest and disease issues. She also educates her workers about pests and talks with them about what they saw while working or harvesting. “It’s impossible for one person to see everything,” she said.  This handout summarizes Sundog Farm’s organic pest management practices. 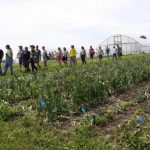 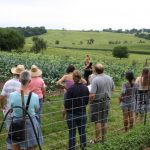 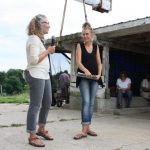 Carmen has her fall CSA started in the greenhouse. They use a soil blocker to do their starts. Detailed information about Susan’s seed-starting process can be seen in this PFI farminar Susan presented in Feb. 2016. 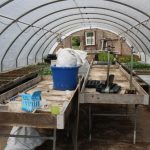 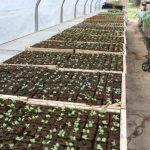 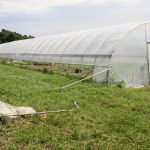 In their onions, Carmen suspects they have thrips. However, because it doesn’t seem to affect the production, they are not currently spraying for thrips. 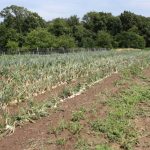 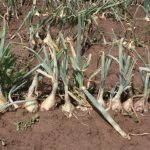 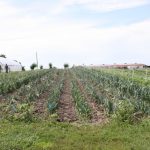 Tomatoes are planted in plastic mulch, but instead of using rye mulch between the rows, they use a reusable row cover to help reduce blight (by protecting the leaves from soil splash). It also makes harvest easier and more enjoyable for the workers. “Over the years, this is the system that has kept our workers and volunteers happy. You can bring a wagon through, harvest directly into  the crates. It reduces handling and saves your back.” Several years Susan tried a living mulch. However, when mowing the cover, the action of the mower throwing clippings against the plants made micro-tears that allowed disease to move in. Their current system with the double cages, plastic, and row cover has been very successful. Tomatoes is one of the biggest set-ups and take-downs every year, but once up, is very low maintenance. 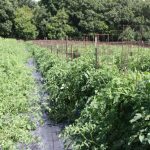 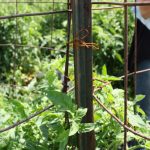 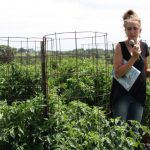 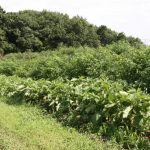 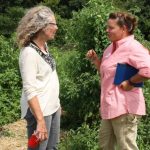 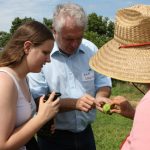 Among the peppers, chard, basil, and melons, Carmen uses black plastic with drip tape on the rows and straw mulch between the rows. 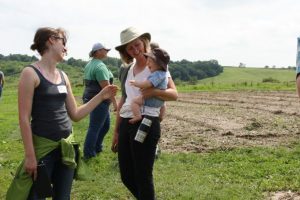 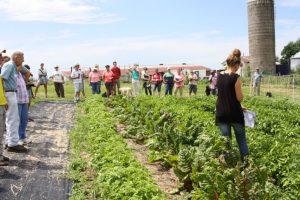 After the field tour, Carmen and Susan shared their farm transition story. Susan has four children who all grew up working on the farm. In 2011, she realized she couldn’t manage the farm on her own, without the kids. She wanted the business to continue, and none of her children were interested in farming as a career. She slowly began looking for someone to take over, managing both the community built around the farm and the farm itself. Just as she got serious about looking for this person, Carmen showed up. In the summer of 2013 Susan told Carmen that she was retiring in 2015, and to think about taking over the farm. In 2014 Carmen began working on the farm full-time. In 2015, Carmen moved into the farmhouse and they began the transition, including Susan mentoring Carmen in every aspect of the business through a full growing season and working together through the logistics of the sale. They both had to be very clear about what they needed; Susan needed money to retire, and Carmen needed a mentor and support to while taking over the farm. After many meetings and discussions with bankers, lawyers, appraisers, family and each other, the sale was final in June, 2016. 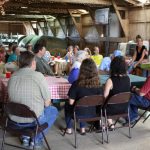 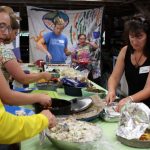 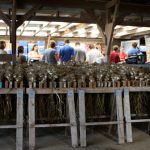 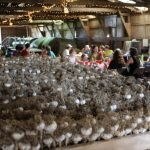 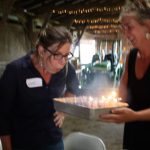 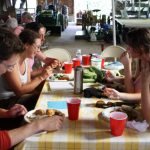