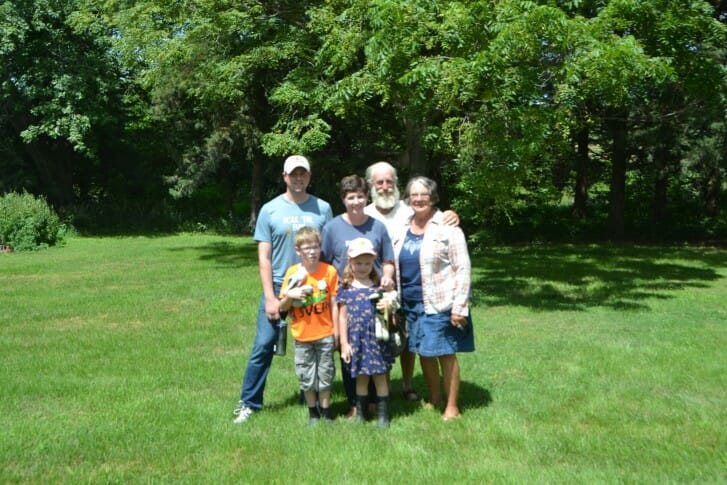 Jeremy Hall, Amber Mohr, Larry Harris and Denise O’Brien, with Jeremy and Amber’s kids Ernie and Lenora (Walden was in taking a nap).

From Mentorship to Partnership

Having grown up visiting her grandparent’s farm in Avoca, there was always a soft spot in Amber Mohr’s heart not only for farm life, but for life on that farm. Her grandparents raised chickens, beef cattle, had a 3 to 4 year crop rotation and even a grade B dairy for several years; it was a true diversified family farm. So when the time came to consider the future of the farm, Amber and her husband Jeremy Hall decided they wanted to continue the legacy.

“When my father thought about selling the home property but keeping the land, we talked about that decision for our family, for the farm, and for Iowa.” Amber and Jeremy discussed the potential of packing up their life in Nebraska to come to Iowa and take over the farm, keeping it in the family and maintaining it as a family farm. Being self-described “risk-adverse” people, they formulated a plan that included Jeremy retaining off-farm income as a freelance editor. “So we left a very happy life in Lincoln, and we came here to another really happy life. And we’re glad to be here,” Amber said with tears in her eyes.

So Amber, Jeremy and their three children, moved in to her grandparents farmhouse prior to the 2014 growing season. Around this time Amber read about the Women Food and Agriculture Network in The Practical Farmer, advertising the Harvesting Our Potential program. It was through this 8 to 10 week mentorship program that Amber met Denise O’Brien, co-founder of WFAN and owner/operator at Rolling Acres, who happened to live just 20 minutes down the road from them.

“The day in February when Amber came over to do a face-to-face, our mentorship was just going to be over the phone, maybe meeting a couple months through the year, but after a half hour of having Amber in my barn, it was like ‘I want this woman now, and full time,’” said Denise about Amber. “It was obvious to me from meeting her that she was somebody who would be really good to have as an addition to our farm, and to be able to teach. She was really open to learning.”

During this first year that they met, Denise was just starting a new CSA venture with a market in Omaha. Having been CSA members of a farm in Lincoln, Amber and Jeremy had already decided the challenges of running a CSA would be too much for them to take on alone. But after meeting Denise and establishing a relationship, the potential for a collaborative CSA seemed to be a great fit. So in addition to Amber working as an employee at Rolling Acres, she began growing crops for the CSA at her home, Fork Tail Farms.

“With Denise having experience running a CSA in 2003 to 2006, and ready to go back into it, we thought we can contribute.” For the first year of collaboration, they chose for Amber to grow green beans and provide eggs, which Denise purchased from Amber at market price. She described it as a situation with low expectations, but with the satisfaction that her product was going somewhere. Over the second and now into their third year, Fork Tail Farm has been able to pick up a few more crops and responsibility, allowing Larry and Denise the chance to take some time off during the growing season.

The field day started out on a beautiful Saturday afternoon at Amber and Jeremy’s farm, Fork Tail Farm near Avoca, Iowa. Here we heard from them about the history of the farm and the history of their relationship with Denise, followed by a farm tour. 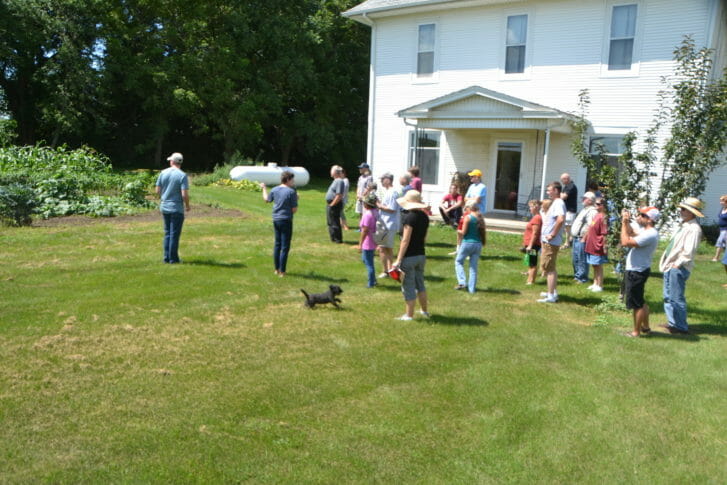 In addition to providing a few crops for the Rolling Acres CSA, Amber still works one day a week with Denise and has also taken a job in Avoca as the director of a Main Street program. Jeremy works full-time as an editor and they also raise three kids under the age of 9, so they definitely stay busy. All of these factors went in to the decision to grow crops like green beans, squash and peas—crops that allow them the flexibility to come and go as family and work responsibilities pop up. Amber explained that growing something like lettuce would not allow her to stop mid-harvest to tend to the kids.

Another thing they discussed was the desire to connect with their customer base. They interact with their CSA members and value their relationship—which is reflected in the 80% retention rate from year-to-year.

A couple of final pieces of advice from Amber and Jeremy was to keep track of what you’ve been doing so you can assess your situation before scaling up, and also to utilize whatever advantages you have. Their advantage is Amber’s family farm, and Jeremy reminded the audience to find what their advantage is and to exploit that.

Field day attendees then caravanned 20 miles down the interstate to Rolling Acres Farm, where Denise has been farming with her husband Larry Harris for 40 years. Larry actually grew up on the 17 acre farm, and Denise joined him after they met in 1975. She told the story of how they met, painting us a picture of Larry riding his horse bareback, shirtless with cutoff shorts and his long hair flowing in the wind. When he told Denise of his plans to be an organic farmer, she was sold, joking to us: “How could you not fall in love with something like that?” 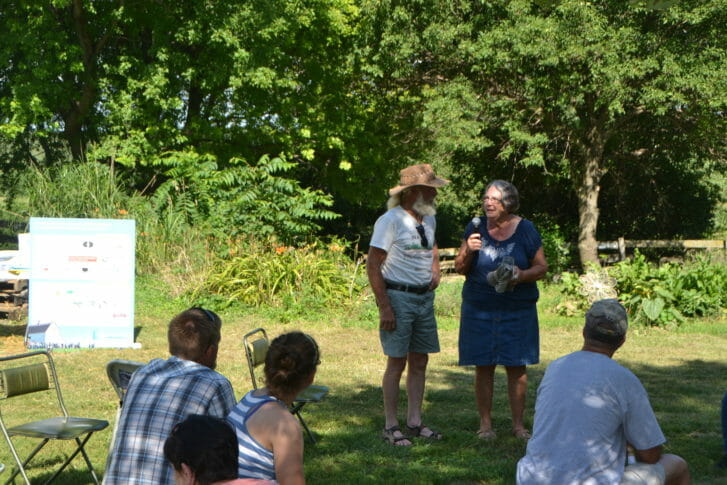 So Denise joined him in his alternative farming venture: “We started farming way differently than other people in the neighborhood. And it never occurred to me how brave that was of Larry. The trend was to use all the modern progressive stuff, chemicals and fertilizers.” Over the years Rolling Acres has been through many transitions and enterprises, including a cow/calf operation, row crops, an apple orchard and strawberry patch, keeping hogs and running a 55-cow dairy before the current vegetable enterprises.

Also throughout the history of Rolling Acres, Denise and Larry have taken on many interns and mentees through both the Women Food and Agriculture Network and also PFI’s Labor4Learning program. Denise and Amber listed off a few of the qualities that help a mentee get the most out of a mentorship, including being flexible and patient, and to contribute whatever skills you can bring to the table. “It’s a two way street, I’ve learned so much from Amber too.” Larry jokingly added that it helps to be a hard worker, as well.

The day continued with a tour of Rolling Acres, including an 80 foot greenhouse they recently purchased on Craig’s List for $1,000, tables and all. Forty foot was erected at Rolling Acres, and 40 foot is going to Fork Tail. We toured through their production plots and saw strips of vegetables alongside strips of cover crops. I tried to keep a list of cover crop varieties being grown on the farm, which includes but is not limited to buckwheat, sunhemp, cowpeas, radish, oats, rye and Japanese millet. And no trip to Rolling Acres is complete without a tour of their 76’ x 30’ moveable v-track high tunnel. It was full of crops but they were prepping the bed next to it to plant carrots, beets and kale to move over in mid-October.

The field tour concluded with a demonstration from neighbor and equipment whiz Kent Morris, who had a variety of horticultural tools and implements on display. Kent enjoys spending his time tinkering with old tractors and implements that might better serve small-to-medium scale vegetable producers, and he had some really neat projects to show off, including an old Farmall Cub (he estimates could be found for maybe $1,200) equipped with four Earthway precision garden seeders (which run for about $100 each, brand new). On the back of that same Cub, Kent has a flame weeder rigged up that we discussed being used in various situations.

Kent provided a handout listing additional online resources for attendees to peruse on their own, but also mentioned that he’s happy to chat with anyone about equipment possibilities (his contact info is on the handout). 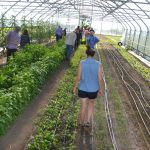 The field day finally came to a close over a fantastic meal provided by the hosts, including brats and hotdogs generously donated by Niman Ranch. In addition to our hosts and all the attendees, Practical Farmers would like to thank our major sponsors as well as Niman Ranch, the Sustainable Iowa Land Trust, and the Iowa Farmers Union for sponsoring this field day.