Field day recap: From a Soil Conservation to a Soil Regeneration Mindset

It was a few years ago that Jon Bakehouse decided that what they were doing at Maple Edge Farm near Hastings in Mills County was not enough. “We realized that no-till corn and soybeans were doing a pretty good job at soil conservation,” Jon says. “But what good is that if we’re conserving a degraded resource?” It was then that Jon thought about building and regenerating soil on the farm. 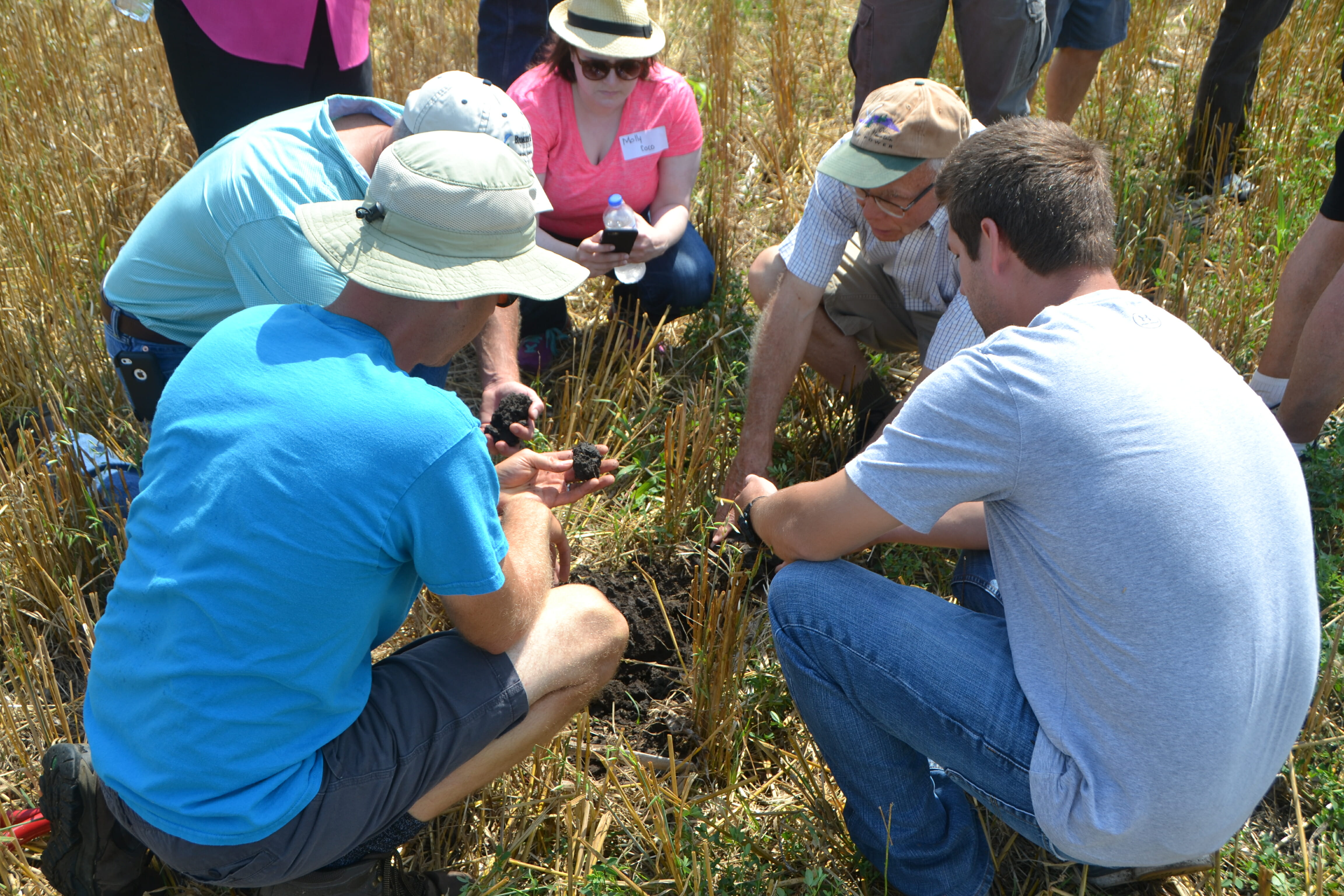 Jon Bakehouse (in blue shirt) and field day attendees inspect the soil beneath a cover crop mix following an oat crop on July 27 near Hastings, IA in Mills County.

Jon started the field day by sharing a story about walking through corn stubble on an unseasonably warm December day a few years ago. The wind picked up and Jon could see clouds of soil blowing across the field. That’s the moment Jon realized that they needed to do more to conserve and ultimately improve the soil on their farm.

Under-girdling much of Jon’s themes for the day was a care for others–both immediate neighbors as well as those downstream all the way to the Gulf of Mexico. The soil Jon saw blowing that December day was leaving their farm and settling elsewhere. Likewise, a lack of roots in the ground during the crop “off season” leaves nutrients in the soil vulnerable to leaching into waterways. Jon resolved to no longer stand idly by and allow these kinds of things to happen on the farm. Five or six years ago, they began using cover crops like cereal rye and then extended their corn and soybean rotation to include small grains like triticale or oats. As time went by, these practices weren’t quite “enough” and Jon began to push the envelope further towards increasing the diversity on the farm, citing influences like Gabe Brown from Bismarck, North Dakota. “Agriculture in this state is under the microscope right now,” Jon stated. “And the best way to rectify a lot of the bad things concerning soil and water quality is to keep living roots in the ground.”

Our first stop on the farm tour for the day showcased something new Jon tried this spring. Influenced by what nearby PFI farmers Chris Teachout and Steve McGrew have tried, Jon seeded a mix of oats, peas, flax and yellow clover in early March ahead of a soybean crop. The idea is to establish a 40-day cover crop mix early in the spring ahead of soybeans planted in May–particularly if you weren’t able to plant a cover crop following corn harvest the previous fall. As a bit of an “experiment,” as Jon told the group, he decided to leave a strip of this cover crop mix instead of terminating before planting to soybeans. The flax and the peas mostly withered with the summer heat, but Jon did harvest oat grain and straw in mid-July. What remained in the strip was the yellow clover which should make a fine “green manure” ahead of next year’s corn crop in that field. Jon and Chris Teachout each brought spades to the field and dug up some soil and roots. Chris showed an extensive root system on the yellow clover and noted a number of nodules that had formed on the roots. The nodules are a sign of atmospheric nitrogen fixation taking place–with the help of soil microbes, the yellow clover is fixing nitrogen gas from the air to use for its growth rather than just using the nitrogen in the soil. This “addition” of nitrogen to the soil by a legume (yellow clover in this instance) represents one of the values of using a small grain (oats) in a crop rotation: the opportunity to establish a legume green manure cover crop. 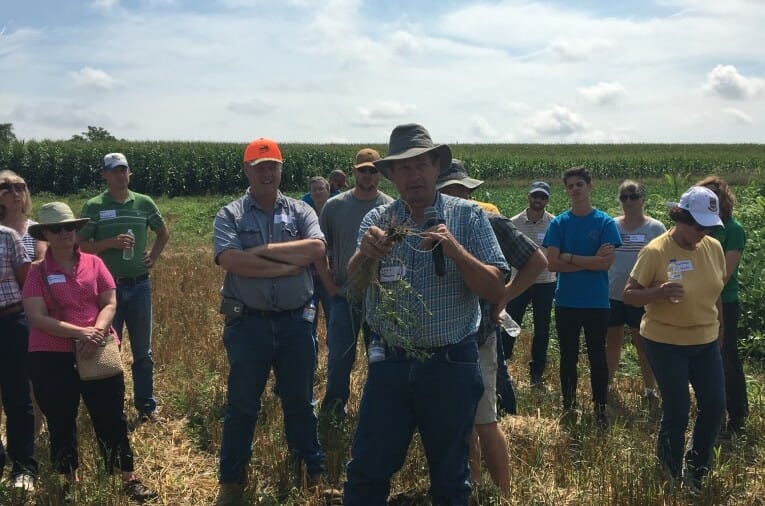 Chris Teachout, who farms nearby in Fremont County, dug up some of the yellow clover to show the nodules on the roots responsible for atmospheric nitrogen fixation.

We next stopped at a soybean field that is involved in a PFI Cooperators’ Program strip trial. In another attempt to increase diversity on the farm, Jon is trying short-season varieties of corn and soybeans to accommodate cover crops. The way Jon sees it, if he can harvest corn and soybeans a little earlier than he normally would, he could give cover crops more time to establish in the fall before the onset of a hard freeze. And with more time to establish, reap the attendant benefits of more biomass production, namely erosion control. After harvesting 104-day corn late last September, Jon drilled a cereal rye cover crop on October 2. By mid-May this year, that rye put on 7.5 tons of biomass per acre by the time it came to plant soybeans. The rye was chest-high on farmhand Cameron Prouse (6’6″) when they planted soybeans!

By the time of the field day on July 27, the soybeans were fully canopied and with a thick layer of rye mulch in the interrows. Jon shared that compared to other soybeans on the farm, any weeds were far behind and much smaller. These “younger” weeds were far more susceptible to chemical control when Jon’s dad, Bach, made their post-emergence spray pass through the field. When we viewed the field at the field day, the soybeans looked remarkably healthy and clean.

Jon has previously mentioned to me how he can “hear the bare soil groan” on hot windy days. In an effort to document this, Jon took some soil temperature readings in mid-July from a few different settings: bare soil, no-till soil and no-till + cover crop soil. He shared these with the group that day:

“I know where I’d rather be,” Jon quipped after reading those temperatures. He was referring to the soil microbes responsible for turning soil organic matter into nutrients for plant growth–they are most active when temperature and moisture conditions are not too high or too low.

Soil regeneration is a long-term journey

Jon invited Dr. Jay Leighter, director of the Sustainabilities Studies Program at Creighton University, to speak at the field day about his research into rural communities grappling with and communicating about the notion of sustainability. Jay told the group that this generally boils down to how communities come together and make decisions on various levels that effect those that make up the community. When it comes to stressors acting upon communities, Jay has found that communities address these stressors along a progression from mitigating the stress to adapting to the stress to being resilient in the face of the stress to ultimately being sustainable no matter what the stress.

This progression that Jay described very much mirrored the efforts undertaken by Jon to move from soil conservation to soil regeneration on Maple Edge Farm the past few years: From mitigating and adapting to soil loss first with no-till and then adding cover crops, to becoming more resilient by building soil with diversity on the path towards sustainability. 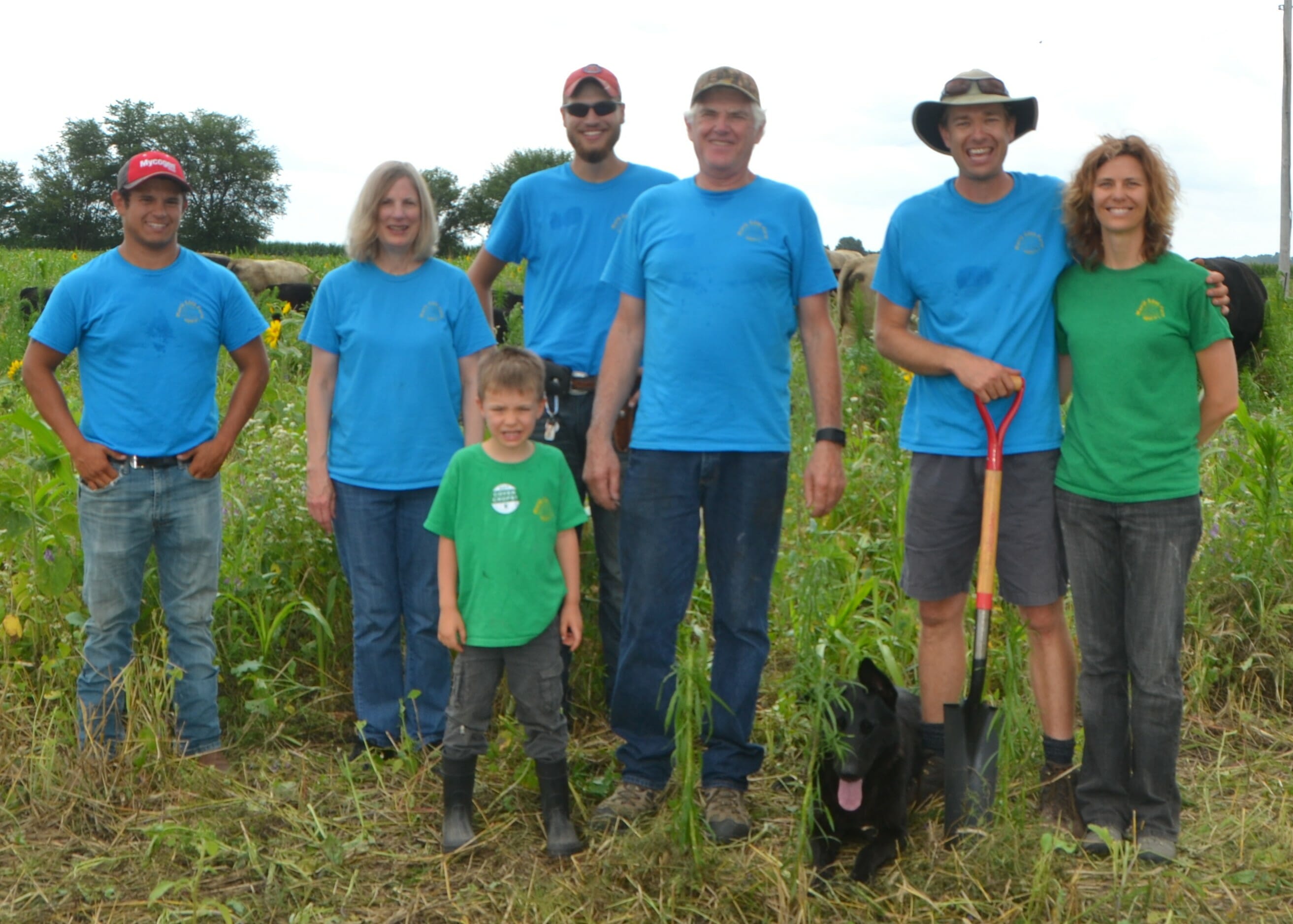 We’d like to thank HTS Ag and Green Cover Seed for sponsoring and making this field day possible.