Field Day Recap: On-Farm Research and Pollinator Habitat at One Step at a Time Gardens

Since joining Practical Farmers of Iowa in 1999, Jan Libbey and Tim Landgraf have participated in 15 on-farm research trials. The importance of on-farm research for farm profitability was the center feature of their field day on August 14 in Kanahwa. Said Jan, “Partnerships we’ve found through PFI have a lot to do with the success we’ve found on this farm.” This year, Jan is participating in Year 2 of the Cucumber Enterprise Budget, while Tim is working on a variety trial of Determinate Tomatoes in the High Tunnel. 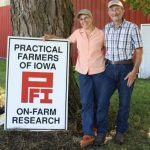 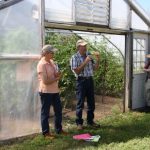 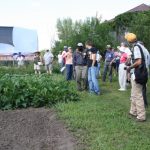 The Cooperators’ Program is a pillar of PFI’s mission. But for people who aren’t involved in the research, the process is somewhat invisible. Generally, here’s how it works: In December, growers interested in doing research (being part of the Cooperators’ Program) attend the Cooperators’ Meeting, which is held in Ames. At this meeting, farmers present on the research they did over the last year, read research reports and listen to others’ results. They then share their questions to investigate next year, discuss which projects should move forward, and begin designing the on-farm trials. Then, as Jan puts it… some time passes (PFI staff calls this the Annual Conference). In February and March PFI staff begin sending out research protocols and checking in with farmers about their plans to do various projects. Then we’re on the ground and running, usually with some back-and-forth to fine-tune details of data collection or plot configuration.

Jan gave some background on the beginning of their research work with PFI. “Back in 1999 we did a project that involved economic analysis of our CSA. This analysis showed us that we weren’t too far off from where we needed to be. Three years later Tim quit his full-time off-farm job and we went to full-time farming. We made that decision, in part, because of the research.” 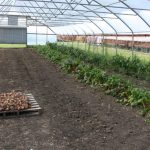 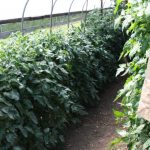 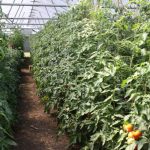 Tim and Jan also participated in a whole farm energy analysis and then a more targeted analysis of their walk-in cooler. The cooler is their biggest energy consumer on the farm. With Rich Schuler, an energy consultant with PFI, they monitored temperatures in different areas of the cooler throughout the day, and the year. The findings led them to make changes to the operation of the cooler fans and they painted the outside of the cooler bright white (it had been silver).

Jan has also used the PFI research model to do enterprise budgets with growers in Healthy Harvest of North Iowa. The enterprise budget workbook Jan created was then used in Cucumber Enterprise Budget Analysis with other PFI members. For Jan and Tim, the partnership in research – both with PFI and other farmers – makes the work more impactful. “None of us are asking these questions in isolation; we are asking these questions together. And we could put projects together in a way that still honors each of our farming systems. There is some real thought into how these projects are put together.” Tim noted that in addition to the cucumber enterprise budget project, the bell pepper variety trial (5 farms) provided great discussion, and the three years of the Yield Data Collection project helped create the first-ever baseline values for many fruit and vegetables in the Non-Insured Crop Disaster Assistance Program (NAP).

Jan and Tim took attendees on a tour of their fields and high tunnels, and answered questions ranging from deer fencing to crop rotation. A lengthier discussion on their pollinator areas was planned, but due to a family emergency their NRCS partner could not attend. His handouts about on-farm pollinators are available here and here. The field day ended with conversation around the picnic tables and a tomato tasting popularity contest… to the surprise of many, Mountain Fresh won! 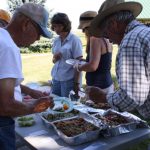 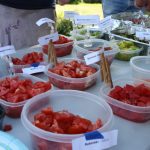 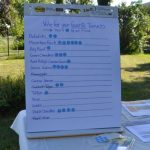 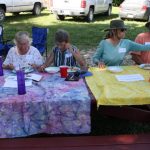 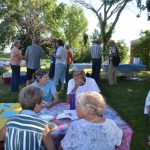