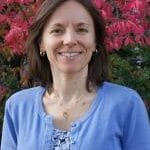 We’ve been having a lively discussion on the PFI cover crops email discussion list about sudden death syndrome (SDS) in soybeans and whether cover crops may be reducing incidence of this disease. I reached out to Dr. Leonor Leandro, ISU Plant Pathology and Microbiology, who studies SDS in Iowa, to see if she had anything to share on the subject and whether early senescence of soybeans is often mis-diagnosed as SDS. Below I share her responses on this issue.

There have been some interesting observations this year with soybeans staying greener in areas or plots that were preceded by a rye cover crop. It is not really clear to me if this is related to an effect on SDS though. This late in the season it is pretty hard to distinguish SDS from early senescence, so we don’t even rate our research plots at this stage. SDS is clearest at or before R6, when the plants are still mostly green but show typical chlorotic and necrotic spots between the veins. Once plants start turning yellow it is hard to determine if SDS was the culprit.

How to Diagnose SDS

One thing that can be done is pull up some roots and split the taproot. Plants infected by SDS will have a brown discoloration of the tap root cortex and you might see some blue spore masses on the root surface. The pith of the stem will remain white. The other suggestion is to look at the distribution of the senescing plants. SDS appears in patches, so if the plots or fields develop a generalized yellowing that is widespread, then I would suspect something else is going on. Tom Kapsar has some trials were we saw early senescence in plots without a rye cover crop while the plants remained green in plots that had rye cover. We could not find SDS symptoms there, so I do think there is some other abiotic factors playing a role.  Tom thought it may have to do with more moisture retention on the cover crop plots since the rye was so high this year.

Having said this, SDS is known to cause premature defoliation so we cant rule out that is might be involved. The best thing would be to have some earlier observations of SDS on the areas that are showing early senescence, to confirm that it was at least involved at the start of the process. We definitely need more research this! I have a couple of students working on the effect of cover crops on soybean disease but we have not been able to detect any effect in the field so far. There is minimal other research out there, except for what Darin Eastburn at the University of Illinois has found.