Many farm conservation practices are proven to protect soil while reducing both the amount of inputs needed and reduce nutrient runoff. However, these conservation practices come with unknowns to those curious about adding them to their farm systems. What are the costs? risks? At Conservation District of Iowa’s annual conference, Practical Farmers of Iowa sponsored a panel where three member farmers (all soil and water commissioners) shared their experiences with the audience in a Myth Busters Panel to debunk commonly perceived downfalls of conservation practices. 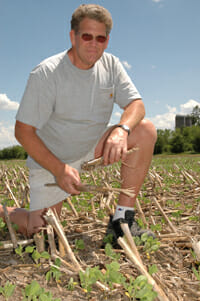 Rick Juchems raises 470 acres of corn and soybeans, and finishes 5,000 hogs annually at his farm in northeast Iowa near Plainfield. Rick started using cover crops in 2003 and now raises cover crops on all his crop acres. Rick spoke about his experience with cover crops on his farm. Rick’s PowerPoint

Rick started his presentation by defining cover crops: “Cover crops are a living crop grown after harvesting a cash crop—cereal rye, oats, wheat…anything that will turn green in fall and protect the soil.”

Rick talked about benefits he is seeing on his farm, including: reduced wind and water erosion; reduced nutrient runoff; reduced fertilizer, herbicide and pesticide rates and costs; increased organic matter and soil health; and weed suppression.

Rick said, “I’m growing bacteria and earthworms and producing a healthier soil. Turkey, quail, and pheasants are returning to my farm. I can now hear pheasants cackle in the morning and evening, which hasn’t happened for a long time.”

Rick shared his application methods: “I fly on rye and radishes before soybeans. I aerial apply most cover crops now. Cereal rye I seed with a drill. Any way you can get seed out there and in contact with the soil, cereal rye will grow. It will grow on rocks if you let it.”

Rick warned that while he is a firm believer in the benefits of cover crops, planting cover crops can produce unexpected results: “Be careful what you plant – according to cover crop experts, rapeseed is supposed to winter kill. Last year rapeseed survived winter and was very prolific, it grew all summer long.”

Rick has experimented with different termination techniques, and has had more consistent results with herbicide termination than with tillage.

Rick is also educating his neighbors. “Last year my cereal rye stood three to four feet tall. The whole field turned gold. I had a lot of neighbors asking what I was doing, how I was going to handle that much mass. It terminated fine, and this season you can’t tell the difference between my field and my neighbors’ field.”

Rick has been participating in cover crop yield studies for eight years. There has been no statistical difference in soybean or corn yields any year, even through dry years (2012) and a hail storm (2014). 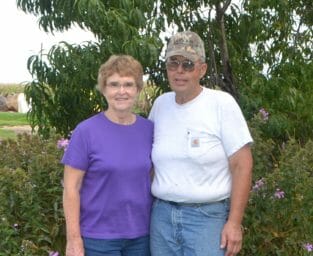 Paul Ackley and his wife Nancy Ackley raise corn, soybeans, wheat and other small grains, cover crops, cattle and sheep on their farm near Bedford in southwest Iowa. He talked about his experience growing small grains. Paul’s PowerPoint

Paul started off showing a soil map illustrating Taylor County’s vulnerability to erosion. As his dad, Lou Ackley said, “Our land is too good to ranch, too poor to farm.” The Ackleys have always been aware their soils are degraded and prone to erosion. Paul said, “Twenty years ago I got dissatisfied with my no-till corn and bean system.  When I started no-till I thought it was the end-all to control erosion. I started to ask some questions: If 80% of my inputs have something to do with fossil fuel, how to I mitigate that? How do I rebuild soil profitably year in and year out? There was a big change I need to make between my ears.”

The Ackley farm motto is now: We rebuild and regenerate soil in a socially acceptable and profitable manner, using cover crops, extended rotations and livestock grazing. 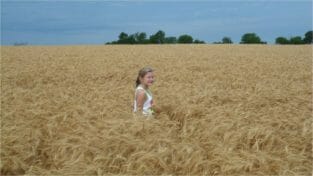 Paul explained small grains schedules and economics on his farm. He showed planting schedules both in and out of sync with nature. Predictably, when planting with mother nature, the economics worked in his favor. Paul planted wheat October 1, 2015 at 110 pounds/acre.

This net does not factor in additional savings Paul receives: “We have another little thing called mother nature’s cash rent. It is difficult to price but priceless.” Attempting to price, Paul estimates $95 per acre savings: 4 tons topsoil saved X $20/ton=$80 + No gullies to fill=$15

He explained some of the small grains learning curves: “We don’t know how to raise wheat so we don’t know how to combine it either. That’s why a lot of people get volunteer wheat.” Over time, though, it has made soil management easier: ““We took off row cleaners and coulters we used for no-till planting.  As Dave Brandt said one night, ‘when your soil gets right, you don’t need all those doo-dads.’”

After talking with Gilmore City farmer Bob Lynch, Paul did a nitrate test last spring. “We got to wondering what the neighbor’s bare corn was losing in nitrates compared to mine. In late April, from tile lines, our farm is in the vicinity of 2 [mg/L]. He’s pushing 50. I can just see those dollars staying in my field and his trickling down the stream.” 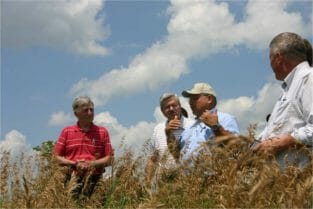 Frederick Martens raises row crops with his dad near Winterset, and presented on his experience with a wetland on his farm. Frederick’s PowerPoint

The Martens installed a wetland in their corn and soybean field 5 years ago. Frederick started out: “What are wetlands? I looked up the definition and got everything from swamp to puddles to prairie potholes. I couldn’t disagree more. My wetland is not a swamp. My wetland serves as a living kidney to clean up the water coming down the stream.”

Frederick farms in Badger Creek Lake Watershed, and Badger Creek is on the on impaired list. Fred said, “My family decided we should do our part in trying to clean up the lake.”

The Martens’ wetland is 12 acres, and the size of the pool ranges from 3 to 5 acres, depending on rainfall. Frederick said, “Our wetland treats 745 acres, most of it tillable ground. Water being treated is coming off of terraces and tile systems.” Martens’ wetland is estimated to remove 800 lbs. of nitrate annually.  Anna McDonald, Badger Creed Lake Watershed project coordinator,  has been testing nitrates going into this watershed, and they are on the decline. Frederick said, “We’re making progress but we’re not there yet. I get self-satisfaction knowing I’m trying to help clean in up.”

Frederick enjoys watching wildlife in his wetland. “Prairie flowers are pretty in the spring. Migrating water fowl love it. Two years ago the snow geese were so thick there wasn’t any open water left. I don’t know how they crowded in, but they did. Pheasants, quail, ducks, turtles, crawfish…so much wildlife finds sanctuary there. We never had migrating ducks until we put in the wetland.”

What about mosquitoes? “To tell you the truth, with all the hours I’ve spent in that area on the farm, I’ve never encountered a mosquito. I think dragonflies have a lot to do with it. Last week I was hauling in hay by the wetland, and I’ve never seen so many dragonflies in my life. They eat about a mosquito a minute when they’re out here. Barn swallows are just thick. Just after sunrise, half hour before sunset, you’re walking in a flock of barn swallows. That’s when they enjoy going down to drink. There are a lot of frogs and other wildlife. It is a living system, mosquitoes have not been a problem.”

Fred and the Martens’ wetland are featured in Incredible Wetlands.

Fred said: “I wholeheartedly recommend you find your creeks. People living by them don’t know their names.” 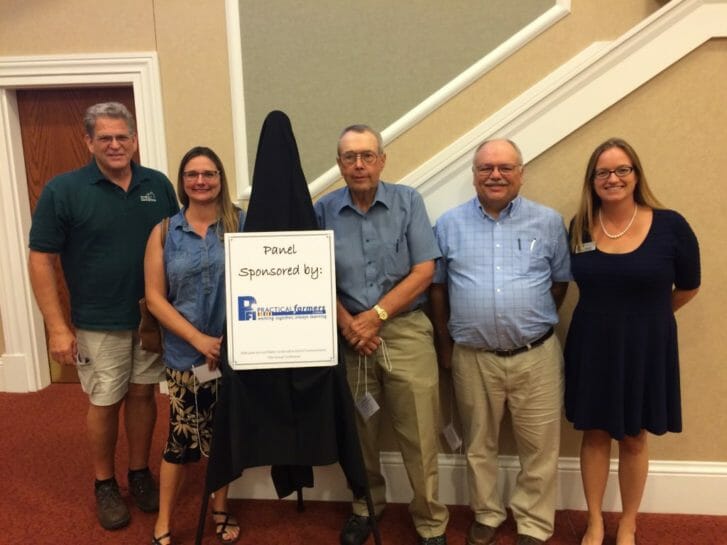 Thank you Conservation Districts of Iowa for including Practical Farmers of Iowa in your conference!
Left to right: Rick Juchems, Sally Worley, Paul Ackley, Frederick Martens, and Clare Lindahl.