PFI joined the Tallgrass Prairie Center (TPC) and Luze Family Farm, near Dysart, for a field day focused on establishing and evaluating prairie strips on farms.  Randy Luze first encountered the Tallgrass Prairie Center in 2011. Randy had experience with cover crops and terraces, but knew more could be done on the farm for conservation. In 2013, when the Nutrient Reduction Strategy came out, Randy began thinking more seriously about what his farm could do. Said Randy, “It will take a number of different farming practices on each individual farm to reach our goals for nutrient reduction.”

Randy has conducted side-by-side trials of tillage/non-tillage, cover crops/non-cover crops in nine different combinations. “None of the data really surprised me,” he said. He lamented the loss of fence rows, which had acted as terraces, “now this section (640 acres) only has about six miles of fence.” Though Randy had read about Iowa State University’s STRIPS project, it was after he saw a presentation about the reduction in soil and nitrogen loss that he became interested in trying something similar. STRIPS research has shown that strategically placing 10% of farmland into prairie strips can reduce soil loss from surface runoff by 90% and nitrogen loss by 85%.   “I thought, I better go talk to those prairie people,” Randy reflected. 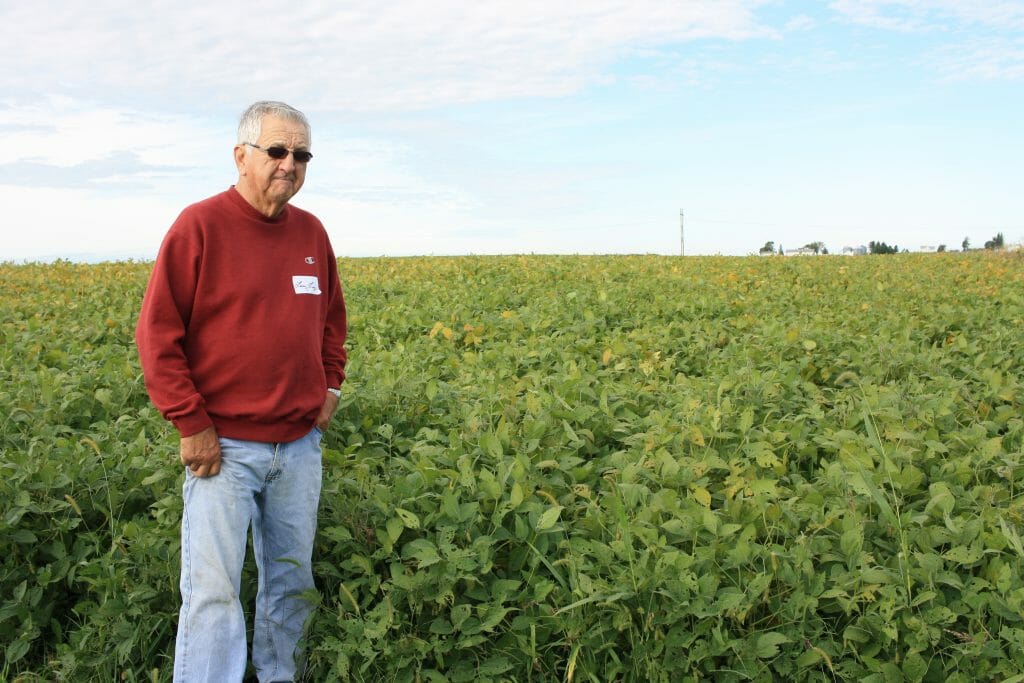 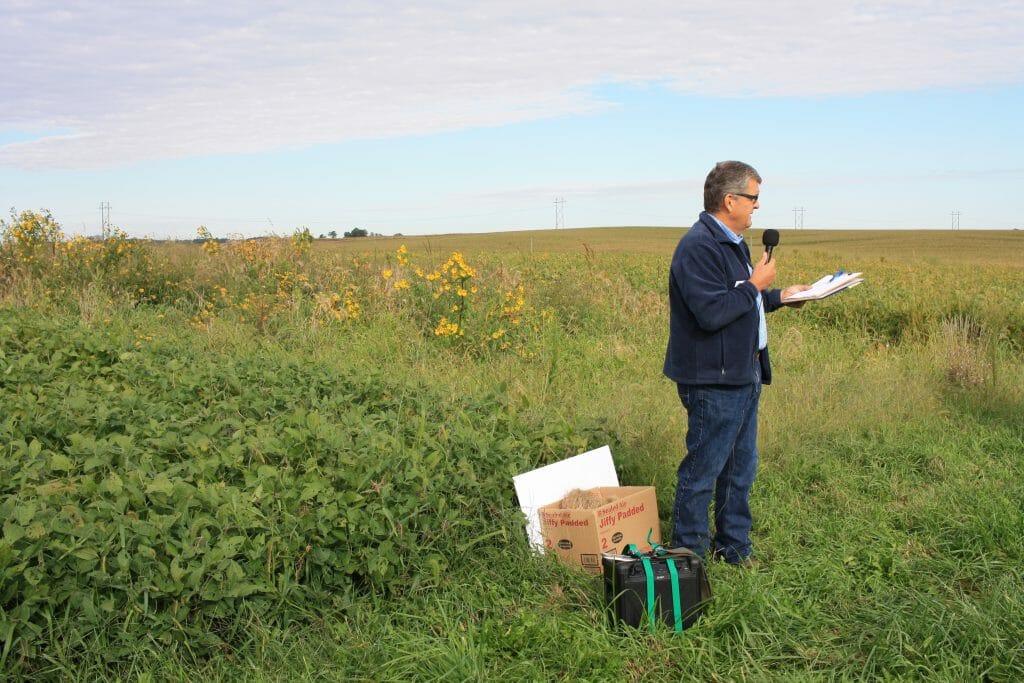 So he began working with his local NRCS in Benton County and the Tallgrass Prairie Center on integrating prairie strips to his family’s farm. Together, they identified places on the farm where prairie would provide the most “bang for the buck.” Randy was concerned about farmability with the strips. Almost all of the strips are arrow straight, 160 ft apart so they are easy to farm between (in another field they are 120 feet apart, right over the top of some old terraces). He is, however, becoming more comfortable with the contour setting on his GPS, to accommodate work in another field with prairie strips. Other questions Randy had at the outset were related to offsetting runoff potential from tillage they do for seed corn production, income comparisons with 10% of the land in CRP, and potential herbicide carry-over that might harm the prairie plantings. He was also worried about trees moving in (they always do in CRP), the prairie spreading into the fields, and knew he would need help with plant identification.

Many of his questions and concerns have been answered, but some will take more time. The initial prairie plantings established very well. They trialed three different seed mixes – a diversity mix put together by TPC, which has 72 species suited to the site; an economy mix, with a grass-to-forb ratio of 3:1; and a pollinator mix similar to CP-42 (the recommendation for CRP pollinator habitat). Each mix was planted in June with an oat nurse crop (a little later than desired). The ground was treated with Prowl and two applications of Round-Up, in preparation for corn (fall fertilizer and nitrogen had also been applied). The strips were laid out in April; corn was planted, skipping the prairie strip areas. Just before prairie seeding in June, Randy cultivated in the strips to remove any new weeds and provide a nice seedbed. The Luze’s spray their own herbicides, so they were very patient for good spraying conditions and haven’t had any issues with drift. 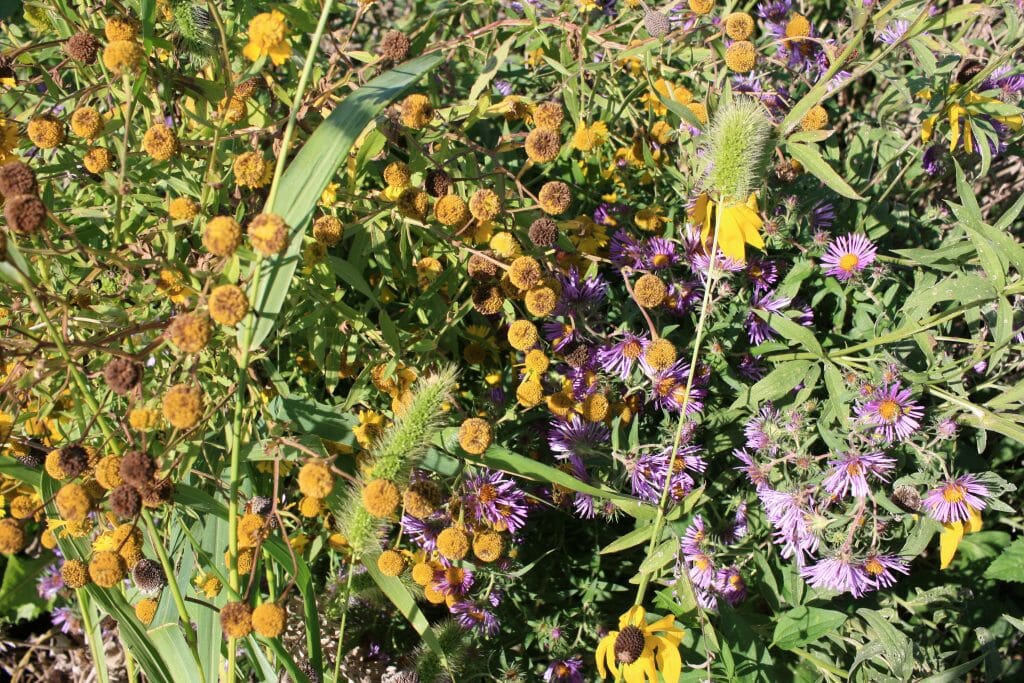 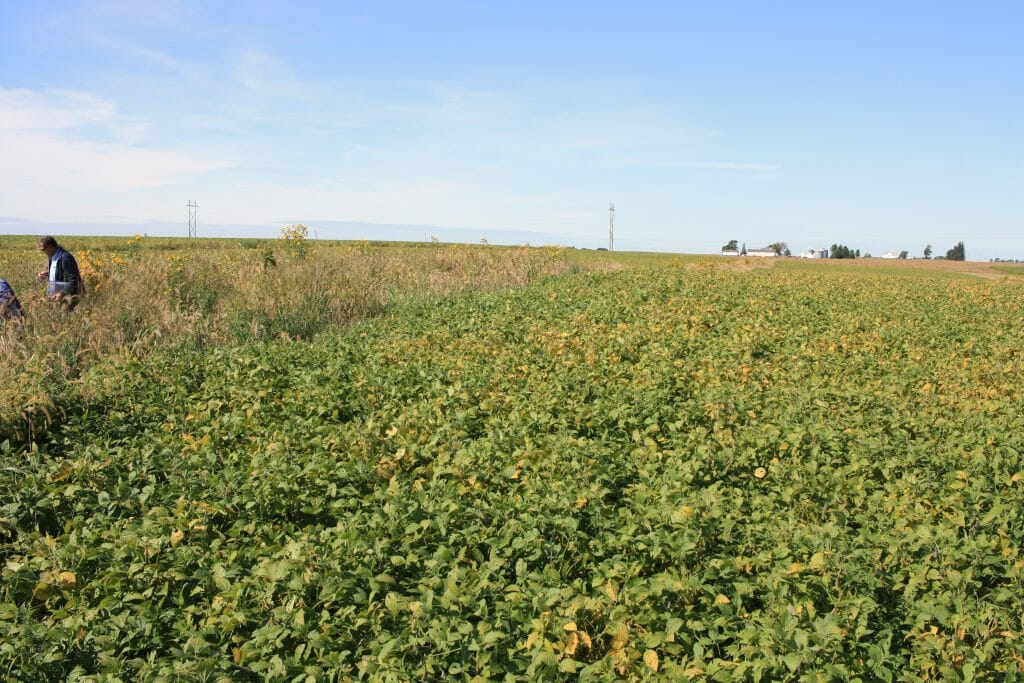 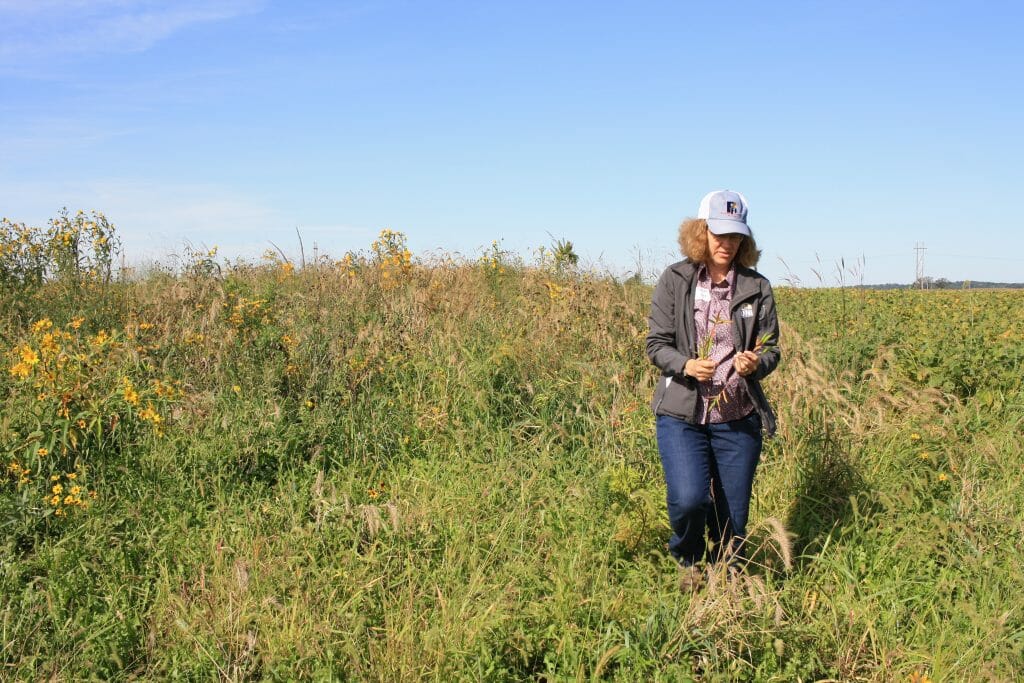 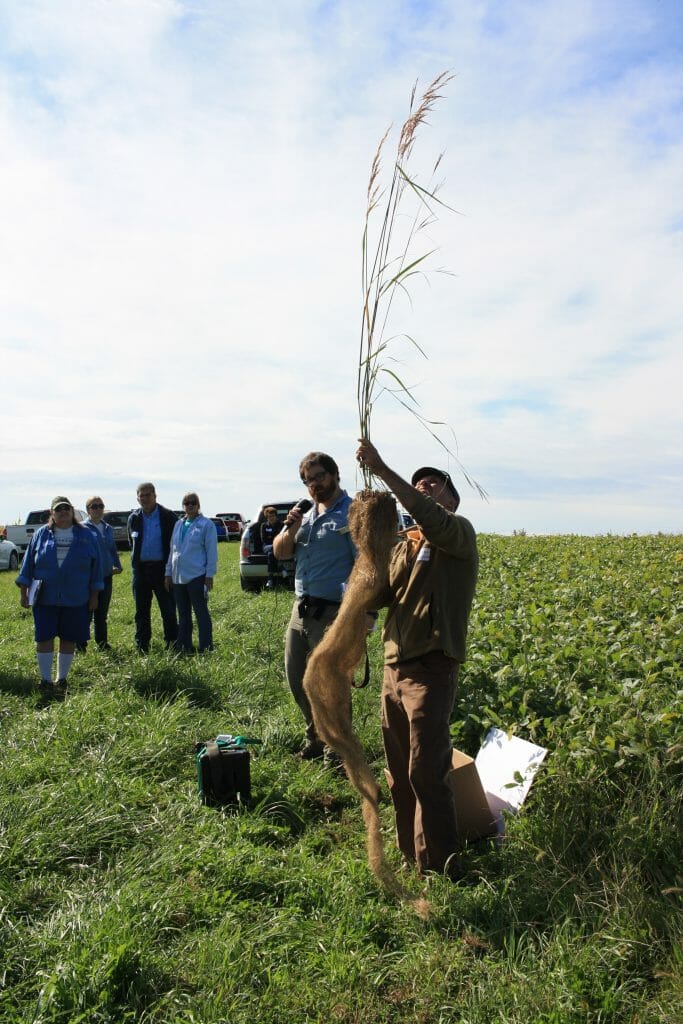 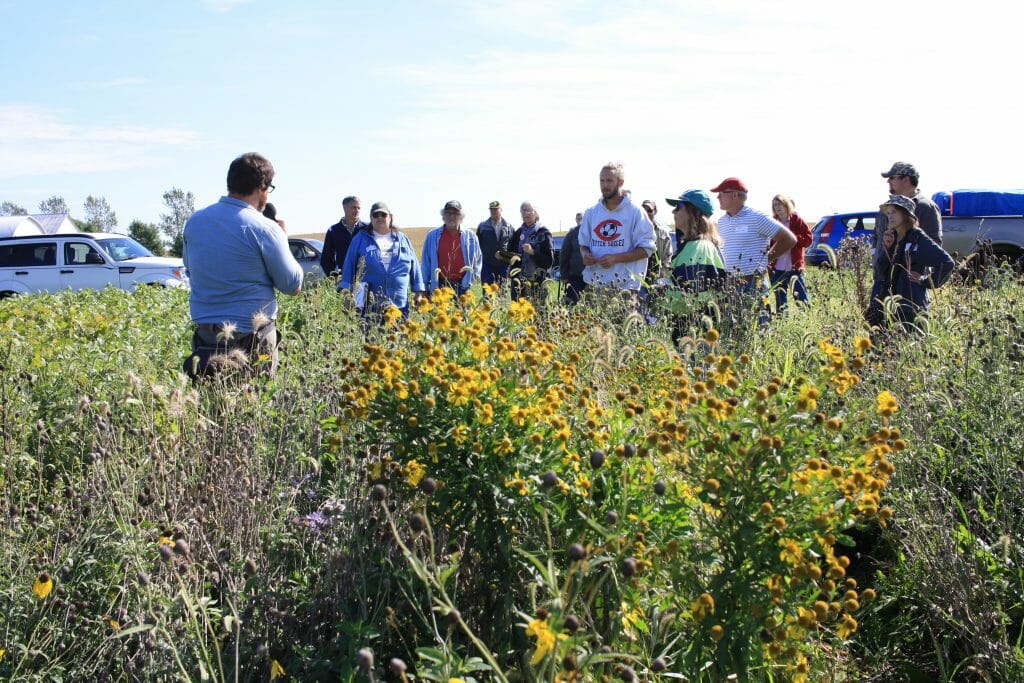 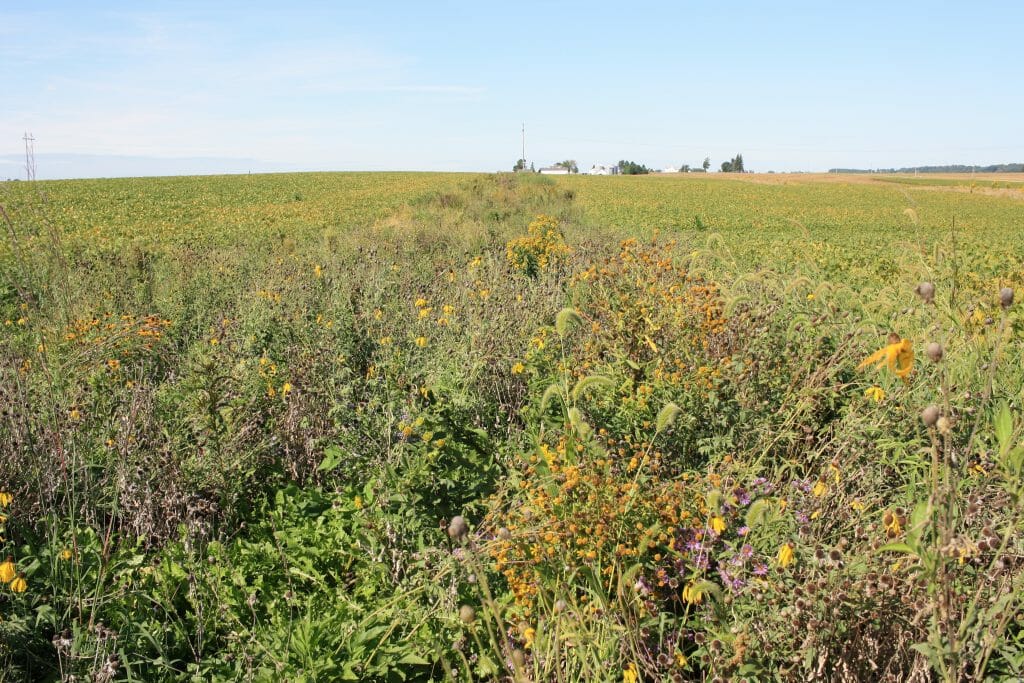 Now in the second year of growth, TPC did evaluations of the abundance and diversity of plants in each mix. The diversity mix was the most cost-effective for pollinator habitat. Looking just at milkweed, they calculated an establishment cost of $24/1,000 stems (the mix was $270/acre). For the pollinator mix, they calculated $46/1,000 stems established ($370/acre). The economy mix established well, but did not provide nearly as many flowering species for pollinators. TPC advises farmers to look at what species are appropriate for their site before buying seed mixes to avoid paying for species that are difficult to establish or will never thrive on some soil types. They have a tool on their website, the Iowa Prairie Seed Calculator, to help with this.

Randy and the TPC seeded another field using Randy’s drill this spring, and he is a little worried about the success of the stand. But hopefully with timely mowing the year and next, the native species can outcompete the annual weed pressure. Prairie seedings rarely, if ever, “look” successful in the first year.

The group also spent some time looking at neighboring farmer Al Schaefbach’s saturated buffer, which is one of the first installed using 50% cost share from the state. The saturated buffer is an edge-of- field practice that diverts tile water, underground, along the reach of the buffer. Instead of the tile emptying directly into the waterway, it is distributed throughout the soil in the buffer, reducing the storm surge peak and allowing the soil time to remove nitrates from the water. 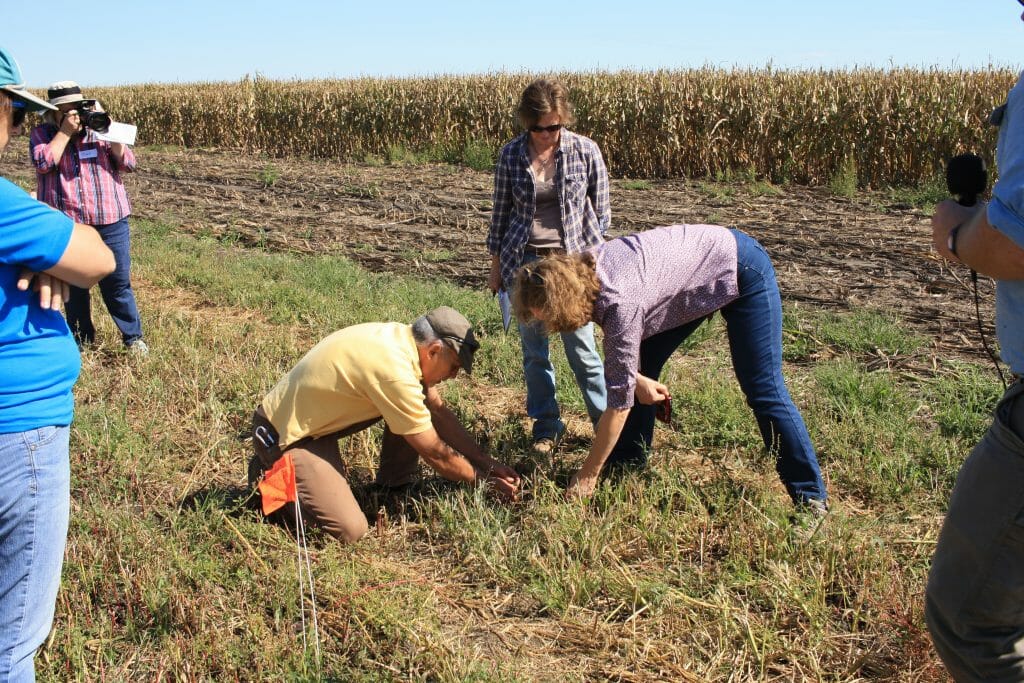 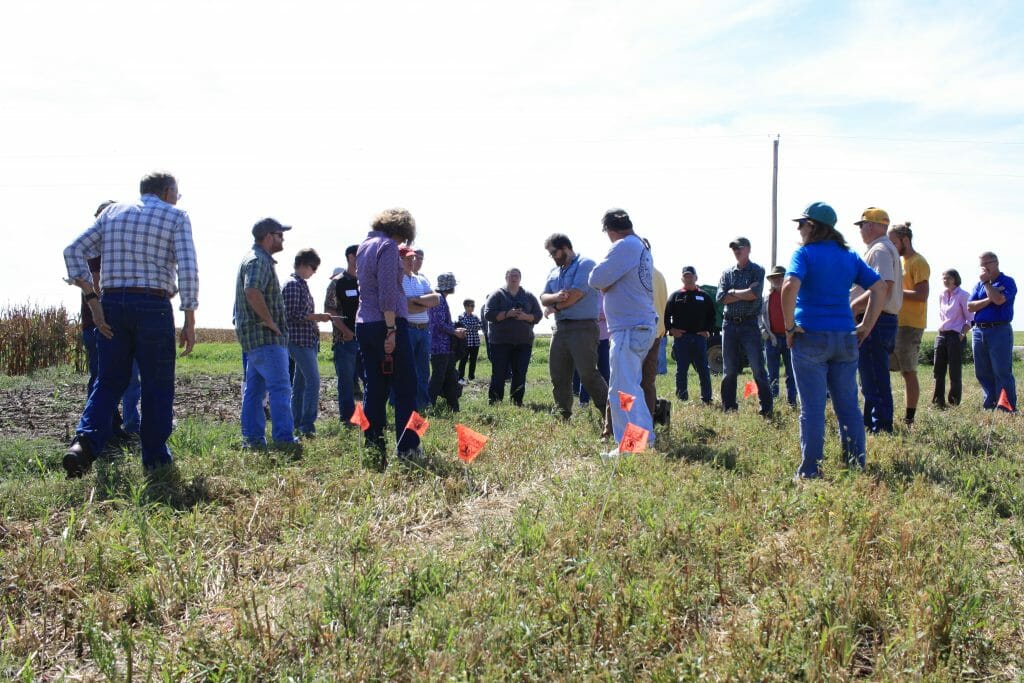 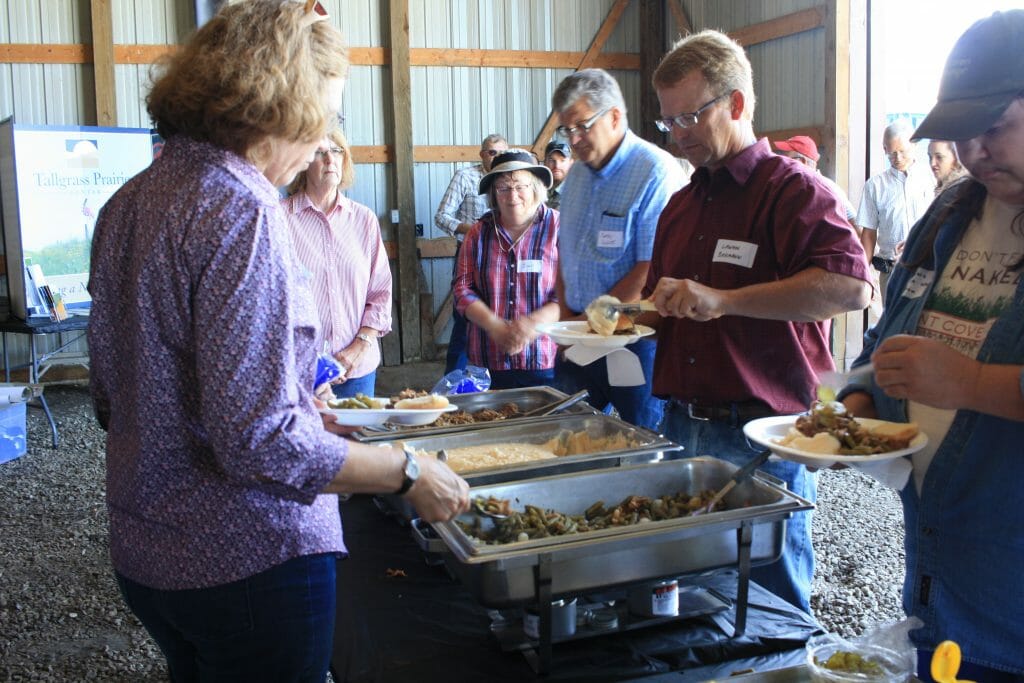 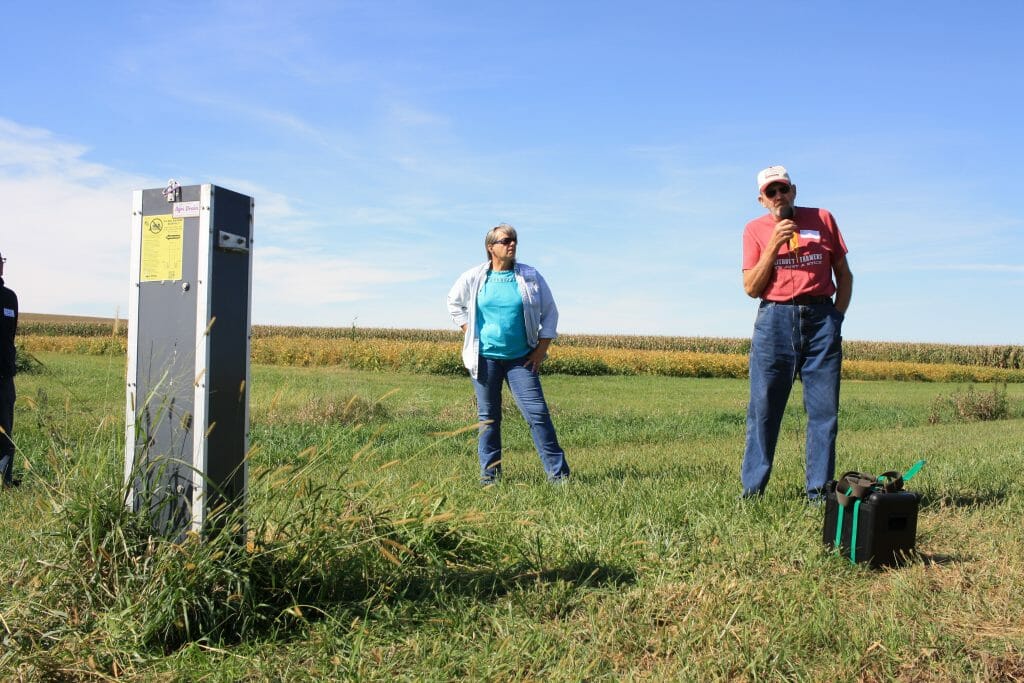