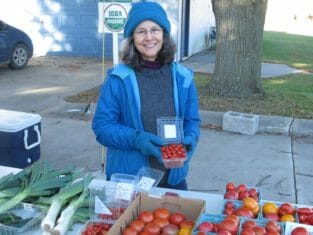 Louise has been raising vegetables – including many heirloom varieties – and herbs for market on about 1.25 acres at Prairie Roots Farm, near Otley, since 2011 with her farm partner, Abby Zalcberg. Abby’s two sons – Ansel and John-Michael – have also been integral, helping with a lot of the labor; and Louise’s husband, Jim, helps as well, including taking many photos used in marketing.

The farm is in its fifth year of organic certification, and all products are certified organic. Louise and Abby sell through a variety of markets, including a 24-member CSA; at farmers markets – primarily the Pella Farmers Market; and on-farm sales. They also sell some produce to Central College Food Service and the Pella Hy-Vee grocery store.

Louise says she’s been an avid gardener her whole life, enjoys “putting up lots and lots of food,” and had dreamed on and off about the idea of starting a commercial market garden. As a full-time professor of chemistry at Central College, in Pella, however, she felt she didn’t have the time or business know-how. The idea kept percolating, however, and when she retired from the college faculty in 2011, she felt the call to farm again – but doubts persisted.

“I thought I was too old,” she recalls. “But then Abby, who’s 20 years younger than me – and was interested in starting a farm – just talked me into it. I had just retired and was doing pottery, throwing pots. It’s similar to farming: you’re getting your hands dirty, working with the earth.”

The two set to work preparing production space on land Louise and Jim had purchased in 1995. “The land was in the Conservation Reserve Program. It’s a 20-acre property, a lot of it wooded,” Louise says. “I felt like we needed to buy that land. It had been farmed years ago before being put into CRP. “There are not a lot farms around us, so we don’t have drift problems. It is wet, though.”

To deal with that, Louise and Abby use raised beds. They also use row covers for young plants, rotate plant locations each year through the farm’s approximately 200 plant beds and intermingle different species to help reduce pests and attract beneficial pollinators. A lot of labor is done by hand, from weeding to digging the beds and harvesting produce.

Ansel and John-Michael – twins who both turned 18 recently – have contributed a lot of that labor.

And Louise says she and Abby have found they contribute complementary skills to their partnership: Abby bringing creative, out-of-the-box ideas (plus incredible determination, Louise adds: “She singlehandedly cleared, by hand, the acre we started on – trees, dead weeds and so on. I didn’t even think it could be done, but she did it!”); and Louise bringing her deep knowledge of growing plants. “I also do more of the marketing and planning side of things,” she says.

“To have a partner who’s so different from you – it’s a good balance. Abby is an incredible problem-solver and researcher. She got us a grant for a stationary high tunnel.”

Louise and Abby’s farm goals include growing healthy, organic vegetables for their community, and preserving and improving the health of the environment and their farm.

“Looking at what we’ve accomplished, I can’t believe I’ve done all this,” Louise says. “I never thought I’d have a business. It’s been a steep learning curve, but it’s been fun. I even love the planning and book work,” Louise says. “And there are a lot of people who really value what we’re doing – taking care of the earth, being environmentally responsible, conserving resources, being a service to the community – and that’s important to me.”