A return to “animal impact”: Q&A with Will Harris 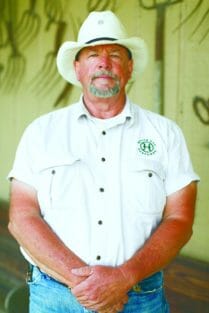 Will Harris is one of the featured speakers at Practical Farmers’ 2017 annual conference — and we’re very excited that he’s able to join us! He and his family operate White Oak Pastures, a nearly 1,300-acre farm near Bluffton, Georgia that has been in the Harris family for six generations (the sixth generation was just born on the farm to one of Will’s daughters in early December).

In 1995, Will started transforming White Oak Pastures from an industrial cattle farm to a grass-based, multi-species operation built on core philosophies of respect for both livestock and land. First, he stopped feeding his cattle grain and ceased using antibiotics and hormone implants. A few years later he eliminated chemical fertilizers and pesticides. Will then built a USDA-inspected beef abattoir on the farm, diversified his livestock, and added vegetable and egg production to the farm.

Today, White Oak Pastures is a profitable, vertically integrated operation featuring cattle, sheep, hogs, goats and five poultry species that employs over 130 people — and has helped revive the local community of Bluffton. White Oak Pastures also bears the distinction of being the only farm in the U.S. that has both red and white meat abattoirs on site. Livestock are rotated through the farm’s pastures in the Serengeti Plains Rotational Grazing Model, and all animals are hand-butchered on the farm in USDA-inspected, zero-waste facilities that run on solar energy.

“My father’s generation fell madly in love with heavy equipment and diesel fuel. We never learned how to use animal impact to shape the land. Animal impact is very important. That’s how the earth evolved – with animals grazing the land. We got away from that, put animals inside buildings and used tractors to till the land, and that had great unintended consequences to the animals and the land.”

Those familiar with Will and what he has accomplished on his family farm consider him an icon. In spite of the acclaim he has garnered — and his busy schedule — he is remarkably accessible, down-to-earth and happy to chat about his farm, its past and its present. Here’s what Will had to say to a few of my questions.

(Note: He’ll delve much more deeply into this topic during his conference sessions — so be sure to attend if you want to learn more! Visit our 2017 conference page to learn more or register).

You use the Serengeti Plains Rotational Grazing Model – which is where large ruminants are followed by small ruminants, then by poultry. How do you use this on your farm?

We customized it for our own farm. The concept came from Allan Savory, of the Savory Institute – although he didn’t necessarily call it that. Allan is the undisputed father of holistic range and pasture management. I’m 62 years old, my family has been on this farm for 152 years and he [Alan] taught me some things about raising livestock on my farm that I otherwise would not have known.

The idea is emulating the predator-prey relationship. In this country, buffalo moved about followed by deer and wolves. Africa would have had wildebeests followed by gazelles. Every part of the world has its large ruminants followed by small ones.

Timing [the rotation] is essential. You manage the timing by attempting to have as few herds as possible. So you have as big a herd as possible, and the largest number of paddocks as possible – which means they are the smallest they can be – so that you’re constantly moving the cattle and moving them off the plants before the plants start to recover.

What led you to seek all the certifications you have for animal husbandry?

The best assurance is to know your farmer and go to his farm, but that’s not always practical, so having these third-party verifiers is the next-best thing.

Is it possible – or desirable – for farmers to create a scaled-down version of what you have done at White Oak Pastures?

The model works on a wide range of scales. The only time when scale becomes critical is in situations where the farm has to make really large investments in bricks and mortar – packing plants, slaughter houses – that require a lot of volume to make it work financially.

Do you need to scale up to the size you’re at in order for this kind of vertical integration to be possible?

I had no intention of operating on this large of a scale. I started out using the few local processing facilities that were still here [in the Bluffton, Georgia area], but due to quality issues and the amount of product they could do for me, and scheduling issues, it became problematic. We couldn’t be profitable working through those issues. That caused us to feel like we had to invest in our own processing. I spent $7.5 million, and that necessitated going to a larger scale than I had intended.

The transformation of your farm was a gradual process – but you also had considerable agricultural experience. Was there a big learning curve for you to be able to successfully integrate all the livestock species – and other enterprises – you now manage?

It was a huge learning curve. During the latter half of the 20th century, our farm only produced calves for the industrial beef production system. I worked for my father – who was a great industrial commodity cattleman – and I learned a lot from him. I majored in animal science at the University of Georgia, and we ran the farm that way for 20 years.

But I became increasingly sensitive to the unintended negative consequences to the land and animals. I eventually became disgusted with it, and that caused me to look for a better way.

When I started to transition to regenerative practices and high-animal-welfare practices, I faced a very steep learning curve. My father’s generation fell madly in love with heavy equipment and diesel fuel.

We never learned how to use animal impact to shape the land. Animal impact is very important. That’s how the earth evolved – with animals grazing the land. We got away from that, put animals inside buildings and used tractors to till the land, and that had great unintended consequences to the animals and the land.

Are there any specific challenges worth noting, or any advice you’d offer to farmers thinking of scaling up?

They should go into it knowing that the changes are great – there are huge changes, and it’s very expensive, but the changes are very good. Once you’ve gotten through the pain, you’ll be very glad you’ve made those changes.

You give up the tools that reductionist science has given us, and add those costs back to production. You have to find a market for the added value you’re putting into the product. These things are very complex. I’m very glad I did it – but one should not go into it lightly.

Do you think the markets will be there if a lot of farmers decide to adopt practices similar to yours – grass-fed, and with the strong focus on land stewardship and humane treatment of livestock?

But you can’t just do one product without marketing. Finding a market was not easy. In our case, we found it necessary to build processing plants, and once they were in operation we had to find a home for a lot of product very quickly.

I hope that a lot of people don’t have to go out and build the kind of processing capacity that we did. We had to do it, but it’s an onerous process, and I hope others can find more measured ways of entering this market and system of regenerative farming.

Will will lead two sessions at PFI’s conference:

Will is also a featured speaker at the Iowa Forage and Grasslands Conference, just prior to the PFI conference. On Thursday, Jan. 19 he will lead a session called “Multi-Species Grazing: The Serengeti Model” (7 p.m. at the ISU Alumni Center).

Want to learn more about Will? Some excellent feature stories have been written: