This year marks the 30th anniversary of Practical Farmers of Iowa’s Cooperators’ Program—our vehicle for conducting on-farm research trials. As such, throughout this year we’ll periodically be taking a look back at work done by farmer-cooperators over the past 30 years in a series of blog posts entitled “Better Know an On-Farm Research Project.” In this first edition of the series, we’re profiling one of the earliest on-farm research projects in the history of the Cooperators’ Program: Nitrogen Rate Comparisons in Corn. 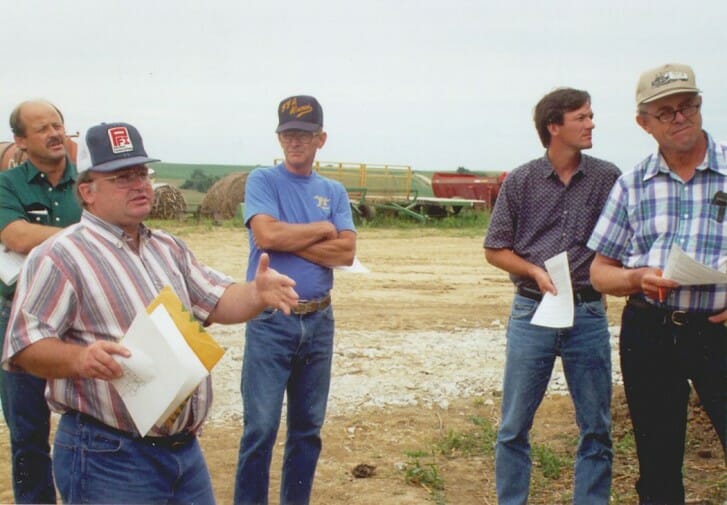 Vic Madsen (speaking) presents about on-farm research at a field day in the early 1990s.

How The Project Came To Be

This project began with four farmer-cooperators in 1987 and continued with several more farmers through 1992. Vic Madsen, who farms near Audubon with his wife, Cindy, and son, Eric, participated in the project from 1987-1991. As Vic tells it, the farmers involved in the project were looking for ways to cut costs but to also maintain productivity and ensure acceptable incomes. “We were fans of the Low-Input Sustainable Agriculture (LISA) program that was gaining attention at the time,” Vic recalls. “Nitrogen was an obvious choice for something to work on because N fertilizer was expensive then and it was fairly easy to adjust application rates with the liquid forms of the N fertilizer.”

How The Project Was Conducted

“We were in ridge-till and had all six-row equipment at the time,” Vic says. “The ridges made it easy to count the rows, apply the correct treatment to the right strips and not worry about flagging the strips. Six rows per treatment strip with six replications of both treatments called for 72 rows for the trial.” In true PFI style, the treatment strips were randomized: “We used the coin-toss method to determine the order of the treatment strips in each rep. For instance, AB, AB, BA, etc. Our kids were young and helped out with this part and found that really neat.”

Over the course of the five years Vic conducted the trials, he saw mostly statistically equivalent corn yields between the Low and High rates. Table 1 below shows his corn yields and N rates for the two treatments. On average, the Low rate (66 lb N/ac) was nearly half of the High rate (115 lb N/ac). Vic’s average corn yields for the 5-year test period were 158.9 bu/ac for the Low rate and 161.2 bu/ac for the High rate. In all years, Vic followed soybeans in rotation. 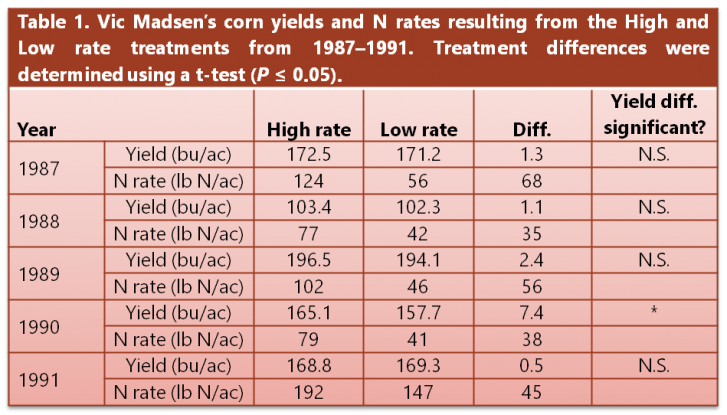 The other farmer-cooperators who participated found similar results as Vic’s. There were instances at some farms where the High rate did result in statistically greater corn yields than the Low rate. However, the increase in yield was typically not enough to pay for the higher cost associated with the High N rate. Figure 1 below shows the average corn yields and average N rates for the two treatments across the duration of the experimental period. Expected corn yields and recommended N rates may be different today, but there’s no denying that these cooperators were able to achieve the same yields with much lower N rates than their “standard” rates at the time. 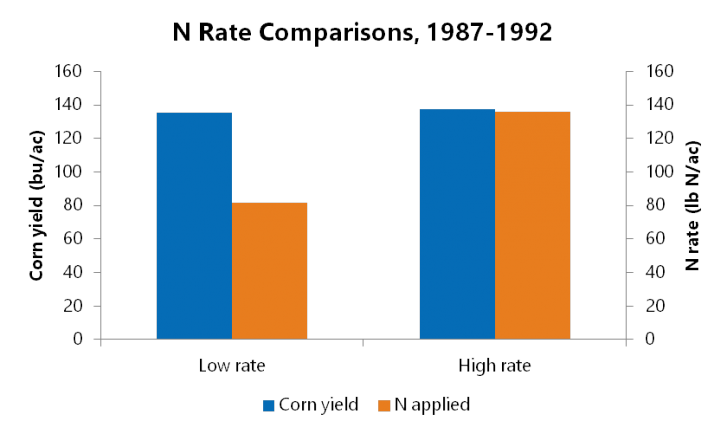 Fig. 1. Average corn yields (blue bars, axis at left) and average N rates (orange bars, axis at right) from the N Rate Comparisons trials conducted on all participating farms from 1987–1992. A total of 61 site-years contributed to these findings over the six-year period.

The Low rates were typically determined with the help of Dr. Fred Blackmer’s new-at-the-time late spring soil nitrate test (LSNT). Vic remembers Dr. Blackmer giving a presentation about the LSNT at one of the earliest Cooperators’ Meetings about needing lots of participants to help further develop the test. “He gave us some ‘junior’ chemistry kits so that we could test our soil nitrate levels ourselves,” Vic says. Now a farmer can pull soil samples, send them to a lab and get the results back rather quickly in order to guide on any additional N that may need to be side-dressed to corn. In these early years of the LSNT’s development, it was with the help of several PFI farmer-cooperators that the LSNT was corroborated and improved over time. More on the LSNT can be found in ISU Extension’s Nitrogen Fertilizer Recommendations for Corn in Iowa (PM-1714).

“The confidence factor was the biggest thing,” Vic says when reflecting on what he took away from conducting these trials. “This project gave us confidence to not put on 150-200 lb N/ac like the neighbors and most everyone else was doing. When other cooperators have similar results as you, you realize you’re not alone. We all learned we could get by with less than was ‘popular’ at the time.

“The Cooperators’ Program makes me make better decisions. Learning about stats and experimental design, I learned to pay more attention to other trial results presented to farmers. If it’s not done locally or replicated or randomized, it’s not worth much to me. I don’t put much stock in trials that are not adequately replicated or not replicated at all.

“Conducting on-farm research trials has made me more observational altogether. It’s fun to watch multiple crops grow through the season and see how they interact with each other. I just find it all fascinating.”

Reports of the N Rate Comparisons trials mentioned above can be viewed on our website at the links below: