Thank you to everyone who came to our 2017 annual conference! It’s always wonderful to see so many familiar and new faces each year.

With so many members coming from all across Iowa (and beyond!), it’s also a perfect opportunity to capture more photos of the many faces that make up Practical Farmers of Iowa.

In this week’s member spotlight, we continue our theme of featuring some of the PFI members who helped make this year’s conference another great success. 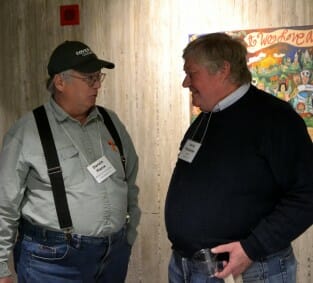 Jerry farms with his sons near Jefferson, raising row crops, cover crops and hay on about 1,900 acres. He cuts hay on part of the farm, leaving the rest for wildlife, and also maintains several areas of native prairie and forage species.

Jerry uses many conservation techniques to protect his soils and water resources on his farm, and is a vocal advocate for protecting Iowa’s soil and water quality.

In addition to serving as board president for Iowa Rivers Revival (read more about his activity with IRR here), he has participated in several Washington D.C. fly-ins organized by the National Sustainable Agriculture Coalition (of which Practical Farmers is a member) to advocate for effective federal agriculture and conservation policies.

In 2015, Jerry received the Center for Rural Affairs’ Citizen Award for his efforts to advance policies that benefit farm families and rural communities.

With his son, Tom, Jerry also owns Peckumn Real Estate, which specializes in both residential and farmland sales.

In 2012, Jerry helped lead a PFI farminar on tax preparation for farmers. Click here to listen to or download the audio of that farminar — just in time for tax season!