Thank you to everyone who came to our 2017 annual conference! It’s always wonderful to see so many familiar and new faces each year.

With so many members coming from all across Iowa (and beyond!), it’s also a perfect opportunity to capture more photos of the many faces that make up Practical Farmers of Iowa.

Over the coming weeks, as we all savor and reflect on the lessons learned, fun had, and friendships forged or rekindled during PFI’s 2017 annual conference, we’d like to spotlight some of the PFI members who helped make this year’s conference another great success. 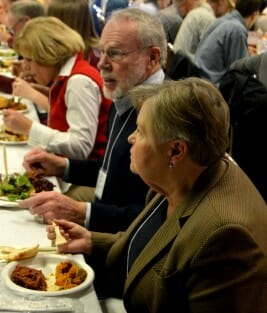 Robert and Carol are long-time friends-of-farmer members, now retired from their previous professions (Robert as a machinist and Carol as an educator and extension director), who are actively engaged with local foods as both home gardeners (and food preservers) and in local food efforts within their community.

The couple subscribes to a CSA (they used to belong to PFI member Angela Tedesco’s Turtle Farm CSA until she retired from farming in 2012). They spearhead a local cooperative buying effort to source sustainably harvested seafood (once offered through Angela’s CSA, but Robert and Carol took on the effort when she retired). About 10 years ago, they also started – and are still active with – Growing for Food and Profit, a group for those interested in growing food or supporting locally grown foods.

The intent, Robert explains, is to help people on both sides of the farming spectrum – growers and supporters (and all subcategories, from hobby farmers to backyard gardeners, aspiring farmers to interested consumers) – to connect, learn from each other and build fellowship.

“We meet in the winter about four times and have some objective,” Robert says. “We always start with a potluck dinner. People bring some really unusual dishes – good ones, I might add. Then we’ll have a directed conversation – like growing carrots. It’s easier to think about the things that didn’t work for you than the things that worked better. All these things get surfaced, and we draw from other people’s experiences.”

They also have a quarter-acre garden that is one of Robert’s passions (“it’s not very big,” he says, “but I use it pretty intensely”). He describes their interest in growing their own food as “a lifestyle.”

“It’s a lifestyle in that we love to eat – but also, as my wife and I got away from the workaday world, my objective was to keep myself healthier than I was prior to that, so that’s part of that whole concept,” Robert says.

“As I think back to our workaday world, we did use convenience an awful lot simply because we didn’t have enough time. So I’ve come around full-circle. I appreciate the time we now have to think about these things. I certainly encourage taking care of everything you produce, and it’s one of those things I think about.”

Carol – who worked for many years as a teacher, and then as a county extension director – handles most of the effort to preserve the bounty coming out of their garden, which includes a lot of dehydrating and drying.

She has also been instrumental in local foods and sustainable agriculture efforts within Iowa, serving on the Iowa Food Systems Council, helping to found Women, Land & Legacy, a USDA education and outreach program. You can read more about Carol in this Q&A with Women, Food and Agriculture Network.