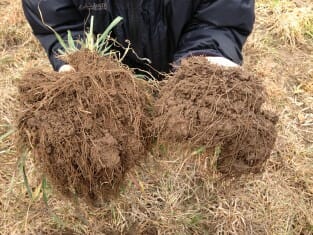 Roots of cereal rye in early April (pictured) can be a food source for harmful pathogens and insects if not managed carefully.

We don’t often think of our cover crops as gun slinging cowboys and cowgirls of the old west, staring down their pistols at villains of agriculture: diseases, insects, and weeds. But by the end of the webinar “Cover Crops and Pest Management: The Good and the Bad,” I was pretty convinced that while cover crops are no silver bullet for the big bads of agriculture, they mostly fall into the good category – even if they have a glint of the bad in their eye.

This first installment in the American Society of Agronomy’s “Cover Crop 2017 Webinars – Beyond the Basics” series explored the relationship between pests and cover crops. The two speakers showed that cover crops can be effective for combating pests (particularly weeds), but their potential to double-cross the farmer and become a host for insects and diseases should always inform management decisions.

Let’s start with the bad.

Cover crops pose a potential threat as a “green bridge” that can provide food and shelter to pests when the soil might otherwise be bare. The first speaker on the webinar, Chelsea Harbach, a PhD student at ISU studying soybean cyst nematodes, dove into the science on this topic – specifically focusing on insects and pathogens (disease causing bacteria, viruses, or fungi). 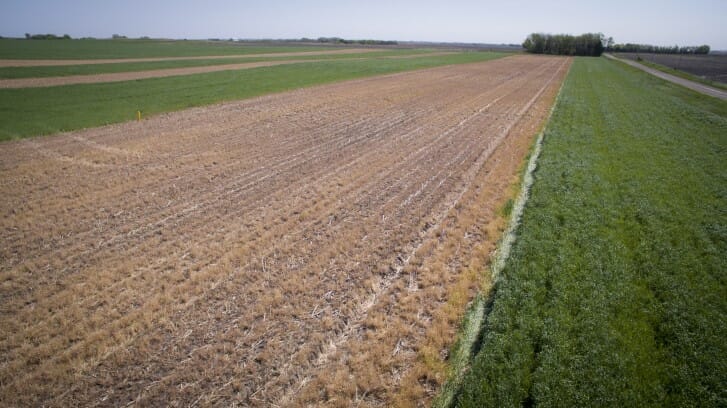 Cover crop strips for PFI’s delayed termination trial on Jeremy Gustafson’s farm demonstrate a “green bridge” of cereal rye versus an early terminated brown field in May of 2016 before soybean planting. Photo courtesy of Dean Houghton, The Furrow.

Her presentation showed that not all cover crops act as green bridges all the time – it’s much more nuanced than that. It is more accurate to say that certain types of cover crops can act as hosts for certain types of pests some of the time. For example, legume cover crops are hosts for the virus that causes soybean sudden death syndrome (Fusarium vigiluforme), but most grasses and brassicas are not. As for insects, Chelsea reviewed studies of numerous crop and pest interactions. The presence of cereal rye before corn “increased the abundance of true army worm and injured corn,” but the same cover crop before soybeans “significantly suppressed soybean aphid compared to no cover crop.” This shows that in some instances, cover crops are not only neutral or damaging when it comes to disease and insect pests, but can actually be part of the solution to addressing these issues.

So how do we make sure that our cover crops stay on the straight and narrow? The first step is regular scouting. Then do some homework; research which cover crops are hosts and non-hosts and find best practices for managing the disease or pest you found (Chelsea’s full presentation is an excellent source of such information). Finally, carefully match cover crop selection and management to de-escalate the situation. For instance, terminate cover crops early when you have detected a plant pathogen or insect problem to allow for a “brown” period between the cover crop and the main crop planting or avoid legume cover crops before soybeans if you know you’ve had an outbreak of soybean sudden death syndrome. But, Chelsea says, “Commit to scouting. Do not treat until you’ve reached the economic threshold of harm.”

But let’s not forget the good!

The second presenter focused largely on weed management – an area where cover crops are a real sharp shooter. Mark Doudlah spoke from his experience as a Wisconsin farmer who manages 1550 acres and relies on rye to replace herbicides in his operation. His advice: “Make sure you get every square inch covered uniformly.” His formula is 3 bu/acre cereal rye drilled, not aerially seeded. He then plants his beans into standing rye several days before anthesis and roller crimps the rye down into a thick mulch when anthesis hits. Practical Farmers’ own studies on delayed rye termination from 2015 and 2016 agree with Mark’s  findings that delaying termination of rye right up to soybean planting suppresses weeds.

Soybeans planted into cultipacked rye on Francis Thicke’s farm by Fairfield, Iowa progressing from left to right from June 9 to July 2 to July 12 in the 2015 season.

Additionally, Mark plants beans in 15 inch rows, narrower than most 30 inch organic soybean rows which are designed to allow between-row cultivation. Mark’s method creates a thick soybean canopy to close over the mat of cereal rye, giving near total weed control through the fall with no tillage.

There is, unfortunately, one exception. You guessed it – the biggest, baddest, ugliest of them all – giant ragweed. Mark says, “Ragweed is the one thing that we walk our bean fields for. Rolled rye works really well on small-seeded weeds, but the giant ragweed has a larger seed which is able to germinate and come up through the mulch.” Learn more about Mark’s operation by viewing his full presentation.

So, with help from Chelsea and Mark we’ve uncovered the good, the bad and the ugly of pest management with cover crops. The lesson learned is that with regular scouting and a bit of homework, cover crops can be the new sheriff in town, striking fear into the heart of weeds, insects, and pathogens alike.

To listen to the recorded webinar, visit the ASA classroom, make a new account or log in to your existing one and then “purchase” the webinars from the 2017 series. There is no cost, but you must check out in order to access streaming. Look for more blogs on PFI’s website about the 2017 ASA webinars: Cover Crops 2.0 and Scouting Cover Crops (forthcoming).