This is the second installment of our “Better Know an On-Farm Research Project” series. In celebration of Practical Farmers of Iowa’s Cooperators’ Program turning 30-years-old this year, we’re looking back at some past on-farm research trials. Last month, we featured Vic Madsen discussing strip trials he and several other Practical Farmers conducted that investigated N fertilizer rates for corn. Below, we review some trials from the early 1990s that took a look at applying biological and alternative amendments for corn and soybean production. Though he didn’t participate himself, Vic remembered these trials and suggested I reach out to one of the cooperators who did participate. So I gave Dave Lubben a call. Dave and his wife, Lisa, farm near Monticello in Jones County. In 2013, they were awarded as Master Researchers for their efforts over the years in conducting over 20 on-farm research trials and hosting more than 5 field days. 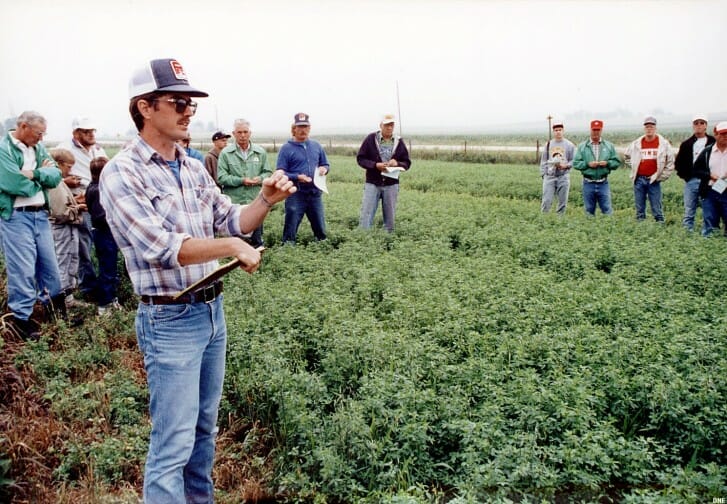 Dave Lubben speaks at a Practical Farmers field day in the mid-1990s.

How The Projects Came To Be

“At the time, these biological products were being promoted by a few companies,” Dave says when thinking about why he started conducting these trials starting in 1991. “They’d advertize a 10% increase in yield so we wanted to see if there was any response on our own farm.” Some of the things Dave trialed were Biomix + Pepzyme, zinc ammonium acetate (an agricultural crop additive said to improve N crop uptake), foliar feeding micronutrients and a microbial soybean inoculant that was said to improve biological N fixation from the atmosphere.

“I had read an article by [PFI co-founder] Dick Thompson who was doing his own on-farm research with strip trials,” Dave remembers. “This inspired me to do my own research. I conducted a few trials on my own [in 1991] and sent in the results to PFI.” Dave quips: “I think Tom Frantzen fell out of his chair realizing that there were people like me out there reading PFI’s work and then doing research themselves!”

How The Projects Were Conducted

Dave used randomized and replicated strip trials—the hallmark of PFI on-farm research. “We’d put out six replications of each treatment,” Dave says. Typically, the trial would consist of two treatments (with-product vs. without-product) which would make for 12 experimental strips altogether for a trial. Dave says that dedicating 12 strips of a field to on-farm research is an easy and low-cost way to get reliable and worthwhile data. “Strip trials allowed us to test things we otherwise wouldn’t have tried,” he says. “We wanted to see if we could prove things with these trials and then see if we could scale it up to a whole field.”

“Ninety percent of the time, we never saw a response [to the products applied],” Dave says about the trial results. “They were fun to do and I liked putting the products to the test. We always hope when we try something that it will work. But that wasn’t the case. That’s why we do it in test plots.” Corn and soybean yield results from Dave’s trials are provided in the table below.

When there was a statistical yield difference due to the treatments, the change in yield was not enough to pay for the added cost of applying the product. “The soil consists of a huge ecosystem,” Dave says. “Adding a little bit of something, like we tried with these trials, is probably not going to create a response.”

About the trial from 2001 involving the microbial soybean inoculant, Dave had this to share: “I had read an article from Ohio showing soybean yield responses. The guy I called to get the product from told me that it never showed any response west of the Mississippi River. Well, we tried it anyway and… no response. Just shows that location matters.”

“We all do things a little differently,” Dave says, referring to the value of a farmer conducting on-farm research on his or her own farm to answer questions he or she has. As Vic Madsen attested, conducting trials gives you confidence to try things. Dave concurs: “Doing these trials showed me that I could do on-farm research at my farm with my soils and my management.”

“On-farm research allows you to test things on your farm for little cost,” Dave reiterates. “I still enjoy the principles Dick Thompson preached and that I use to this day. Look at things from an agronomic and economic standpoint.”