How Does Seeding Date and Method Affect Cover Crop Performance?

In 2014, Iowa Learning Farms and Practical Farmers began a joint research effort to investigate the use of a highboy seeder to seed cover crops into standing corn and soybeans. The objective was to determine the effects of planting technique on the successful establishment of sole species and mixed species cover crops. Cover crop planting technique considered two factors: 1) seeding date (into standing crops vs. post-harvest) and 2) method (Hagie Highboy vs. grain drill).

The results are highlighted in a new report: Seeding Technique and Date Effect on Cover Crop Establishment. More details on the project are provided below. 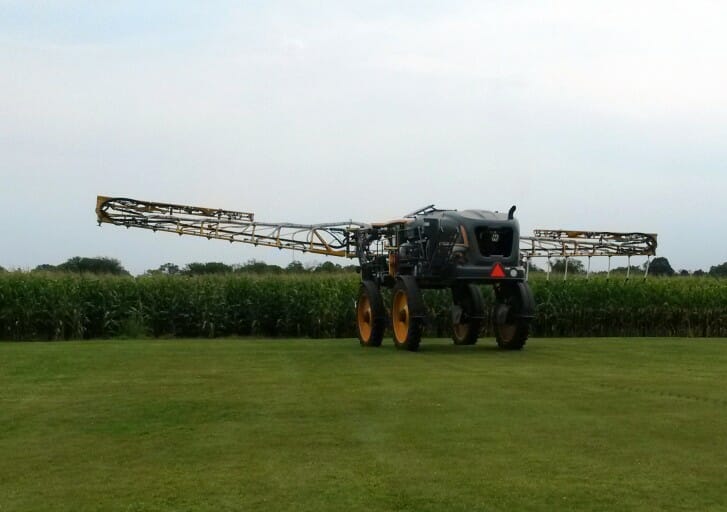 How Was The Research Conducted?

Table 1. Seeding dates and sampling dates for cover crops at each location.

What Were The Findings? 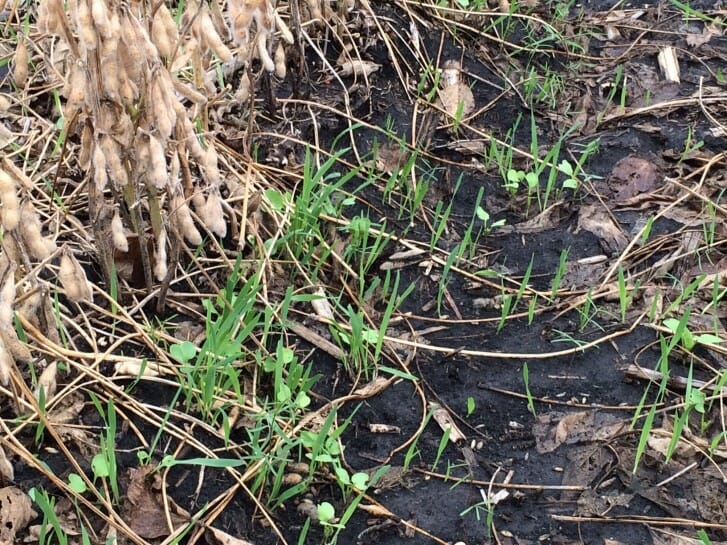 Cover crops were seeded into or after soybeans (highboy or drill, respectively) and aboveground cover crop biomass was measured just prior to a hard freeze in November 2014. At each location, the highboy treatments resulted in more cover crop biomass than the drill treatment (Figure 1). At Clarion, there was too little cover crop growth from the drill treatment to document. There was no difference between the two highboy treatments across locations. At Kanawha and Clarion, the cover crop mix generated more biomass than the sole oats in the highboy and drill treatments. The opposite was true at Eagle Grove. Regardless of seeding technique, the oats overwhelmingly made up the largest proportion of the cover crop mix biomass at each location. 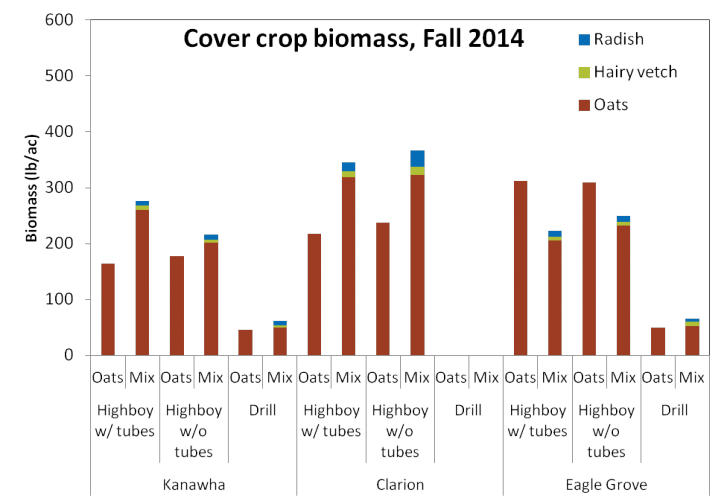 Figure 1. Aboveground cover crop biomass at each location in Fall 2014. Cover crops were either seeded into standing soybeans with highboy seeder or after soybean harvest with a grain drill.

Cover crops were seeded into or after corn and aboveground biomass was measured just prior to a hard freeze in fall 2015 as well as prior to chemical termination in spring 2016. The highboy treatments resulted in more cover crop biomass than the drill in the fall at all locations (Figure 2) and in the spring 2016 at Kanawha and Eagle Grove (Figure 3). At Kanawha, the sole cereal rye produced more biomass than the mix in the highboy treatments in both the fall and spring. In general the cereal rye tended to make up the largest portion of the mixes across locations in fall 2015 (Figure 2). Cereal rye made up the entirety of the aboveground biomass recorded in spring 2016 (Figure 3). Cover crops were terminated in late fall at Clarion, thus no spring measurements were made. 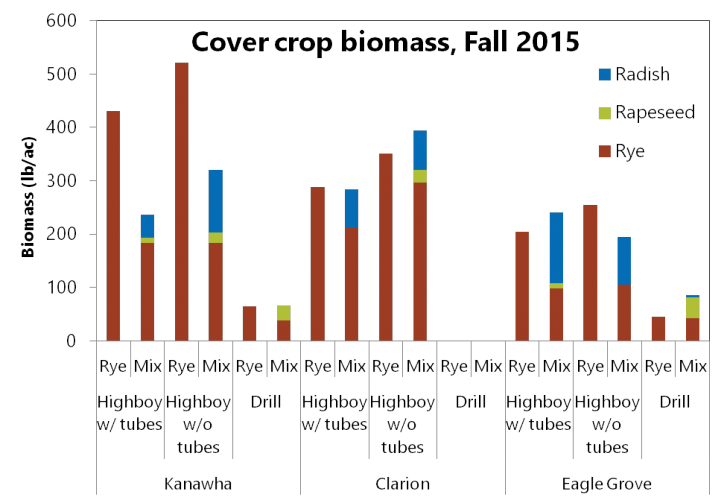 Figure 2. Aboveground cover crop biomass at each location in Fall 2015. Cover crops were either seeded into standing corn with highboy seeder or seeded after harvest with a grain drill. 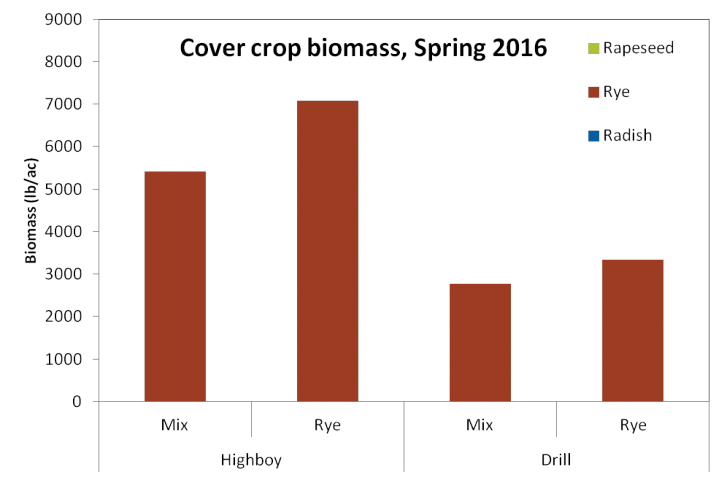 Figure 3. Aboveground cover crop biomass at Kanawha and Eagle Grove in Spring 2016. Values are averaged across locations and the two highboy treatments (w/ and w/o drop tubes).

The earlier, highboy seeding technique into the standing crop resulted in more cover crop growth than the drill which occurred after soybean and corn harvest. The small grain portion of the cover crop mixes made up the majority of the growth recorded–oats when seeded into soybeans and rye when seeded into corn. There were no differences in cover crop biomass observed between the highboy treatments with and without the drop tubes. The drop tubes allowed the highboy to place the cover crop seed on the soil surface just below the crop (soybean or corn) canopy but this did not result in any advantage. 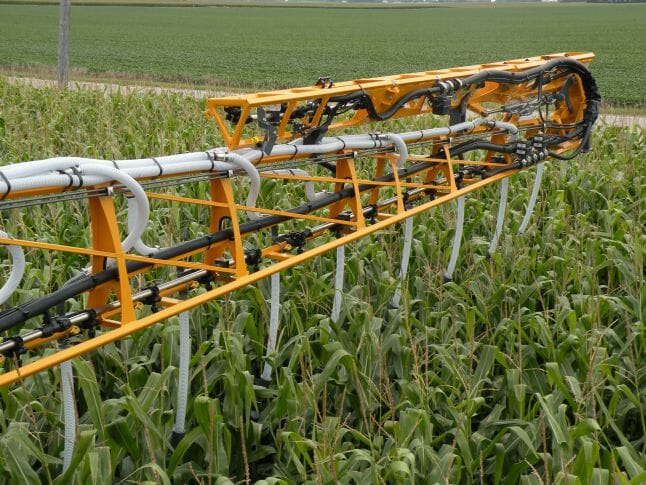 This material is based upon work supported by the Natural Resources Conservation Service, U.S. Department of Agriculture, under NRCS Conservation Innovation Grant Agreement 69-6114-13-005.