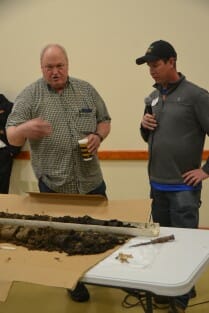 Jack Boyer (left) and Neil Sass of the NRCS discuss some deep soil cores pulled from some of Jack’s cover crop fields.

On March 29, Jack Boyer hosted a field day to share his experiences and successes with using cover crops on his family’s farm near Reinbeck. Jack and his wife, Marion, are lifetime members of Practical Farmers. They raise corn, seed corn, soybeans and cereal rye for cover crop seed. They have been integrating cover crops into the fields for the last 6 years and are beginning to see the benefits, but still looking to find the quantifiable financial benefit in addition to the environmental benefit. Their over-arching goal: To leave the farm in as good or better condition than when we obtained it.

We had planned to head out to the field to see cover crops and cover crop roots in a soil pit but the rain that fell all morning didn’t allow us to do so. Luckily for us, Jack and folks from the NRCS did their best to “bring the field inside.”

Jack kicked things off by explaining to the group how cover crops contribute to soil health on this farm–retaining nutrients and keeping the soil in place. He has found success with using cover crops by trialing several techniques through on-farm research as part of PFI’s Cooperators’ Program. More details on Jack’s past work can be found in these reports:

Growing Your Own Cover Crop Seed

More recently, Jack has been exploring growing his own cereal rye cover crop seed.  Last year, Jack grew cereal rye to harvest seed for the first time. He explained that it is important to know your seed source and seed size when raising a small grain, like cereal rye. Seed size is especially important because the size of the seed can ultimately affect your seeding rate. By counting and weighing seeds, Jack was able to determine that seeding 56 lb of ‘VNS’ rye per acre would result in a population of 880,000 plants per acre. If he seeded the improved ‘Elbon’ variety at 56 lb per acre, this would result in 1.4 million plants per acre. “I could effectively seed the ‘Elbon’ variety at 36 lb/ac and achieve the same population as the ‘VNS’ rye,” Jack said. Knowing your seed size can affect your seeding rate and ultimately your expenses! Speaking of expenses, Jack compared how much it cost him to raise cereal rye last year to how much it cost him to raise soybeans. Due to the lower costs associated with growing rye, and the dual returns from the seed and straw harvested, Jack calculated that it was more financially advantageous for him to raise rye rather than soybeans (by approx. $200/ac!). 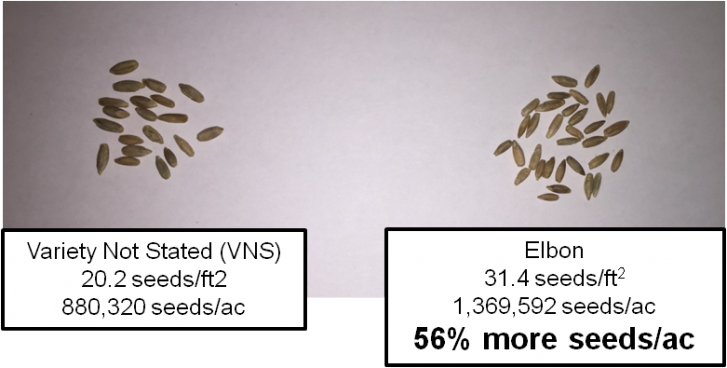 56 lb/ac of VNS does not equal 56 lb/ac of Elbon cereal rye. Courtesy of Jack Boyer.

Another technique Jack tried last year was interseeding his seed corn with a cover crop mix at the V4 stage in early or mid-June. This technique appeals to farmers who want to increase the diversity of cover crop species they seed on their farms. In the past, Jack had tried interseeding into field corn but the corn grew so tall that it shaded out the cover and it eventually withered and died. Seed corn, however, permits much more sunlight to penetrate the canopy and reach the soil surface. So, Jack had a hunch that this might provide interseeded covers with a better opportunity. On June 8 last year, Jack seeded replicated strips of two mixes into his seed corn.

Later in the summer, the strips looked like this: 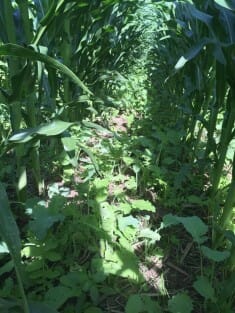 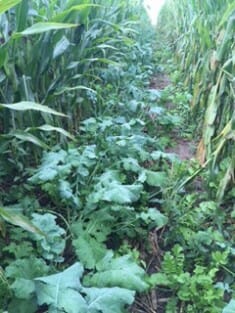 By mid-October, the mixes had put on between 2,700-2,800 lb of aboveground biomass per acre. Moreover, the seed corn company Jack work’s with reported that the covers had no adverse effect on the seed corn yield. Yields were equivalent to strips where Jack did not interseed any cover crops. Look for a research report to be posted to our website soon that will provide more details on this project!

Bringing the Field Inside

We had originally intended to caravan after lunch from the Reinbeck Memorial Building to one of Jack’s fields to view soil pits he had dug underneath some of his cover crops. The persistent rain prevented this, but Jack worked with Neil Sass and Tina Cibula of the NRCS to bring some deep soil cores and conduct some soil demonstrations indoors. 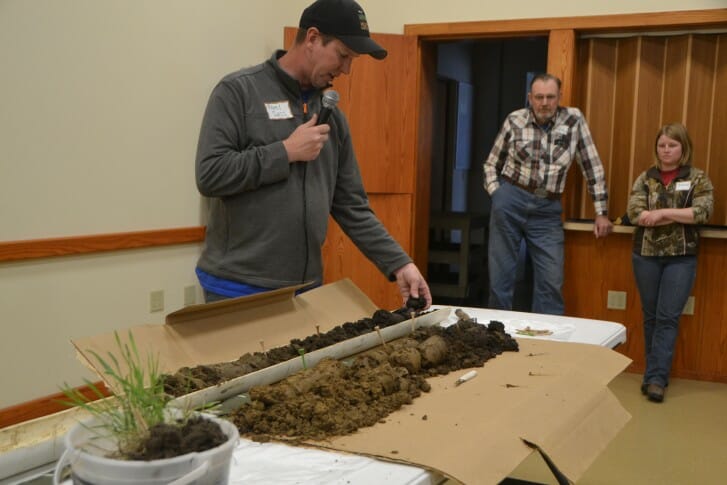 Neil Sass, NRCS, describes some of the soil they brought in from Jack’s field. The golf tees in the soil cores indicate where Neil observed earthworm channels. 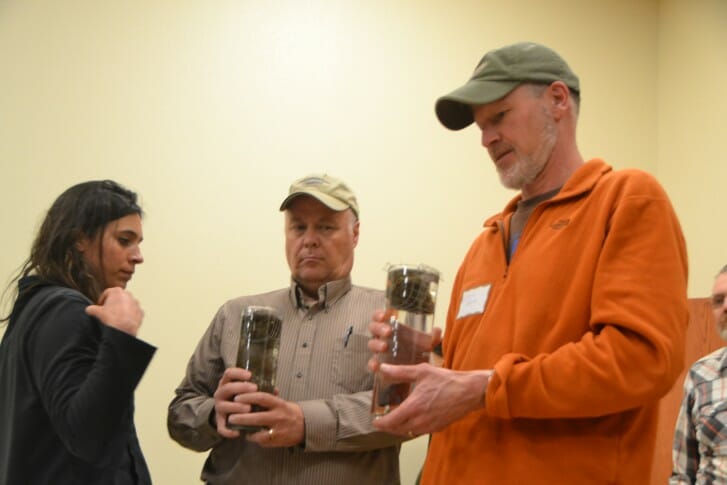 PFI member Clark Porter (far right) and another attendee assist Tina Cibula, NRCS, conduct a “slake” test. The no-till soil Clark is holding keeps its form while the tilled soil in the other beaker breaks up rapidly when plunged into the water.

The rain did let up just enough for us to go out to the parking lot for Tina and Neil to conduct a demonstration using a rainfall simulator. Yes, we simulated rainfall between actual rain storms! The rainfall simulator shows how reducing tillage and keeping roots in the ground the year-round can reduce runoff and improve water infiltration.

Want to Re-live this Field Day?

PFI member Bob Recker streamed this entire field day live on Facebook. He also recorded it and has made it available on his website. Find Jack’s presentation slides and Bob’s recordings here: http://cedarvalleyinnovation.com/practical-farmers-of-iowa.html

And thanks to Jack and Marion Boyer for putting this field day together.