On Thursday April 6, fifty-one attendees gathered in the Leighton Town Hall for a cover crop field day hosted by Ward Van Dyke. After tucking into a delicious lunch organized by Sandi Van Dyke, we dove into the management and benefits of cover crops. We stayed indoors and had several presentations inside to kick off the program before moving our “cover crop caravan” to two field sites on two different farms to see cover crops on the ground. 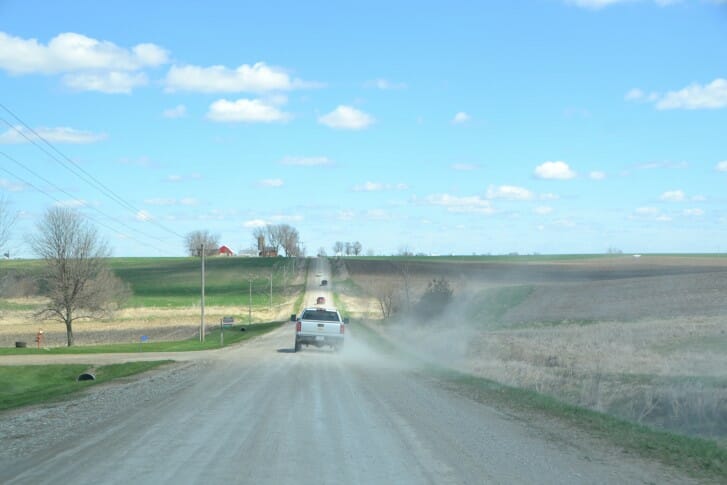 First Ward spoke about his experience with cover crops. He started slow with oats, but now he does everything with cereal rye. Though he thinks the cover crops are great for stewardship, he’s now looking to “make cover crops pay” through weed control. And so far it’s working, he said, “we just don’t get the problems with marestail when there’s rye.” Last year, he added a pre-emergent herbicide to the glyphosate burndown, but was able to cut out all herbicide applications after that. This year he hopes to leave off the pre-emergent herbicide application altogether.

Last fall Ward planted his cover crop by broadcasting the cereal rye seed with fertilizer and then shallow incorporated the seed with a vertical tillage pass. He showed aerial drone videos and photographs of the fields and we could see that the resulting stand was very patchy. Rather than being a smooth blanket of green, the fields were streaked with lighter and darker greens and bare patches. The resulting stand was due to the cereal rye seed not spreading as far as the fertilizer did. To avoid overlapping the fertilizer applicator the resulting seed distribution was uneven and probably not good enough for similar weed control as compared to Ward’s spring of 2016. 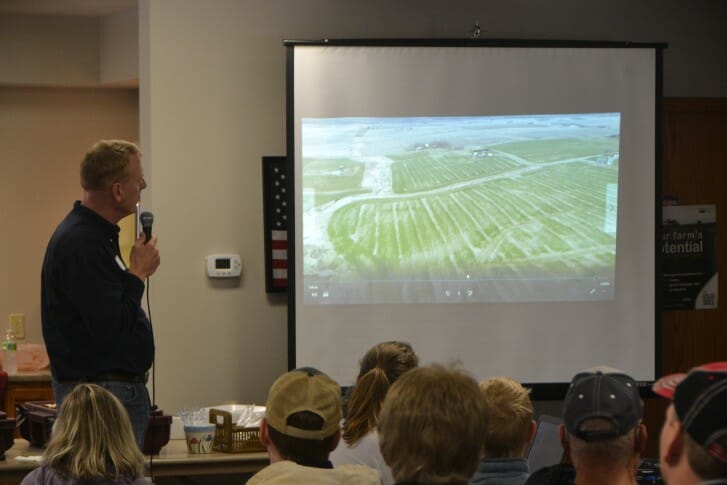 Ward Van Dyke shows aerial drone footage of the streaky rye stand he planted with a fertilizer spreader as an experiment last year.

Then, we had a brief presentation from Meleia Shellman, the Muchakinock Watershed Coordinator from the Mahaska County Soil and Water Conservation District. She talked about the initiatives her office is taking to improve water quality in the Muchakinock Watershed. They help connect farmers with funding to plant cover crops in areas that are contributing to sediment and nutrient pollution of the Muchakinock. They also take data on their efforts, sampling water from tile lines in fields with cover crops and without to test the change in nitrate levels in the water. Her data showed that fields with cover crops reduced nitrate runoff in tiles by several times the rate of fields with no cover crops.

The final indoor speaker was PFI lifetime member Steve Berger. Scheduled to speak at Ward’s request, Steve discussed his extensive use of no-till and cover crops to armor and build the soil. Steve said, “I’ve been no-tilling for forty years and with cover crops for more than 15 and I get out in the field first because the soil can hold up the equipment. No-tillers are the first ones in the field in my neighborhood!”

Steve’s talk was structured around the four elements of successful cover crop management: nitrogen, planter setup, insect scouting and time (aka patience). To the first point, Steve says, “We spoon feed our nitrogen,” meaning that they make many small applications of nitrogen at different points in the year just when the crop is hungry for it. You can read more about his exact nutrient plan in this 2015 article from Progressive Farmer.

As for planter set up, it does take a certain level of equipment requirements to plant no-till, as Steve does. He showed a picture of his planter (below), set up with all the bells and whistles. He emphasized that adding clean sweep row cleaners is important to reach the surface through the cover crop mat without disturbing the soil, but as for the rest, Steve says, “You don’t have to have all the planter bells and whistles. Just add one piece at a time.” 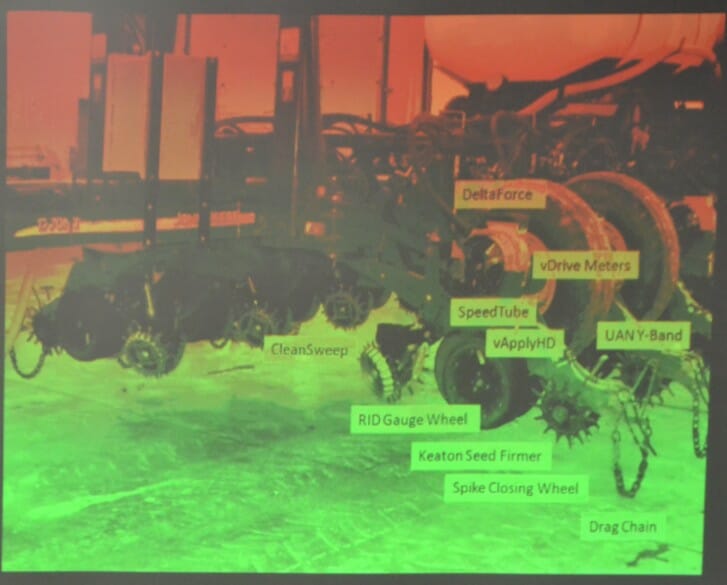 His advice about insects? “Be ready for army worms.” These pests will be drawn to the green cover crop fields while others are brown in the fall – so regular scouting and management is necessary to keep this pest in check.

To the final point – time – Steve bases his spring termination on nighttime temperatures, waiting until they reach the upper 40s before spraying his cover crops with a glyphosate burndown. But, he says, know when to wait too. If you’ve recently tilled or applied fertilizer like anhydrous ammonia, the rye will be recovering from the disturbance, which may limit its intake and thus the effectiveness of your burn down herbicide application. Give it 3 or 4 days after these field operations to make sure the burndown works the first time.

The benefits of mastering these four steps are more resilient, healthy soils. “Each year we have more and more six inch rain events,” Steve said. “Think of soil health as going to the gym. You’re either in shape or you’re not. Your fields can take a 3 inch rain or it can’t.”

After Steve’s presentation concluded, we headed out to see cover crops in action. The first stop on the caravan was Ward’s field where we got to see first-hand the patchy stand that resulted from his experimental planting method last fall. He also discussed his spring management plan going to corn versus going to soybeans. Many of Steve’s same recommendations were shared by Ward. 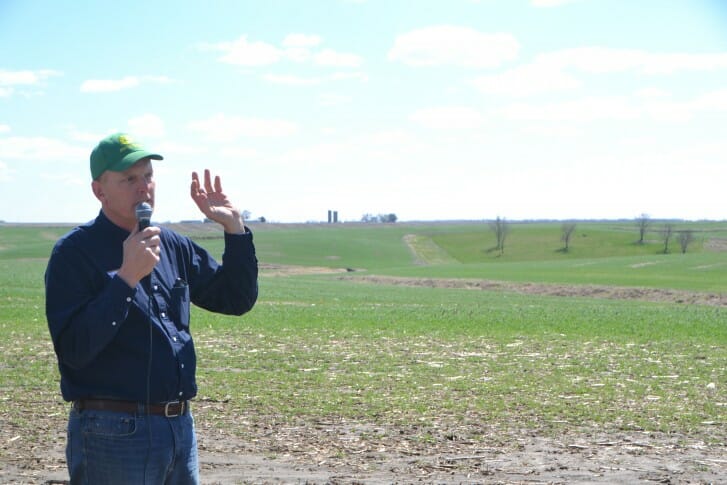 Then our caravan proceeded to the field of Arvin Vander Wilt, a farmer who has planted cover crops through the Muchakinock Watershed project. Jason Steele of the Jefferson Co. Natural Resource Conservation Service, had taken sod from Arvin’s field and Jason’s own cover crop and tilled field with no-cover crops from Jefferson County and set them up under the rainfall simulator. After running about an inch of rain through the sod we were able to observe firsthand how the water infiltration in the cover cropped earth was significantly greater and contained less sediment. The last tabletop demo Jason showed the group was the Slake Test. Again he compared the resistance to erosion between Arvin’s no till, cover cropped soil and Jason’s home farm’s tilled no cover cropped soil. The soil clods from the no-till, cover cropped soil showed their fitness and were able to take in water and not fall apart as compared to the tilled, no cover cropped soil. 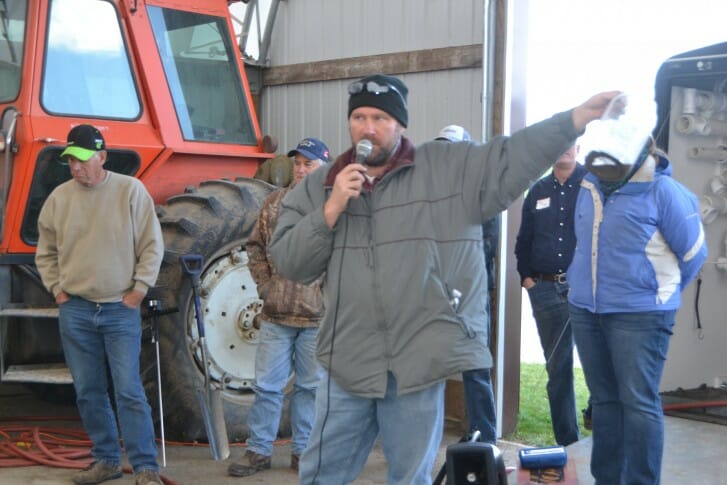 Jason Steele of the Jefferson Co. NRCS holds up the infiltration bucket from the tilled, no-cover crop soil showing the small amount of water and the large amount of sediment — coloring the water dark brown and leaving a ring of soil at the base of the bucket even when tipped.

We ended the field day digging in the dirt in Arvin’s field and chatting informally about farmers’ plans for spring management. Visit our Cover Crops Page to find more resources on cover crop management, research and benefits. 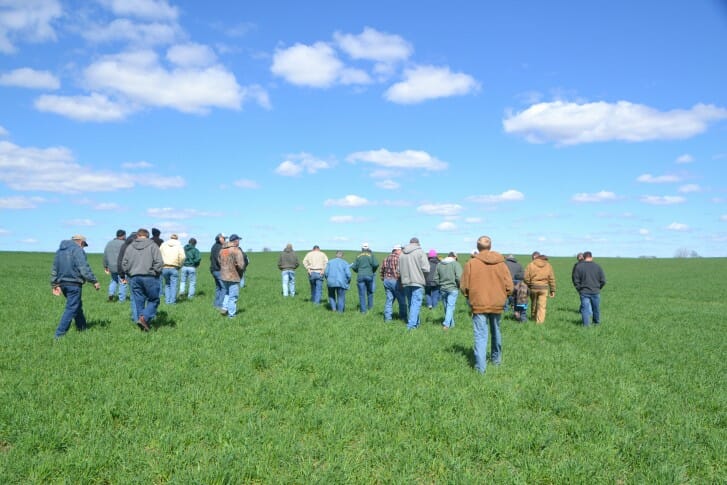