Russ and Phyllis Brandes hosted 30 at their farm Tuesday, April 4 for a spring cover crop field day. After a week of wet weather, a sunless but dry day served attendees just fine.

Russ operates Brandes Farms Inc., a 400-acre corn and soybean operation that incorporates cover crops and some alfalfa. He also has a small cow-calf herd and hogs. Russ is the 4th generation to farm the land near Hancock. His great-grandfather started farming the area in 1874. Russ grew up where he now lives.

Of the experiences he shared, Russ said, “This is what I do on my farm. It’s not the right way, just my way. Other farms have different soils and different circumstances.” This is a great reminder that could start off each field day Practical Farmers holds—farmers serve as great examples to learn from, not models to aspire to. 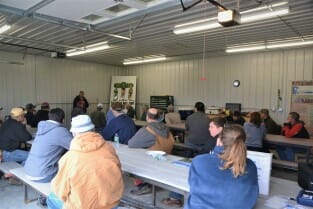 Russ has served as a commissioner or assistant commissioner for East Pottawattamie County Soil Water Conservation District since 1983. He has also been no-till farming since the mid-80s. Russ injects hog manure from his operation into his soils every other year. Russ was disappointed that his organic matter wasn’t increasing, despite regular manure injections. So, he started experimenting with cover crops.

Russ first tried cover crops in 2013. His first go at it was ryegrass flown onto soybean at yellow leaf stage. In 2014 Russ had cereal rye flown onto corn at black layer. 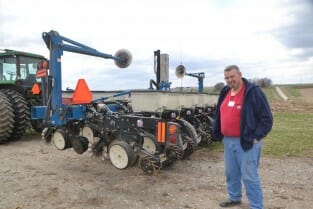 In 2015 Russ started using a Kinze 3500 planter to seed his cover crops himself. This planter can plant eight rows at 30” row widths, or 15 rows at 15” row widths. It is a plate planter, using a backing plate to keep seed in place and get an even planting.

In 2016, Russ let some of his rye grow to maturity, combined it and sold some seed for cover crop. Where the rye had been, he planted a warm season mix consisting of:

Russ seeded this mix at 33#/acre. “This is an investment,” he said, “not a cost.” The seed price was $27/acre, and drilling price $15/acre. Russ’ total investment was $42/acre. Russ has a goal to seed a diverse warm season mix across the remainder of his acres in increments over the next seven or eight years.

“Cover crops aren’t cheap,” he said. “But there is a cost to soil loss. There’s more organic matter built by cover crops with living roots than from overwintered dead plant matter. There is also a lot of livestock under the soil surface building my soil. Something I heard stuck with me: ‘Tilling the soil is the equivalent of an earthquake, hurricane, tornado, and forest fire occurring simultaneously to the world of soil organisms.’”

Russ is contemplating how to terminate his cover crops before corn with this wet spring. 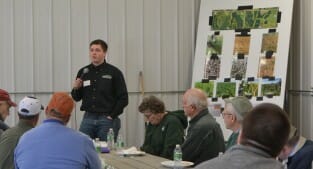 After Russ provided this information, Colten Catterton from Green Cover Seed shared knowledge with the group. Colten explained, “As long as the ground isn’t frozen you can seed rye. Winter growth will be limited, but it will come up in the spring.” Colten shared attributes of Elbon cereal rye versus VNS cereal rye. Elbon has a shorter dormancy, providing both longer fall growth and earlier spring growth.

Colten also said, that the general rule of thumb for organic matter rate increase is 10 years for a 1% increase. He said grazing speeds up this organic matter increase: “If cattle eat 40 to 50 percent of the cover, plant growth is stimulated and the plant can double its roots.” He warned that too much grazing, where an animal eats a majority of the plant, will stress the plant too much and reduce re-growth of plant above soil as well as root growth. For a copy of Green Cover Seed’s 2017 Soil Health Education and Reference Guide, contact Green Cover Seed.

He also talked about herbicide decisions to consider with cover crops:

Doug’s handout, including tips, herbicide classifications and common corn and soybean herbicides can be found here.

Terry Gleaves from East Pottawattamie COunty NRCS talked about incentives for planting cover crops. He said there is a cover crop cost share of $25/acre for the first year, and $15/acre fr following years. Environmental Quality Incentives Program (EQIP) also has incentives for cover crops, up to $41/acre. Terry pointed out beginning farmers can get higher rates.

Terry also said the Mississippi River Basin Initiative has cost-share that provides up to $62/acre for cereal rye, and up to $73/acre for multi-species mixes. To learn more about these, contact your local NRCS office.

After an informative listening session, the group went outdoors to see Russ’ cover crop stand. With the entire farm planted into cereal rye, his fields were vibrant green. Participants checked out Russ’ Kinze planter, talked about seeding and termination dates and methods, fertility for corn following a cover crop, and many more cover crop-based conversations.

Steve McGrew, farmer from Emerson, rounded out the field day by demonstrating his drone for the crowd. This tool can scout an entire field, taking pictures and video at the height and rate set by the operator. This aerial view provides a useful look to help assess areas with poor drainage, yield discrepancies, stand establishments, pest pressure, and more.