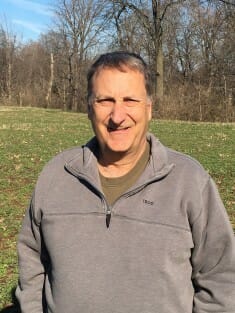 He uses cover crops on some of his farm’s row-crop acres – and is interested in transitioning more acres to cover crops as a means of providing “holistic fertility” on the farm and reducing synthetic fertilizer use.

Greg is also a regular reader of Practical Farmers’ on-farm research. When a new research report is published on PFI’s website, Greg is often one of the first to comment and get a conversation going with other farmers on one of our email discussion lists.

“I credit a lot of my own recent success to those conversations,” Greg says. “I would not have had the confidence in my 2016 rye enterprise had I not boned up on reports and contacted individual members on the discussion list to give me direction. We are expanding our cover crops and nitrogen ‘tweaking’ having been guided by some of the research done.”

In addition to farming, Greg offers a range of services for farmers and landowners through Rebman Farms, including creation of field and farm records; help analyzing and complying with government programs; development of crop and marketing plans; consulting services; and more.

The farm has been in the Rebman family for more than 100 years, and has been designated a Centennial Farm by the state of Illinois.

Learn more about Rebman Farms, its history and services, at www.rebmanfarms.com.