We continue our celebration of Practical Farmers of Iowa’s Cooperators’ Program’s 30th anniversary with another installment of our “Better Know an On-Farm Research Project” series. Previously, we featured Vic Madsen discussing strip trials that investigated N fertilizer rates for corn and Dave Lubben discussing some of the biological and alternative amendments he tried for corn and soybeans. Now we train our focus on some of the earliest vegetable research trials which began in the late 1990s. For several years, lifetime PFI member Angela Tedesco ran Turtle Farm near Granger, which offered CSA shares to customers, and was among the first to conduct on-farm research as part of the emerging horticulture crowd among PFI’s ranks at the time. As Angela tells it, she was looking for ways to expand her CSA but conserve space with transplants in the greenhouse. 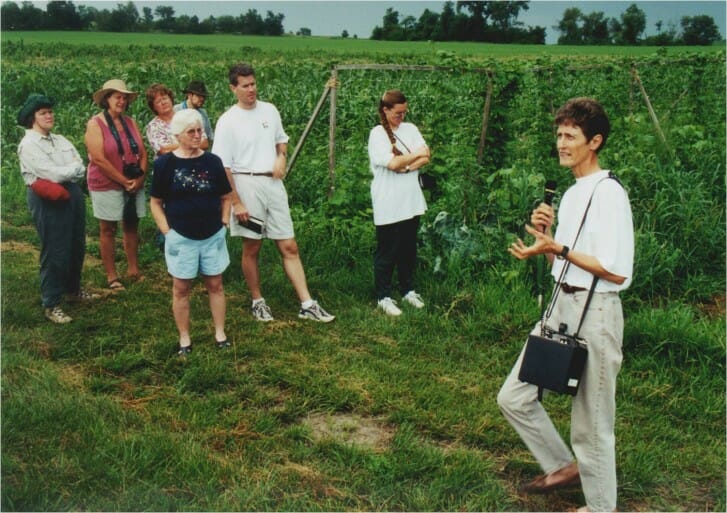 How The Project Came To Be

“I was just getting started and was trying to figure out how to maximize space in my greenhouse,” Angela says when reflecting on the impetus for the trial she first conducted in 1998. “When you plant thousands of onions but want to expand your operation, space-saving shows up on your radar.” Previously, Angela would transplant individual onion plants into beds with 3-4-inch spacings. But then she read about Maine farmer Eliot Coleman planting soil blocks of multiple onion plants in 12-inch spacings. “That ‘bunching’ of plants with wider spacing would make it much easier to hoe and weed the onions,” Angela says. “And the idea of not planting onion plants one-by-one was very appealing!” Coleman was using soil blocks measuring 2” x 2” x 2” that he’d seed several onions into, but that exact technique wouldn’t really save Angela any space. “Could I seed 300-400 onions into 98-cell flats (3-4 seeds per cell)?” Angela asked. And perhaps the wider spacing between plants in the bed might make it easier to lay mulch or weed. A trial was born.

How The Project Was Conducted

Angela decided to test the effects of 1) planting “singles” vs. “multiples” and 2) mulch vs. no-mulch on her onion production. She used a “full factorial” design in that each planting pattern x mulch combination was replicated the same number of times in the field. “I wanted to see if planting multiples and mulching would save on labor compared to the way I was doing things at the time (singles with 3-4-inch spacings),” Angela says. She conducted the trial in 1998 and 1999. “Weather can vary, so that’s why you do research for multiple years,” Angela says. “And more is better, but you can’t find many who will take the time to do things for more than two years!”

As seen in the table below, in the first year (1998) using the “multiple” planting pattern was far superior to planting singles in terms of yield, plant survival and labor. The next year, however, there wasn’t much of a difference except for the multiple planting pattern saving labor. The 1999 trial also took place at a new location as Angela purchased land: “It probably had better soil and 1999 was much wetter than 1998, so the mulch didn’t pay off in terms of yield in the second year of the trial.” Angela says about the two-year trial results: “I learned that I could do multiple onions in the cell packs and they’d size up nicely in the field and save me labor on planting.” The labor saving capacity of the “multiple” planting pattern treatment came from the time saved during transplanting in both years. “Sometimes saving labor is better than improving production,” Angela says. 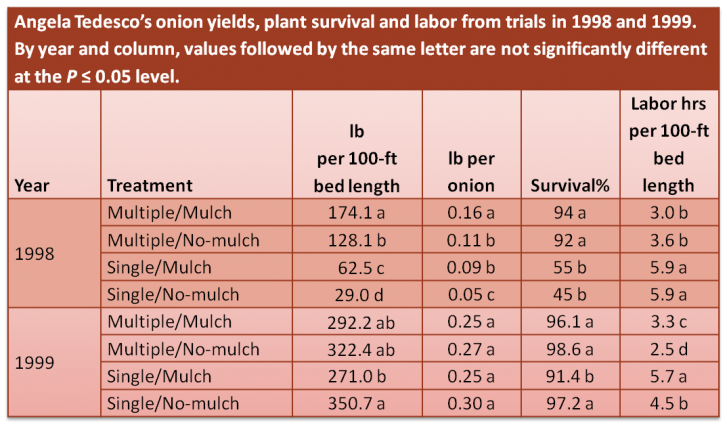 In the years since conducting this research Angela ceased mulching the onions she grows. “I had one year where mulch really reduced the survival of the plants because it was just too wet,” she remembers. Angela says her onions would be among the first crop she planted in the spring with no slow down until about June 1. “I found better things to do with my time than go back to the onions and lay much. I did continue to plant multiples in the 12-inch spacings and that made it much easier to hoe with a stirrup hoe or wheel hoe and hand-weed. My greenhouse was 14’ x 20’ and I’d fill it with onion and shallot crops early and then move them to cold-frames outside in order to start new crops in the greenhouse. I would needed probably four times as much space if I didn’t use the ‘multiple’ planting pattern method with the onions.”

“Every farmer needs to find out what works for them,” Angela says of on-farm research. “Do they have to conserve space? What’s the best soil medium? On-farm research personalized things and answers immediate questions you have. It can be a lot of work, but it was always worth it.”

The late 1990s was when vegetable growers began to join Practical Farmers of Iowa. “It was very nice when PFI, which was mostly row-crop farmers at the time, embraced us and welcomed us,” Angela says. “I remember going to a  workshop on weeding where Dick Thompson spoke about using a stale seedbed weed management technique in his corn and soybean crops. I thought: ‘Wow, that could work for me, too.’”

“It was so nice to have an organization like PFI that supports research the farmer wants,” Angela says. “PFI’s research was cutting-edge because it was truly farmer-focused and beneficial to the smaller farmer. It was a ‘magical’ organization that helped us answer our questions.”

The original reports of Angela’s trials can be viewed on our website at the links below:

Much Ado about Onions and Potatoes (1999)