According to Iowa State University, 53% of the farmland in Iowa is rented. That is to say, the majority of the farm acres in the state are farmed by people who do not own that land. That does not, however, mean that those who own farmland but don’t farm it themselves cannot do their part when it comes to conservation. Case in point are Maggie McQuown and Steve Turman who own Resilient Farms near Red Oak and hosted a field day on June 15. The two shared how they have implemented numerous soil and water conservation strategies on their land by working closely with their farm operators, Bryan and Lisa Huff. As we learned at the field day, these strategies include cover crops, riparian buffers and prairie strips. 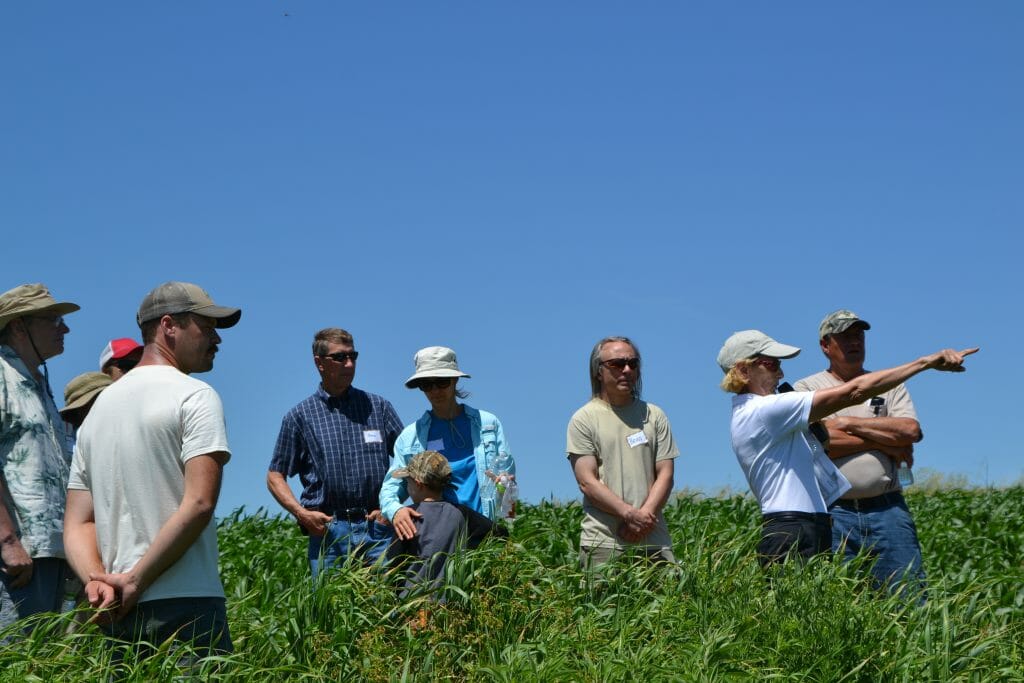 Maggie McQuown led attendees on a tour of their prairie strips where she pointed out several plant species native to Iowa.

“Pictures and words don’t do justice to how much work Maggie and Steve put into conservation,” Bryan Huff said at the field day, who has been farming Maggie and Steve’s land for several years. “It makes me be careful with what I do with my equipment to not interfere or harm the things they’ve put in. Everyone’s goal should be to leave the land better than they found it.” Maggie then told the crowd that she and Steve very much appreciate Bryan and Lisa’s extra work to accommodate the conservation strategies they’ve implemented. In fact, before implementing any new conservation strategy on the farm, (i.e., riparian buffers or prairie strips), Maggie and Steve will first share the ideas with the Huffs.

“It is fun to work with them,” Bryan said. “They do their homework and their research and then bring those ideas to me. A planned, 30-minute meeting can turn into a good, in-depth 2-hour conversation.” One thing that often comes up is how to accommodate the Huff’s current farm equipment. “I will ask them, ‘How wide of a lane do you need for your equipment?'” Maggie said. “And when we put in the riparian buffer, we made sure to put shrubs rather than trees along the field margin so that branches wouldn’t be hanging into the edge of the field and interfere with any tractors or combines.” 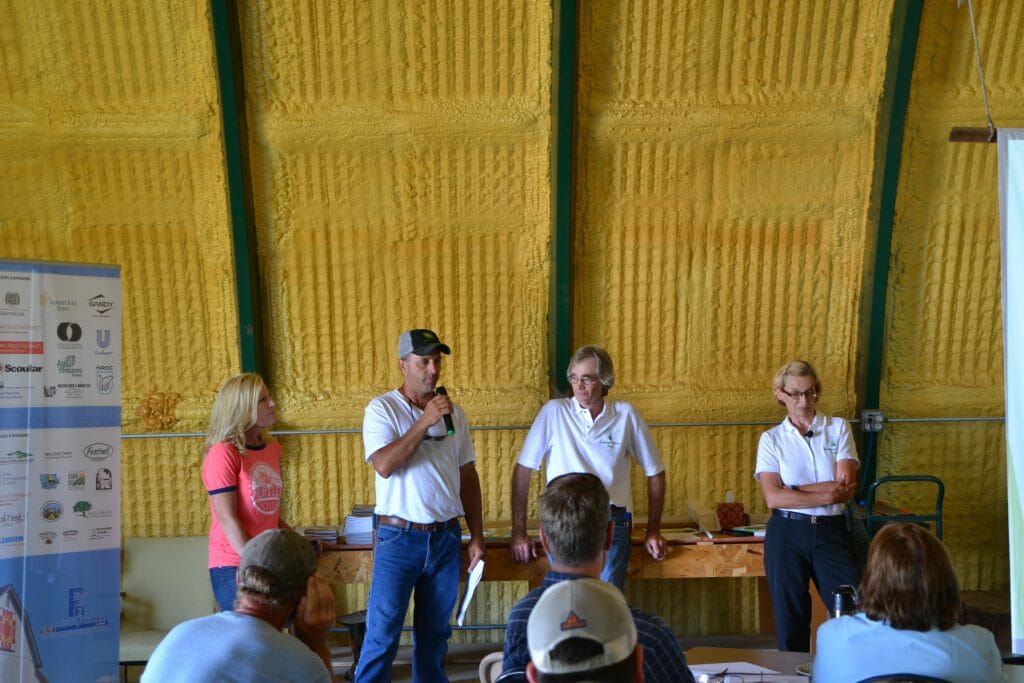 Lisa and Bryan Huff (on left) discuss with Steve and Maggie how they work together to make soil conservation strategies work.

Open, candid and regular communication is essential. “Sometimes my reaction to an idea is, ‘What could go wrong?'” Bryan said. “And my reaction to that,” Maggie replied,”is ‘But here are the benefits.'” “It’s also best to take a small piece of land and experiment with an idea first,” Steve added. That’s what they did a few years ago when they first tried cover crops on 23 acres on the farm. In the fall of 2013, Maggie secured some cost-share from the state to go towards cover crop seed and aerial application. She and the Huffs then split the remaining balance 50/50. They used this same arrangement for the next few years. In 2016, though, there was no cost-share available to them for cover crops so Maggie agreed to pick up the entire bill. “Because the Huffs were willing to keep trying cover crops, I was willing to pay for it,” Maggie said. Over the years, they’ve tried oats+radish cover crops ahead of corn (because they winter-kill) and cereal rye+rapeseed ahead of soybeans. “We’ve been learning how to plant into cover crop residue,” Bryan said. “But the cover crop roots have definitely helped the soil. We don’t see anymore soil washing over the field with the heavy rains.”

We next moved to the field where we got to observe the riparian buffer and prairie strips firsthand. Lindsey Barney, of the Iowa Department of Natural Resources, and Brad Riphagen, of Trees Forever, espoused the virtues of the mantra “right tree, right place” at the riparian buffer. Put simply, some tree species do well in a certain soil type while others thrive in another soil type. Together they helped Maggie and Steve select tree and shrub species native to Iowa and the Midwest to be planted along the creek that runs through the property. Maggie showed pictures of how, in the past, the creek would overflow and transport soil eroded from the field with heavy rains. The buffer, now (mostly) clear of marestail and reed canary grass, should help to stabilize the creek banks and keep nutrients from reaching the creek. The buffer was put in as part of a Conservation Reserve Program (CRP) contract Maggie and Steve entered into. Terms of the contract call for 300 trees per acre. Lindsey told us it is pretty standard to plant 600-700 trees per acre when starting to account for some loss due to death and depredation (usually from deer). 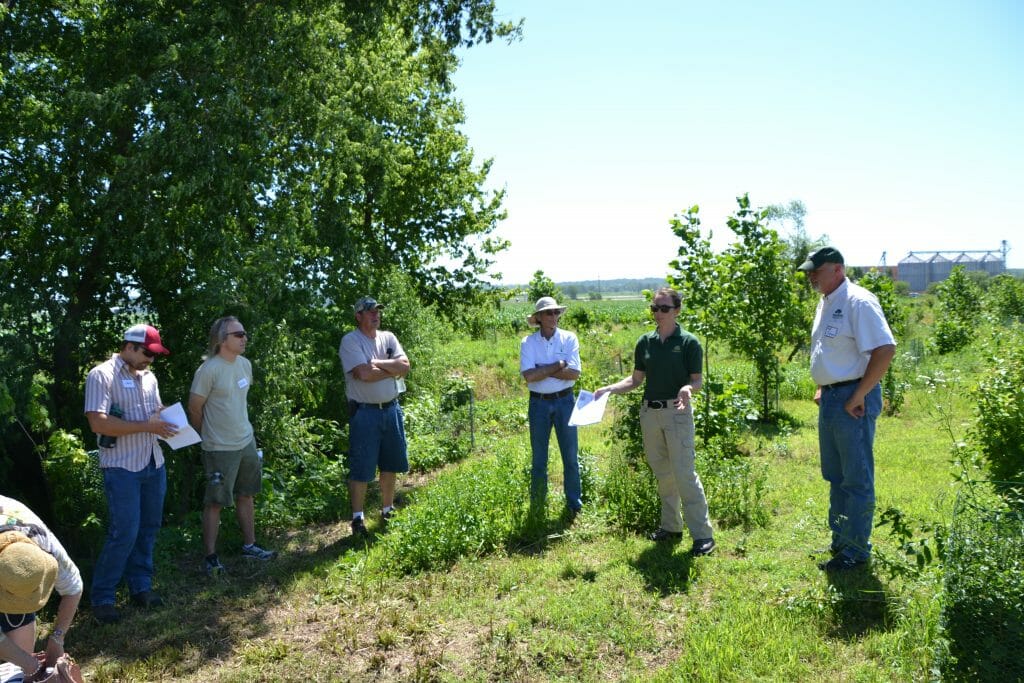 Lindsey Barney (speaking, second from right) of the Iowa DNR and Brad Riphagen (far right) of Trees Forever assisted Maggie and Steve with the riparian buffer. 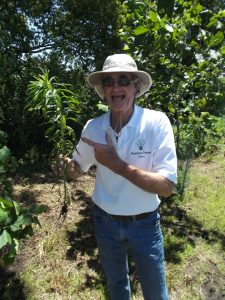 By hook or by crook (or by hand, weed whipper and mower) Maggie and Steve have worked tirelessly to keep marestail out of the buffer.

Maggie and Steve were among the first landowners that worked with the Iowa State University STRIPS program to seed prairie plant species in strategic locations on the farm. Maggie and Steve converted buffers that were previously in solely bromegrass to diverse prairie mixes. STRIPS stands for “Science-based Trials of Rowcrops Integrated with Prairie Strips.” The team of researchers at ISU have found that substituting 10% of a corn/soybean field to prairie strips can significantly reduce the amount of soil leaving the field. As Tim Youngquist of the team put it, the prairie species have deep roots and sturdy, strong stems (unlike brome) that hold up well to heavy rains and don’t allow water to wash the soil away. Patience is certainly required when considering prairie strips—it typically takes ~3 years for the strips to look vibrant and full of beautiful native species. 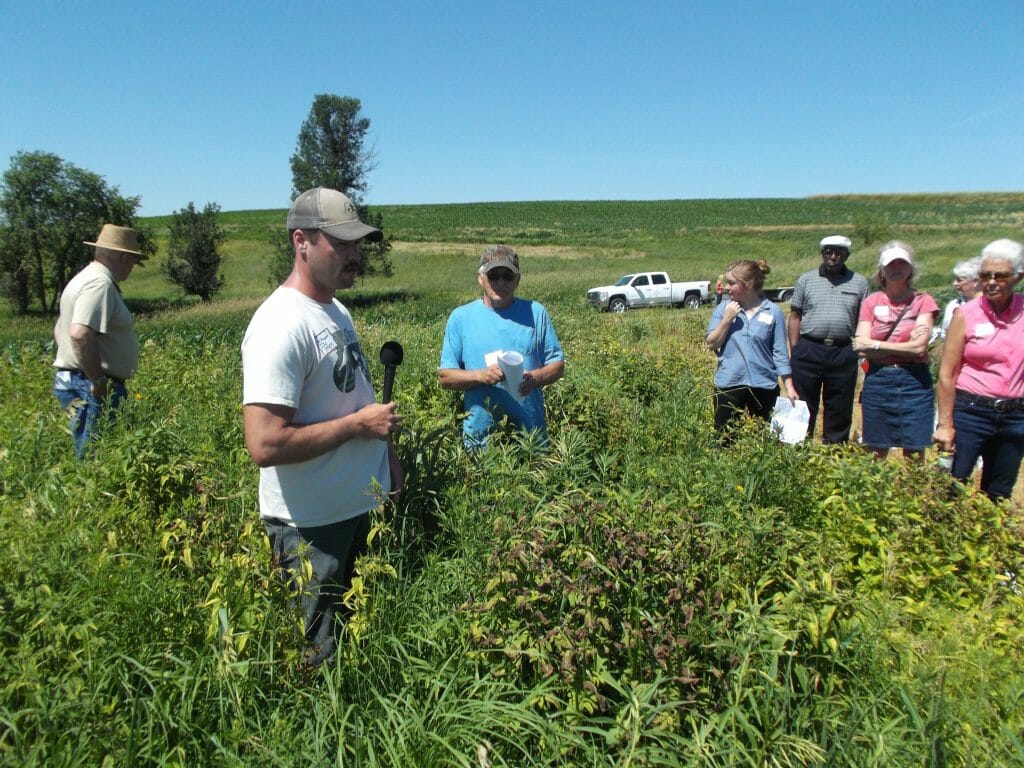 As we walked through the prairie strip, we would hear Maggie declare with gusto some of her favorite plant species as we came across them: “Oh, rattlesnake master! Wow, New England aster! Wild bergamot! Look, gray-headed coneflower!” 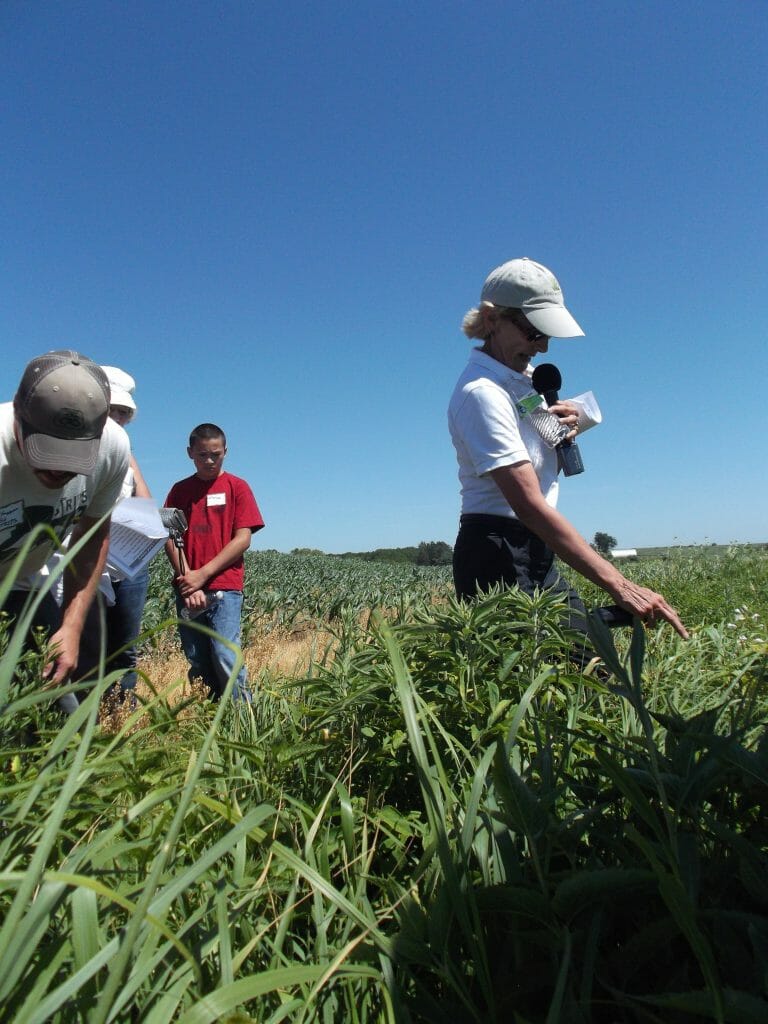 Learn more about what was discussed at the field day from Maggie’s presentation slides. The slides contain more photos and details of their conservation practices and efforts.

Maggie inherited her family’s Century Farm near Red Oak in 2011. Her great grandparents J.E. and Retta Taylor purchased the farm in 1899 and named it Pleasant Prospect. When Maggie and Steve moved to the farm in 2012, they renamed it Resilient Farms to reflect their goals of long-term sustainability and conservation for the farm. The 170-acre farm features 130 acres of corn-soybean row crops, a farmers market produce garden, a 118 year-old Victorian farmhouse, a new PassivHaus energy-efficient home, several historic farm buildings, plus multiple conservation practices dating back to the 1920’s. Thanks to Maggie and Steve for hosting and to Trees Forever for sponsoring the field day! Also be sure to check out the interview with Maggie and Steve on our podcast, On-Farm: Conversations with Practical Farmers. 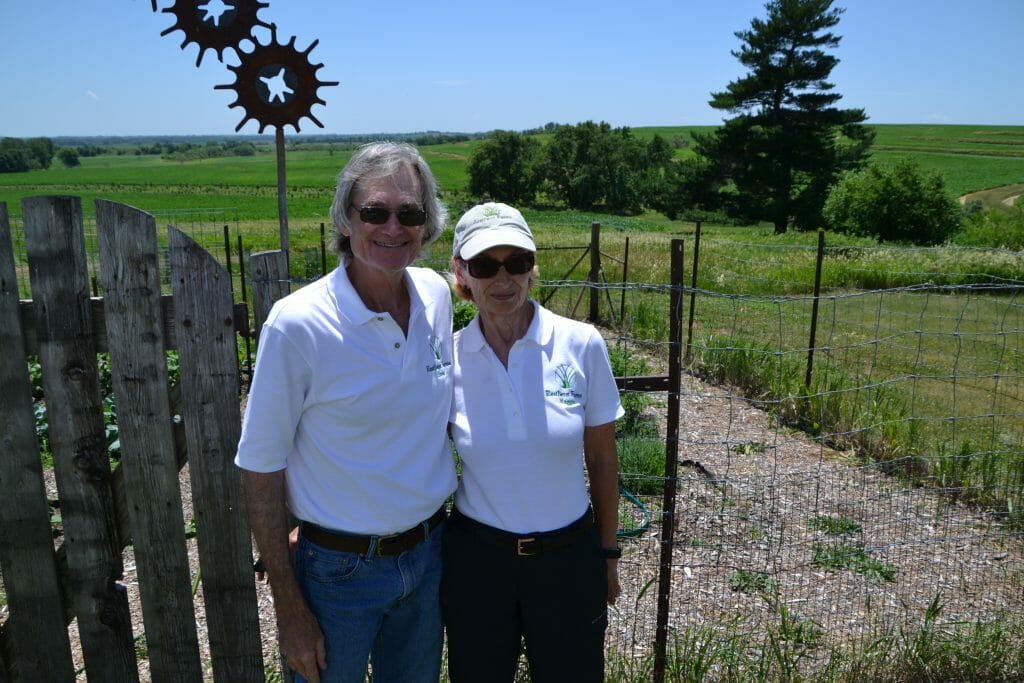