On a sweltering afternoon in mid-July, Marty and Mary Schnicker invited PFI and the public to their farm for a tour of their “giant” produce they grow for competition, and the regular produce they grow for farmers market. Attendees braved the heat in the high tunnel to see the impressive pumpkin plants, and were repeatedly amazed by the gargantuan pumkins, melons, cabbage, kohlrabi and onions.  Growing giant produce takes a lot of planning, space, and time. With few plants and few very large fruits, mistakes and bad weather can be devastating. “We only have one shot during the year; if anything goes wrong, it’s time to think about next year.” says Marty Schnicker. At competition there can be a good prize, but the work is mostly a labor of love – Marty does have a full-time job off the farm, and spends his evenings working with the plants.

Like many PFI members, Marty and Mary view their farm as a great place to raise their six children, providing endless opportunities for inquiry, experimentation, and self-reliance. Those opportunities exist for Marty, too. “I’m learning. I’m still learning. I’m going to learn every year.” 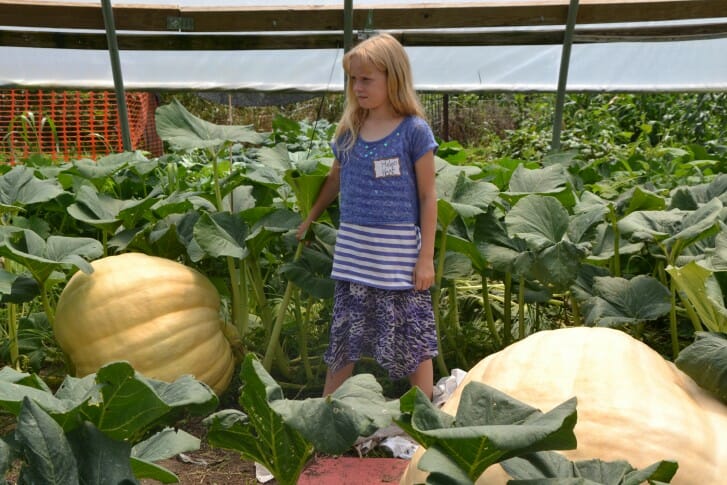 Helen Schnicker uncovers the growing pumpkins in the high tunnel.

Pumpkins and the High Tunnel

Plants are started the last week of March to be ready for the State Fair. To have the high tunnel ready early enough, Marty raises a mustard cover crop in the fall, mows in down, wets the soil and lays plastic over it. “If you don’t put the plastic down, it will be like a desert in there in March, and even if you try to wet it the water will just sit on top of the soil. When I’m ready to grow I pull the plastic back and start planting for farmers market. But where the [giant] plant is going to go, I lay a soil cable in that warms the soil to 78-82 degrees, only for that plant. We put a hoop inside the hoophouse, sometimes with a little heat lamp on a timer. The little hoop comes off during the last week of April or first week of May.”

“You can see I only have one pumpkin plant in this tunnel, but before the plant gets to big we get a lot of stuff done in here for farmers market.” Marty moves his pumpkin plant around in the high tunnel, but noted the mustard cover crop acts as a fumigant and the plastic provides some solarization, both of which reduce disease pressure in the soil.

“This is maybe the biggest plant I have growing in here, but right now it has 3 pumpkins on it. Right now the pumpkins are about 500 lb, 400 lb, and 200 lb.  In one day, this pumpkin produced 80 lb of fruit, among all the pumpkins. Last year our State Fair pumpkin was putting on 54 lbs per day.” By the State Fair this year, Marty expects to have at least a 700 lb pumpkin. Pumpkins in the high tunnel are about 75 days from pollination when they’re harvested.

Marty only allows the pumpkin to have a main vine and a secondary vine; any additional vines are pruned off. “You can grow a 1,000 lb pumpkin on a side-vine, but typically you want it about 15 ft out on the main vine.” Some of the pumpkins are resting on paper mill fabric – the fabric used on assembly line belts at paper mills. This allow Marty move the pumpkin if needed. On sand only, the pumpkins may start to sink and will be impossible to move.

“The seed that grew this pumpkin came from a world-record pumpkin – 2,624 lb – grown in Belgium. It cost… enough. But you’re buying the genetics, and the purse for the largest pumpkin at a competition can be $10,000.” 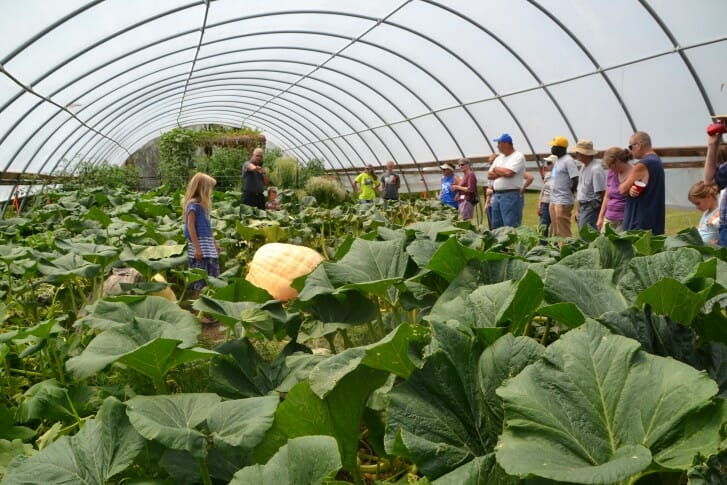 Leaves collect a lot of moisture for the plant. Marty keeps a fan blowing and the vines powdered to make sure water doesn’t collect and cause a rotting spot.

“The night before the plant blooms it has a nice glow to it. We’ll cover it with a plastic bag and close it with string; in the morning we’ll hand-pollinate it, then cover it again with the plastic bag. Usually the State Fair pumpkins are early enough there’s nothing else blooming that will cross pollinate, but we hand-pollinate all the competition pumpkins. Then you know you have a true cross of what you want to do. A guy from Illinois has the world-record with his crossed-pumpkin.”

Pumpkin plants put out a main runner (vine) and a reverse runner; melons will put out several runs. Marty picks out 4 or 5 runs, trains them in different directions, and keeps the rest of runs pruned off. “This week-old canteloupe has good length to it, it might grow to 40-50 lb. I have done a 50 lb canteloupe before. I just have to keep it alive.” For watermelons and canteloupe, it’s very important to keep them well-watered. Around noon each melon plant gets 5 gal. on water. “If you don’t do this with the melons, they get a “hollow heart” in the center. I set out a bucket of water at each plant and at noon, in the heat of the day, one of the kids goes out and dumps it.” This practice keeps Marty’s melons heavy in the middle. 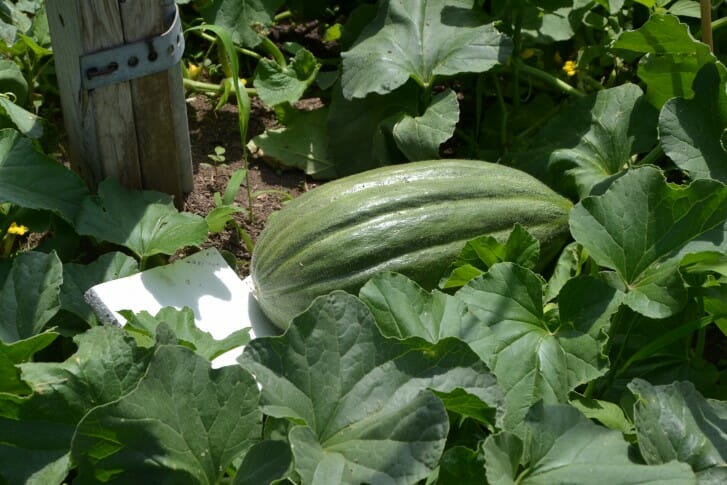 “I’m going to cut this vine off after the tour – it’s taking all the energy from the plant. You can get a double vine, triple vine; when they get this wide and flat it’s called a ribbon vine.” 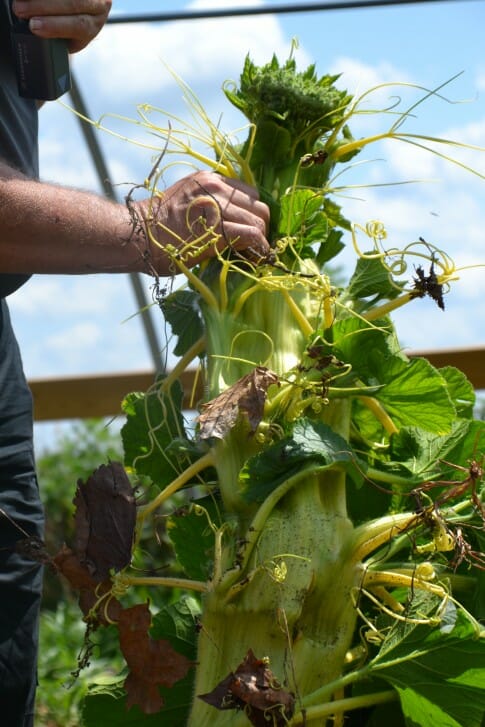 This problematic vine is ribboning.

Marty planted watermelons outside early, but ran into a week of unexpected snow and constant rain. “The soil temperature went from 82 to 65 degrees – I lost all of my watermelon plants.” This year he won’t have anything for the State Fair, since he had to re-germinate and start over. These melons will all be for fall competition. “Last week these melons were the size of pop cans. They’re growing about 2 in. in circumference a day. They’ll all get a platform lift with the paper mill fabric. They are Carolina-cross, and if all goes right, they’ll fill up their holders (platforms). Weeding is constant!” 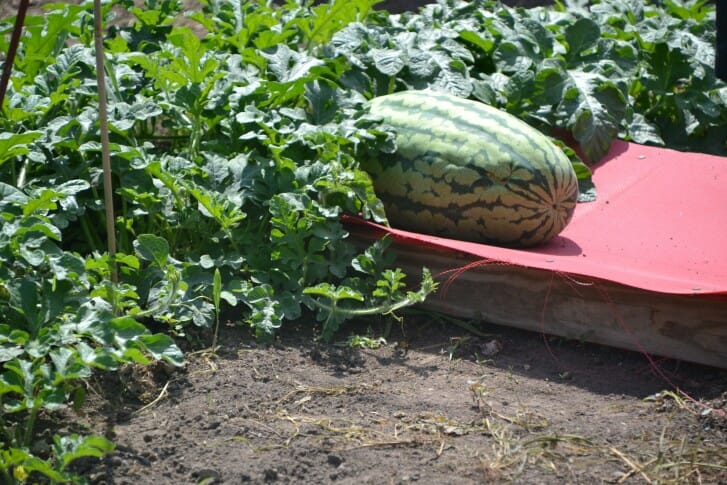 “To pollinate, we just take the male blossom in hand and rub them directly on the female flowers of other plants, creating cross-pollination on different plants to get what we want, genetics-wise. You can use a paintbrush but we had trouble getting the pollen off the brush.”

Until about a week before the fair, the pumpkins and melons are covered with a cloth to protect them from the sun. “For pumpkins, after a week or 10 days at the fair, the coloring on the pumpkin will be about twice as dark. An orange vine usually indicates an orange pumpkin; a green vine indicates more of a cream-color.” 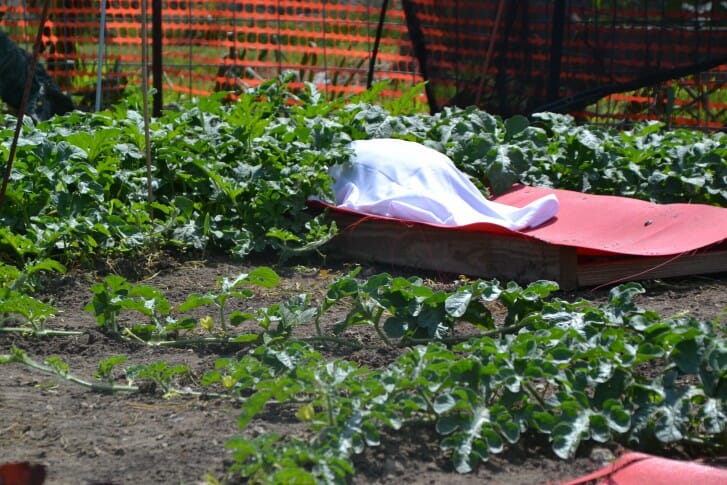 Marty creates a slight mound in the bed so the crown of each plant is slightly raised. This prevents water from pooling around the plant. The stakes in the ground keep the vines from blowing away from their trained course. For disease management, it’s all about prevention. “By the time you see something going wrong it’s already too late. It’s all about good air flow, plenty of water, and healthy soil.” 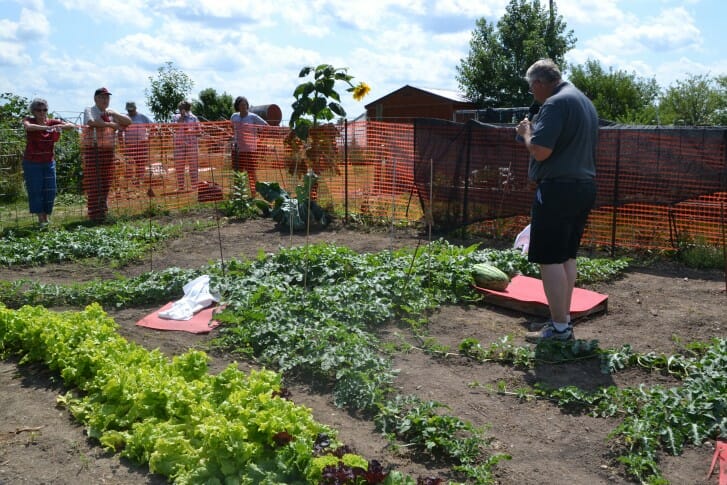 The pumpkin on the pallet will grow to fill the length of the pallet, and may have a 70-inch circumference.

Kohlrabi around Marty’s farm are currently about 20 lb each. Marty is hoping the kohlrabi will be 30 lb by State Fair time. Even at this size, they are tender on the inside. Same with their German Giant radishes, which are the size of softballs. Plenty of water and the crop variety keep these vegetables from becoming woody as they size up. 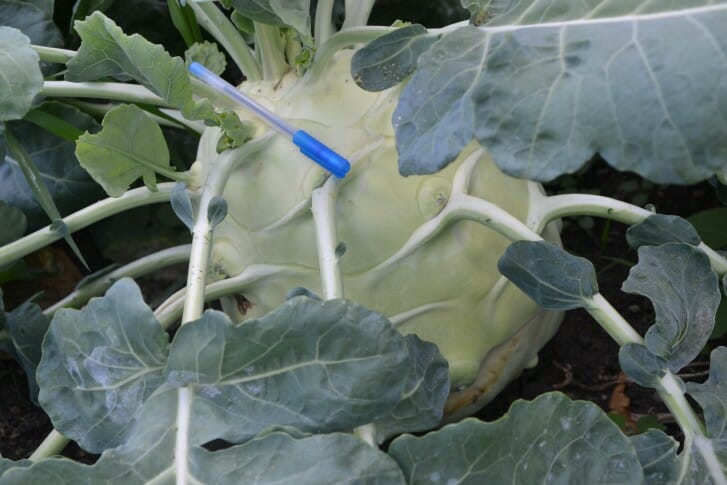 A 20 lb kohlrabi, holding a pen for comparison. 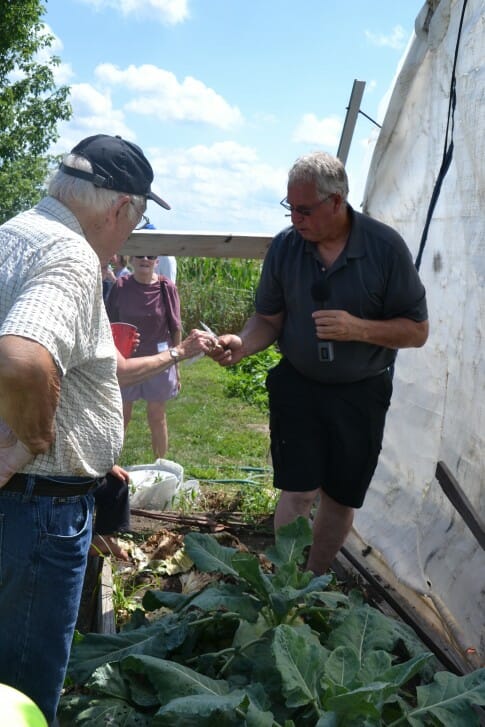 Marty cuts a slice from a giant kohlrabi.

Mary Schnicker sells produce at the Mt. Pleasant farmers market on Wednesdays and Saturdays.  Their onion sets come from Dixondale Farms in Carrizo Springs, Texas. The Schnicker’s onions are just starting to mature; she’s been taking a few Red Wing onions, which are their intermediate, earlier maturing variety, to market. “Most of our onions still have some growing to do, even if they’re starting to fall over. The number of leaves indicate how many rings the onion will have; these look pretty good.” The red onions in the bed below are Red Candy, others are Elsie and White Spanish Sweet. “If you want things to grow big, give them room.” Marty starts his onion as early as possible, and top-dresses them with 0-30-30 when they’re ready to bulb. 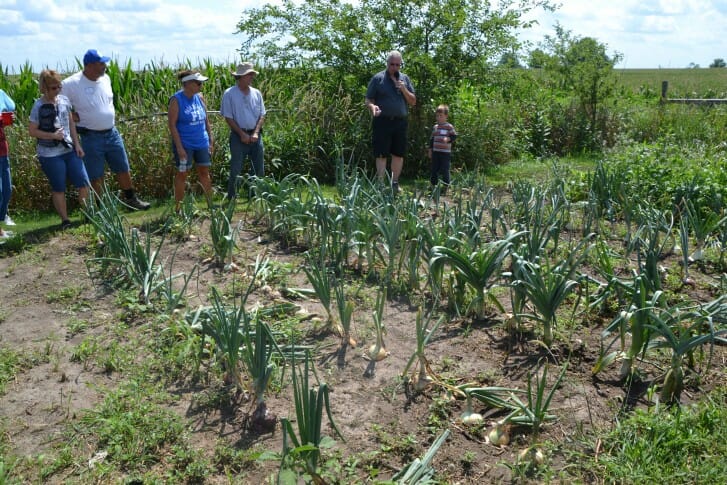 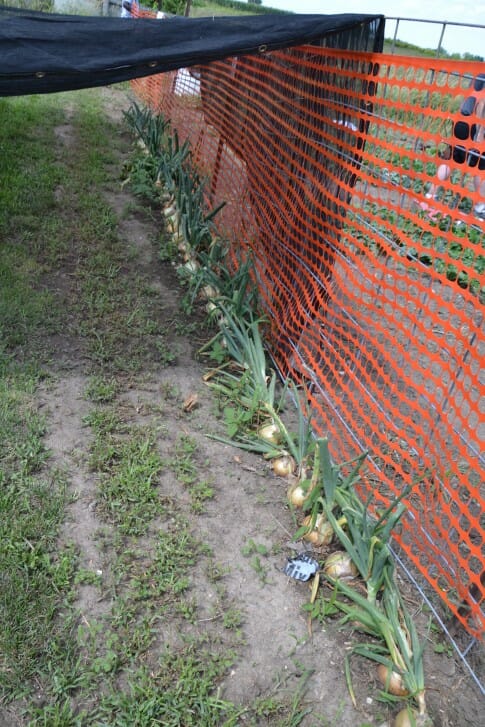 Market onions line the wind fence on a watermelon bed.

Elsie onions destined to be “giants” are started in the basement with grow lights in November. Though it’s tough to keep them alive all winter, Marty’s onions have been the largest every year at the State Fair since he’s had them. “Right now they’re about 3 lb, by the Fair they’ll be 5.5-6 lb. In the U.K., where these seeds come from, they can grow 18 lb onions that sit in a lawn chair. You can tell how big an onion will get by the number of leaves; if you start to get 25-28 leaves on it, that’s when know you’re going to have an onion.” These long-day onions put on leaves until the longest day of the year, then they start to build their bulb. The tomato cages keep the 4 ft-tall onions from tipping over. By the end of July they’ll be 21-22 inches in circumference (about the circumference of a coffee can).  Marty likes to collect seed from some of the large onions, but lost some while over-wintering them. 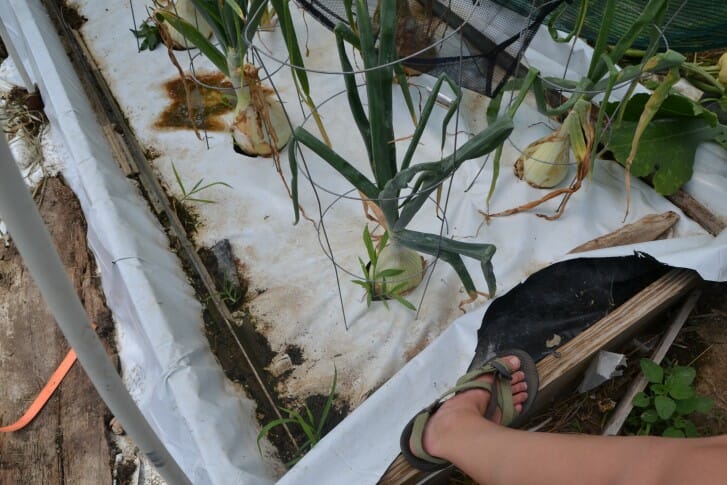 Big onions that are still growing.

Marty just took a 30 lb cabbage to the Henry County Fair, where it earned Best in Show. The varieties planted at the farm are Tropic Giant and Megaton. “I’ve never had a Megaton cabbage split, ever. They are round and perfect and grow to 20-30 lb.” Marty spaces his cabbage 6 ft apart. 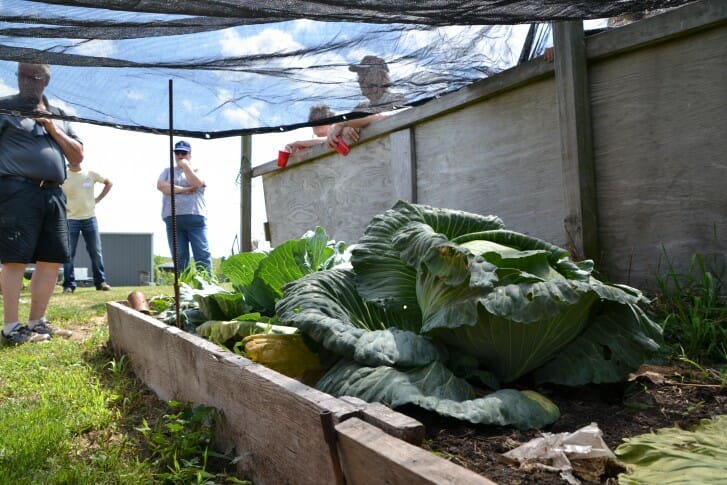 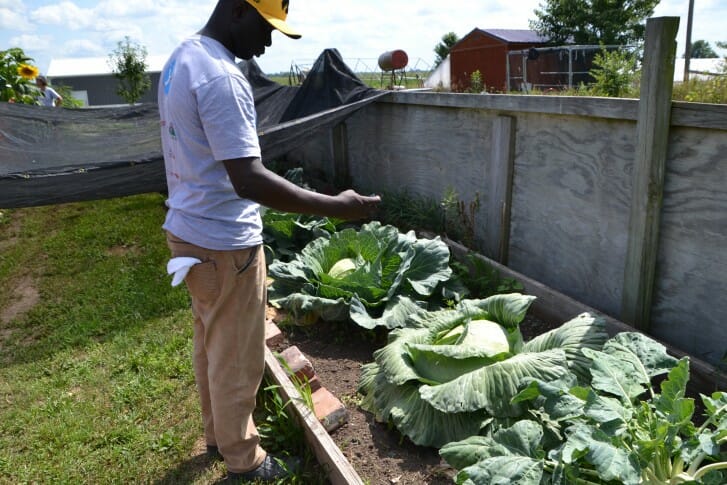 One year Marty used a bottomless bucket to protect the plant, and didn’t get the bucket off in time and had to leave it. When they harvested the cauliflower and took it to market, everyone wanted to know how we kept the head so white. “The leaves kept the head covered; it couldn’t see the sun. So that’s what we do now – we grow them in buckets. We just have to make sure the heads don’t get bigger than the buckets!” 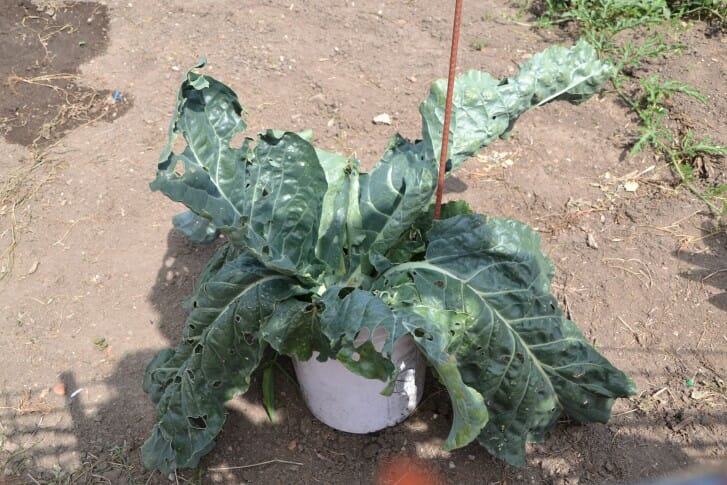 Due to disease pressure, Marty is solarizing some of his beds. Before laying the plastic, Marty grew a stand of Pacific Gold Mustard. He broadcast seeded and had a dense stand with few weeds.  Just as it was ready to bloom, he mowed it down, tilled it under, and covered it with plastic. In the fall he’ll put in a crop of winter rye, then prepare in the spring for pumpkins, moving the solarization to the other side. “The double cover-crop with solarization supresses disease, and kills insect pests and weed seeds. It’s worth taking that time off to let it rest, even though it seems like that year is always the best one to grow pumpkins!” 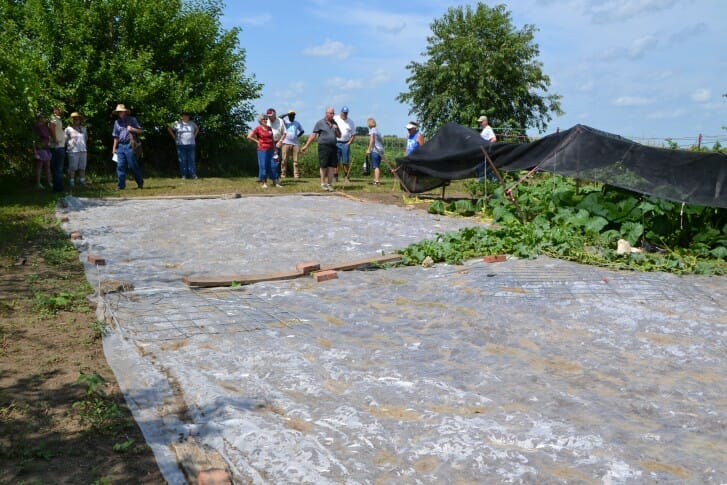 Marty has twice held the state record for long gourds (measured in length), which he grows on a wood trellis. “They look like Bam-Bam clubs. My goal is to get one set at the top and get it so long it touches the ground. The world-record is 145 in.; my longest is 114 in. The current state record is 121 in. At peak growth you want to see about 5-7 in. in length per day.” 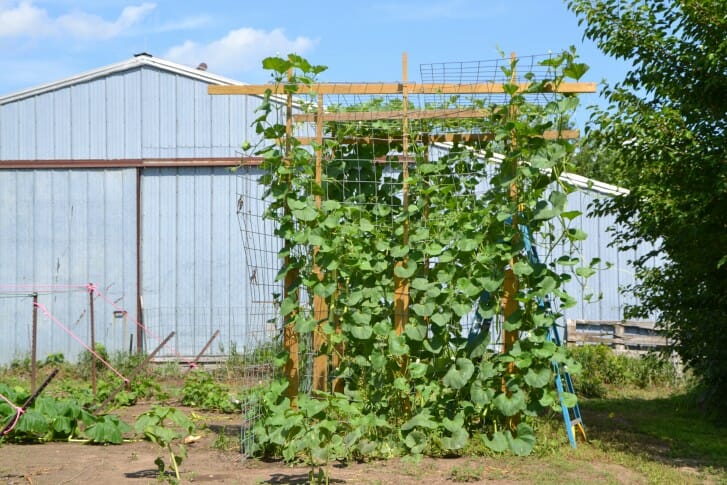 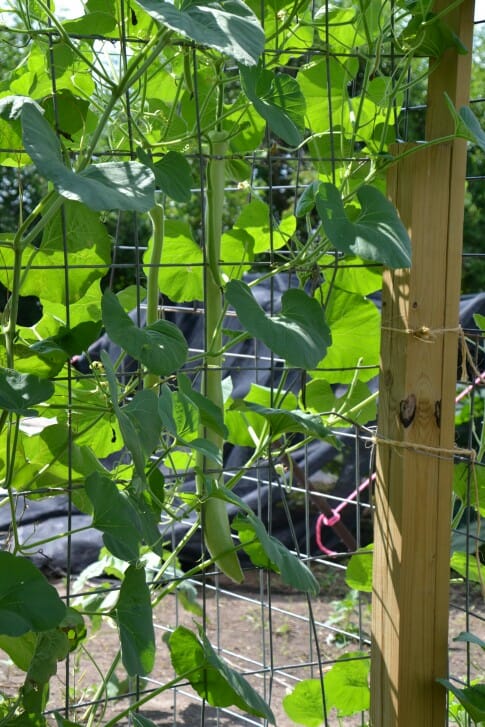 A long-gourd getting started on the trellis.

Thanks to the Schnicker family for hosting a great field day on a hot, sunny day! 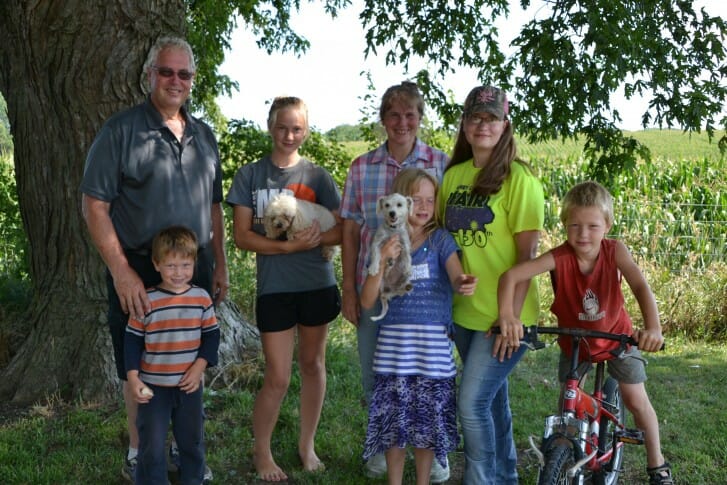 Marty and Mary Schnicker with 5 of their 6 children.

Also, thank you to Iowa Farmers Union for providing additional support for this field day.