If you’re a goat or sheep farmer – you’re probably familiar with Haemonchus contortus (barber’s pole worm) – a worm responsible for the biggest disease problem of small ruminants. When not adequately controlled this worm may cause death. Unfortunaly, due to the misuse and overuse of dewormers over many years, resistance to dewormers is a huge problem that threatens the viability of sheep and goat farming.

The FAMACHA system was developed to decrease dewormer resistance by selectively deworming only those animals that require treatment – instead of the whole herd. When a farmer selectively deworms, the worm eggs produced by the few resistant worms that survive treatment are greatly diluted by all the eggs produced by the animals that did not receive treatment. In contrast, when all animals in a herd are dewormed, only resistant worms that survive the treatment will produce all the eggs that form the next generation of worms.

Eric and Deb Finch, who raise meat goats near State Center, have implemented the FAMACHA system on their farm. They invited Dr. Paul Plummer, an Iowa State veterinarian and dairy goat farmer, to their field day to give a training to 30 farmers before taking a tour of the farm. 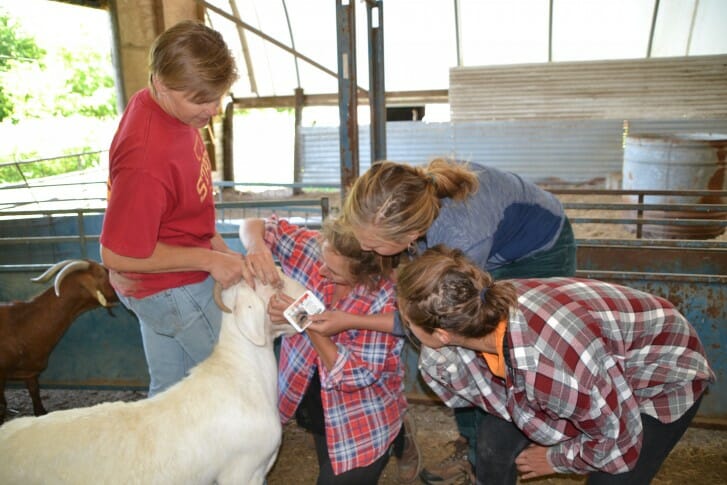 Deb Finch (left) hold a her goat, while PFI members inspect a goat’s eyelid to diagnos the anemia level in the goat, which is correlated to barber’s pole worm load. By monitoring anemia, resilient and susceptible animals can be identified. 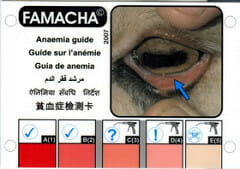 A FAMACHA score card which can be obtained through attending an official training. Credit: http://www.sheep101.info/201/parasite.html

Essentially, the barber’s pole worm causes anemia because it sucks the blood of its host. By using the FAMACHA score system, you’re able to give an individual animal a 1-5 score, depending on the level of anemia shown in the mucous membranes of the eyelid. Depending on the severity of anemia, you’ll know to deworm or not to deworm each animal.

Sheep and goats both are inflicted with this parasite, but it seems as though goats are more sensitive to it. Dr. Plummer explained that the worm larvae congregate in the bottom two inches of a blade of grass, close to the ground. “Sheep graze grass close to ground, so most of the infected sheep have died off and over many years, genetic resilience has been built up in the sheep that have lived. Goats have not built up this reliance because goats are not graziers, they’re browsers that we force to graze,” said Dr. Plummer. As a reminder, always graze above two inches, preferably vegetation that is six to eight inches tall.

It’s important to take a FAMACHA training to learn how frequently you should score your animals, to learn what class of drugs would be effective on your farm, and to understand the life cycle of the Haemonchus contortus worm. An excellent resource we have in Iowa is Dr. Paul Plummer at Iowa State University. A list of FAMACHA trainings can be found at the American Consortium for Small Ruminant Parasite Control website. 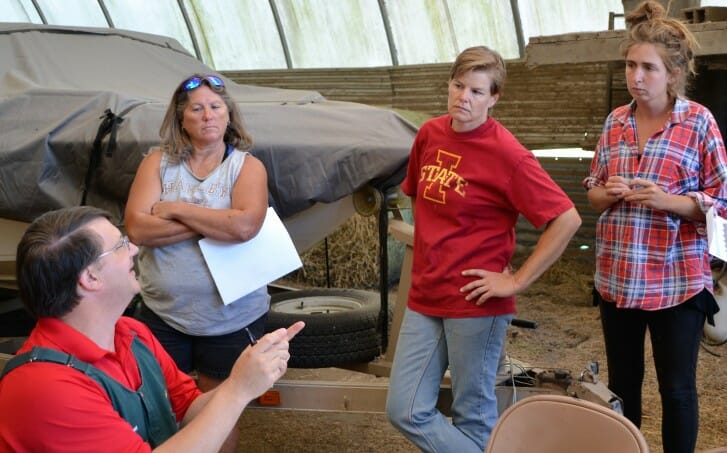 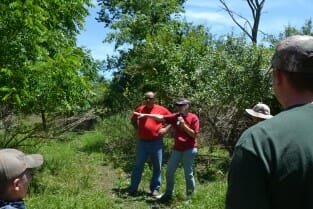 Deb stands with Eric and explains the different species the goats browse on – including red cedars.

After lunch, 37 field day attendees loaded a hayrack to visit the Finch’s goats who were browsing in an oak savanna. We passed by a 40 acre hay field that was surrounded by hills and trees. Part of this was in a Conservation Reserve Program (CRP) where many trees had been planted. When the land comes out of the CRP program, it will be opened up to allow goats in. Goats are browsers by nature and prefer to browse on brush and trees rather than graze grass, so the Finch’s put their goat herd on wooded lands – to browse on invasive species such as multi-flora rose and honeysuckle while thriving in the habitat they’re most suited to. In addition to controlling invasive species, browsing goats results in less internal parasite problems.

Deb and Eric explained that their Boer/Kiko crossbred goats have cleared most everything from the ground to six foot high in the oak savannah. They’ve observed the impact the goats had on the savanna; in year one the goats stripped everything, in year two there was not much vegetation regrowth, and in year three new shoots started growing. Ideally, they want to preserve the big oaks (which the goats don’t seem to bother much) and encourage new oak seedlings and grasses to come back in order to create a viable pasture. 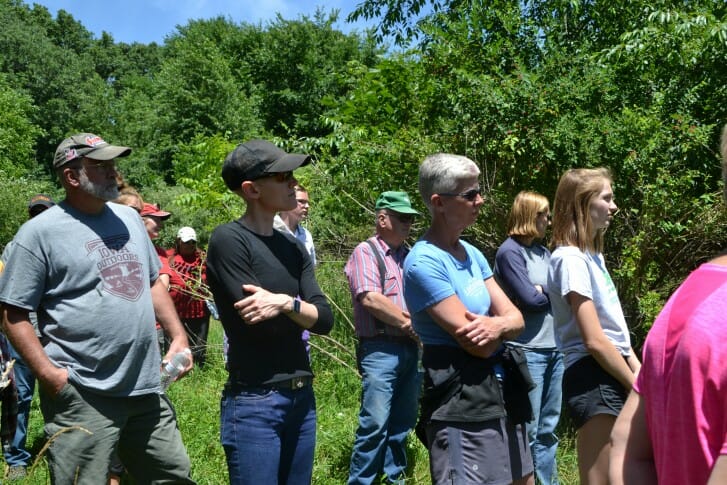 Fellow goat farmers listen to the Finch’s while on a tour through the woods.

The key to successfully browsing goats in wooded areas is to have a hot enough fence. The Finch’s use a wide impedance fencer with a 4 to 6 joule output to charge strands of ElectroNet. “A solar charger isn’t hot enough for goats; you never want below 3,000 volts, you want 5,000 to 7,000 volts to keep goats in” said Eric. The water source for the goats is the creek, which is fed by nearby Hendrickson Marsh. Luckily, they have not had issues with predators, mentioning they have plenty of rabbits and pheasants for coyotes to prey on. They’ve had the most issues with deer when bucks are in rut. “They chase after females and get stuck in the ElectroNet fence and ruin it,” mentioned Eric.

The Finch’s sell live goats to customers who come out to the farm and purchase them. The majority of their customer base is comprised of recent immigrant communities in central Iowa, mostly from Marshalltown. Goat meat is highly sought after among non-Caucasian consumers. To learn more about Deb and Eric’s marketing strategies, see Deb’s presentation from the 2017 PFI Annual Conference. To hear an interview with Deb about her farm and field day, check out the PFI podcast, On-Farm.

Thank you to the Natural Resources Conservation Service and the McKnight Foundation for funding this field day. Thank you to Dr. Kaplan’s lab at the University of Georgia for providing training materials, Dr. Paul Plummer for teaching the FAMACHA workshop, and to Deb and Eric for hosting such an informative event! 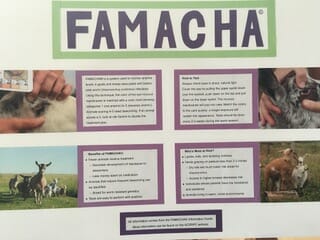