“The definition of experience,” says Dean Henry, “What you get when you’re really looking for something different. We’ve had a lot of those things happen. But, we persist.”

Dean and Judy Henry have been growing fruit near Nevada for over 50 years. They have 40 acres in horticultural crops, mostly orchard fruit and brambles, and about 100 acres devoted to DNR, to “raising deer,” as Dean jokes. The soil is fairly light soil, underlain with sand and gravel. Across the crick they have some black soil with so much clay you can’t work it until July. “We often use that for pumpkins,” says Dean. “We don’t grow pumpkins because I enjoy the job, we grow pumpkins to help sell apples.” 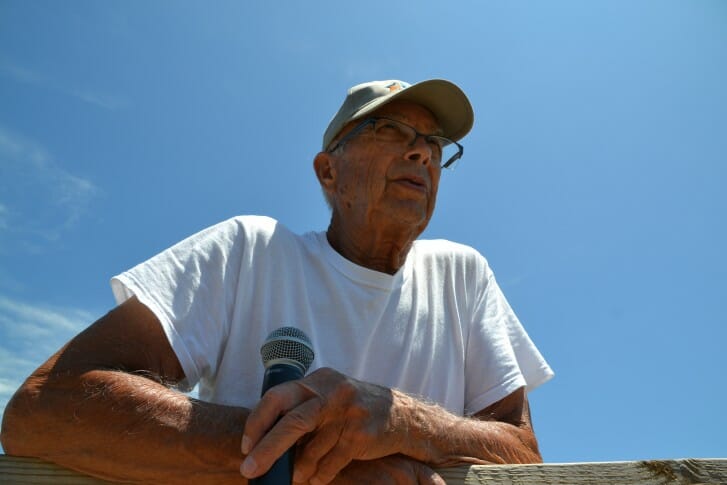 A thunderstorm chased us inside to start our field day at Berry Patch Farm on June 14, but it was the perfect setting to meet everyone in the room and for Joe Hannan’s grafting demonstration. When the storm cleared, it was time for lunch (brats provided by Niman Ranch) and strawberry shortcake, and the outdoor portion of the field day on grafting, summer pruning, and alternative fruit production. Owner Dean Henry and farm manager Matt Howieson toured attendees through the farm on hayracks, pausing to discuss bush cherries, blueberries, black currants, gooseberries, honeyberry, and gogi. Check out the photos and videos below for tips from Dean and ISU extension specialist Joe Hannan.

“When you read the general literature on orcharding, you won’t find a lot of help on “pedestrian” orcharding, as they call it. With U-pick, you can’t have any ladders for insurance reasons, and thus you sacrifice a lot of your yield. With u-pick, you need to go for maximum acceptance; if you’re customers are happy, you’re happy. For this reason I’ve always been interested in dwarfing rootstock and pruning techniques. We haven’t always done a good job of that, the old tart cherry trees along the drive are a good example of that.”

The first way to achieve short trees is to use a dwarf rootstock. “Geisla rootstock for cherry is a series developed as a dwarfing rootstock. The nurseries got a hold of these and adapted them for sweet cherries. That didn’t do me any good! I thought I’d outsmart them, and ordered the rootstock to graft on my own. The timing didn’t work out, so we ended up planting out the rootstock and grafted them in the field. The results haven’t been too good. We have #5, #6 and #12 Geisla rootstocks. We had to wait about 3 years for the rootstocks; we began to plan about 8 years ago. The Number One lesson is, if you want to attract deer, plant cherry trees. The deer are in charge of the pruning program here. We have started working on the deer fencing; electric fencing is unmanageable for us, especially with so many visitors. Out of the 500 trees we planted last spring, we lost about half. At that point you start thinking it’s worth money to install a deer fence.”

“The other way to get short trees is to summer prune. Dormant pruning (in the winter) encourages growth; if you’re interested in small trees that’s not the time to do it. Summer pruning occurs when the terminal bud emerges; when the trees have stopped growing for the year, and you’re beyond the window for fire blight.”

Summer pruning also allows more light and air to get to the center of the tree. This allows you to get more fruit set toward the interior of the tree, reduces the volume of product you might need to use, and lessens the ability of diseases to linger among the foliage.

Tips of other growers at the field day: If you’re pruning water sprouts, especially from the rootstock, it is better to rip them out that to cut them off. The jagged cut will still heal over, but the plant won’t set a new bud there. If you haven’t pruned in several years, you need to take a few years to catch up – doing the full pruning at once will distress the tree. For using Apogee (a growth regulator that also may improve fruit set), Emma Johnson of Buffalo Ridge Orchard and Dean both agree that it might work to apply just after bloom. By the time the Apogee becomes active, the timing will be about right. 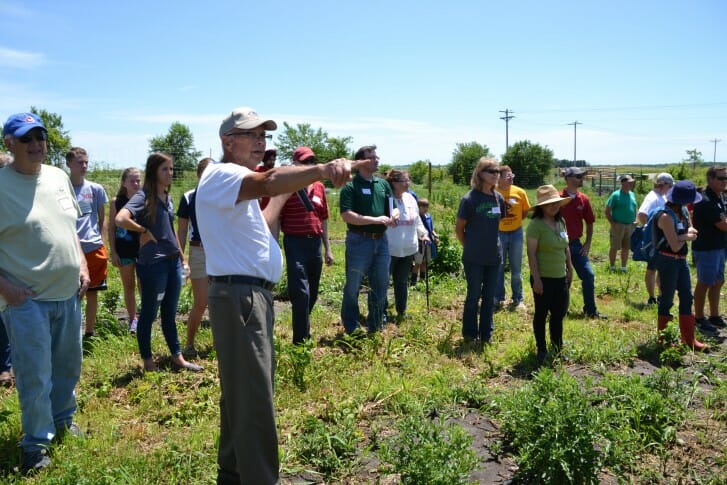 “We have 3-4 types of cherries on the farm; these are bush cherries. They’re more popular in Canada, and are supposed to be hardy to all types of weather. “The bush cherries don’t get too out of hand – the largest ones I’ve seen is 8 ft tall. The taste of the cherry is an improvement over our Montmorency – it is not as tart, it is darker red, the juice is red, and it probably will be a little earlier. The foliage on them is beautiful and looks like it really wants to grow.”

About ground cover between his cherry trees: “The old theory is, you can plant nice grass, or you can just mow it and you’ll have bluegrass anyway.”
“People are always asking me about spacing. It really depends on the equipment you have. We have a 6 ft wide mower, so when these fill out we’ll have a 6-ft spacing between rows.” Dean does, like many farms, struggle with thistle. “The only way that seems to beat thistle is Round-Up over and over again. We had a mishap last year; the guy putting on the Round-Up got too close to those trees and we lost about 200 of them. That type of thing is the reason we might stand a few more weeds than we’d like. The man doing the work admitted to me he got too close – it wasn’t even a regular sprayer it was a spinner with a hood on it. So that’s a lesson we’ve learned.” Joe Hannan also noted that if you’re planning a late-summer herbicide application, it’s better to go with an herbicide that doesn’t translocate, like Round-Up does. 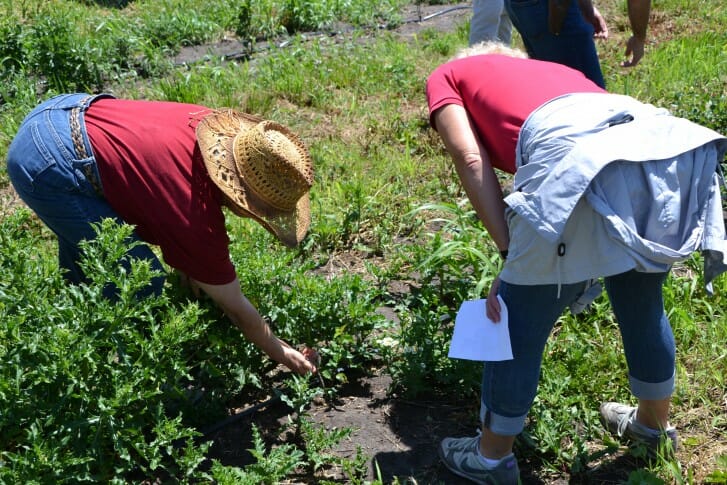 Kathy Dice and Linda Naeve check out the bush cherries. 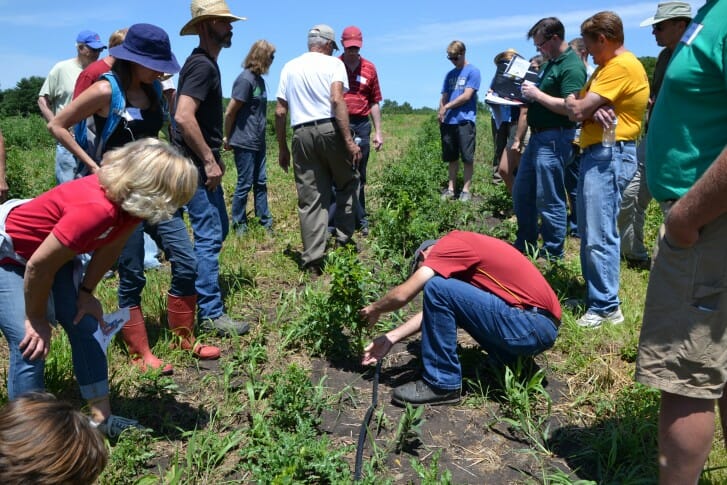 Joe Hannan inspects the grafting job on a bush cherry.

The grafted bud in this photo was not successful, and Dean will re-graft it this year. “I think we didn’t have a lot of success on these, probably between 10% – 30% success.” 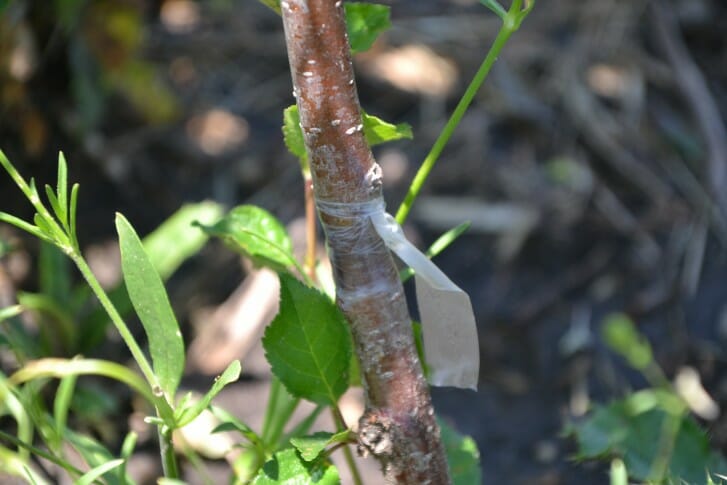 Dean recommends building the deer fence before you plant the cherries. “The bush cherries have survived deer damage, as you can see. The deer don’t seem to like them as well as our other cherry trees. That in itself would be a saving grace for me.” 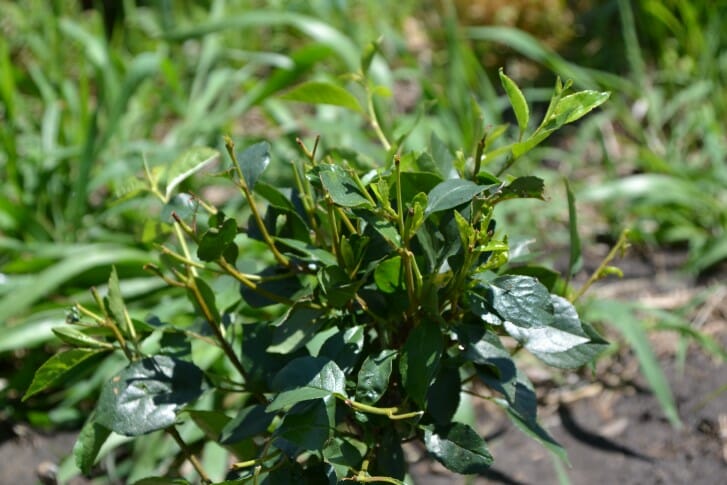 This 5-minute video shows a grafting demonstration by Joe Hannan. Below are some close-up shots of Joe’s razor sliding under the bud and then making a 45-degree back cut. 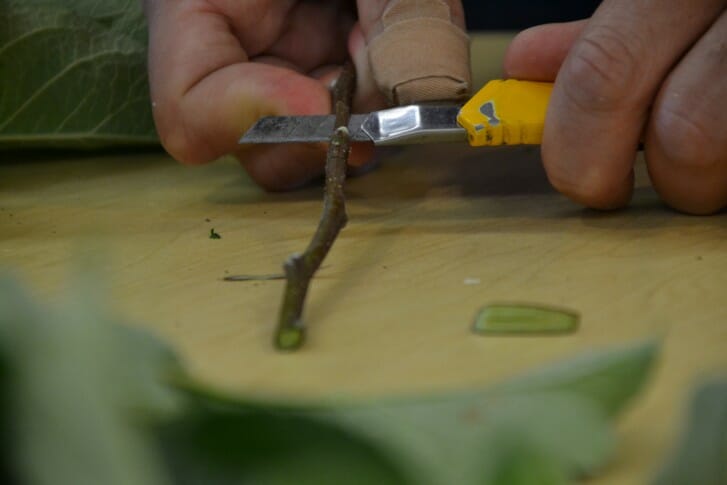 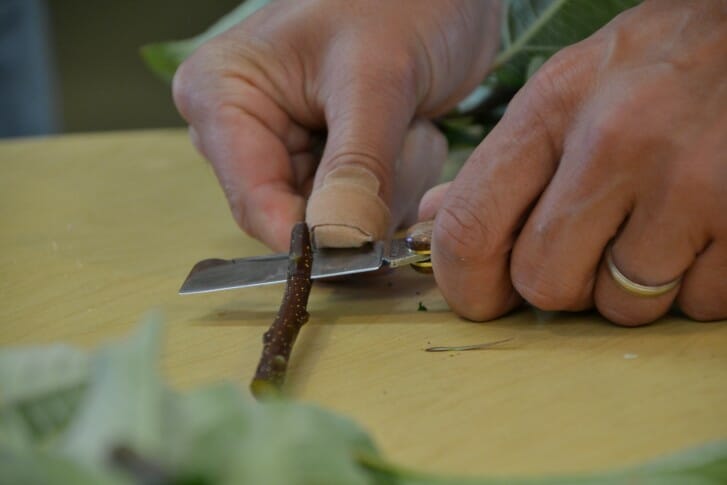 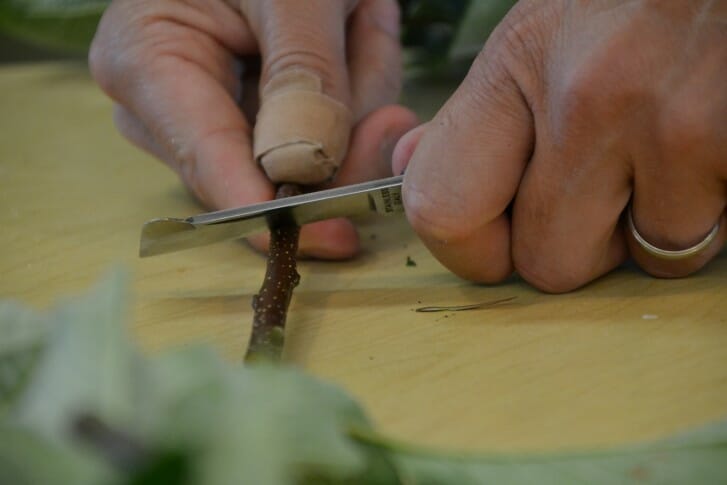 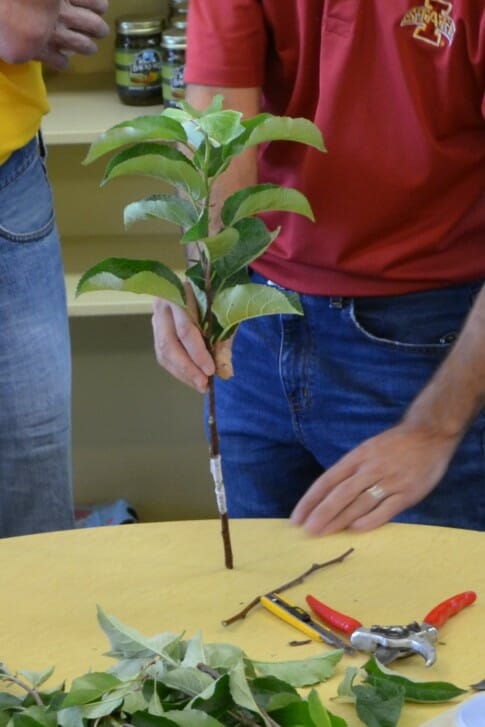 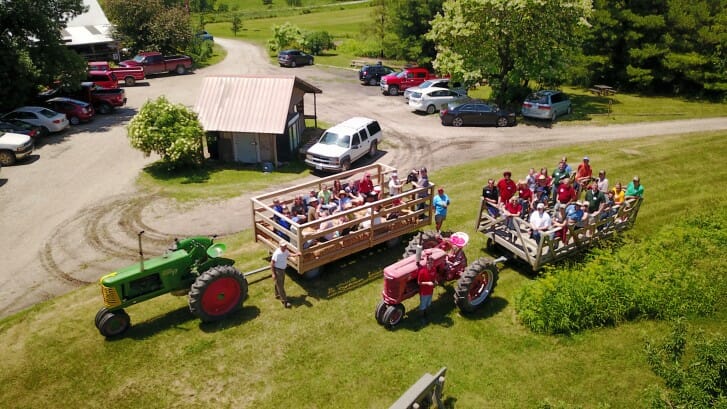 “We started with strawberries, and over the years have added raspberries, cherries and apples, and trying out a few new things, like honeyberry, elderberry. we’ve always had a few odds and ends like currants and gooseberries. We’ve had sort of a niche market for those crops with Europeans, and have shipped berries to Florida customers for a few years. We’ve had varying success with some of these things, and the idea for today is to show you some of these things in the field, to see if you want to try them, or not.” 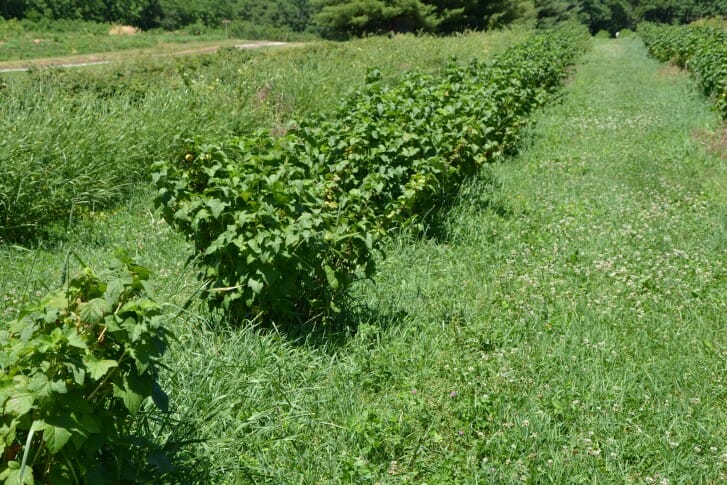 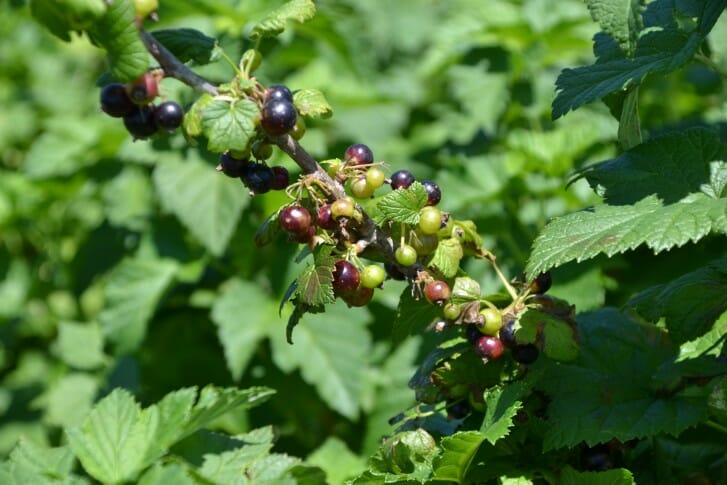 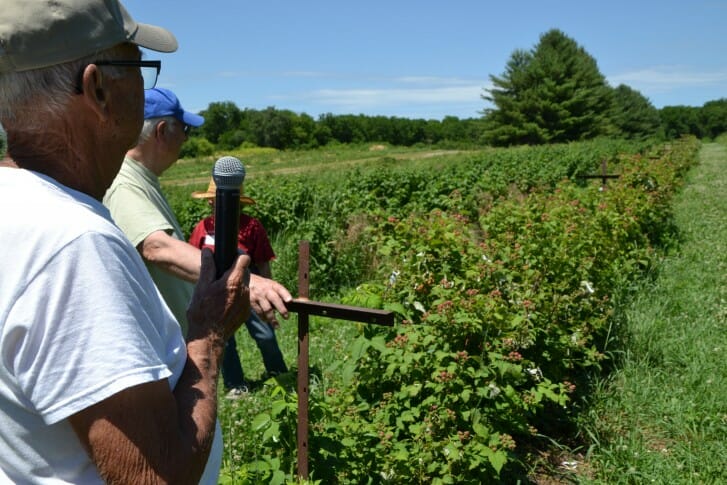 “We follow IPM (integrated pest management), which allows you to use conventional pesticides when necessary, but lean toward reduced risk constantly. We intend to continue that practice; we’ve never had a problem with consumer acceptance.”

“We have a mixture of varieties in each blueberry field. We do this so if we have to spray in one field, we can close picking in that field until the re-entry period expires. 35 years ago we started blueberries and it took us about 10 years to get it figured out.” Dean uses elemental sulfur to acidify the soil. Blueberries are a little delicate; that’s one of the reasons we were interested in honeyberries. Honeyberries grow easy and aren’t as picky about soil, with a similar flavor.” 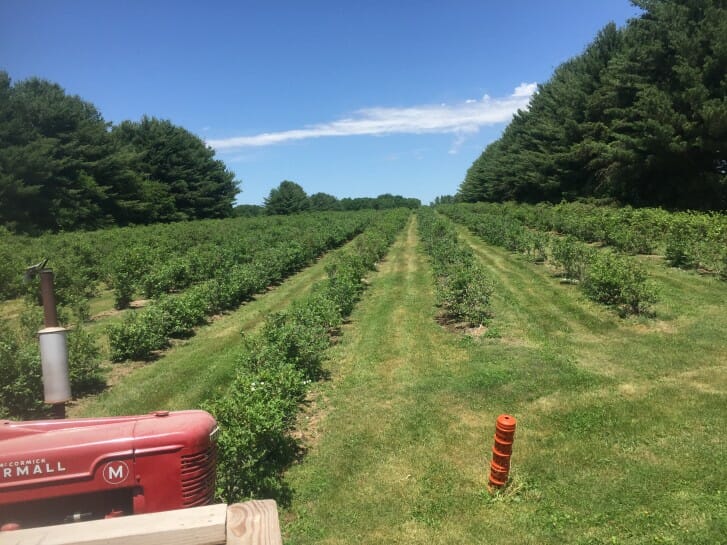 Jeff Sindelar, an attendee at the field day and owner of , jumped in to help discuss honeyberry. Says Jeff, “I have roughly 90, 4-year old plants. I like the Japanese varieties better than the European varieties better because of the size and the durability of the plant. This is the first year we are going to start thinning to continue with the best of the best. The plants are evolving so quickly, the plants I put in the ground aren’t the best around, anymore. They’re super simple to grow. They’re extremely winter hardy; I’ve had the rabbits mow off part of a row and they come back, just from the roots. Some of the varieties are very tart, some are very good. I heavily wood mulch them to keep the weeds down. There are several varieties that like to sucker, that makes them hard to harvest. The worst thing about the honeyberry is that you’ll have a 3-4 ft bush that won’t look like there’s any berries on it at all… then you open the bush up and they’re just loaded within; you don’t see a lot of the berries on the outside.”

“Harvest time is far ahead of strawberries, even my latest ones are done producing for the summer. Some of the new varieties are later. Honeyberry absolutely need to be netted – the birds love them.”

Some varieties get 2-ft tall, most are about 4-5 ft tall. According to Jeff, honeyberries are better tasting than blueberries. “I am replacing all my blueberries with honeyberries. The people out of Minnesota at Honeyberry USA are great – very down to earth – just like Dean.” (Dean intends to move these honeyberry bushes to a more ideal location out of the shade… a project in the making). 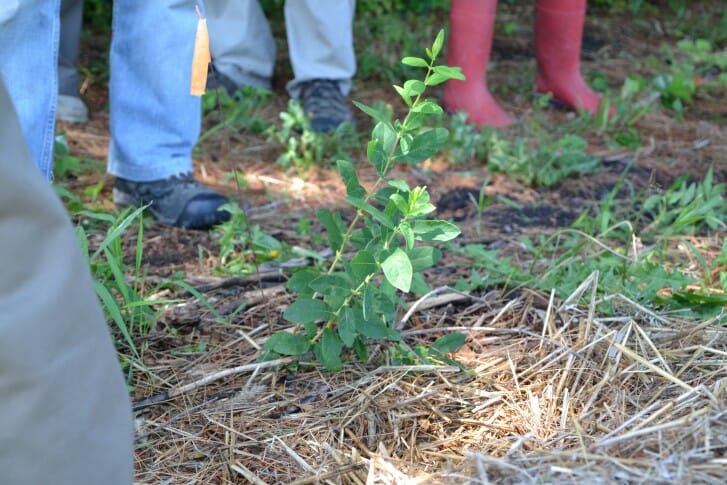 “We’ve tried strawberries in our high tunnel for a few years. It’s a nice hobby but it’s absolutely unprofitable. This year we had a particularly early crop that attracted some attention, but our costs were higher than you can imagine. I don’t think we’ll repeat that. I ignored all the research and did it anyway.” 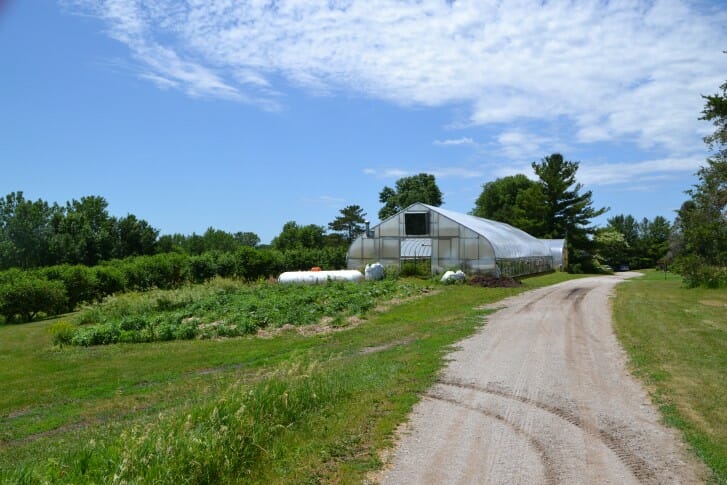 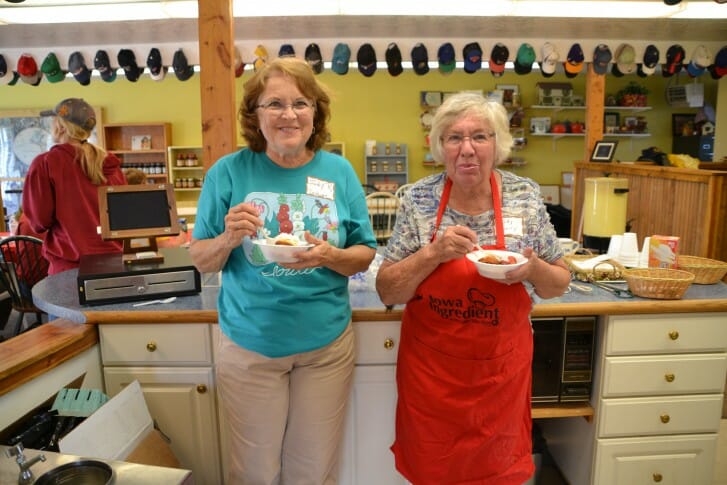 Attendees enjoyed lunch on the porch before heading out to tour the farm. 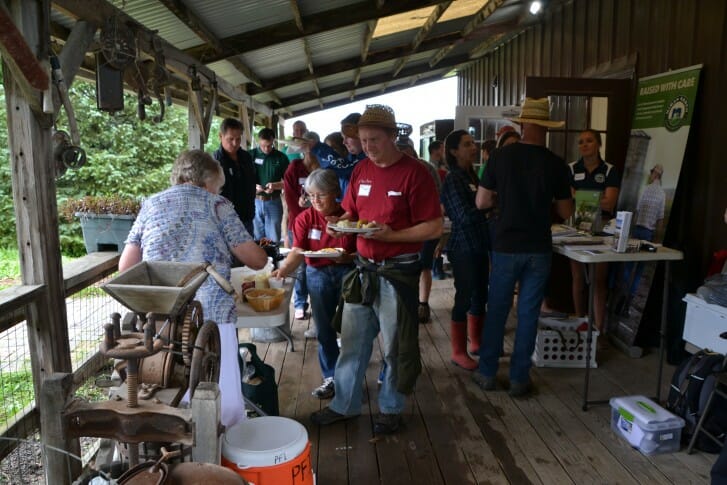 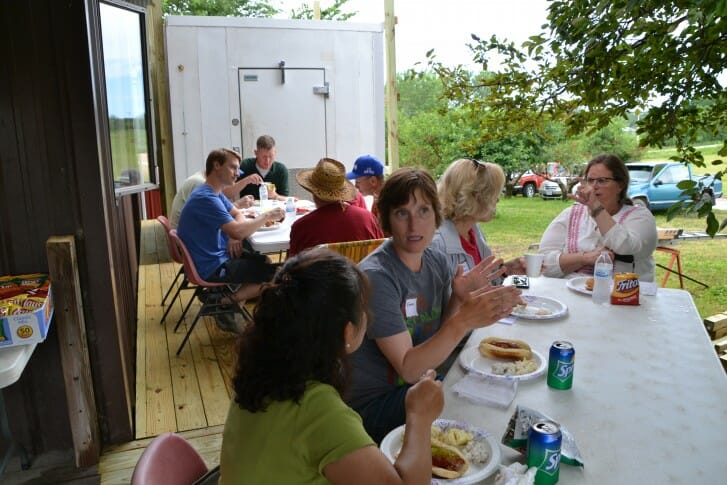 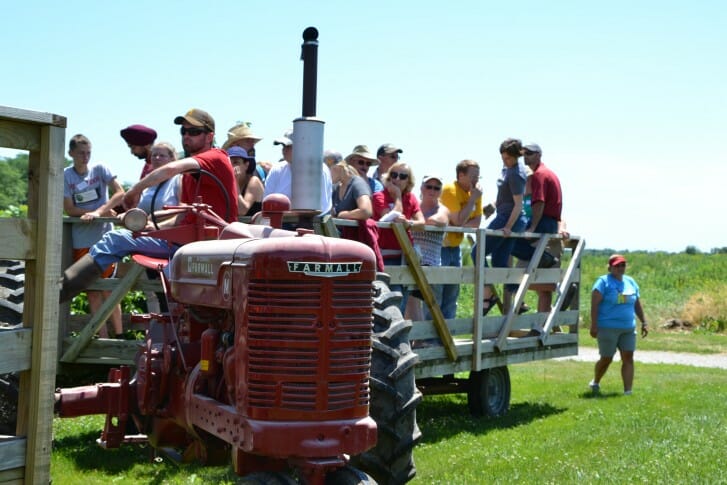