According to the 2014 Organic Survey, Iowa ranked No. 10 in organic sales, but the state has since fallen out of the top 10. Given that organic sales rose nationally by 13% from 2014 to 2015, though, interest in organic farming and produce remains strong among consumers. Interest also remains strong among farmers in Iowa. As such, Scott, Jack and Linda Ausborn hosted a field day near Ida Grove to address the organic transition process, crop rotation considerations and weed control tactics. “Farming organically is fun and challenging,” Scott told those attending. “It has also connected us to a very experienced network of farmers to learn from and go to for help.” The field day was held in partnership between Practical Farmers of Iowa and the Iowa Organic Association. 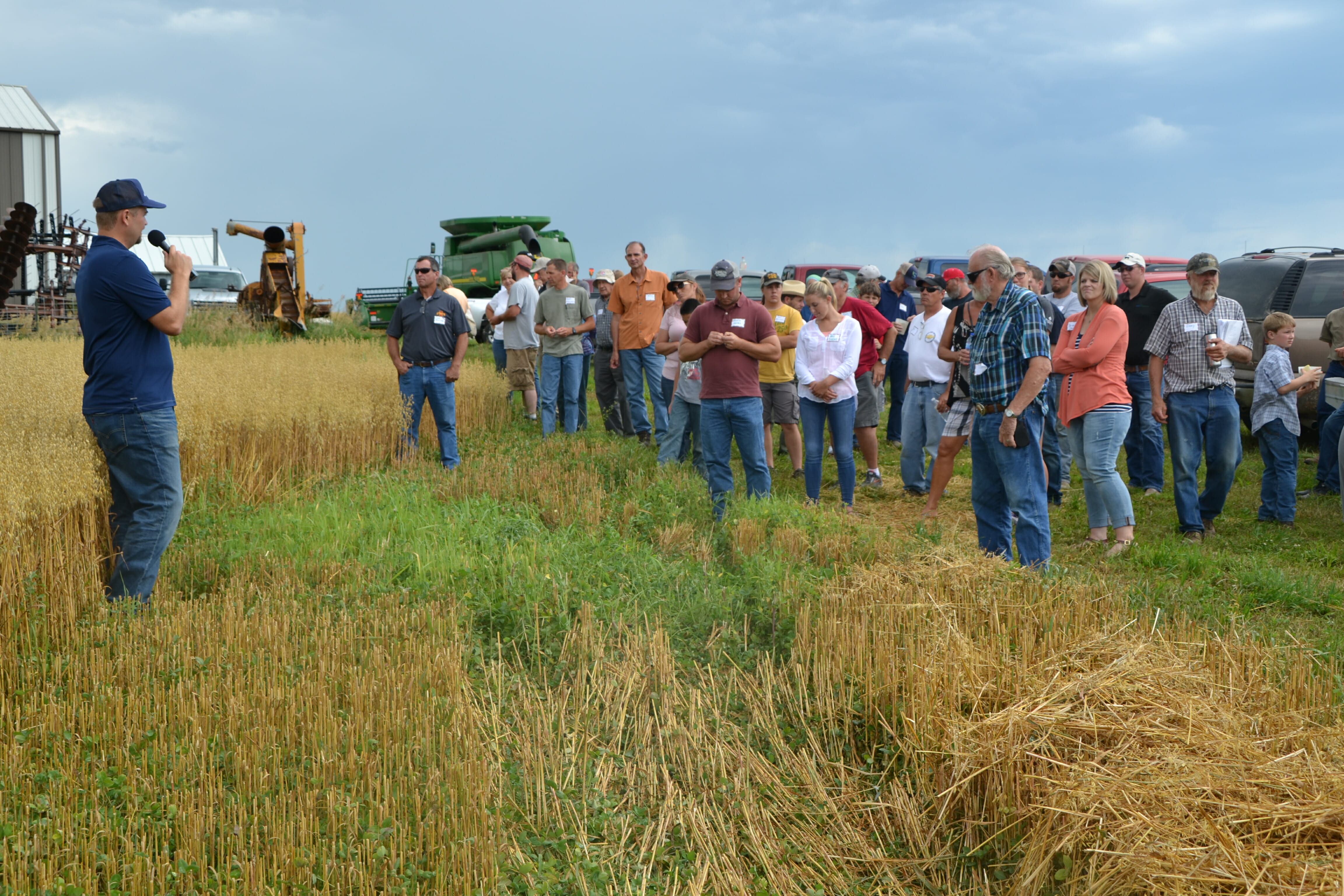 Echoing what most organic farmers will tell you, Scott encouraged those thinking about transitioning to organic to start slow. “Get your feet wet with a few acres or small fields first,” he said. Starting the transition process with “solid-seeded” crops like small grains and hay can alleviate some fertility and weed control concerns (small grains and hay are quite competitive with weeds and require relatively little added fertility). On their farm, the Ausborns chose some relatively flat and rectangular shaped fields to begin transitioning to organic in 2015. “Most of the rest of our farm includes fields with terraces, grassed water ways and farmed on contours that would make it difficult to cultivate for weeds,” Scott said. On that note, it’s also important to learn how to cultivate for weeds during the transition process because, as Scott says, that’s how you’re going to be controlling weeds for high value corn and soybean crops once you’re fully certified. The best way to avoid “cultivator blight” in corn and soybeans is to gain experience cultivating for weeds. As such, at least one of the fields being certified is planted to corn or soybean on the Ausborn farm each year in order to “practice” cultivating.

As to a question from the audience regarding what products can be applied to fields transitioning to or already certified as organic, Scott urged farmers to check with their certifying agency first as a general precaution before applying anything that might give them pause.

To learn more about the Ausborn’s organic transition process and the crop rotations they’re using, check out Scott’s presentation slides he presented to attendees.

Oats in the Rotation

One of the principal elements of organic farming is crop rotation. While most Iowa farmers are well-acquainted with corn and soybeans, small grains (like oats) and forage legumes (like alfalfa and red clover) are less familiar and typically only found in diverse, extended crop rotation systems on organic farms in the state anymore. On the Ausborn farm, they’ve chosen to include oats in their crop rotation. “There are a lot of long-term benefits to including small grains. It’s nice to see something growing in Iowa in April,” Scott said of their oats, which are usually planted in late March. Getting roots into the ground as early in the growing season as possible can help prevent soil and nutrient loss as well as out-compete summer annual weeds. Another benefit of a small grain in the crop rotation is the opportunity to include an underseeded green manure crop like alfalfa or red clover. Scott told the attendees they had heard pros and cons of either green manure from the different experienced farmers they go to for help. Some suggested alfalfa because it worked up better the following spring than red clover (which some claim can leave the soil a bit too clumpy). Meanwhile, others championed red clover because it will typically provide more nitrogen to the following crop (in this case corn) than alfalfa. Unable to decide, the Ausborns tried both–in one field they underseeded alfalfa with their oats; in another they used red clover. 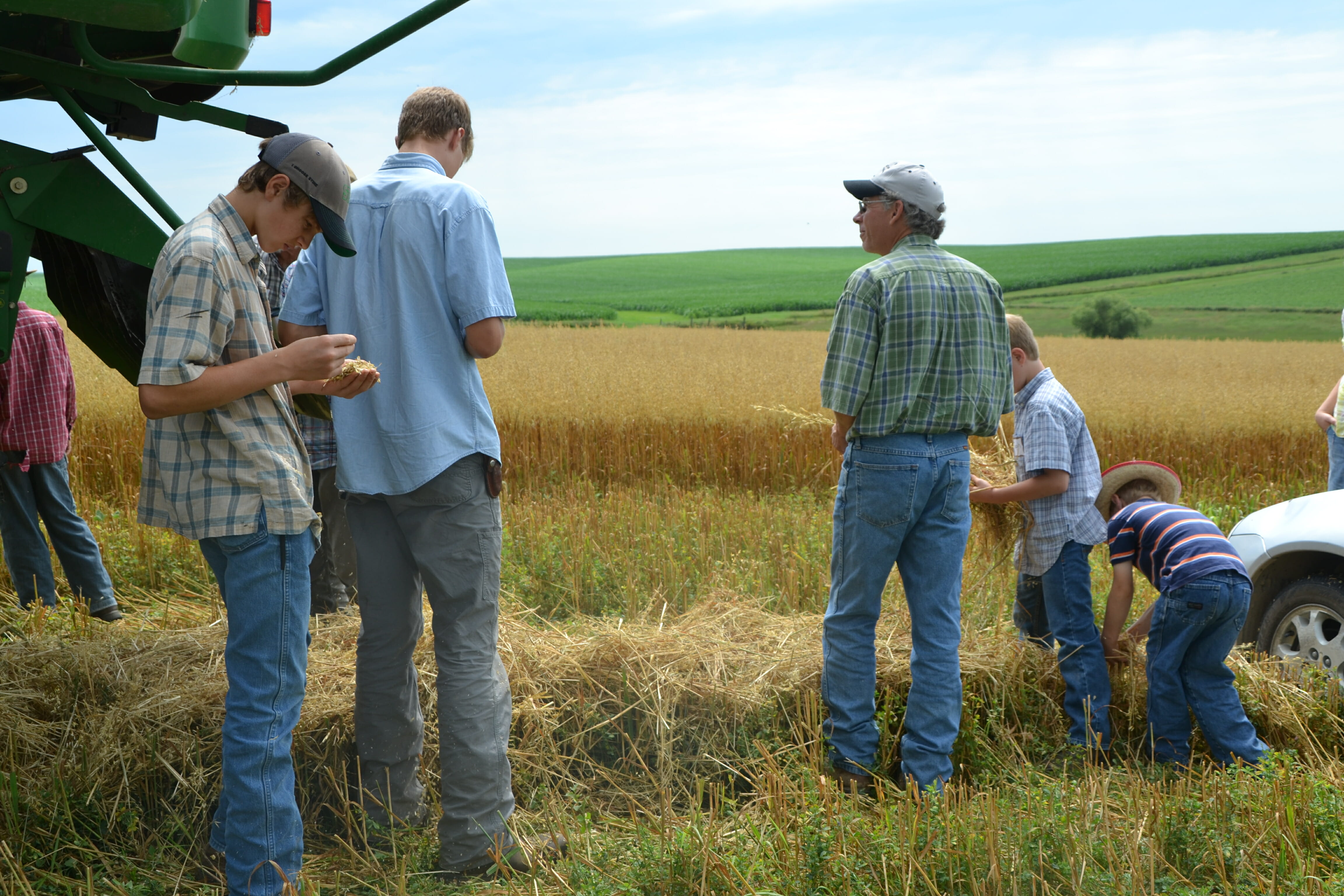 Attendees inspect the alfalfa underseeding from a harvested swath of oats. 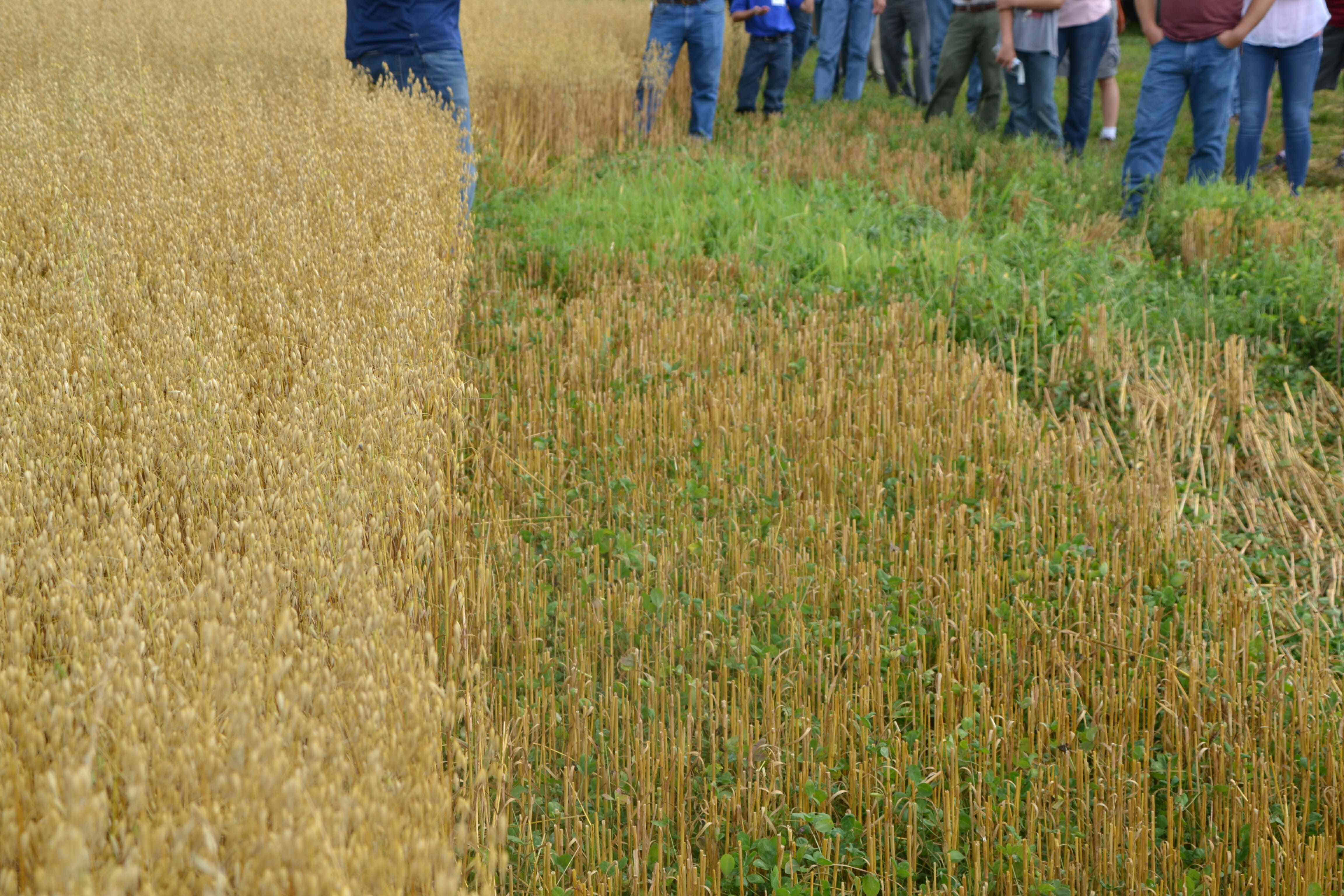 When planting oats, variety selection should be considered carefully. “We chose a shorter stature, earlier maturing oat variety,” Scott said about the variety ‘Shelby 427.’ A shorter oat crop interferes less with the green manure underseeding–it allows more sunlight to penetrate the oat canopy for the low-growing legume to establish. But this will reduce straw yield come harvest. “While we do harvest straw for small square bales and make some money from that, the nitrogen provided from the alfalfa or red clover is more important to our system,” Scott said. They chose an early maturing oat variety in an attempt to avoid much of the Iowa mid-summer heat. Too high of a temperature during pollination and grain fill can reduce oat grain yield and test weight, respectively.

The discussion on oats eventually turned to harvest method. To direct harvest or swath and pick up? Scott mentioned that they harvest oats by direct cutting–they already have a combine that can accomplish this. Setting your combine’s fan speed to blow “light oats” out the back of the combine while harvesting is a good idea. “This might reduce your total yield, but if you’re trying to make milling quality, this a strategy than can improve your test weight and bring you a better price when you go to sell.”

“We’d like to try swathing, but swathers are difficult to come by,” Scott said. “And so are pick up heads for combines.” New Practical Farmers member James Asmus, who has a lot of experience growing oats, chimed in to encourage the swathing method. “With swathing, you lay the cut crop, as well as any weeds, on top of the stubble to dry,” he said. “This allows the weeds (now wilted) to feed through the combine much better than when direct cutting.” 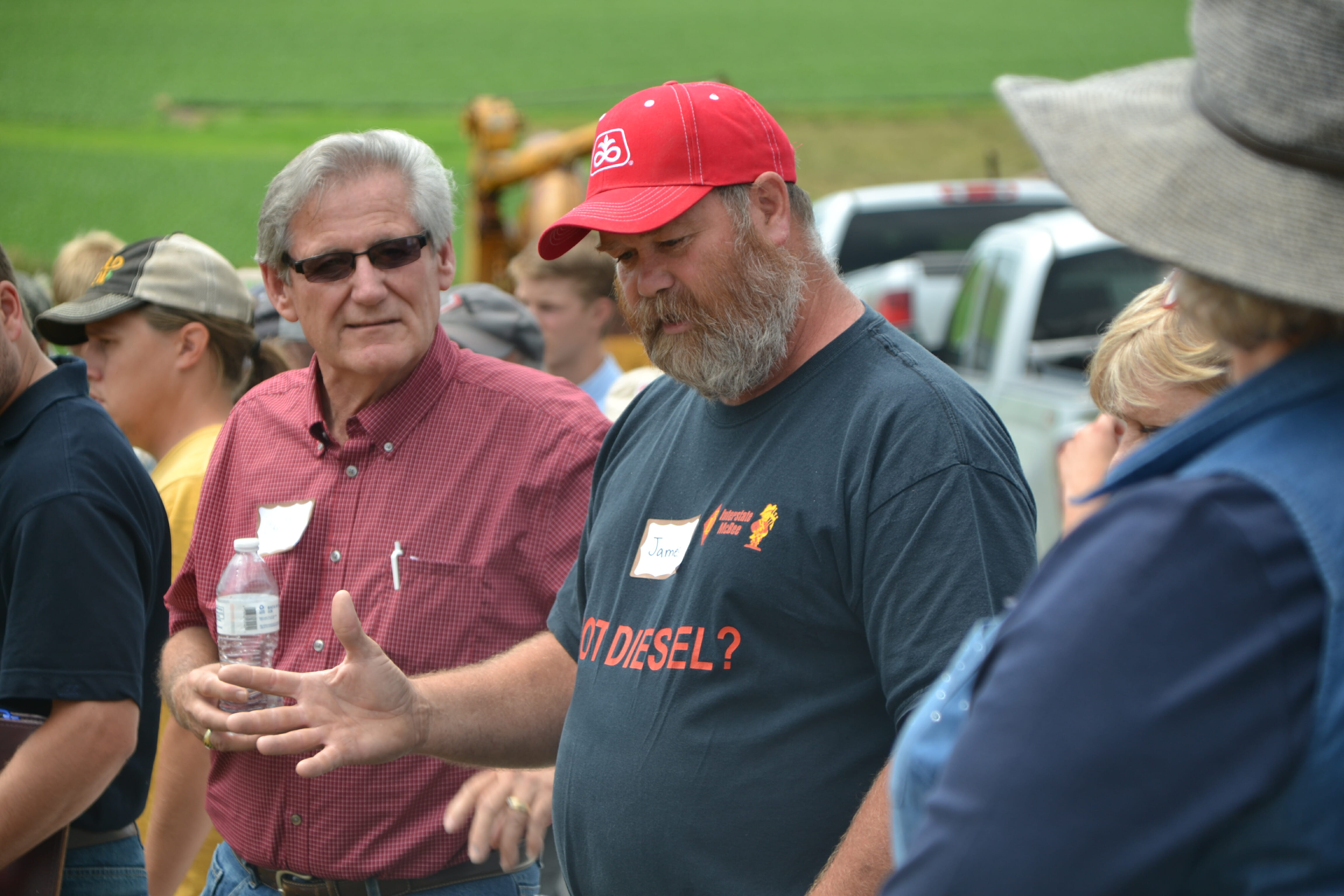 New PFI member James Asmus, who farms near Manilla, added to the discussion on growing oats.

“Make sure you have the right equipment and stay on guard all spring and early summer,” organic farmer Seth Smith told the audience. He was referring to the importance of keeping fields as weed-free as possible before the corn or soybeans close up the canopy and can better compete with weeds themselves. “Even if things are looking good, you need to keep things looking good,” Seth said. One of the major reasons Seth farms organically is that it has reduced his input costs and increased his financial returns compared to farming conventionally. 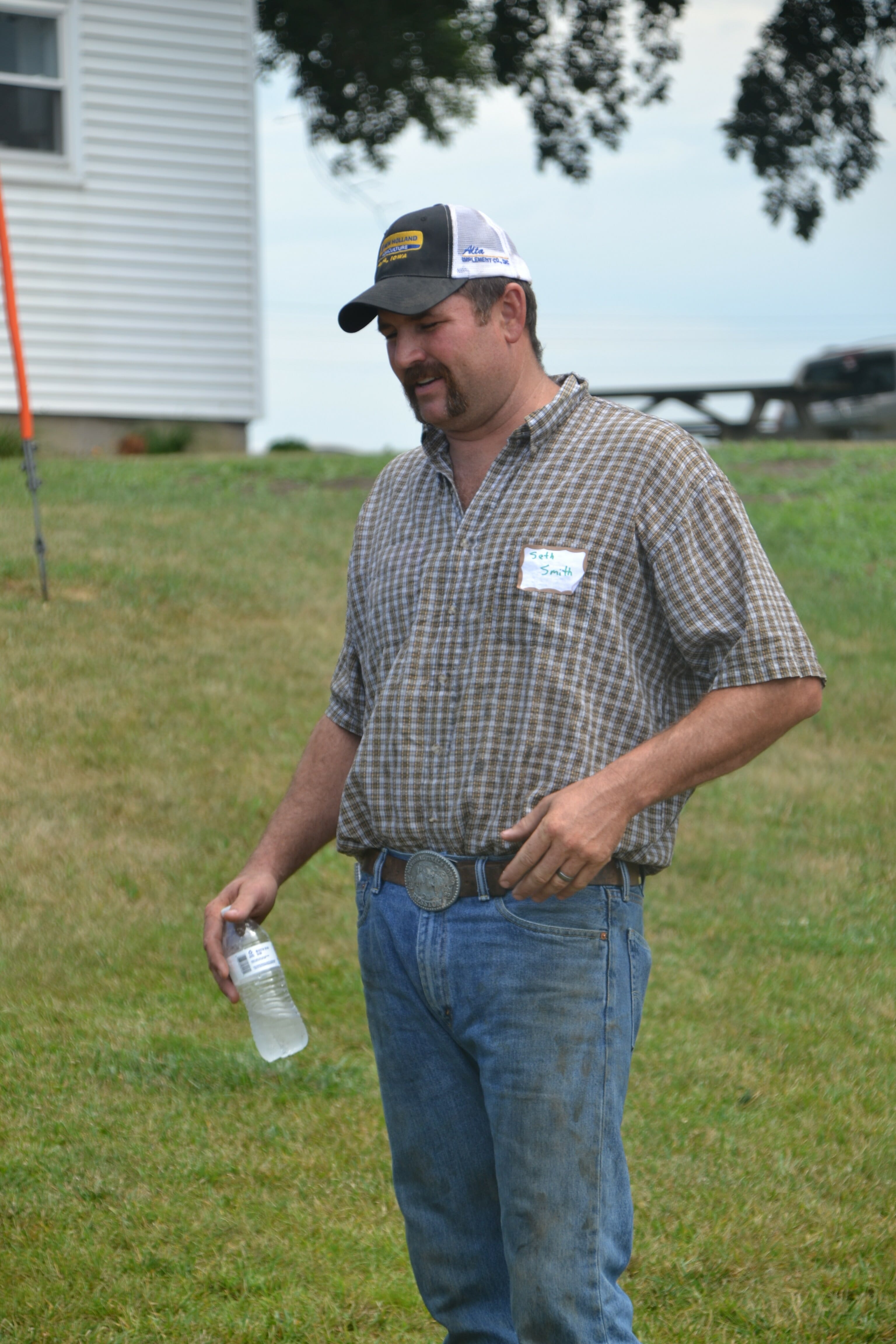 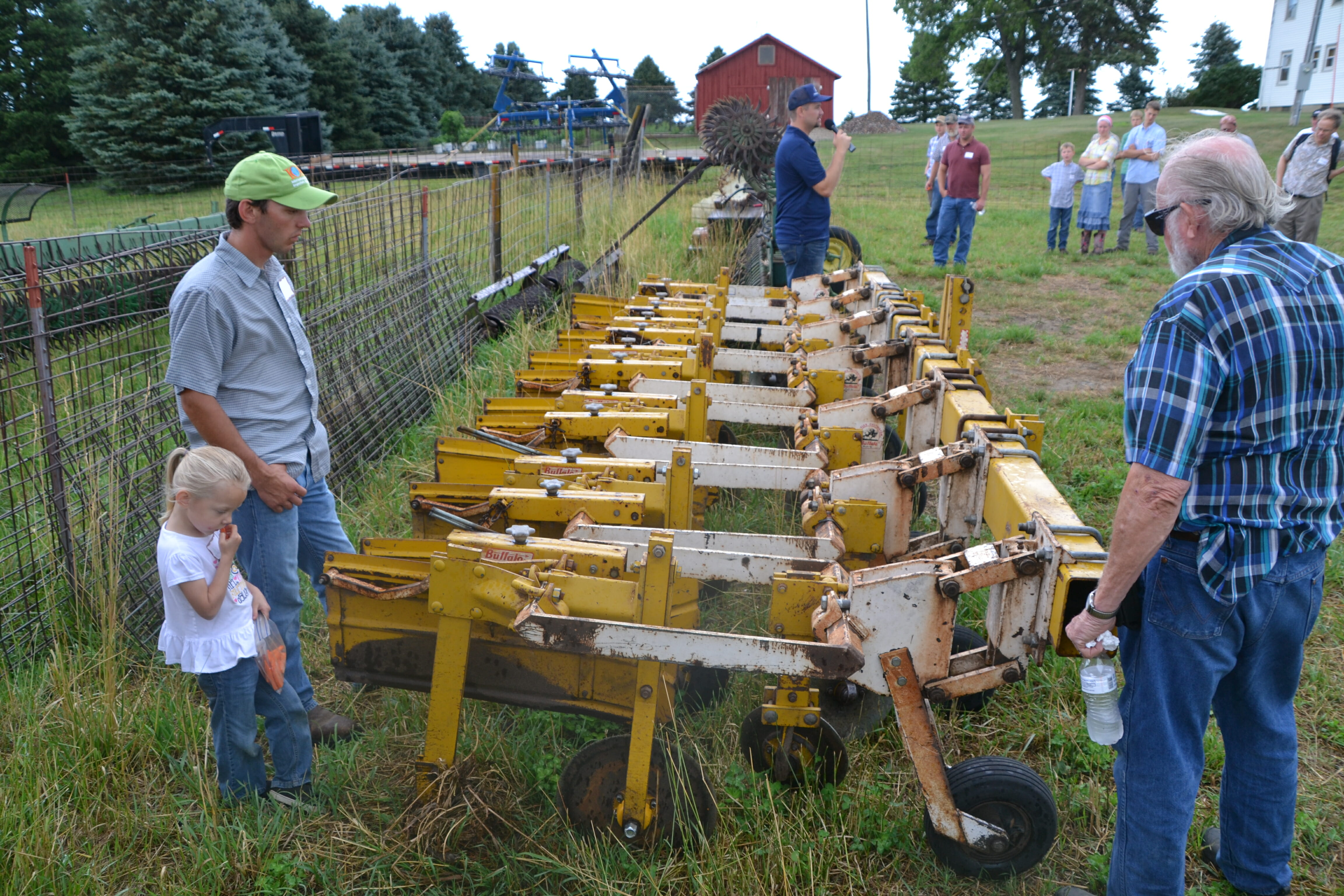 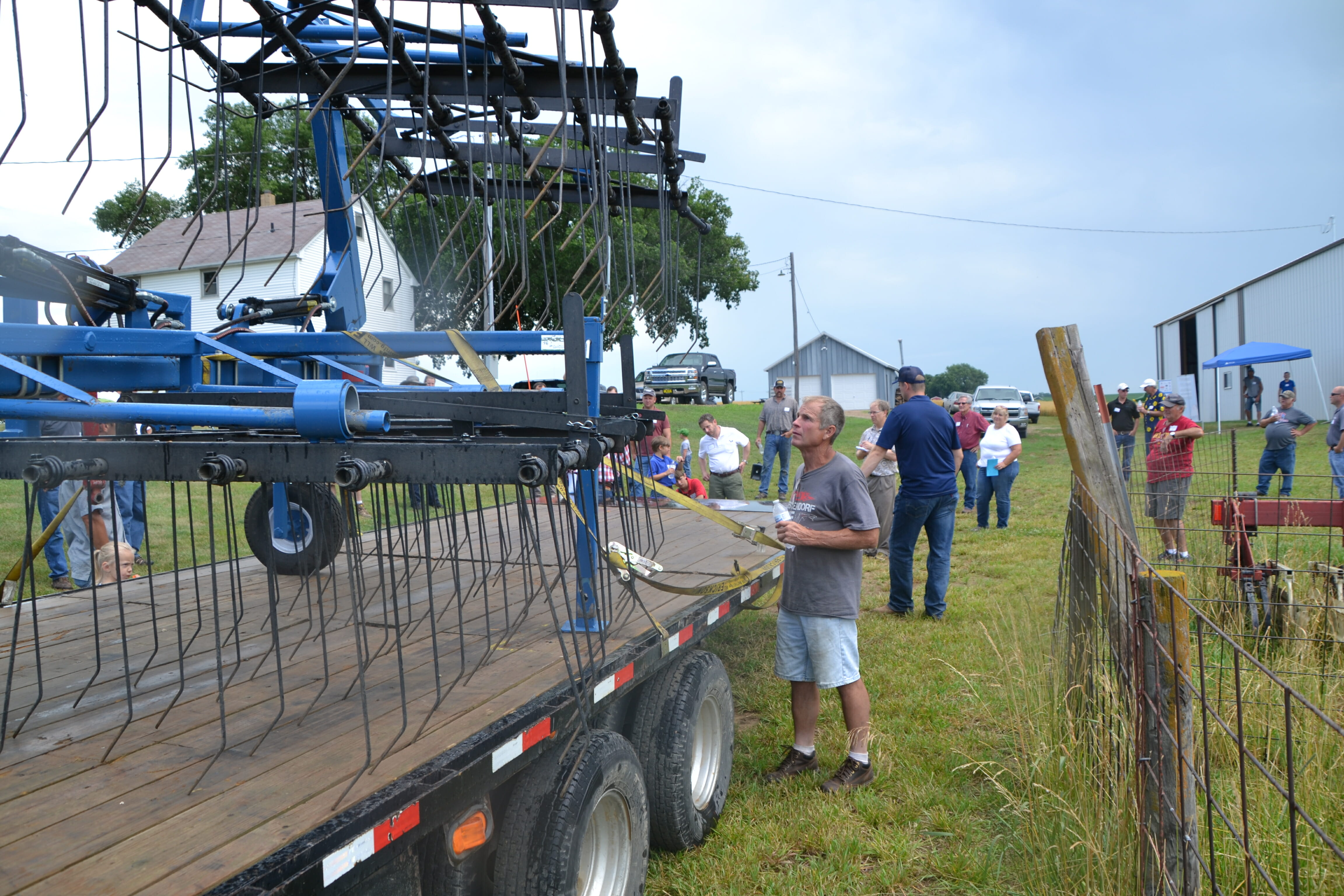 Scott also invited long-time PFI member and organic farmer Paul Mugge to speak about weed control as well. For organic soybeans, Paul plants 190,000 seeds per acre because he knows he’ll probably destroy some plants while cultivating. When asked what piece of equipment he’d use for his first pass with a cultivator after planting, Paul had this to say: “If it’s been wet and there’s a crust on the soil, I’ll use a rotary hoe for that first pass. But if it’s been dry, I’d use a tine weeder.” Ever humble and in true Practical Farmers spirit, Paul prefaced all his remarks by saying: “Don’t go home thinking this is the way to do things just because this is how I do things.” 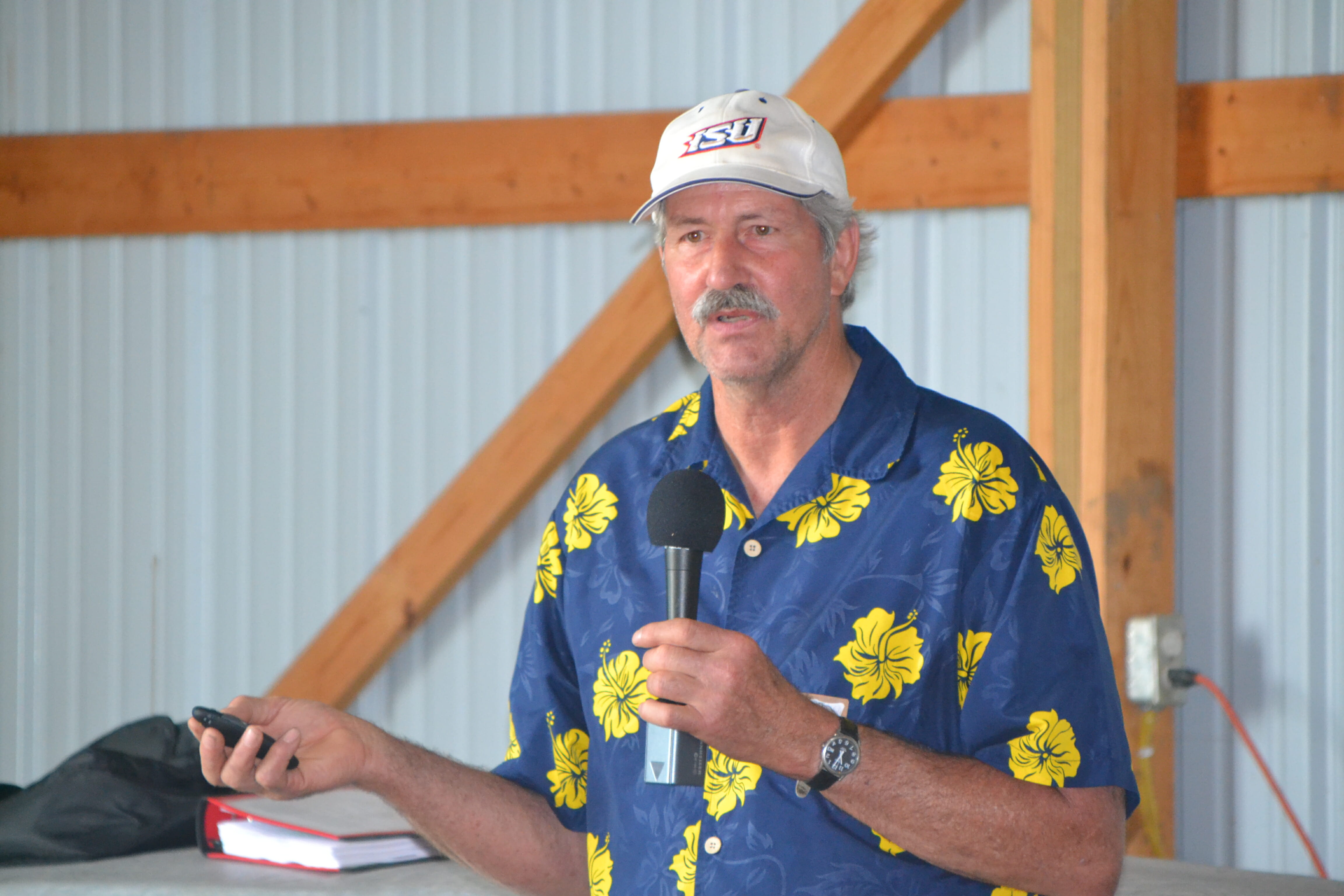 Thank you to Scott, Jack and Linda Ausborn for hosting over 60 people on their farm!