Tom and Irene Frantzen first hosted a field day 30 years ago. Irene said, “The reason we did that initial tour was because we were interested farmers that wanted some questions answered. What better way than through PFI?” Frantzens hosted 20 consecutive field days, skipped a year and hosted a tour in 2009, and then took an eight year hiatus until this summer’s event June 29—over 100 people attended. 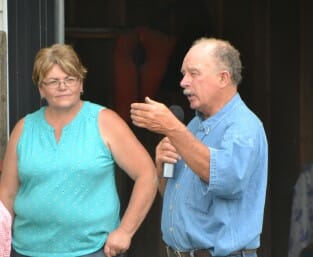 Irene said, with heartfelt emotion, “We were one of the earlier members. Without the vision Dick Thompson and Larry Kallem had, I don’t know where any of us would be without PFI. I hope all or most of you are PFI members. If we didn’t have a connection with all of you people, I don’t know where we’d be today.”

Tom said, “There are three keys to leadership that Practical Farmers gets,” and defined these characteristics:

Frantzen Farm’s goal: “We desire a profitable family farm with good health, a pleasant surrounding, biological diversity and both economic and ecologic stability.”

Tom shared, “Our 320-acre certified organic farm has 255 acres of crop land, 15 acres of permanent pasture and 30 acres of CRP. We have 60 beef cows and 40 brood sows. Each year we pay a good amount of income tax. We provide 100 hours of labor per week 12 months of the year. We have a salaried herdsperson. We buy our services from our local community.” 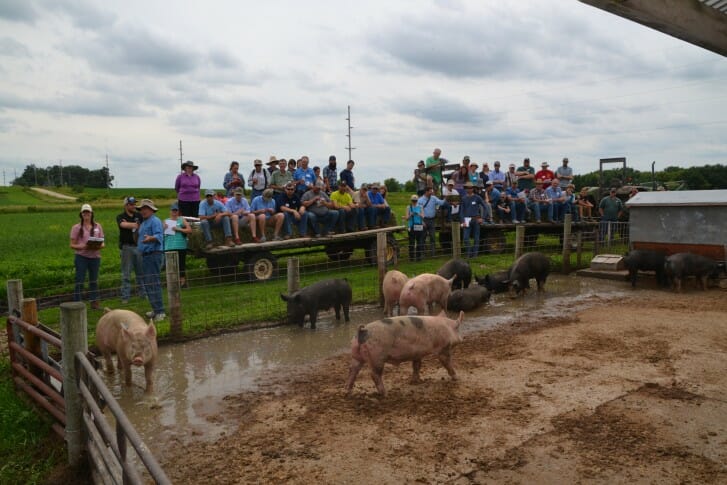 Attendees crowded onto two trailers to ride to a rented hog facility nearby. In 2013, the Frantzens started a series of pork research activities in partnership with Practical Farmers, Iowa State Extension, Organic Valley, and the Osage Vet Service. The pork facility is broken into halves, with similar setup. Research on the farm has included a group of pigs split as evenly as possible.

At the PFI annual meeting, the Frantzens heard from Steve Deibele about niche markets for high omega-3 pork. Steve feeds his pigs barley, oats and soy protein and premix. The Frantzens wanted data on performance of these diets.

Currently, they are comparing feeding small grains in pelleted versus mashed form. They are measuring average daily gain and intake. 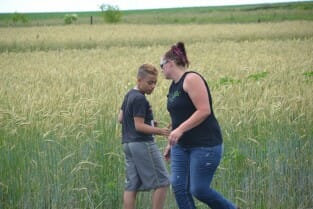 Tom said, “Amanda (herdsperson) and Meghan (Filbert, PFI livestock coordinator), had the great idea to purchase a scale for the project.” Individual pig weights are taken every two weeks. Amanda said, “Data automatically is loaded into a spreadsheet, and I have all the data I need.” The scale cost about $1,300.

So far, results are promising. Feed ration consists of 60% barley 20% oats 15% protein, and a 5% Futrell premix. Corn was removed from the diet when the hogs reached 65 pounds, and the transition was smooth. The Osage vet has been out to visit multiple times, and the pigs have been in good health each time. 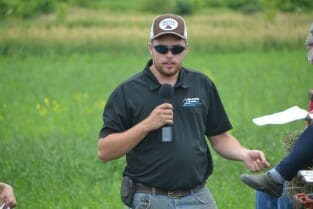 To prepare the feed, son, James, who owns and operates Riverside Feeds, makes up mashed food for both sides. Half is fed as-is, and the other half gets pelleted, by adding feed-grade clay and steam and processing it into a high temperature pellet. James warned, of processing the feed: “Don’t try this at home. A common on-farm feed mill won’t process mashed feed fine enough for maximum efficiency to feed hogs out.” James has a commercial hammer mill with small screens, and uses a special process to get it fine enough. “We are able to get it ground to to 1,200 microns. Ideally it would be 700 or 750 microns.”

In a previous project, 15 pigs received Ivermectin shots, the other 15 did not receive Ivermectin. Tom said, “Ivermectin breaks a parasite cycle in mom’s life. The hypothesis was: if successful, her offspring could go to slaughter without problems. But there was no data available.” In three replications, there was zero difference between treatment and control. Tom said, “We collected evidence that shows breaking the parasite cycle at the mom’s level will produce healthy offspring.” Tom warned that segregation from older pigs is extremely important to maintain healthy, untreated offspring.

The research report for this trial can be found here.

Tom said, “If you look on the internet there’s 3,000 claims about the benefits of apple cider vinegar, but there’s no numbers. PFI is all about numbers.”  In this previous trial, half of the hogs were fed five gallons of vinegar per ton and compared to a control. This trial was replicated three times. Each time vinegar increased intake, gain and feed efficiency. Tom said, “Vinegar helps an animal get more energy out of its feedstuff by aiding the digestive process. Vinegar just makes sense, and the data we generated backed that up.” Frantzens realized a 2:1 return on their investment in vinegar.

The research report for this trial can be found here.

Tom said, “After the vinegar trial, we asked: what would happen to small-scale niche producers if they didn’t grind their feed and fed no corn? This is a radical one.” In this trial, 10 pigs were fed a normal corn soy organic diet. The other 10 pigs, after 65 pounds, were only fed whole raw grains and hand-fed protein, with no corn in the diet. Tom said, “I really felt sorry for them. Initially, I thought they’d die.” Tom was surprised by the results: “They didn’t do as well, but they still gained reasonably well.”

“The reason we did this is that the niche pork world has very small-scale producers that don’t have a mixing mill or equipment.”

Results of this trial can be found here. 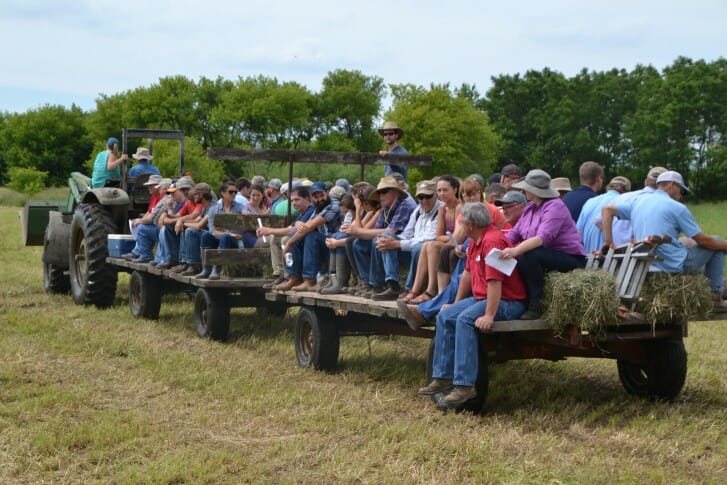 Next the trailers traveled to look at Frantzen’s hybrid rye.

Tom said, “Like all farmers, we face problems with weeds. Perennials used to be the biggest battle we had. I finally realized, what my dad had been telling me for years was right: I had the wrong equipment for perennials.” The Frantzens bought an International Harvester field cultivator for$250. They took the sweeps off. “Cultivate perennials with just a field cultivator, nothing more than a dull point. It goes through the ground, hooks but doesn’t shear the roots, and drags them up to the surface. We like to do this on windy, sunny days. Effectiveness I’m convinced is 100%”

Next, Tom talked about annuals: “If you put all annual weeds I’ve fought on one side of the balance beam, and put the big monster, giant ragweed, on the other side, ragweed would exceed all the other weeds.” 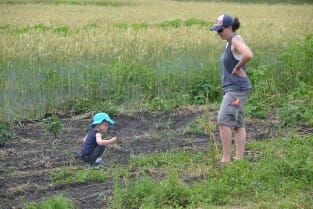 After talking with Professor Matt Liebman, Sarah Carlson and others about the problem, Sarah sourced some hybrid rye for Tom. “Sarah told me that it wasn’t a cover crop, but a grain crop.” Tom planted this rye into 20 acres on land infested with ragweed. The rye was bred to be shorter so it doesn’t lodge. Yields increased, and ergot was nearly bred out. At the field day, the rye was uniform and near maturity. Windrowing, combining, and baling the rye for bedding and hog feed would soon follow. There was some ragweed in the field, but at a much lower population. Tom said, “The ragweed hasn’t gone to seed, so we will reduce the population when we harvest the rye.”

Tom is excited about the prospect a fall-planted annual can bring to his rotation. It will help weed control, and it will also keep his ground covered. This is important since Tom says, “Climate change is bringing recurrent weather extremes, and farmers need to have more tools to respond to it.” 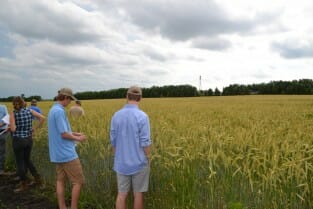 Attendees check out the hybrid rye

His proposed new rotation will provide 75% ground cover over a six-year rotation:

Tom is excited about another potential rotation:

In this rotation he’d seed the rye into leaf-yellow soybeans. Tom said, “Sarah Carlson is cautioning me about being over-enthused. We don’t know how it will work. But if it does, we’ll achieve 85% ground cover over 60 months.”

Tom is also excited about the wildlife habit potential, as he iterates in this video:

The final look of the field day was a three-year-old plot of Kernza. The Frantzens planted this at friend Professor Laura Jackson’s request. Why was she encouraging Kernza? A perennial wheatgrass, Kernza puts down deep roots. Living roots in the ground year-round provide home for many other carbon-storing organisms, from bacteria to insects to worms, helping build healthy soil. Perennial cover and healthy soil result in reduced erosion, improved water retention, and reduced nutrient loss.

Performance of Frantzen’s one acre of Kernza, planted fall 2017, to date:

Laura, who was in attendance at the field day, said, “There is a small market for Kernza. Patagonia is making beer, called Long Root Ale, with it. You can apply to be a supplier for retail use.” Laura reported that Kernza is still in development, and that researchers are getting good increases in seed yield and size.

Tom talked about results leading to goals throughout the field day. The current level of change happening on the farm is significant, and all changes can be linked to the farm’s greater goals. Tom and Irene prioritize farm transfer so much, they have written a generational transfer goal: Long-term protection of a true Iowa family farm that has significant conservation features blended into a working landscape. Tom regularly uses as a compass: “How do our activities influence who is going to follow us?”