Let’s start with the last thing first – everyone who attended the field day got to make and take home a mushroom production block. Field day host Tyson Allchin is so energized to get others growing mushrooms that he donated all the blocks, not blinking when 70+ people showed up. Mushroom production – especially indoor production – happens in relatively small spaces. The large group patiently took turns looking at the grow room, the batch mixer where Tyson prepares his substrate, and the inoculation room where they prepared their blocks in groups of 12.

Indoor oyster mushrooms are extremely productive. The biological efficiency (lb produced per lb of dry substrate) is typically at least 100%. Oyster mushrooms retail for ~$7-13/lb, depending on the market. For the low input cost of the substrate, growers can make an excellent profit. If you missed the field day, check out the photos below, listen to Tyson Allchin on PFI’s On-Farm podcast, and if you want to grow mushrooms, get in touch with Tyson. He affordably sells inoculated blocks, making it easy for growers to add mushroom production to their other enterprises.

Darrell Duncan, below, took home a block of Lion’s Mane. 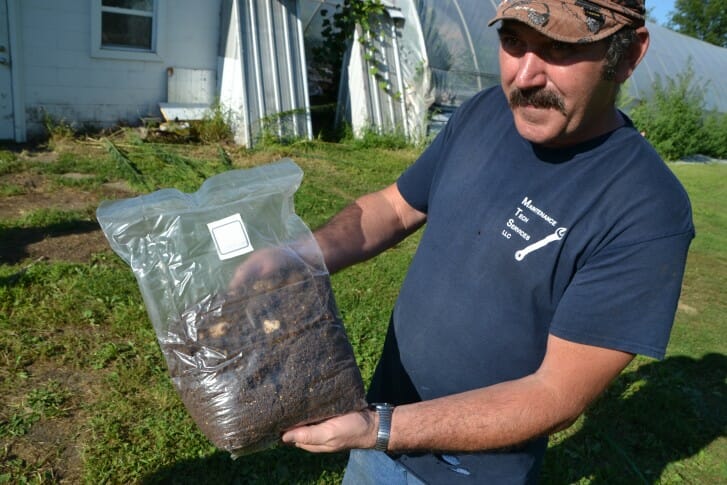 Tyson first demonstrated outdoor production with wood chips in a trench. He used a small tiller to make a trench about 3-4 inches deep. He filled the trench with soaked hardwood chips. In the photo below you can see the tiller, and the wood chips soaking in the wagon behind the four-wheeler. 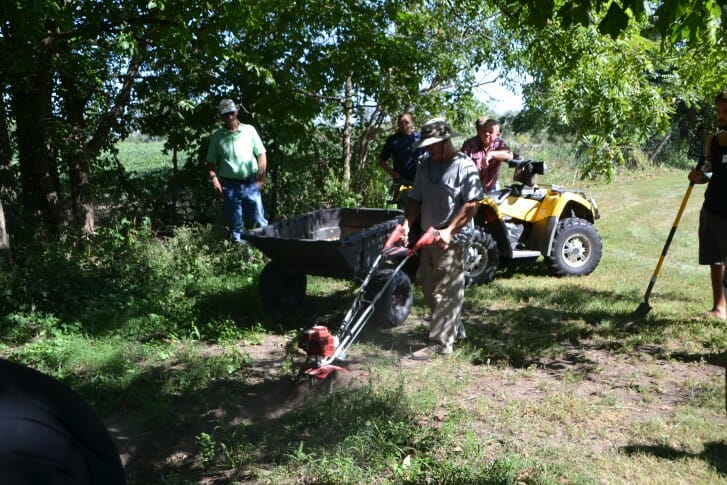 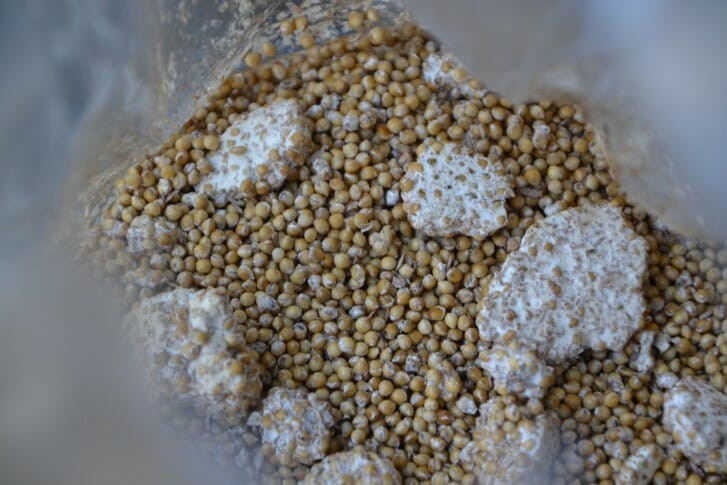 He filled the trench with wood chips, then sprinkled the spawn (inoculated grain) over the wood chips. He put down what I would call “quite a bit,” as shown in the photos below. We then just pushed some soil back on top of the pile; it’s not necessary but does helps keep a little moisture in. Outdoor production like this is nice for hobbyists, but not reliable enough for a business. If kept moist, the pioppino bed we made should (but might not) fruit in the fall (the field day was early August); indoor blocks would fruit in a few weeks. 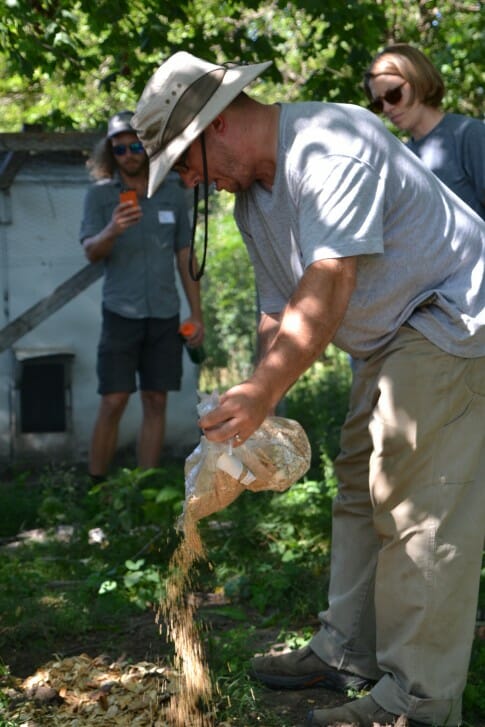 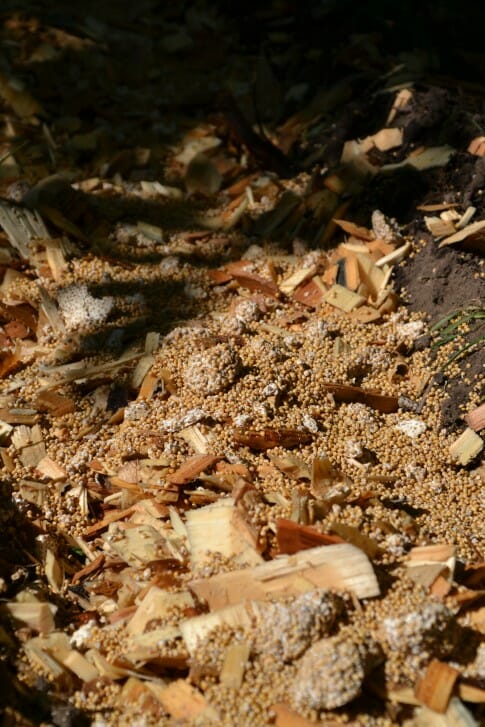 After the outdoor demonstration, the group began to move through the inside components of Tyson’s mushroom production. Tyson’s mushroom grow room is changing locations – moving from the protected room in the photos below into a sealed shipping container that will provide a more protected and stable environment. Because of the timing with the transition, there were no mushrooms growing in the grow room, but he set out plenty of photos for people of what it usually looks like. He kept the old grow room up to show attendees what he started with and what he would do differently. The old grow room was built inside a high tunnel. 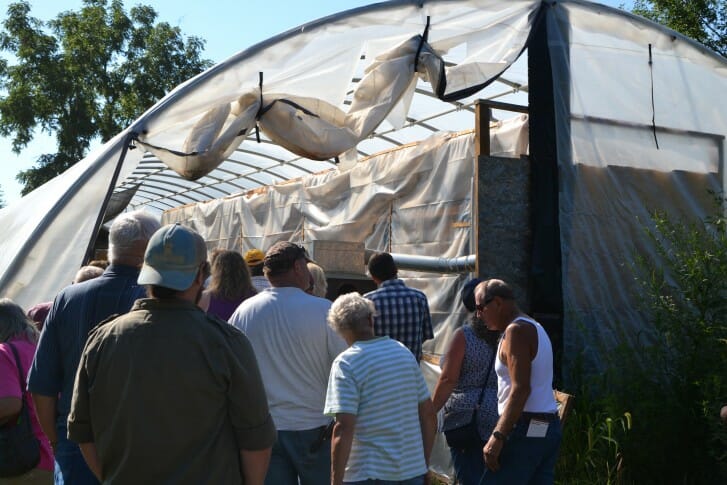 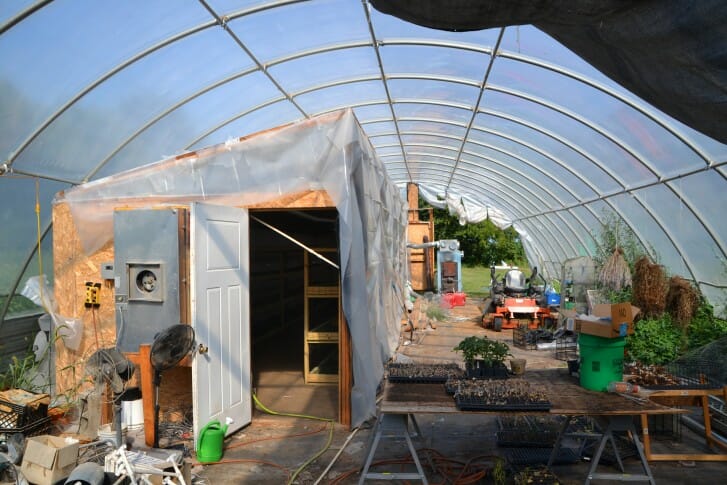 Shelves and heater in the old mushroom grow room. 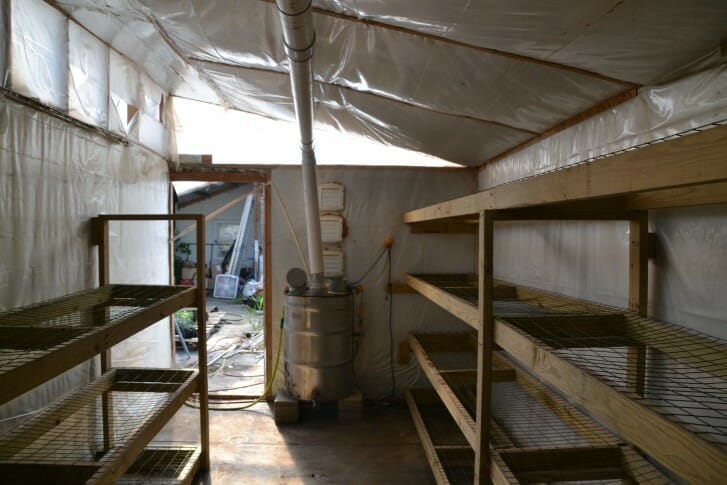 Attendees look at photos of mushroom production in Tyson’s old grow room, including several varieties, like pink oyster, that most people aren’t familiar with. 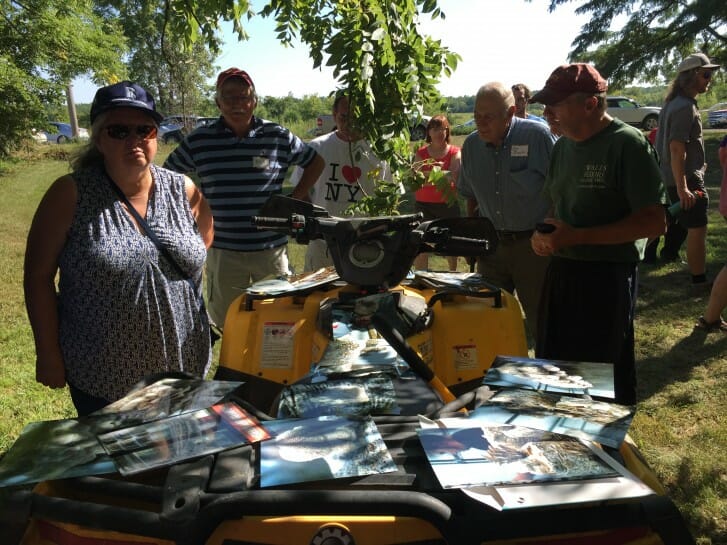 Tyson uses a half-yard batch mixer from Pack Mfg. to mix his substrate for growing mushrooms indoors. The mixer has a ribbon blender and delivers a homogenized substrate of sawdust, soybean hulls, and vermiculite. 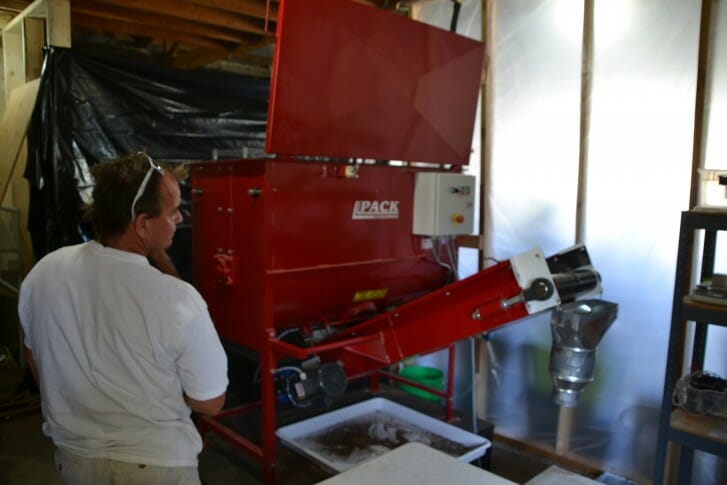 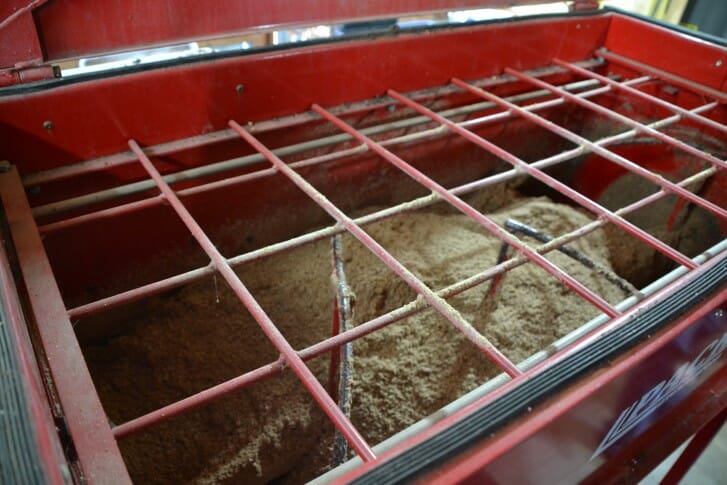 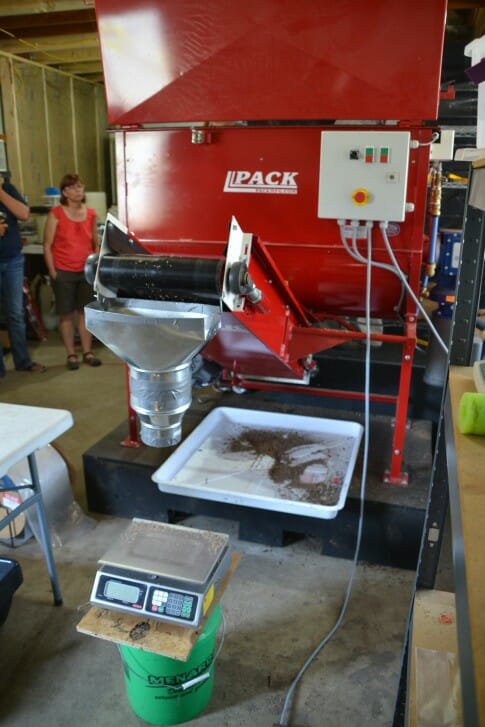 Another step that requires some patience is pasteurizing the substrate. “There are billions of spores floating around in the air at all times, and bacteria. You just don’t know what’s there. You want to knock down those competitors that will want to use your substrate as a food source.”

According to Tyson, most commercial growers sterilize their substrate, not just pasteurize. The difference: pasteurization is above 160 F for a long period of time. Sterilization requires 25 PSI – pressure and heat destroy the cell walls and denature any contaminate spores that might be present. “What I do is called super-pasteurization. I start with hardwood fuel pellets – in the making of the pellet, the pressure, heat and grinding are one heat treatment. In my mixer, I hit the pellet with 160 F water to release it back into sawdust – that’s a second heat-treatment. Once I mix in my soybean hulls and bag the mixture, I steam the bags for at least 12 hours, which is the third heat-treatment.” 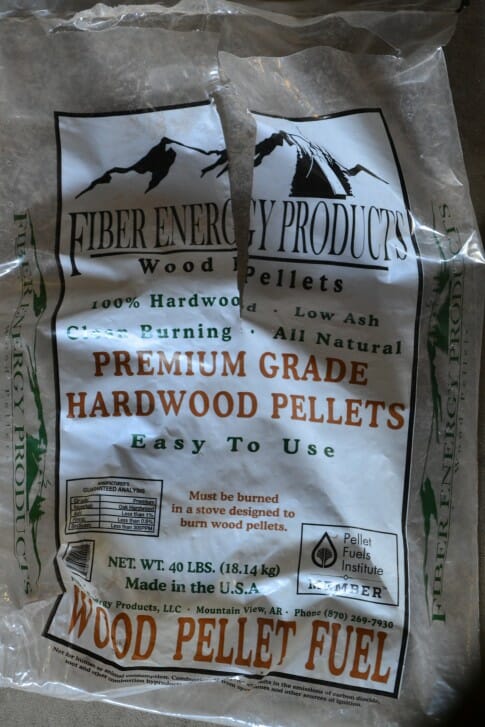 Below are a couple of Tyson’s vessels for the third step of super-pasteurization. A 55-gal drum over a turkey fryer, and a few large pressure canners. He also has a horse trough that he converted into a steamer, heating it with a sauna steamer. 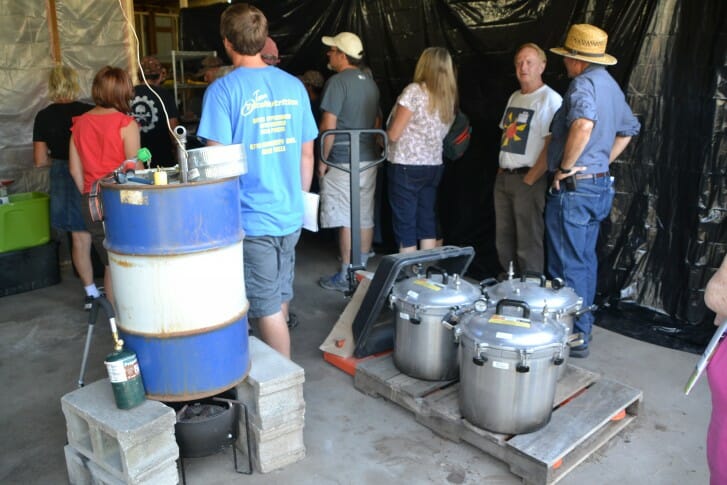 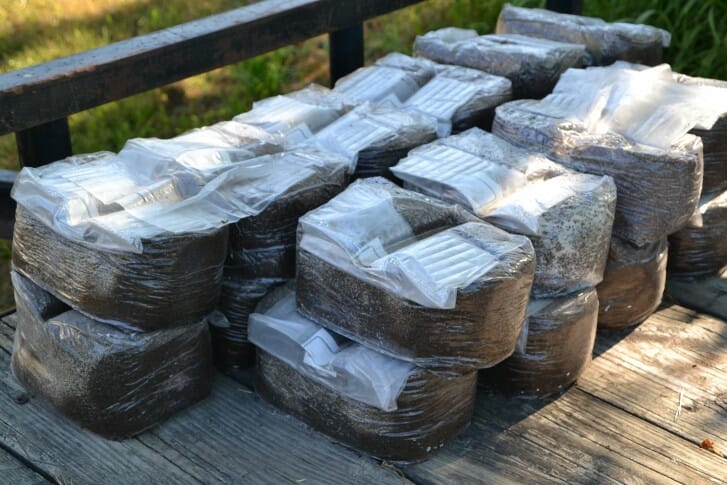 While attendees were taking turns sealing their mushroom blocks, part of the group toured the Chin community garden Tyson hosts on his farm. PFI member Morgan Hoenig of Eat Fresh Southeast Iowa provided an introduction to the gardens and a few of the less common crops. The field day concluded with a snack of oyster mushrooms and steak. 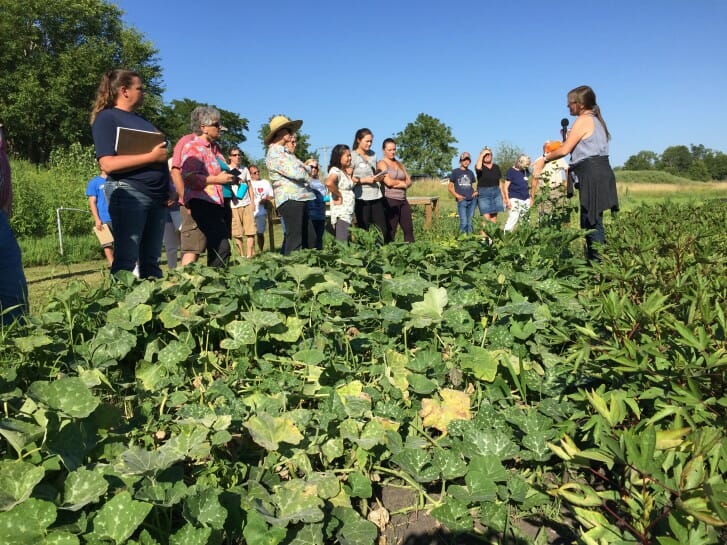 Thank you to Tyson, Morgan, and the 70+ people who attended the field day!