Throughout Practical Farmers’ 2017 field day season, we are spotlighting many of the PFI farmers who are graciously giving their time to share their knowledge at these events, as well as members who make the journey to attend them.

Watch practicalfarmers.org and “Practical News,” our weekly email newsletter, for details and updates! 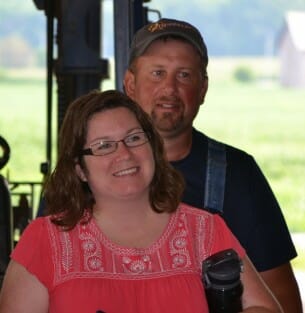 Teresa and Rodne own 120 acres of farmland near Stanwood, where they raise corn, soybeans and cover crops, primarily rye, as well as custom-grazed sheep – and they hope to add cattle within the next year.

“We’re replacing fences right now with the plan to get cattle of our own in 2018. We plan to start with feeders and then develop a breeding herd,” Teresa says. “We’ll do managed grazing and limited grain feeding on pasture, with an eye for the total system.”

Rodne farmed conventionally with his dad for many years, and Teresa grew up on a farm, but she says “this is my first foray into farming for myself. We married in 2013 and have two boys, ages 1 and 3.

When they got married, Teresa says Rodney was not farming, “for reasons beyond his control. This meant I had several years to take him to field days and watch videos about soil health and biology before we did start farming together.”

One field day the Wendts attended was the PFI trip to North Dakota in 2015, where guests visited the farms of Gabe Brown and Jay Fuhrer. Teresa says she and Rodne “learned a lot” on that trip and they hope to implement a similar farming system based on extended rotations.

“We had lots of in-depth conversations about how we could implement the principles of soil health on our farm, so we had a great plan in place before we even started. We’re very interested in the Dave Brandt / Gabe Brown system of long-term rotations for weed suppression and to limit applied fertilizers.

“We intend to do a four-year rotation in a few years, with corn-beans-rye grain-pasture, and to rotationally graze the crop fields two out of those four years. All years would have cover crops, the last two with really diverse mixes for grazing.”

Teresa says she convinced Rodne to plant 2 acres of soybeans into green rye this year, which they sprayed after planting when the rye was 4 feet tall and headed out.

“The rest was sprayed at about 2 feet tall vegetative. Rodne didn’t like it at planting time, but now the beans look very similar to the ones planted into dead rye. We’ll see how they yield, maybe I’ll get to do more acres that way next year.

“I liked the weed control, the living roots and the potential to greatly reduce herbicide use on beans. Rodne disliked stopping at the end of each pass to detach all the rye wrapped around the closing wheels. He’s refining the planter setup for next year.”

Teresa and Rodne also planted 3 acres of a Leopold pollinator mix in June and are pleased with how it’s coming along. “I’ve identified 12 forbs and several grasses so far out of a total of 80 planted, so I’m very happy with that! We also seeded down some permanent hay this year.”

Farming as a team

As the Wendts get started building their farm, they work closely together, sharing the work and taking advantage of each other’s strengths.

“We’re a great partnership,” Teresa says. “I have the ideas and he’s the mastermind behind the machinery to put the ideas in motion. Sometimes I think I’m the throttle and he’s the clutch, but we work well together.

“I do the marketing, a lot of the agronomics and decide what crops to plant, and he does the planting, spraying, harvesting, animal husbandry and all the machinery repairs.

“I haul in from the field, and we both drilled some rye last fall. We discuss most things before making decisions. It’s definitely a team effort and we couldn’t do it without each other!”

Teresa says their short-term farming goals include “successfully and profitably planting soybeans into green, growing rye” and “getting fences built to graze cattle on cover crops as well as pasture.”

Long-term, the Wendts hope to “rotationally graze grass-fed cattle on permanent pasture, as well as a four-year rotation on cropland: corn with rye cover, beans with rye cover, grow rye for seed and then warm-season cover crops afterwards, then fourth year would be just cover crops with legumes for nitrogen-fixing for the corn the following year.”