Are you growing rye or winter wheat for grain or seed this year? What’s the plan after your harvest? If you’re looking to add nitrogen for a 2019 corn crop, now might be the time to think about frost seeding red clover into that rye or wheat in late February. 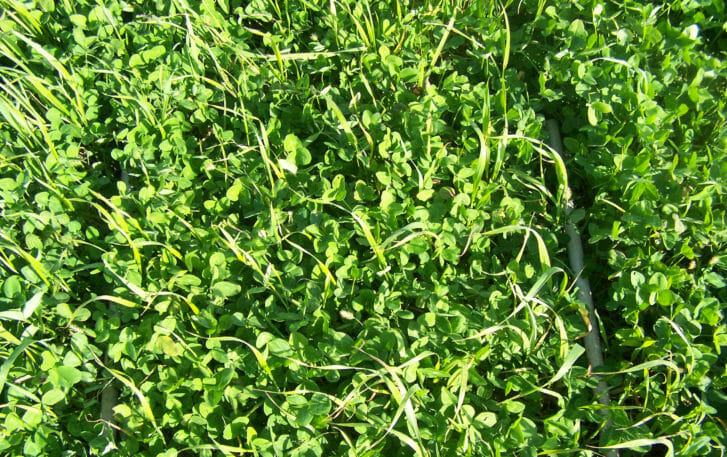 Red clover as a green manure cover crop, underseeded with oats, at Ash Grove Farm in north-central Iowa in October of 2016.

The research is clear: if you can find a market for small grains, adding a third crop to your rotation yields economic, agronomic and environmental benefits. Iowa State University and Dr. Matt Liebman’s research near Boone shows that corn and especially soybeans yield better when grown in rotation, soybeans have less incidences of disease, soil health metrics improve, erosion decreases and water quality improves – all this with equal returns to land and management.

You can learn more about Matt Liebman’s research and many of the benefits of small grains production from other farmers in this video from our Rotationally Raised series:

You can also check out a farminar Matt hosted a couple years ago with Dick Sloan and his  presentation from the 2016 small grains short course at the PFI Annual Conference.

In Iowa, most of this research and most farmers’ experience has been with adding oats and/or hay to their rotation. But now, with more and more people planting cover crops – and most of them planting cereal rye, more and more people have been raising it for seed. Saving a few dollars on cover crop seed is great, but the real opportunity comes after rye harvest when you can grow another crop.

Many people in that boat are planting multi-species cover crop mixes, and for farmers with cattle, that’s tough to beat. A balanced grazing ration that likely includes a few protein sources and plenty of sorghum-sudan grass is a great way to save money on hay costs later in the year, and maybe be able to rest some permanent pastures in the fall so they’ll produce better next year. Learn more about what farmers with livestock are planting after small grains harvest in this episode of Rotationally Raised:

Growing Your Own Nitrogen

But for row crop farmers, harvesting small grains during the summer presents a perfect opportunity to grow some nitrogen. It’s something organic farmers have been doing for years to augment manure as a nitrogen source. However, most organic farmers either have hay in their rotation or grow oats, a spring small grain, and seed red clover with the legume/forage hopper of their drill at oat planting time. 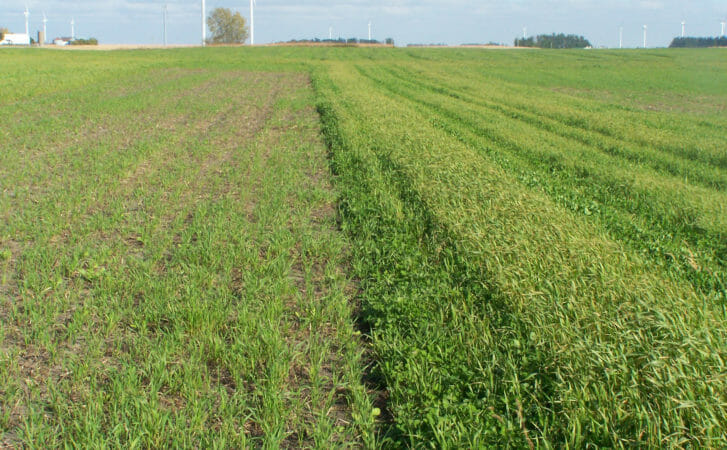 Mid-summer-seeded cover crop mix (on left) and the underseeded red clover (on right) a few months after an oat harvest at Doug Alert and Margaret Smith’s farm on Oct. 14, 2016.

But what about seeding clover into an already established winter small grain, like rye or winter wheat? Can you do it? “It’s always worked for us,” say Doug Alert and Margaret Smith, who own and operate Ash Grove Farm near Hampton in north-central Iowa. They’ve been frost seeding red clover into winter small grains for about the past 10 years, and have always managed to get a stand of clover established.

And, because they’re organic, clover establishment is crucial: “We can’t afford to have a failure because that’s a major source of nitrogen for the corn crop,” Doug says. Iowa State University research has shown that farmers can expect a nitrogen credit anywhere from 75 – 100 lb / acre.

Dr. Bill Deen studies cropping systems and nitrogen management at Guelph University in Ontario, where winter wheat is a more predominant component of cover crop rotations. Many of his findings stem from a long-term crop rotation study started in 1980 that, among other configurations, includes a rotation with red clover frost-seeded into winter wheat ahead of corn.

“What’s remarkable about red clover is you get the N credit while simultaneously increasing corn yields,” he says – in other words, the clover provides additional benefits that increase yields above and beyond its contribution to nitrogen, a phenomena known as the rotation effect. “We’re not quite sure what the mechanisms are. Certainly it does add N to the system,” he says, “but it also seems to improve the use of N by the corn crop,” Deen suspects that it may have something do with how clover affects the soil.

The other advantage of red clover over other cover crops is that the nitrogen release pattern works well ahead of corn. “It seems to have an effect on soil nitrate that is very favorable when you look at the pattern of demand by corn,” he says. Radishes, for example, may release the nitrogen too early, and rye might hold onto it for too long. “Red clover is the most consistent supplier of nitrogen,” he says.

Bill will be hosting a farminar talking all things red clover on Tuesday, February 6, 2017 at 7 p.m. Make sure to tune in – check out the spring line-up here!

Two challenges to working red clover into a winter small grain system are planting and terminating. For planting, Dr. Deen agrees with Doug and Margaret – as soon as the snow is off, but the ground is still frozen, it’s time to frost seed. “Going from impassable snow to mud is often a very short time frame,” Doug says, “So you have to be ready to go when you hit that window.”

*If you’re interested in learning more about frost seeding, mark your calendar for our February small grains shared learning call on Friday, February 2 Noon-1 PM. The call will focus on frost seeding & underseeding legumes with a small grain. We’ll hear from farmer Tim Sieren of Keota and Keith Kohler, research tech for the USDA’s small grains and green manure studies conducted in Ames. We’ll discuss:
To join the call dial 641-715-3620 and enter the passcode 357330#.

Actually doing the seeding isn’t that tough. Iowa State recommends broadcasting 10-15 lbs/ac onto frozen ground and the seeding method is likely going to be dictated by what equipment you have available. “I like that you don’t have to have a top of the line system for it to work,” Margaret says. When they first started seeding red clover into rye, Doug used a 3-point mounted fertilizer spinner, and that worked okay – he could cover a 20-25 ft. swath. Later, he switched to a grain drill and just used it as a drop seeder, but that was only 15 feet of width, and trying to cover a lot of acres quickly is tough on a drill.

So last year, he built a toolbar specifically for seeding red clover – it adds seeding capacity, and it also links into his auto-steer, which is important because he’s doing a lot of this seeding at night, when the ground is nice and hard. His setup – shown in the photo – is a Gandy Orbit-Air seed hopper mounted on a used sprayer boom with a hydraulic metering system. 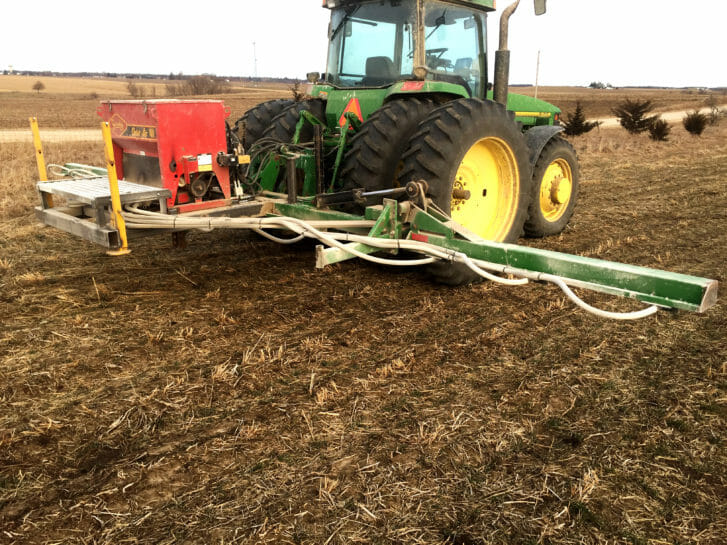 With this setup, he can seed 40 acres between fills and because he can drive 7-8 mph he can cover around 20 ac/hr. “This is all very important because of the small time window,” he says.

And, some years, the window is too short, and they don’t get a chance to frost seed. But they still seed it, even if it’s a little late, and haven’t had a failure so far. And that’s not necessarily intuitive. “Clover’s low-light tolerance is phenomenal,” says Margaret, “To me, it looks like it should never survive,” when looking at the thick blanket of rye that soon covers the clover, but adds that they’ve never had a problem getting a stand of clover established.

Once it’s seeded, there’s little management of the clover between seeding time and termination prior to corn planting. And because Doug and Margaret are organic, herbicide termination is not an option. Instead, they have traditionally plowed the clover as soon as they could in the spring; likely right after oat planting is done. They’ve been debating whether the plow is the right option for termination – or whether a lighter tillage pass would be sufficient – and whether spring or the previous fall is the appropriate time to terminate.

For conventional farmers, light tillage and plowing are still options, but termination with herbicide can also do the job. Penn State University Extension – where red clover is more commonly used as a cover crop – has some good guidelines. They recommend the following: “An excellent herbicide program to terminate a red clover stand prior to planting corn is one pint of 2,4-D LVE and one pint of dicamba (Banvel or Clarity). Apply 2,4 D and/or dicamba 7 to 14 days prior to or 3 to 5 days after corn planting if corn seeds are planted at least 1.5 inches deep. Do not plant soybeans after dicamba application. Applying 1 to 2 pounds per acre of atrazine will help provide additional control of the red clover. Glyphosate or paraquat alone are not recommended to kill a legume such as red clover.”

Practical Farmers of Iowa continues to conduct on-farm trials on the usage of red clover as a cover crop. PFI members have conducted research on many of the topics discussed in this article, from comparing red clover to mid-summer-planted mixes, to the nitrogen value of red clover, to interseeding clover into winter rye, and much more. To find the results of these trials, check out practicalfarmers.org/research and search for “red clover.”

Here are a few: