In 2020, 66 Cooperators Participated in 81 Research Trials 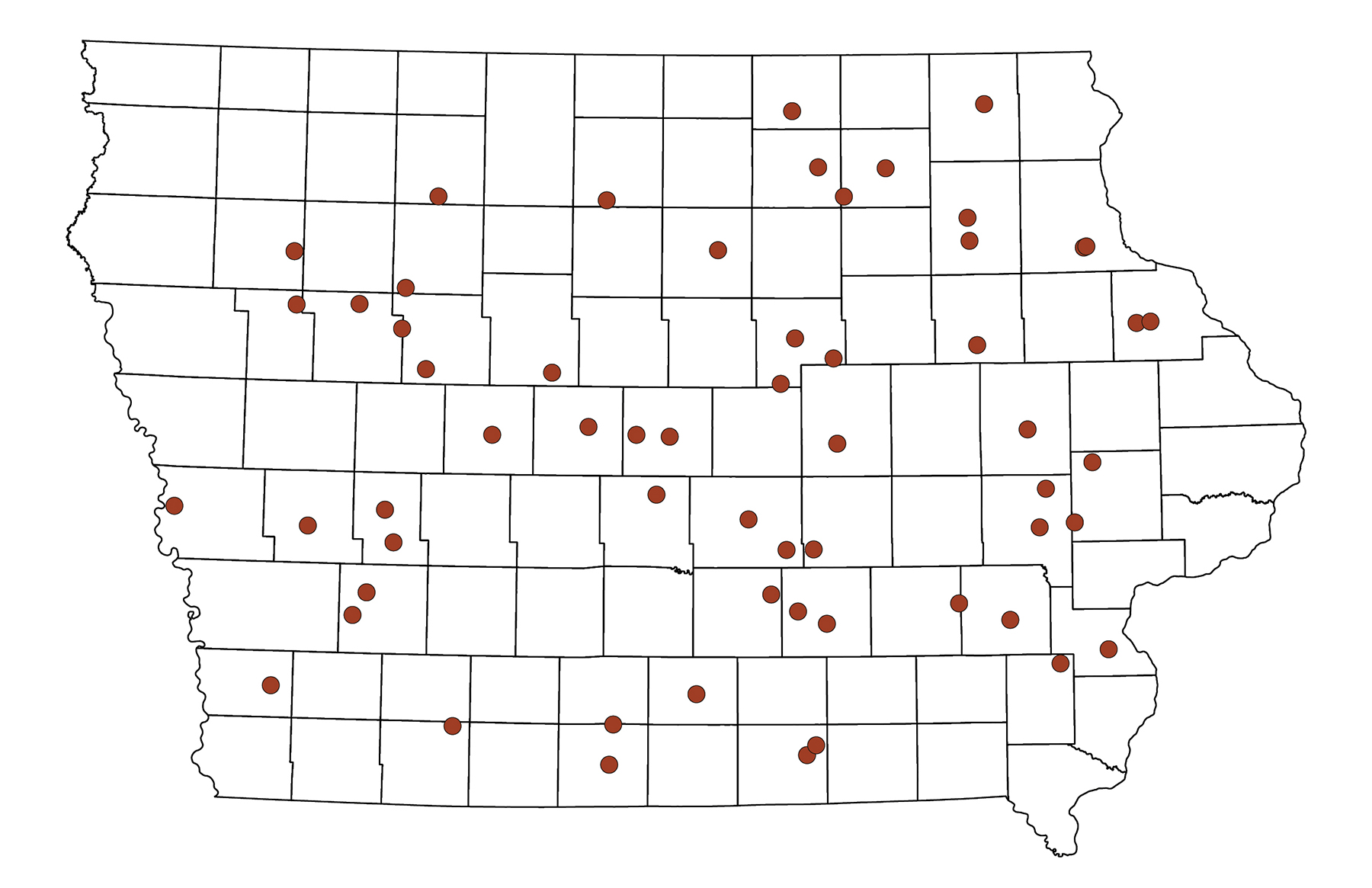 he Cooperators’ Program began in 1987 to encourage and guide research aimed at environmentally sound, lower-cost, profitable farming techniques. The program is one of several ways that Practical Farmers of Iowa carries out its mission to equip farmers to build resilient farms and communities.

We refer to the farmer-scientists who conduct on-farm research as cooperators because the first experiments in the program were done in cooperation with agricultural researchers (typically at Iowa State University). Nowadays, on-farm research trials are collaborative efforts between farmers and PFI staff scientists who guide the design of experiments based on questions posed by the participating farmers. (We do still often facilitate cooperation between PFI farmers and agricultural researchers, however; both find enjoyment and mutual benefit from these efforts). Moreover, on-farm research projects are often collaborative endeavors among several farmers. So “cooperator” applies on many levels! 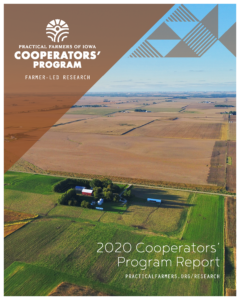 Each year, we gather at the Cooperators’ Meeting in December to share results and observations from these trials. During this meeting, all cooperators are encouraged to describe what they did, why they did it and what they found. Cooperators also generate ideas and make plans for future projects based on previous results and new questions. Before the onset of spring, cooperators and PFI staff mutually agree on project plans and commitments. When the time comes to conduct the trials, farmers are ultimately responsible for planting seeds, tending to animals and taking measurements throughout a trial.

Valid and reliable farmer-generated information is a cornerstone of the Cooperators’ Program. PFI cooperators use methods that allow for statistical analysis of their experiments’ results. Replication (see figures) is a core approach that involves repeating (replicating) the farming practices being studied at least three or four times in strips across a row-crop field or among several vegetable beds. For trials involving different grazing or habitat management, cooperators select several fields or paddocks on the farm and collect multiple observations from within each field or paddock.

Because trials results are based on three or more comparisons, it’s possible to achieve a level of statistical reliability similar to scientific experiments conducted by university researchers. Most cooperators will say that conducting on-farm research with this amount of rigor involves a lot of time and effort. They’ll also say the effort is worthwhile because it generates reliable results and has empowered them to make observations elsewhere on their farms. PFI cooperators don’t have all the answers, but they do have a tool for working towards those answers.

Field crop farmers are the largest membership contingency at Practical Farmers. Our field crops research focuses heavily on making cover crops and diverse rotations practical and profitable on cooperators’ farms. To do that, we conduct research on cover crop and small grains varieties, planting and fertilizer strategies, termination strategies and fitting these practices into farmers’ rotations. 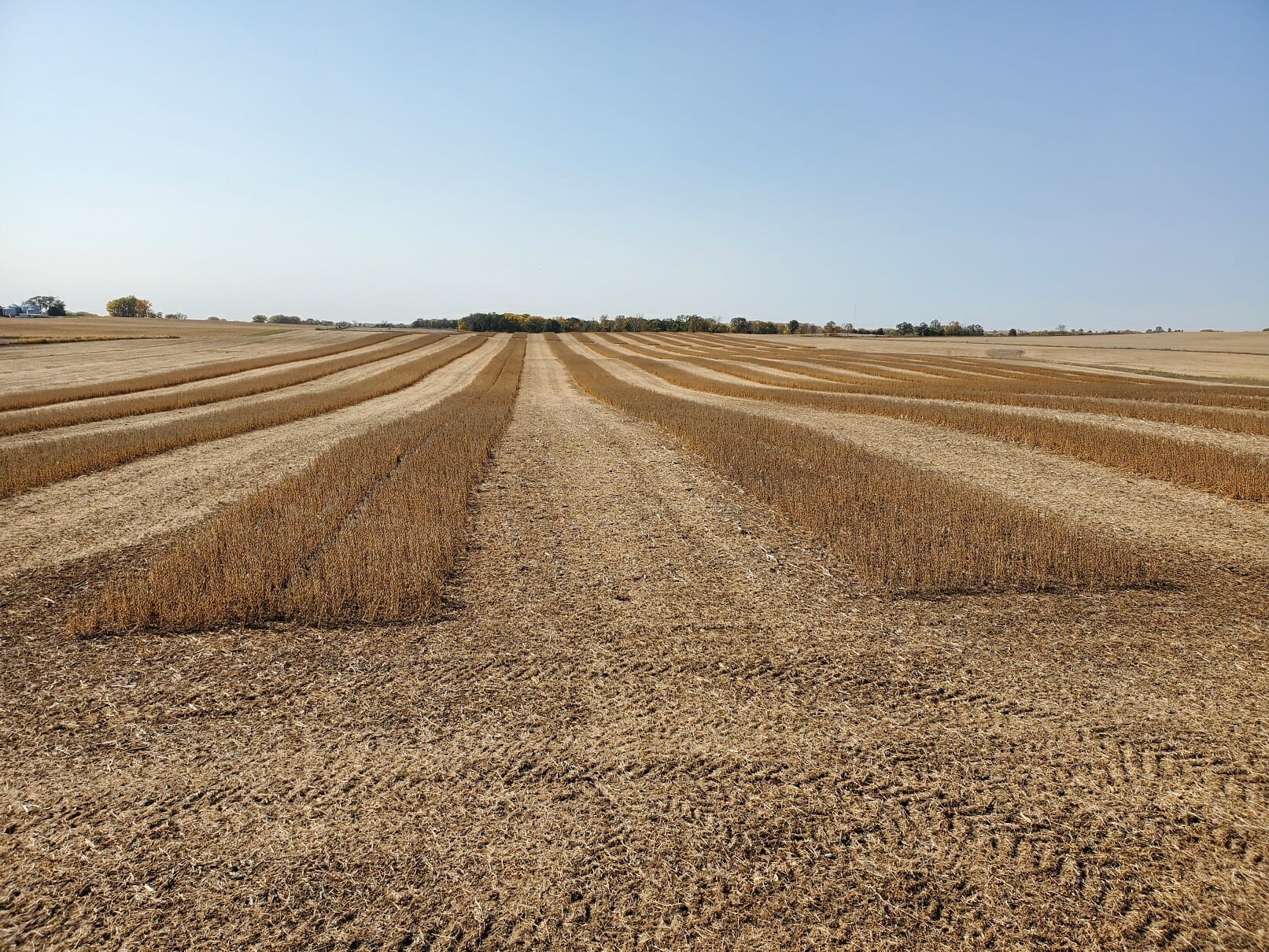 Dick Sloan questioned the value of neonicotinoid seed treatments and was concerned about their negative impacts on non-target insect species. The objective of this trial was to measure the effect of a common neonicotinoid plus fungicide soybean seed treatment on soybean yield, plant population and profitability. Dick hypothesized that treated seed would be less profitable than untreated seed and would not significantly improve soybean yield or plant population. 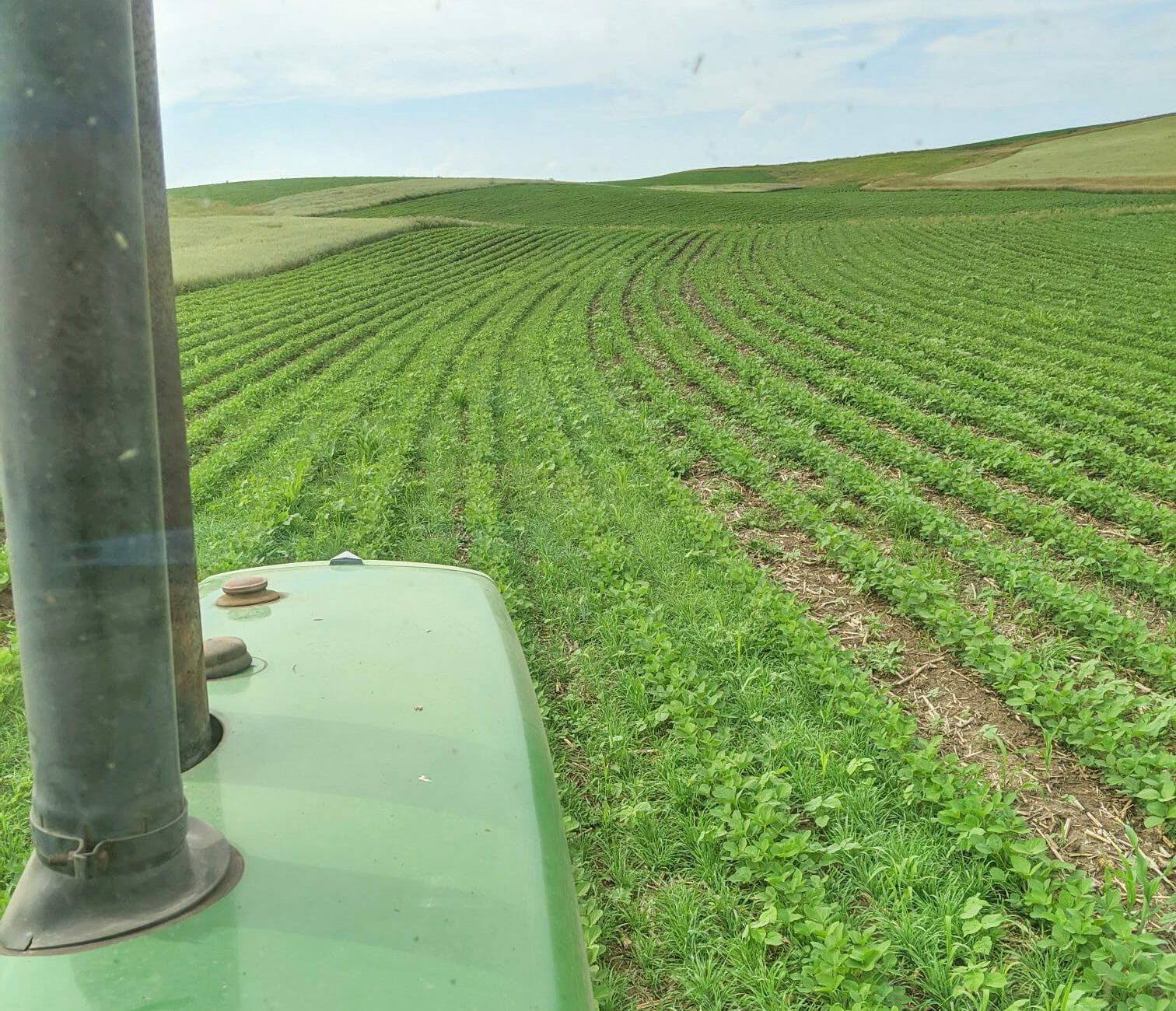 For organic field crops producers like Daniel Sheetz and Eric Madsen, managing weeds and erosion in organic soybeans poses an admirable challenge. Without herbicides, organic producers rely heavily on tillage and cover crops for weed control. And while fall-seeding cereal rye ahead of soybeans is the go-to cover crop strategy across Iowa for organic and conventional production alike, some organic growers worry about being able to control it the next spring.

Daniel’s aim for a spring-seeded cereal rye ahead of soybeans was less about reducing tillage and more about providing backup weed control in soybeans when the window for tillage is really tight, such as when high-moisture field conditions delay tillage. For Eric, the idea of spring-seeding cereal rye is appealing as a potential way to reduce weed pressure in organic soybean as well as to minimize soil erosion.

Terminating Cereal Rye After Seeding Soybeans (Or Not!) 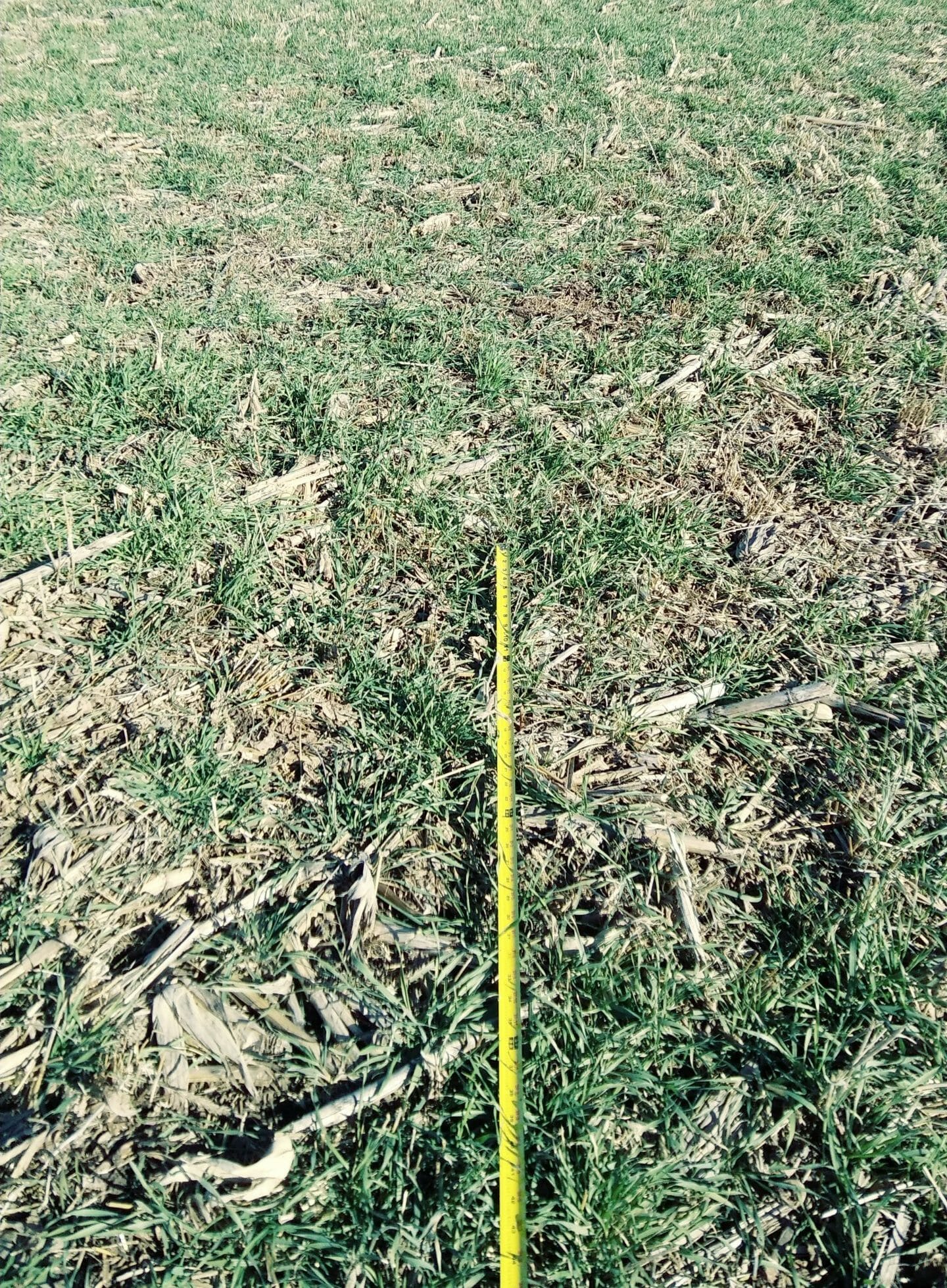 Dick Sloan hoped to determine which of two clover green manure mixes interseeded to an established winter small-grain crop would be more profitable and sustainable in his soybean-small grain-corn rotation. The objective of this trial was to compare corn yield and profitability of two green manure mixes – one that overwinters (medium red clover plus alsike clover) and one that winterkills (crimson clover plus berseem clover). Dick hypothesized the winterkill mix would produce similar results to the overwinter mix but would save the cost and labor of a burndown pass. 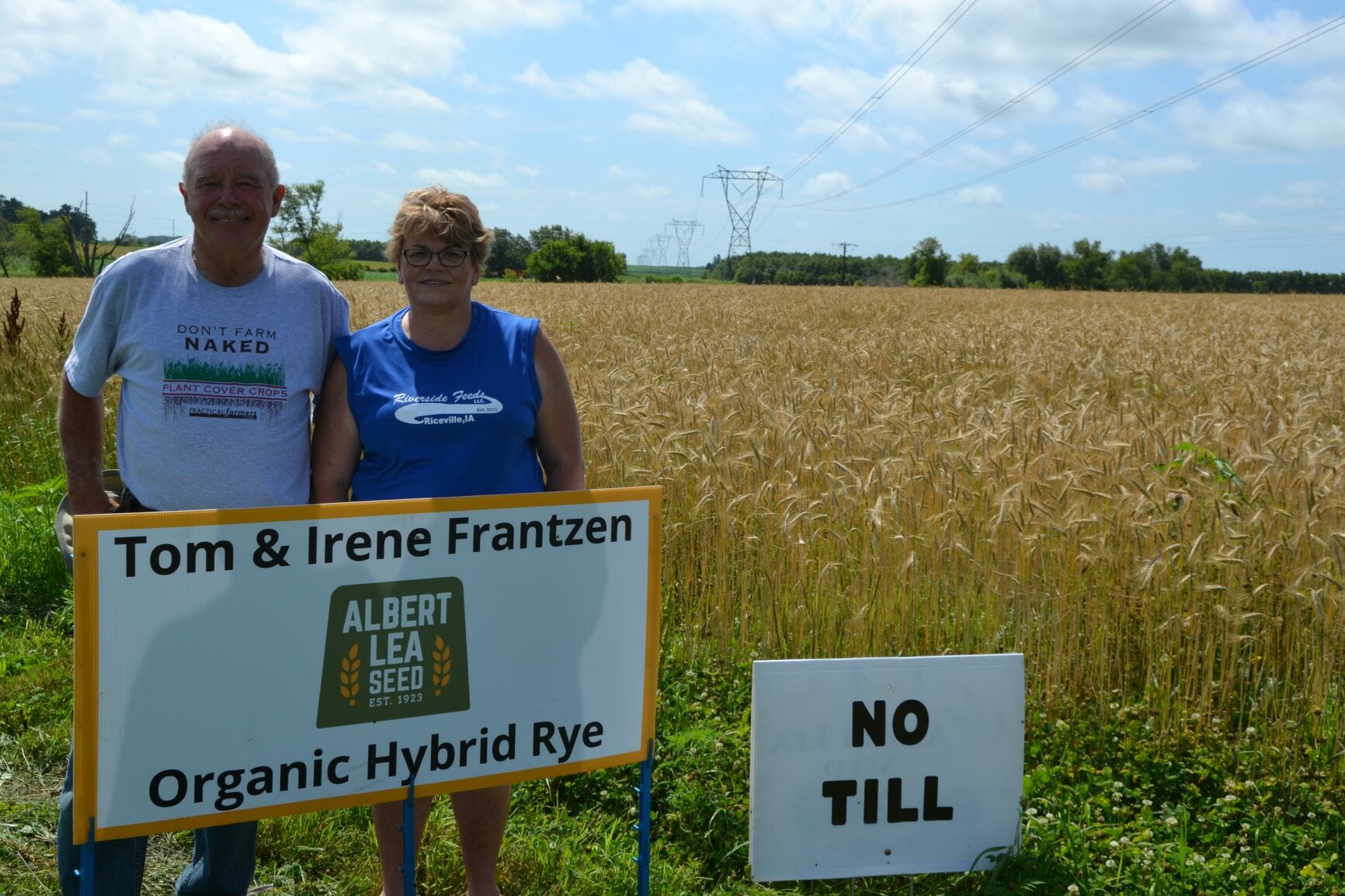 The July harvest of Tom Frantzen’s organic hybrid rye crop offers him the chance to grow a nitrogen-fixing green manure between rye harvest and planting corn the subsequent spring. Of two common green manures, Tom wanted to know which would be ideal for his operation. To determine this, he compared the effects on yield and profitability of corn preceded by red clover frost-seeded into hybrid rye and corn preceded by a cloverless green manure mix seeded after rye harvest (barley, oats, kale). He grazed both treatments with cattle in October.

With interest growing for Iowa fruit and vegetable production, the number of Practical Farmers members who raise these crops is increasing, too. 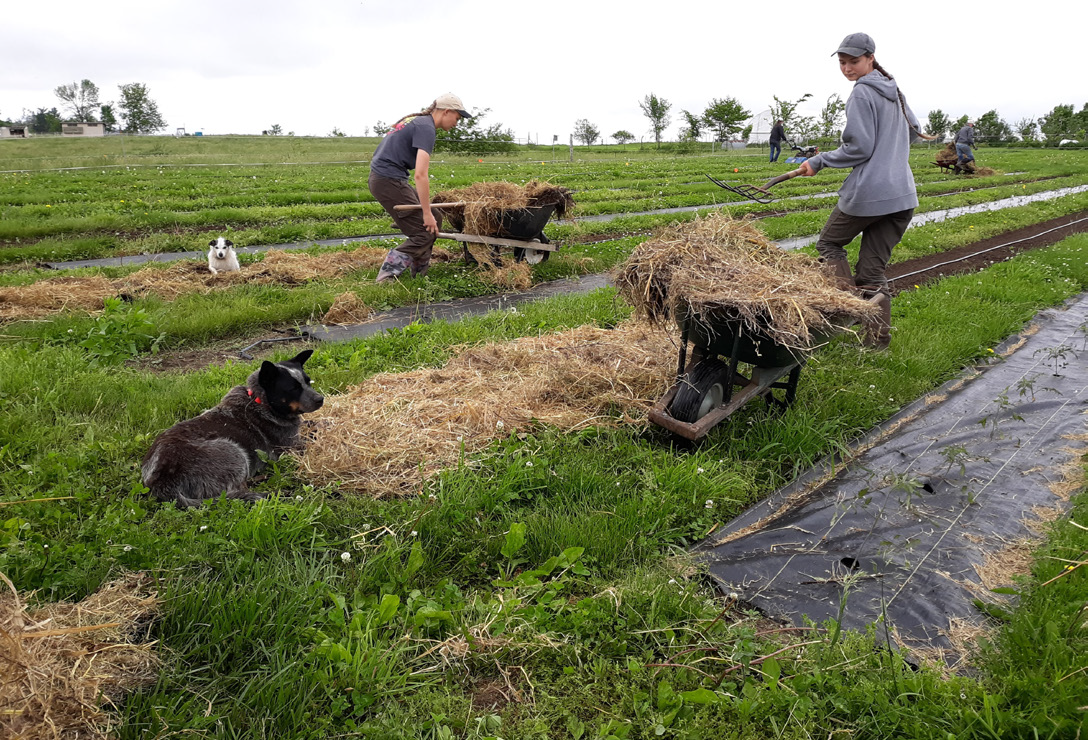 Mulch is routinely used by fruit and vegetable farmers as a weed suppressant – covering the soil blocks sunlight from germinating the weeds. This greatly decreases the time that farmers have to put into hand-weeding their beds. Another benefit to mulch is the ability to retain soil moisture during hot and dry periods. The purpose of this study was to determine the impact of fabric and straw mulch on tomato yield and labor spent prepping beds, weeding and cleaning up the beds. Jill Beebout hypothesized that tomato yield would not be affected, but plots with landscape fabric would take fewer hours to manage. 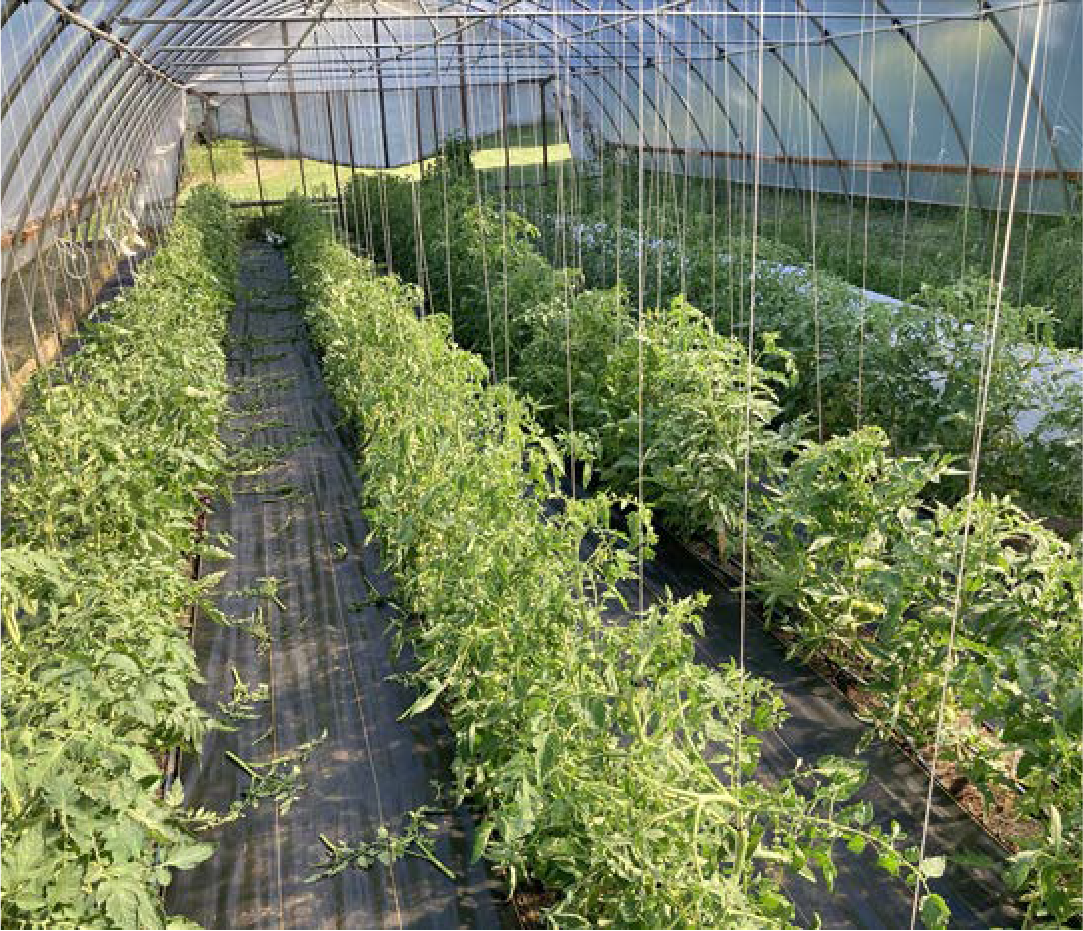 Pruning is a common technique used by farmers because it lets the plant divert its energy toward producing fruit instead of growing more foliage. With pruning, the plant produces larger fruit earlier in the season and there are fewer pest and disease issues. The objective of this project was to evaluate the impact of double-leader pruning on tomato yield and labor time in the high tunnel. Maja and Carmen Black and Natasha Hegmann hypothesized that overall yield would be lower from pruned plants, but pruning would save enough labor during harvest to offset the loss. 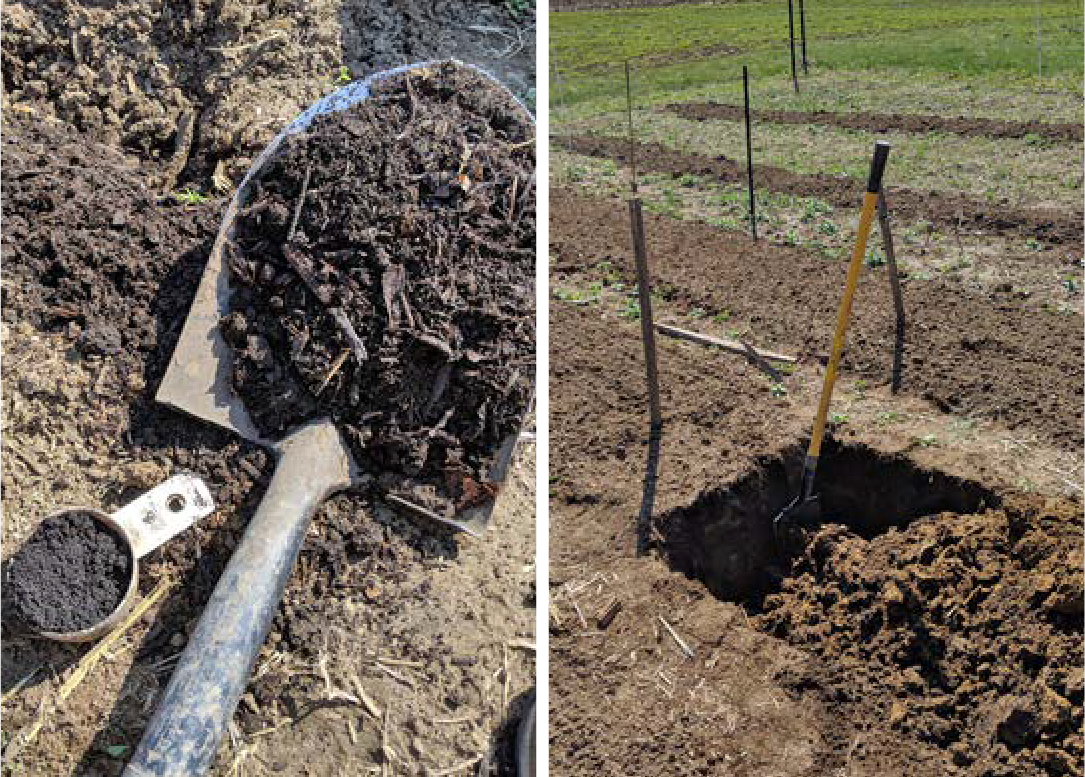 Soil compaction can cause farmers much distress because it generally leads to a reduction in agricultural productivity. Compaction can be influenced by tillage systems, machine size, irrigation methods, soil moisture content, diversity of crops and more. In this experiment, Alice compared four bed preparation techniques for broccoli to assess their effect on broccoli yield and soil compaction factors (bulk density, penetration resistance). She hypothesized that double digging would reduce compaction, but would come with a high labor cost. 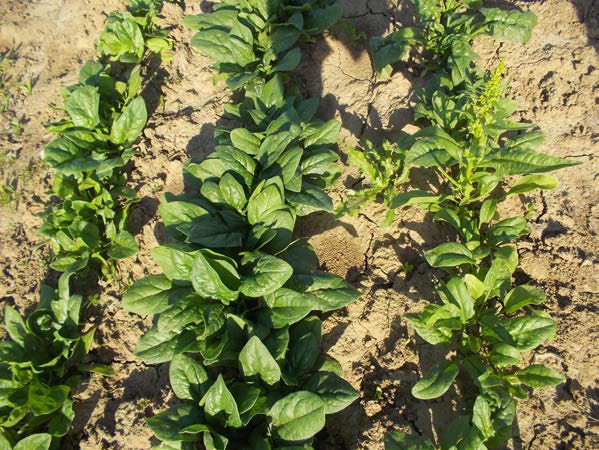 Spinach is a cool-season crop that is usually planted in spring or fall. Given the heat-intolerant nature of spinach, it can be difficult to grow. Common issues include bitter taste, low yield and early bolting, a stress response where the plant diverts resources to seeds and flowers. In this project, Hannah Breckbill and Emily Fagan, Kate Edwards and Bonnie Riggan tested three common spinach varieties: Bloomsdale, Kolibri and Space.

The cooperators were curious about which spinach variety would grow best on their farms, as measured by both output and quality, to know what to promote at CSAs and early farmers markets. “We haven’t had great success with spinach, but it’s something that customers are excited about,” Emily said. “So we are hoping to find a variety that will grow well for us.” 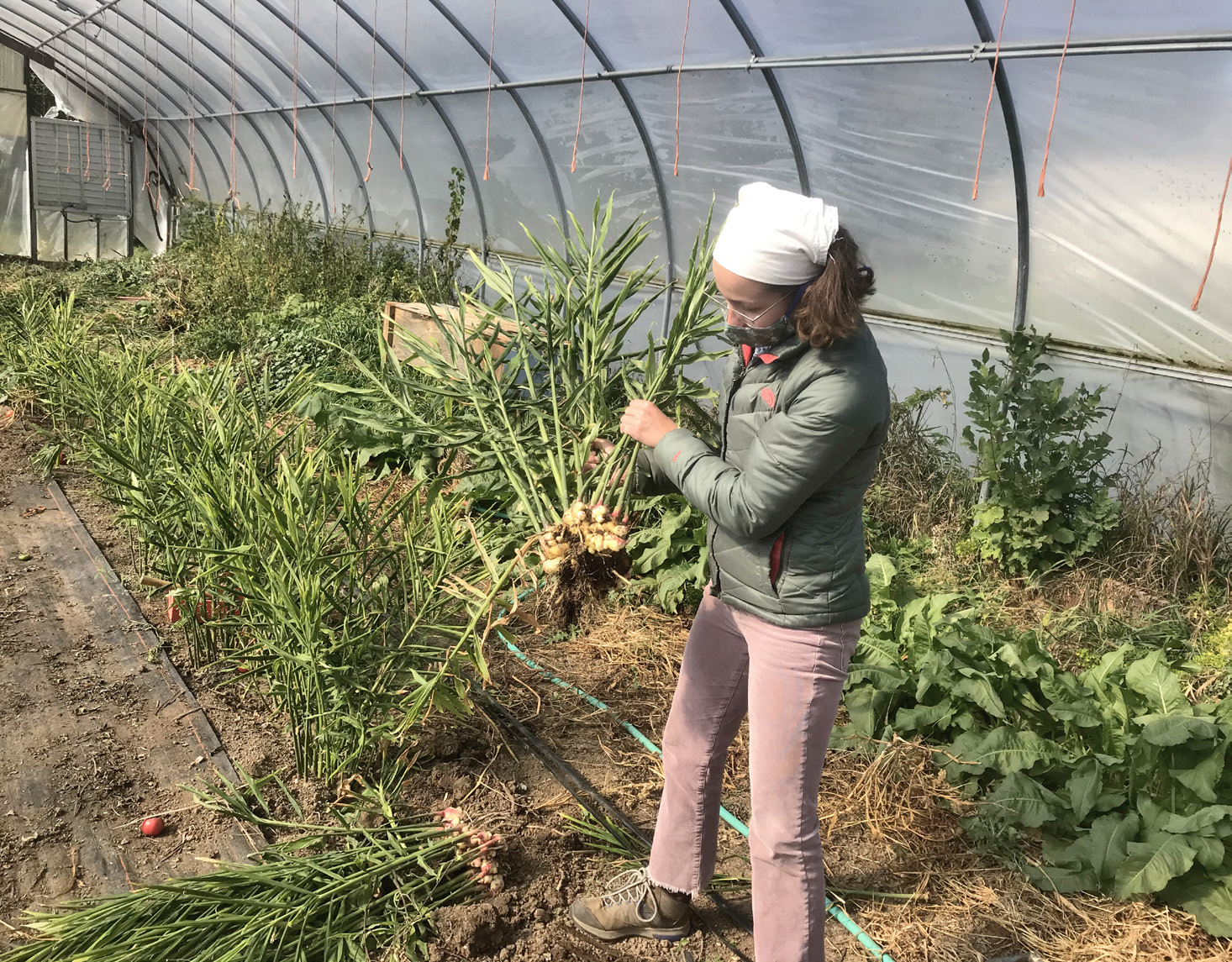 Little is known about growing ginger in the Midwest, so cooperators were curious about growing it in Iowa. They were especially curious about ideal growing conditions and what variety produces the best ginger. Cait Caughey was motivated to improve her growing practices, having only grown one variety of ginger in one environment. “Is growing [ginger] out in the field, covered, just as good?” Cait asked. “Can I grow out ginger from the co-op and have it produce the same yield?”

Molly Schintler was also motivated to improve her own practices. “Our greenhouse space is very limited, so if we can grow ginger plants that produce successfully in the field, that will open up greenhouse space for us to grow other products that cannot be field-grown,” Molly said. The cooperators expected that ginger yield would not significantly differ when grown under a cover, though they did expect better yield from the Peruvian Yellow seed ginger (Puna Organics and Biker Dude) compared to the unspecified ginger variety procured from New Pioneer Food Co-op in Iowa City. 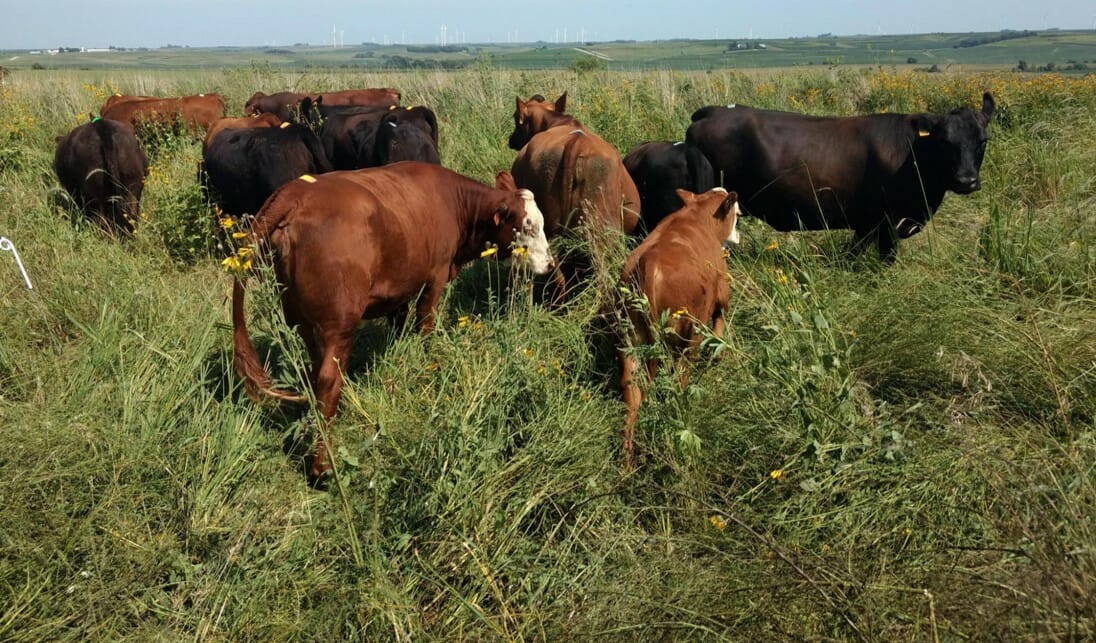 There are close to 1.7 million acres of Conservation Reserve Program (CRP) land in Iowa. Strict grazing restrictions, though, preclude the grasslands from being used as livestock forage. Research shows that properly managed grazing improves grasslands and contributes to soil health. Dave and Meg Schmidt wondered if grazing their CRP land would increase soil health. They forfeited their CRP payment in order to graze cattle on a portion of their CRP land for two weeks in August 2018, and then monitored soil health metrics (microbial respiration, active carbon, organic matter) for three years. For comparison, they included three additional fields: grazed perennial pasture, ungrazed CRP land and a row-crop field.

The objective of this project was to identify and analyze existing nectar resources (flowers) on areas of the Johnson County Historic Poor Farm where Iowa Valley Resource Conservation and Development rents land to operate its Grow: Johnson County program. Jake Kundert, with assistance from other Grow: Johnson County staff, performed flower surveys at regular intervals throughout the growing season from May through October 2020. Ultimately, they sought to identify geographic and temporal trends in flower abundance and diversity that could inform future farm management decisions to benefit pollinators.

Decomposition of Tea as a Soil Health Indicator in Agroforestry Systems

The Journey to an On-Farm Research Project: A Student's Tale