For organic field crops producers like Daniel Sheetz and Eric Madsen, managing weeds and erosion in organic soybeans poses an admirable challenge. Without herbicides, organic producers rely heavily on tillage and cover crops for weed control. And while fall-seeding cereal rye ahead of soybeans is the go-to cover crop strategy across Iowa for organic and conventional production alike, Sheetz worries about being able to control it the next spring. He does not want volunteer rye to show up in his food-grade oats that follow soybean in his crop rotation. 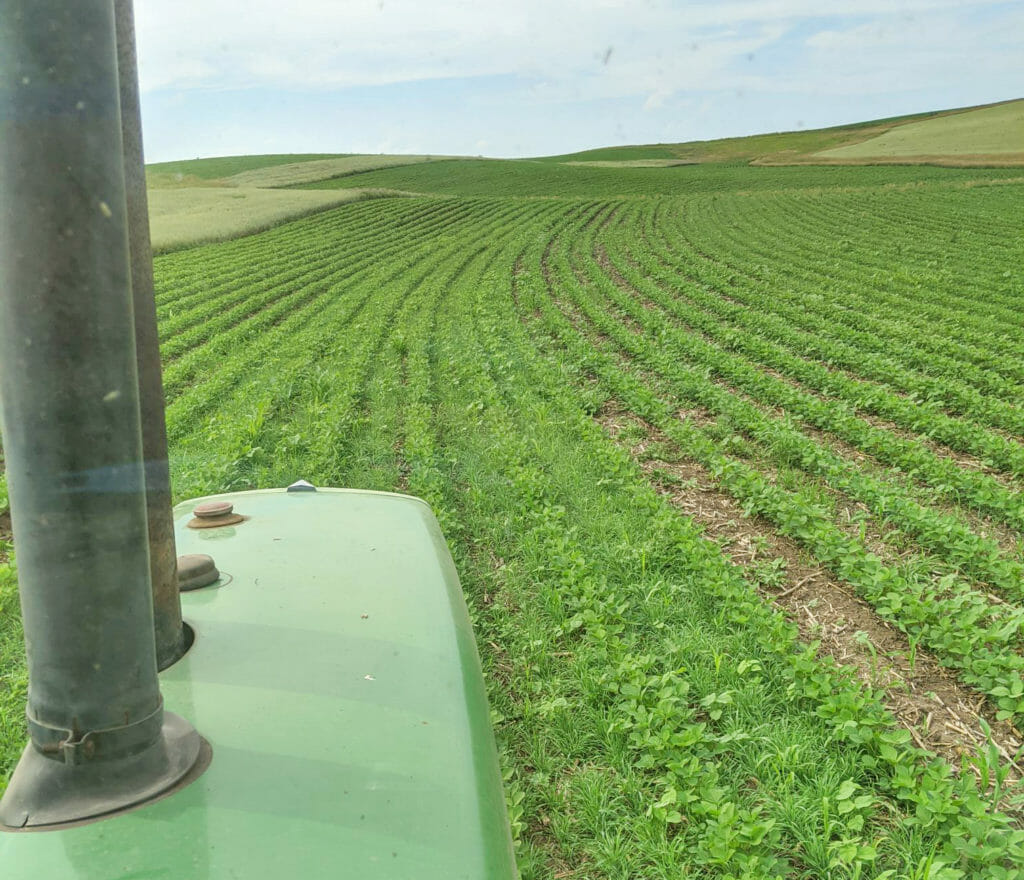 Sheetz and Madsen wanted to test the practice of spring-seeding cereal rye as a companion crop to soybean to provide in-season weed control. Sheetz sees this as an opportunity to get some weed control early in the season when the window for tillage is really tight. Other PFI farmer-cooperators have tested this in recent years. Margaret Smith and Doug Alert were curious about using spring-seeded rye as weed control for when conditions the previous season prevent them from building ridges in corn.[1] They compared two rye seeding rates and were ultimately discouraged by low soybean yields as well as inadequate control of grass weeds in both treatments. They did not want to till the rye, but heavy grass weed pressure forced their hands. Robert Alexander tested this strategy in the hopes of reducing tillage and compared different seeding dates and rates.[1] He observed poor control of grass weeds but views the strategy as an option for fields with low grass weed pressure.

Unlike Sheetz or Madsen, Alexander, Smith and Alert were rotating to corn following soybeans, meaning volunteer cereal rye was not a concern and they could leave the rye to germinate. Sheetz’s aim for a spring-seeded cereal rye ahead of soybeans was not so much to reduce tillage as much as it was to provide backup weed control in soybeans when the window for tillage is really tight, such as when high-moisture field conditions delay tillage. For Madsen, the idea of spring-seeding cereal rye is appealing as a potential way to reduce weed pressure in organic soybean as well as to minimize soil erosion. Sheetz commented, “I still think fall-seeded rye is the better option,” but spring-seeding rye ahead of soybean boosts his confidence in his ability to avoid volunteer rye in his oats following soybean.

Sheetz and Madsen hypothesized that a spring-seeded companion cover crop would reduce weed pressure without reducing soybean yield relative to a treatment with no cover crop. To test this hypothesis, they compared two treatments:

Field management at Sheetz’s and Madsen’s sites in 2020 is detailed in Table 1. Following two cultivations in the spring of 2020, Sheetz and Madsen established treatment strips by planting cereal rye. They arranged treatments randomly in neighboring strips and replicated each treatment 4 times for a total of 8 strips at each farm (Figure A1). This arrangement allowed us to conduct statistical analyses to assess the effects of a cereal rye companion cover crop on weed pressure and organic soybean yield. Treatment strips measured 180 ft by 750 ft at Madsen’s and 30 ft by 435 ft at Sheetz’s. 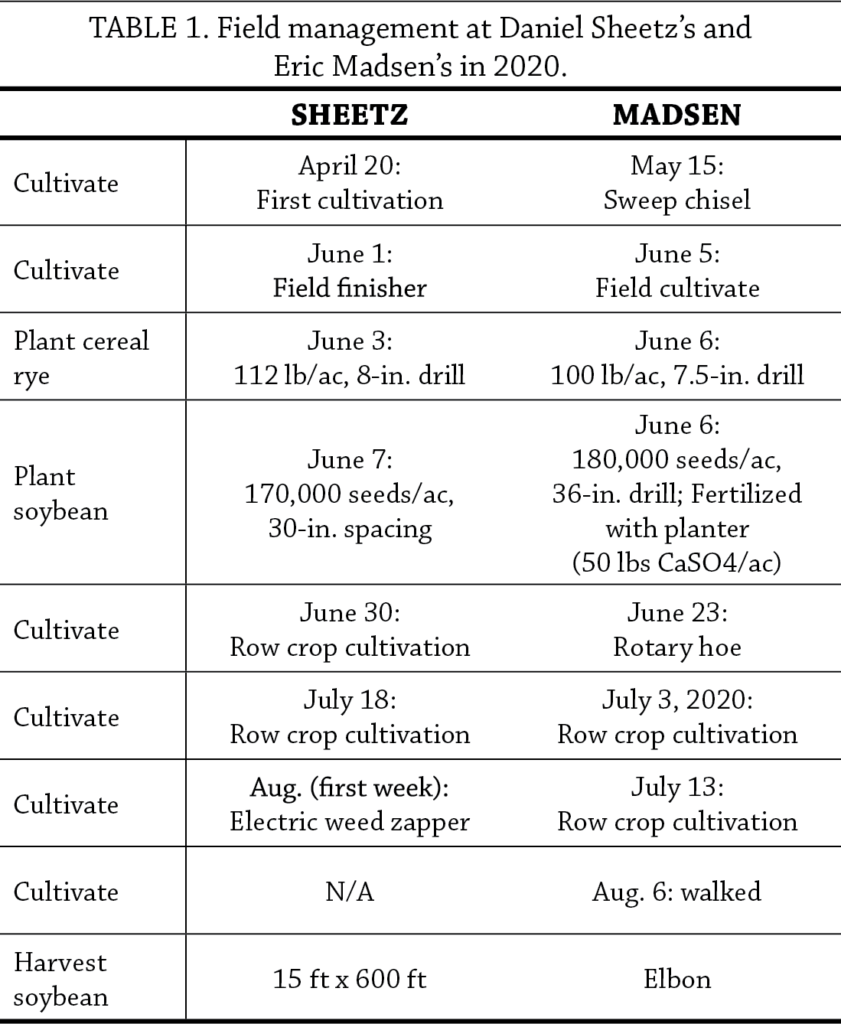 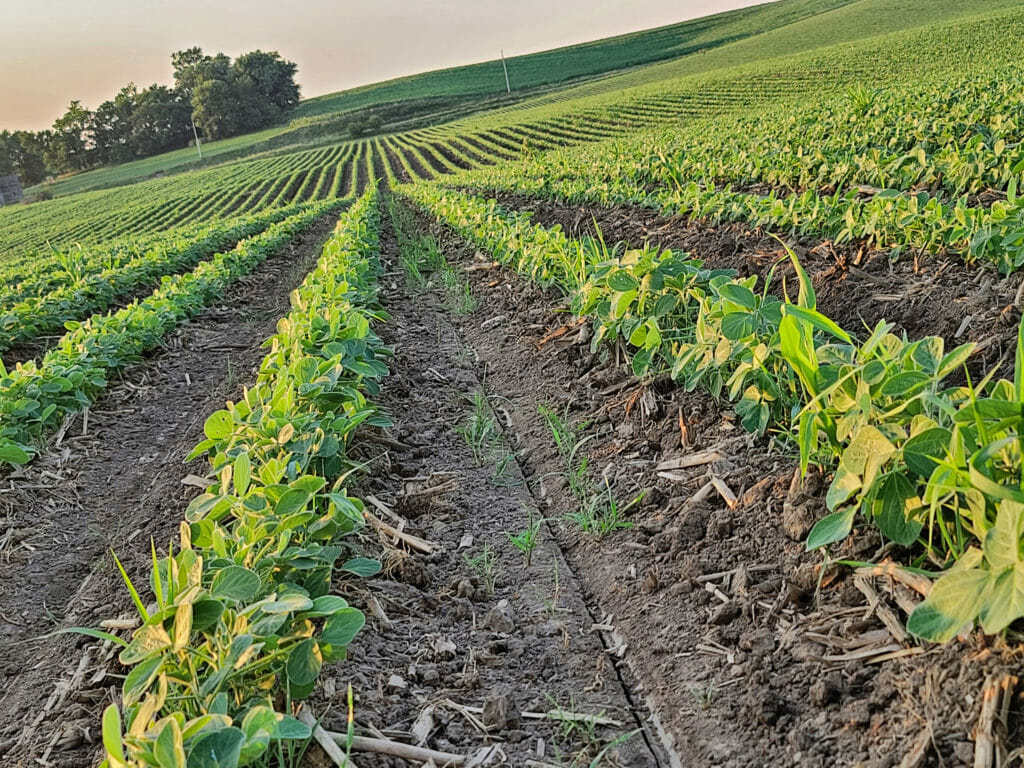 Sheetz and Madsen harvested soybeans from the middle of each strip on Oct. 16 and Oct. 7, respectively. They reported yields and percent moisture for each strip, and we adjusted yields to standard moisture (13%).

To evaluate effects of a spring-seeded cereal rye companion cover crop on weed pressure and soybean yield, we calculated treatment averages for each measurement then used t-tests to compute least significant differences (LSDs) at the 90% confidence level. The difference between each treatment’s average of a given measurement is compared with the LSD. A difference greater than or equal to the LSD indicates the presence of a statistically significant treatment effect, meaning one treatment outperformed the other and the cooperators can expect the same results to occur 90 out of 100 times under the same conditions. A difference that is less than the LSD indicates the difference is not statistically significant and the treatment had no effect.

Contrary to their hypothesis, neither Sheetz nor Madsen experienced a reduction to weed pressure in their cereal rye treatment strips (Table 2). Weed pressure was generally low in both treatments of both sites, and drought conditions through July and August likely played a role (Figure A2). 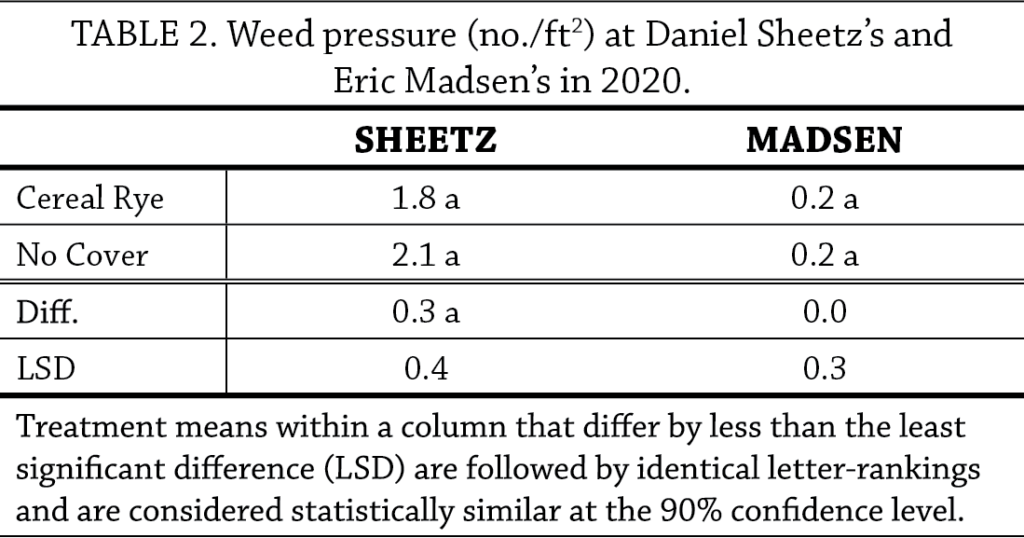 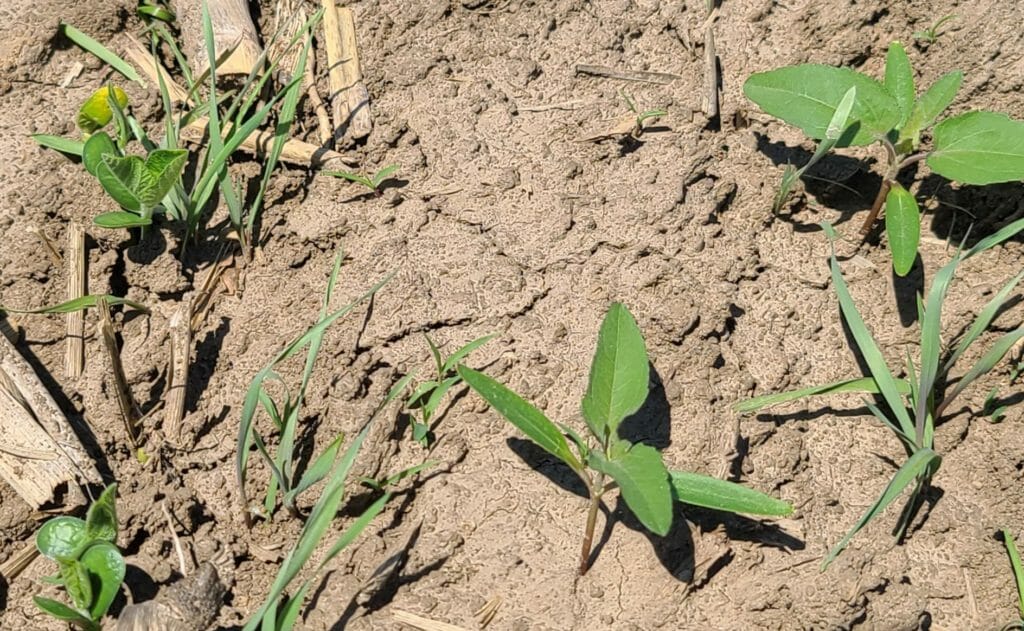 FIGURE 1. Soybean yields at Sheetz’s and Madsen’s in 2020. Columns represent yields for each individual strip. Numbers above the clusters of columns represent the average yield of a treatment. For each cooperator, if the difference between the averages is less than the least significant difference (LSD), the yields are considered statistically similar at the 90% confidence level. If the difference is greater than or equal to the LSD, the yields are considered statistically different at the 90% confidence level. 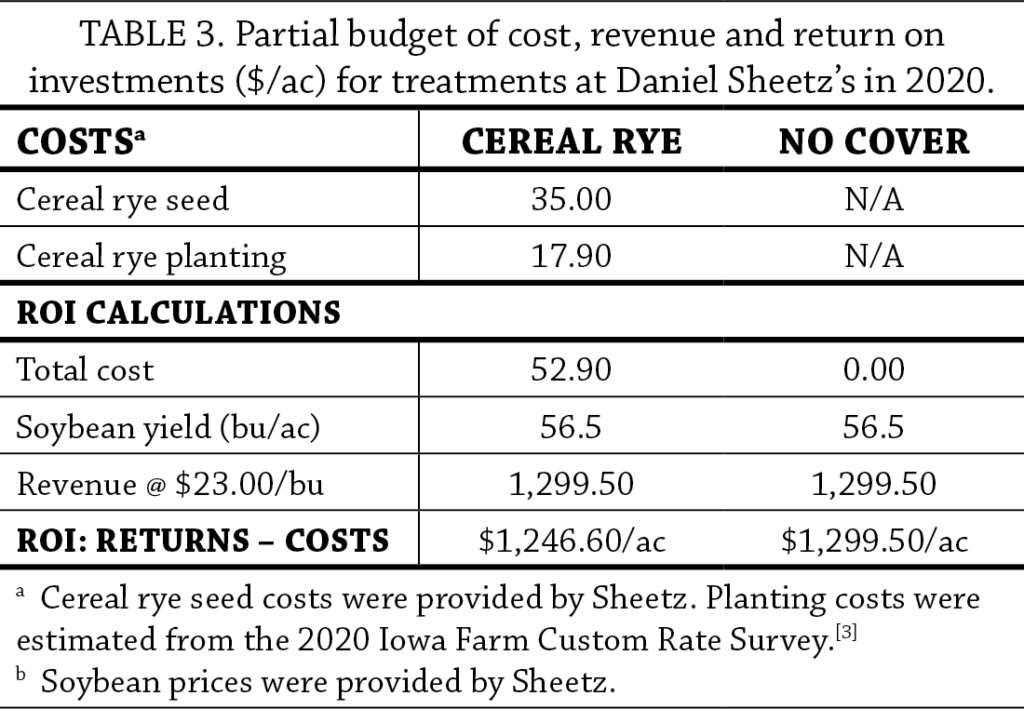 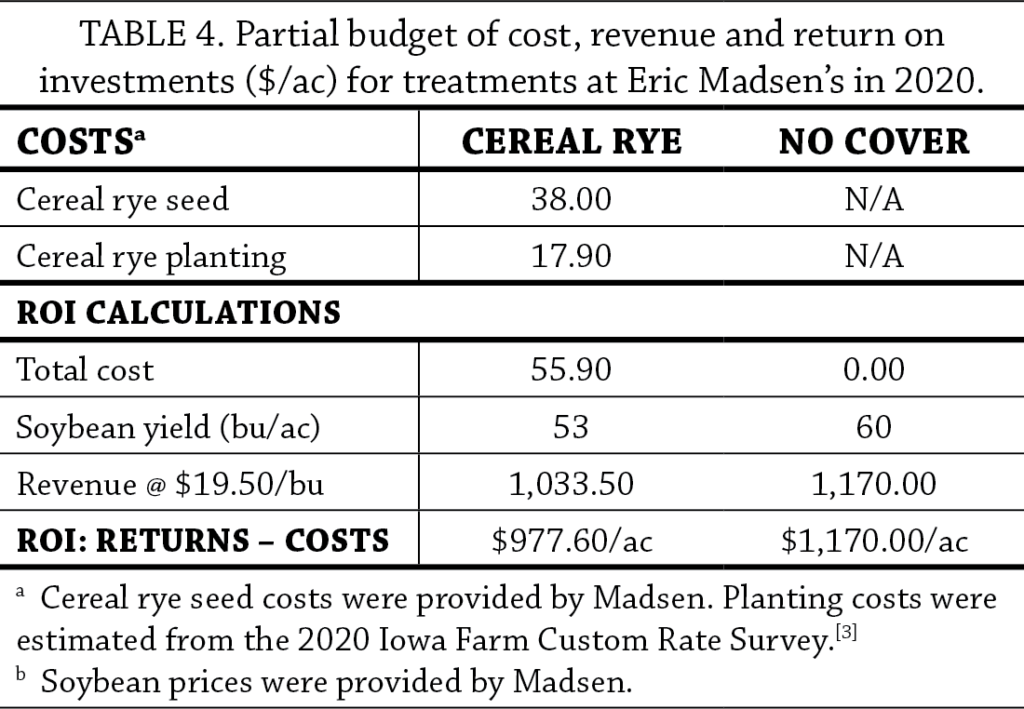 Spring-seeding cereal rye as a companion cover crop in organic soybean provided similar weed control to a no cover treatment at Sheetz’s and Madsen’s farms in 2020; however, the same treatment reduced soybean yield at Madsen’s and reduced ROI at both sites by $53/ac and $192/ac, respectively. Reflecting on the trial, Madsen commented, “I feel the drought likely skewed my results.” It is possible that repeating the trial in a wetter year might result in different weed pressures and results. In the three years preceding this trial, Sheetz found some success fine-tuning the practice of spring-seeding cereal rye in both corn and soybean; however, when asked if he will change practices more permanently as a result of conducting this trial, Sheetz responded, “I will possibly select for shorter season corn hybrids to give me an opportunity to plant rye in the fall.” 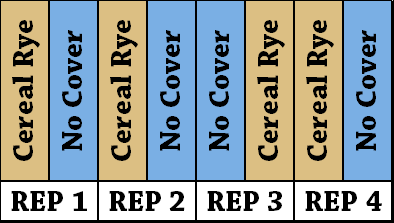 FIGURE A1. Sample experimental design used by Sheetz and Madsen. The design consists of four replications of both treatments (8 strips total) and allows for statistical analysis of the data. 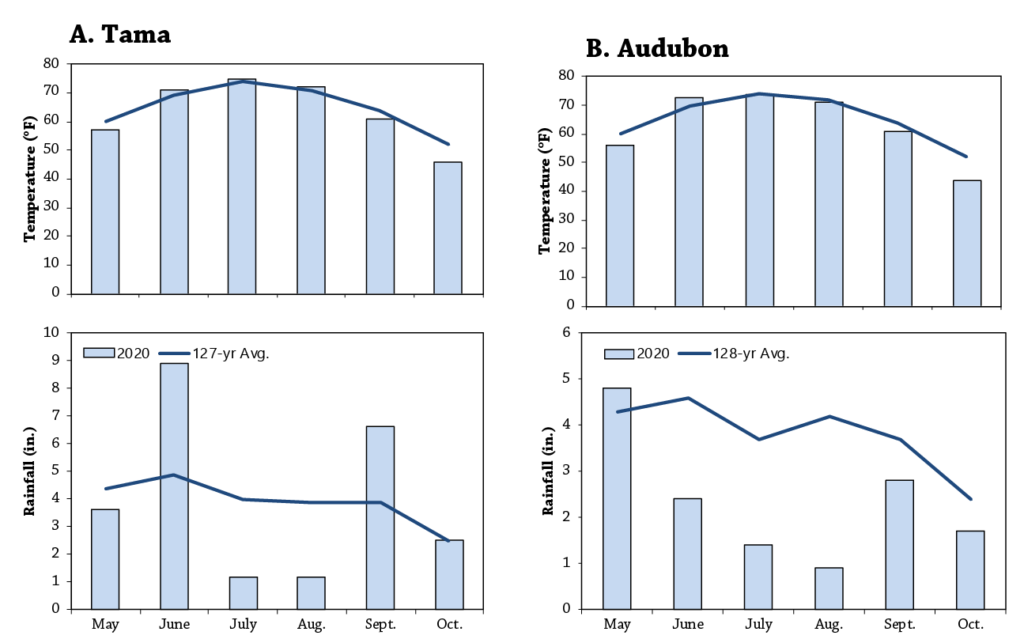