This research was funded by The Cedar Tree Foundation.

The Conservation Reserve Program (CRP), administered by the Farm Service Agency (FSA), encourages farmers and landowners to convert highly erodible cropland or other environmentally sensitive acreage to vegetative cover, such as native grasses, in exchange for an annual payment.[1] The primary goals of the CRP program are to reduce soil erosion and provide habitat for grassland birds. 1,674,453 acres of Iowa land is enrolled in the CRP program.[2]

Dave and Meg Schmidt, of Troublesome Creek Cattle Co., grazed a portion of their CRP with cattle for two weeks in Aug. 2018 and monitored soil health metrics for three years.

Much of the CRP land in Iowa could be utilized as grazing land, but restrictions apply to grazing these areas. To graze CRP, a farmer has to take a 25% reduction in their annual payment and only graze between April 1 to May 14 and August 2 to September 30, to ensure grazing does not interfere with the primary bird nesting season.[3]

Research shows that livestock integration and properly managed grazing contribute to soil health,[4] and Dave and Meg Schmidt wondered if grazing their CRP land once during one of the allowed periods would increase certain soil health factors, such as soil organic matter (SOM). After grazing a portion of their CRP in August 2018, Dave and Meg monitored soil health metrics for three years and included for comparison three adjacent fields under different management: grazed perennial pasture, ungrazed CRP land and a row-crop field.

The Schmidts established four fields under different management from which they monitored soil health metrics (Table 1).

In the grazed CRP field, grazing took place once in August 2018. The field contained “plenty of low quality forage not suitable for finishing steers and lactating cows lost condition” according to Schmidt. “Ideally we’d be grazing this field in July for high quality feed, but that is restricted by NRCS.” Cattle grazing was controlled by temporary electric fencing and basic management-intensive grazing principles were followed including: allowing adequate rest for the vegetation after grazing, keep grazing periods shorter than the time required for grass to resume growth after being initially grazed, and taking less than 50% of the standing forage biomass. Grazing took place during the time frame allowed by the CRP contract. 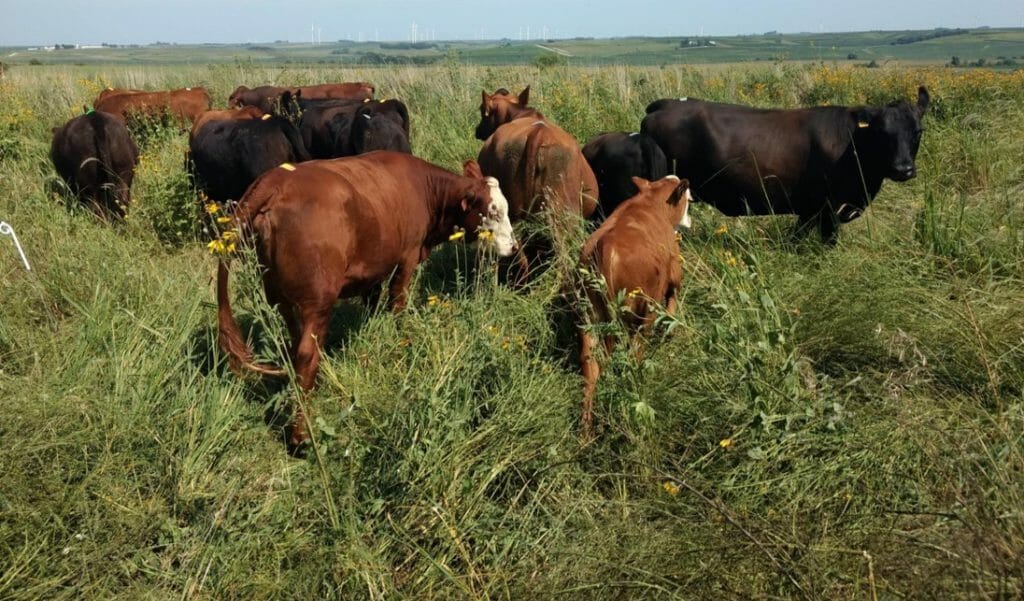 August 2, 2018 cattle were turned into the CRP field to graze.

Soil samples were collected four times per year in 2018, 2019 and 2020 in four fields. Three samples were collected by AgSource Laboratories (Ellsworth, IA) from GPS established locations in each field on each sampling date. All fields and sampling sites were within 1.5 miles of each other. Soil class, soil description and landscape position of the sample locations is listed in Table 2. 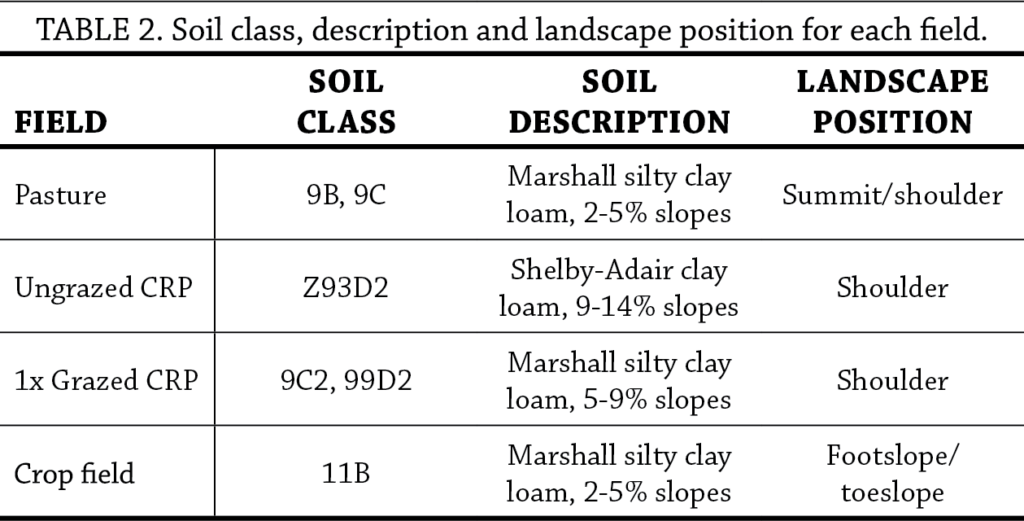 August 4, 2018 after two days of grazing the CRP field. “We like to see a lot of that standing forage get trampled, but we just couldn’t get the cattle packed in tight enough for long enough to knock the native grasses down while trying to balance the needs of our cows and calves,” explained Schmidt.

Figure 1 shows that microbial respiration in each field tended to fluctuate through the year; except in 2020, presumably due to severe drought (Figure A2) that likely limited microbial activity in all fields. In 2018, microbial respiration increased through the year for the three fields in perennial vegetation (pasture, ungrazed CRP, grazed CRP); in the row-crop field, respiration did not change through the year. In 2019, ungrazed pasture behaved similarly to 2018. The pasture and the CRP that was grazed in 2018, however, displayed a different pattern; namely, between the first (June) and second (July) sample dates. That the pasture and grazed CRP displayed similar patterns to one another could be a function of the similar soil types (Table 2). The row-crop field remained consistently low in microbial respiration all three years relative to the other fields in perennial vegetation. Overall, the fields in perennial vegetation had more fluctuation and higher rates of microbial activity than the row-crop field, presumably due to increased abundance and species diversity of microbes in perennial systems. 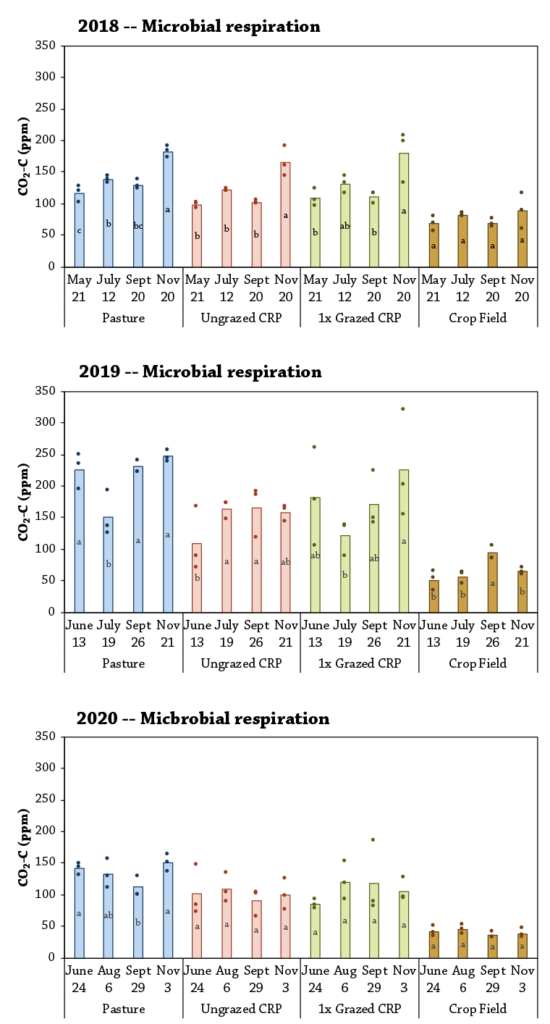 FIGURE 1. Soil microbial respiration (CO2-C burst from soils) for each field at each sampling date in 2018, 2019 and 2020. Each column represents the mean and the points represent individual samples. Analysis was conducted separately for each field in each year. By field, results that differed by less than the least significant difference (LSD) are followed by the same letter-rankings and are considered statistically equal. Results followed by a different letter ranking are considered statistically different at the 90% confidence level. 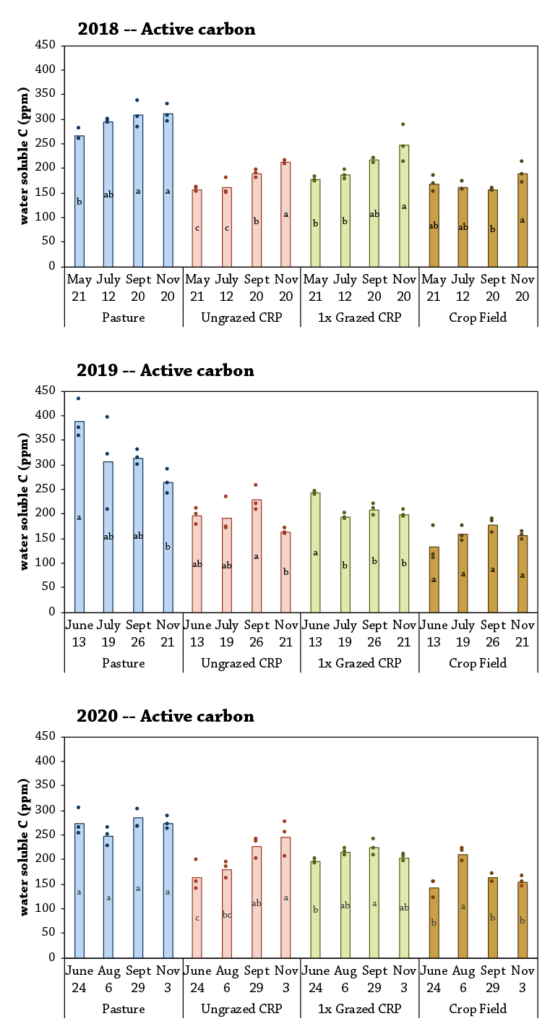 FIGURE 2. Active carbon (water soluble carbon) for each field at each sampling date in 2018, 2019 and 2020. Each column represents the mean and the points represent individual samples. Analysis was conducted separately for each field in each year. By field, results that differed by less than the least significant difference (LSD) are followed by the same letter-rankings and are considered statistically equal. Results followed by a different letter ranking are considered statistically different at the 90% confidence level.

Figure 3 shows OM in each field remained constant over three years and the fields ranked similarly with one another throughout the three years. The pasture consistently measured the highest OM. The ungrazed CRP and crop field are statistically equal throughout the three years, and consistently have the least OM. The grazed CRP started and ended with more OM than the ungrazed CRP, therefore increased OM cannot be attributed to any potential effect from grazing in 2018. Differences in OM are likely due to inherent soil properties that reflect long-term management, soil texture, landscape position or a combination of all three. 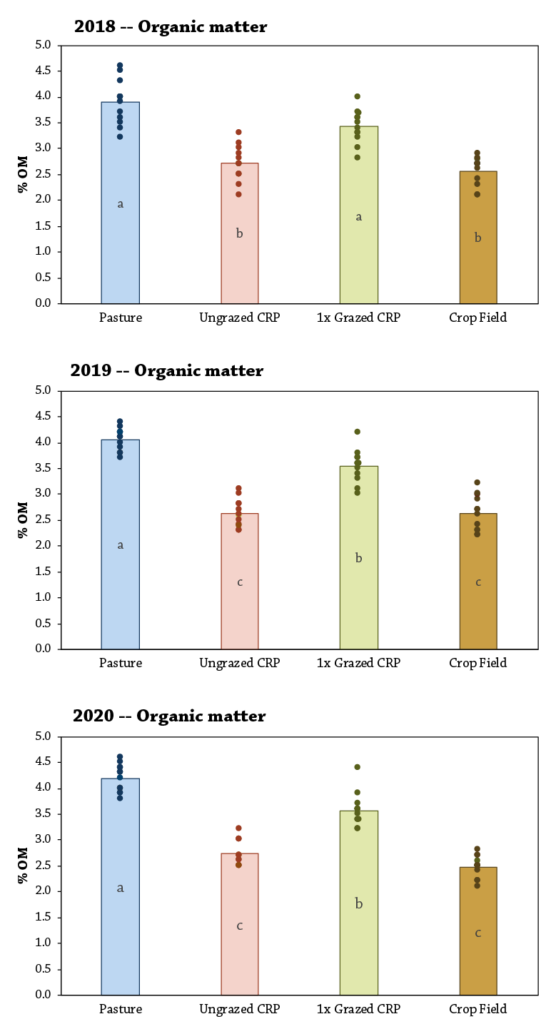 FIGURE 3. Soil organic matter (OM) for each field in 2018, 2019 and 2020. Each column represents the mean and the points represent individual samples. Analysis was conducted with sampling dates for each field combined within the same year. By year, results that differed by less than the least significant difference (LSD) are followed by the same letter-rankings and are considered statistically equal. Results followed by a different letter ranking are considered statistically different at the 90% confidence level.

Figures 4 and 5 show that with more OM, both microbial respiration and active C increase. This suggests that farmers who wish to improve soil health metrics in their fields should probably embrace practices that promote increasing OM. Admittedly, this can be a long-term process. Some fields are inherently high in OM while others stand a lot more to gain and this is often a function of soil texture, long-term management and climate conditions. 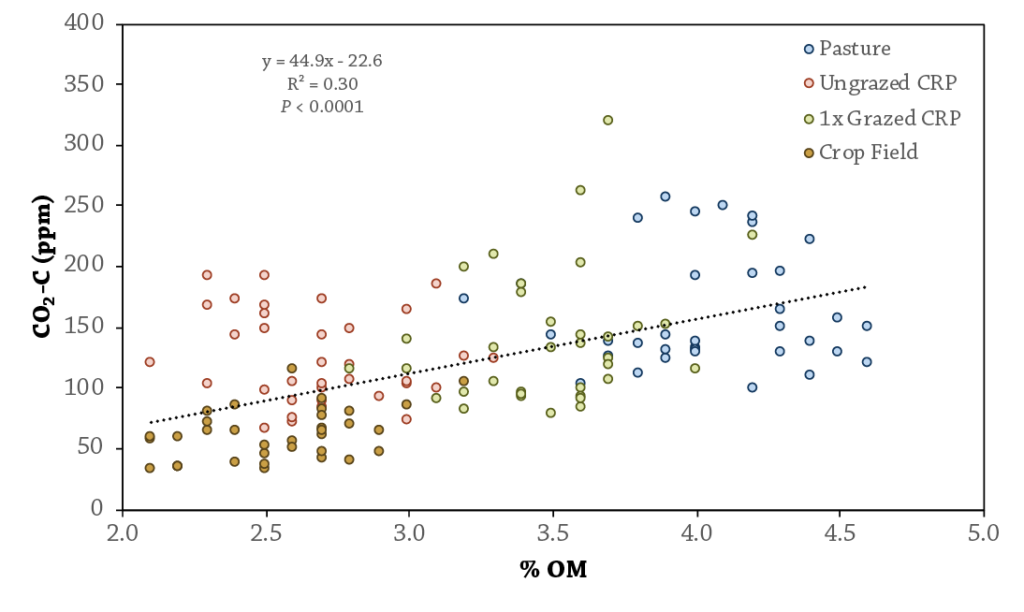 FIGURE 4. Relationship between soil organic matter (OM) and microbial respiration (CO2-C burst) across all samples from each field in 2018, 2019 and 2020. 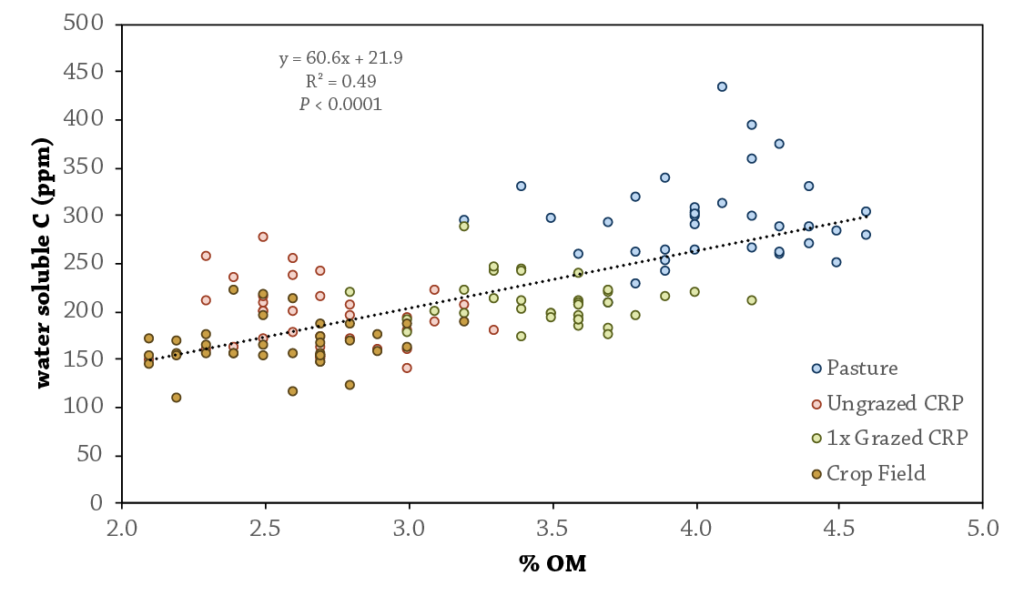 FIGURE 5. Relationship between soil organic matter (OM) and active carbon (water soluble C) across all samples from each field in 2018, 2019 and 2020.

Although the results do not indicate that grazing a section of a CRP field made a significant difference in soil health over three years, Dave Schmidt believes soil health will improve over the long term. “The key is to really hammer it like the buffalo did and then leave it for a year, but that’s just about impossible in terms of [CRP] management. The cattle had to be kept at a lot lower density since the vegetation was tough and woody in August,” explained Schmidt. Importantly, this research showed that grazing did not have a detrimental effect on the CRP field.

In drought years, such as 2020, the FSA allows emergency grazing of CRP acres with no payment reduction.[6] Schmidt thinks, “CRP is very valuable during a drought, but marginal when it’s not rent-free. Even if we were allowed to graze out of season I think the animal days per acres would be a lot lower than in cool-season perennials, although average daily gains are probably similar around late June to mid-July.”

In conclusion, the CRP grazing period (2 weeks in August 2018) may not have been long enough for animal impact to make a difference in soil health indicators. When comparing all four fields, it is evident perennial vegetation supports increases to soil microbial activity and soil health compared to the row-crop field containing annual vegetation (corn, soybeans). In theory, managed grazing of CRP land on a consistent basis could potentially improve the health of CRP soils.

FIGURE A1. The Schmidts’ design consisted of four fields that each contained three GPS locations from where soils were sampled four times each year from 2018-2020. 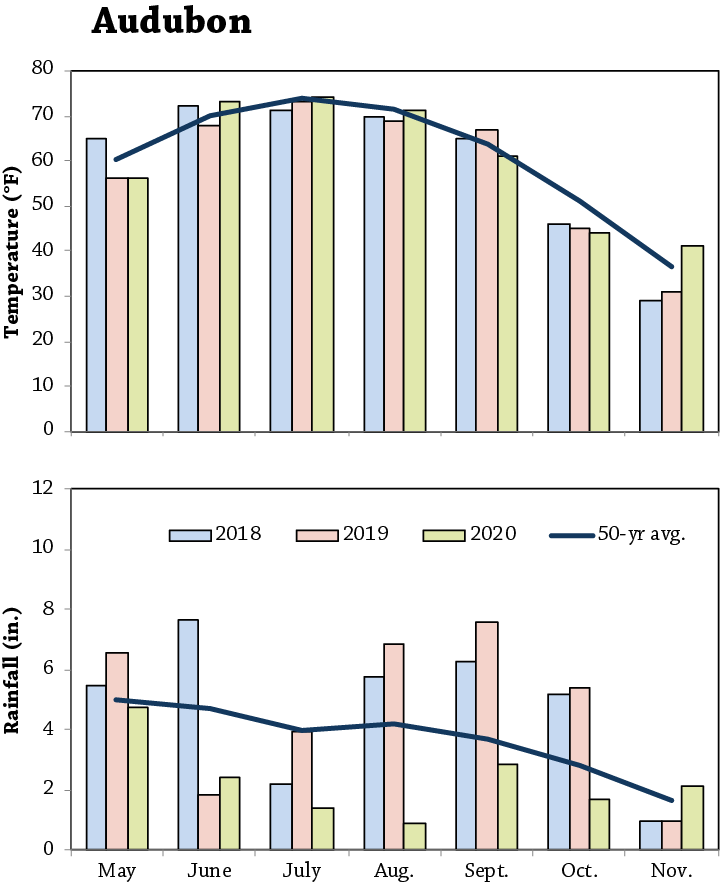