Terminating Cereal Rye After Seeding Soybeans (Or Not!) 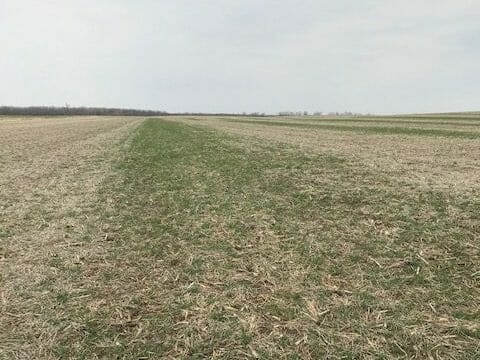 Cereal rye in Bakehouse’s delayed termination strips that “self-seeded” in 2019 and emerged the spring of 2020 in the first year of this trial. Photo taken March 31, 2020.

Eager to push the envelope and determine precisely how long they could prolong the growth of a cereal rye cover crop in their soybeans without sacrificing yield and profitability, as well as intrigued by the possibility of simply not terminating the cover crop, Bennett and Bakehouse made some modifications and conducted the research a second year. In 2020 they compared differences in cover crop biomass, weed pressure, soybean stand count, soybean yield and profitability of four termination treatments:

Ultimately, both Bakehouse and Bennett are interested in maximizing the benefits of cover crops to their soil, livestock, weed management and bottom lines. Bennett remarked, “I hope to use this data to maximize the benefits we can capture by using a cereal rye cover crop. I’d like to contribute to data that could change the way RMA [USDA Risk Management Agency] regulates cover crop termination guidelines.” Bennett was referring to RMA guidelines that restrict cover crop termination dates in western Iowa to on or before the date of planting soybeans in order to qualify for crop insurance.[2]

Bakehouse established treatment strips by chemically terminating rye in his at-plant treatment strips on the same date of planting soybeans (Table 1). Bennett was prevented from terminating rye in his at-plant treatment due to wet weather. Subsequent termination dates and products used in each treatment are detailed in Table 1. Cooperators arranged treatments randomly in neighboring strips and replicated treatments 4 times for a total of 16 strips at each farm (Figure A1). This arrangement allowed us to conduct statistical analyses to assess the effects of termination date on cover crop biomass, weed pressure, soybean stand count and soybean yield. Treatment strips measured 60 ft by 1,140 ft at Bennett’s and 30 ft by 590 ft at Bakehouse’s. 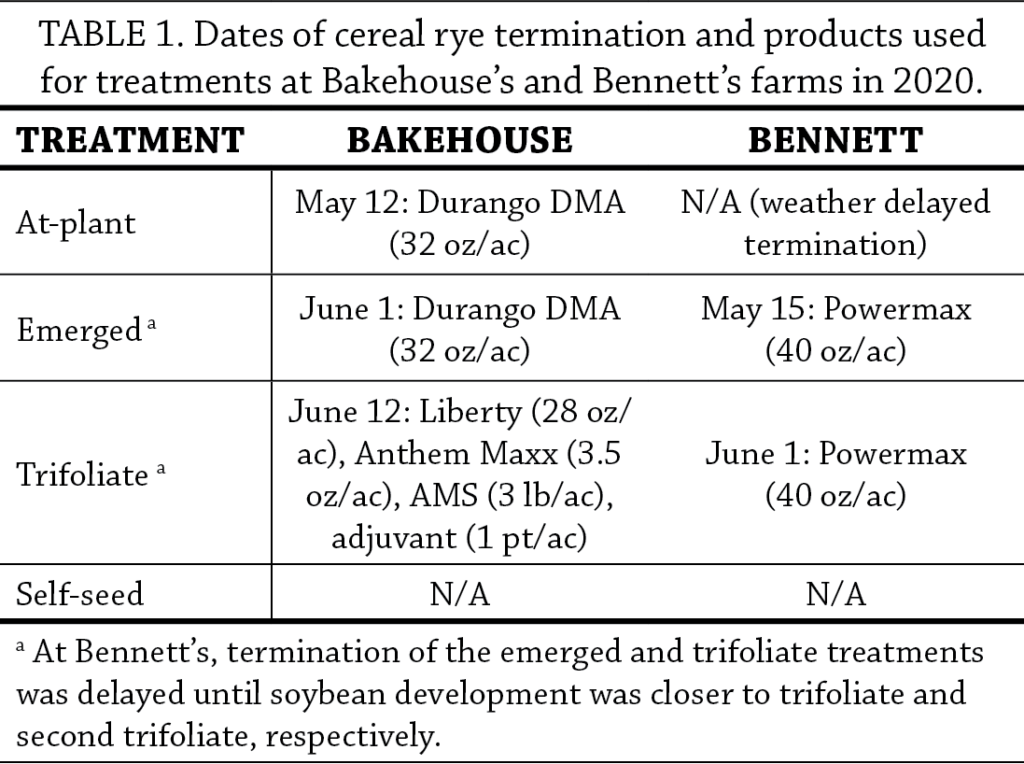 Weed control at Bennett’s consisted of a tank-mix of Prowl 3.3 EC (3 pt/ac) and Salvo (12 oz/ac) applied to all strips on April 12 (15 days before planting soybeans). Three days after planting soybeans, Bennett applied Authority MTZ at a rate of 10 oz/ac.

Bakehouse observed “lots of little pigweed” in the at-plant strips by June 12 and applied a tank mix of Liberty (28 oz/ac), Anthem Maxx (3.5 oz/ac), AMS (3 lb/ac) and adjuvant the same day only to the at-plant strips. On July 25, heavy weed pressure in the other treatments necessitated a rescue application of Liberty (28 oz/ac), Anthem Maxx (3.5 oz/ac), Zaar (1 pt/ac) and AMS (3 lb/ac) to one strip of the trifoliate treatment, three strips of the self-seed treatment and all four strips of the emerged treatment. Bakehouse commented, “I do not think the rescue spray in the self-seed treatment affected the rye in those strips. It didn’t kill the weeds that were very large at that point, and I don’t think it was able to reach weeds below the canopy.”

Bakehouse and Bennett sampled cereal rye biomass on the same date the rye was terminated in all but Bakehouse’s self-seed treatment strips and Bennett’s at-plant treatment strips (Table 2). They sampled biomass by cutting aboveground rye biomass from within quadrats of a specified area and collecting it into paper bags. After allowing the biomass to dry, the cooperators weighed each of the samples and determined the amount of rye biomass (lb/ac) in each treatment at the time of termination.

Soybean stand counts were carried out at Bakehouse’s on Sept. 2 and at Bennett’s on Sept. 24 (Table 2).

Bakehouse and Bennett, respectively, harvested soybeans on Oct. 5 and Sept. 24 (Table 2). Yields and percent moisture were recorded for each strip, and yields were adjusted to standard moisture (13%).

Following soybean harvest in fall 2020, each cooperator additionally measured the percentage of groundcover generated from seed that dropped earlier in the season from the unterminated cereal rye in the self-seed treatment strips. To measure percent groundcover, Bakehouse and Bennett counted the number of green cereal rye plants at 32 fixed points along a 16-ft distance in each self-seed strip. Bakehouse and Bennett measured groundcover on Oct. 16 and Nov. 3, respectively. 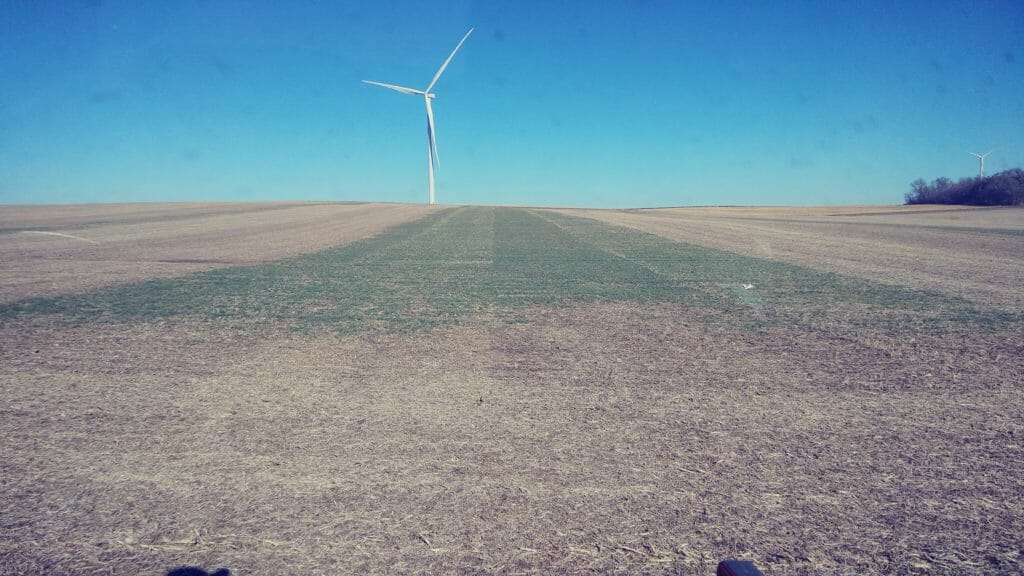 Cereal rye (green) in Bennett’s self-seed treatment strips grew from seed dropped by the rye cover crop that was planted the previous fall (2019) and left to grow without being terminated. Photo taken Nov. 3, 2020.

To evaluate effects of delayed termination on cover crop biomass, weed pressure, soybean stand count and yield, we calculated treatment averages for each measurement then used Tukey’s tests to compute least significant differences (LSDs) at the 95% confidence level. The difference between each treatment’s average of a given measurement is compared with the LSD. Differences greater than or equal to the LSD indicate the presence of a statistically significant treatment effect, meaning one treatment outperformed the other and the cooperators can expect the same results to occur 95 out of 100 times under the same conditions. A difference that is less than the LSD indicates the difference is not statistically significant and the treatment had no effect.

Heavy rainfall at the time of planting soybeans prevented Bennett from sampling and terminating rye biomass in his at-plant treatment strips, but he did sample biomass of the self-seeded rye (Figure A2). The self-seeded rye generated more biomass (sampled Aug. 15, 2020), than either the trifoliate (June 1) or emerged (May 15) treatments had at the time of their termination (Table 3). Additionally, the trifoliate treatment generated more biomass than the emerged treatment. 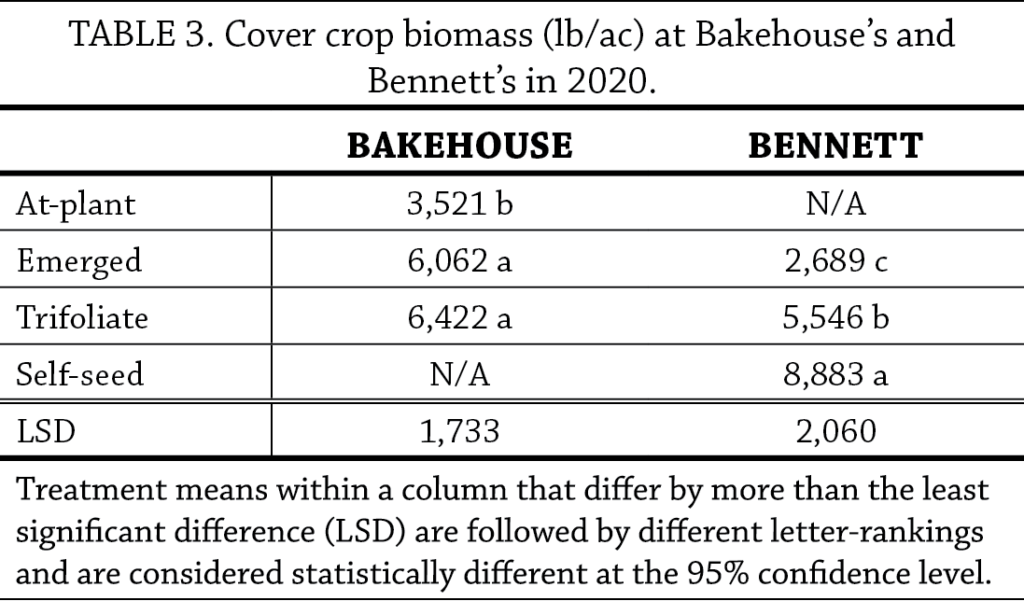 Delaying rye termination as well as not terminating rye (self-seed) did not reduce soybean stand counts at either cooperator’s farm (Table 4). 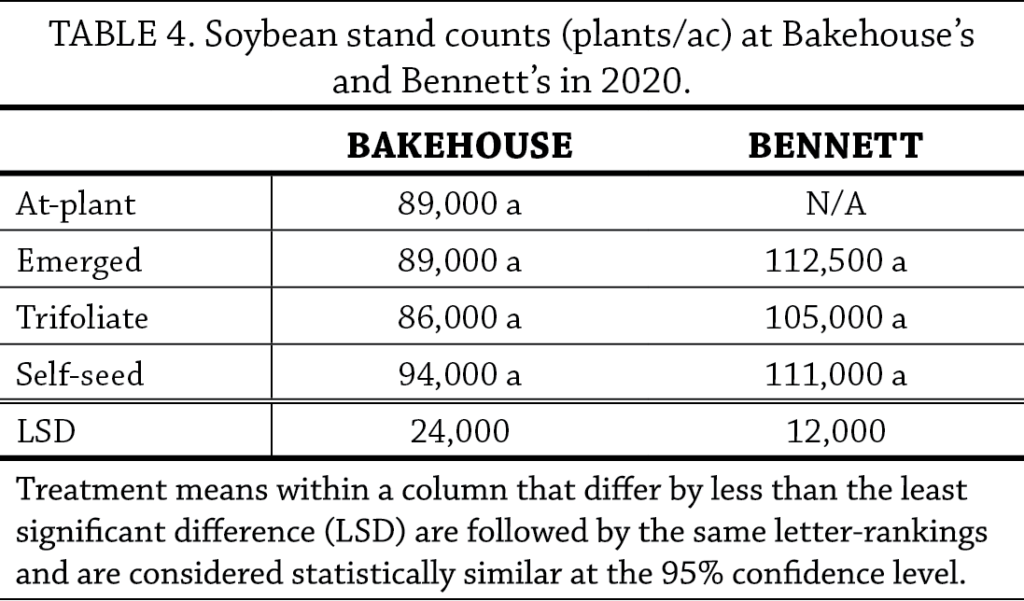 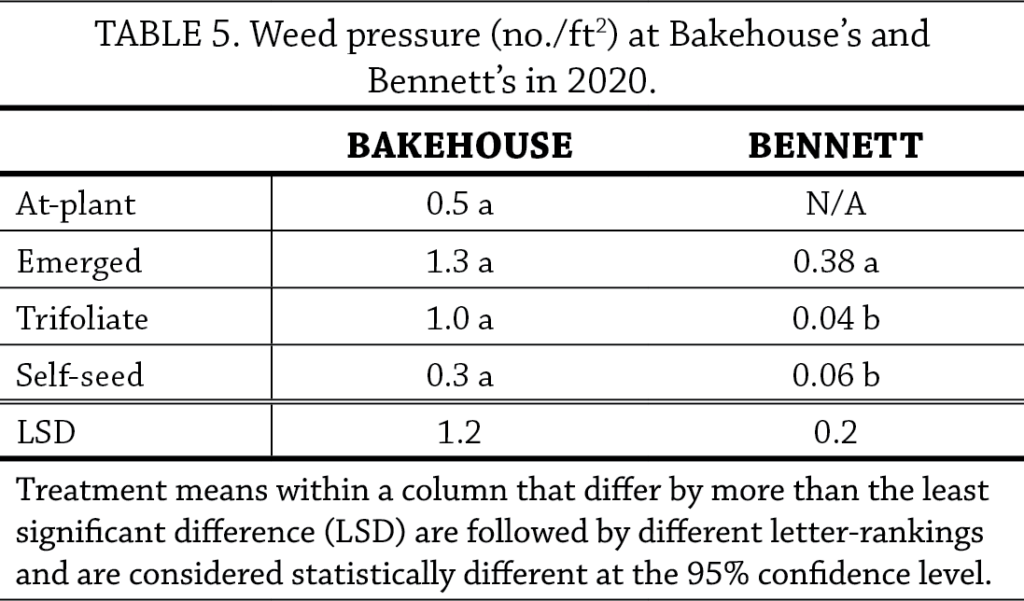 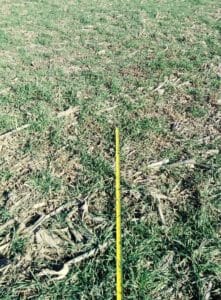 Bakehouse and Bennett measured 31% and 76% groundcover, respectively, in their self-seed treatments.

Yield in Bakehouse’s at-plant treatment was greater than yield in all three other treatments (Figure 1). With respect to cover crop termination date, the earliest termination (at-plant) produced the greatest yield and the later treatments (emerged, trifoliate) produced lesser yields (Table 3).

At Bennett’s, yield in the emerged treatment was greater than yield in the trifoliate and self-seed treatments, and yield in the trifoliate treatment was greater than in the self-seed treatment (Figure 1). Just as with Bakehouse’s results, Bennett’s yield data showed that as rye termination date is delayed, soybean yields decrease (Table 3). Bennett’s yield data are additionally made more interesting by the fact that weed pressure was greater in the treatment where soybean yield was greatest (emerged) while lower weed pressure in the trifoliate and self-seed treatments corresponded with lower yields (Table 5). For Bennett, while the increasing gains in rye biomass that occur with each successive termination date reduce weed pressure, more rye biomass (resulting from delaying termination) also has the effect of reducing soybean yield, likely due to competition from the rye.

FIGURE 1. Soybean yields at Jon Bakehouse’s and Sam Bennett’s. Columns represent yields for each individual strip. The average yield of a given treatment is indicated above each group of columns. If the difference between two averages is greater than or equal to the least significant difference, the treatments’ yields are considered statistically different at the 95% confidence level.

Two years of this on-farm research have shown that it is possible to delay rye termination up to 27 DAP without sacrificing soybean yield but that careful management under drought conditions is critical in order to avoid soybean yield loss.[4] At the conclusion of this trial Bennett commented, “It was hard to predict that drought would affect the results by as much as they did. I can’t help but wonder how the soybean yields would have been affected if we harvested the rye over top of the beans, or if the rye would have laid down flatter if we had more rain to help break it down through the season” (Figure A2).

In the end, both Bakehouse and Bennett were happy to have conducted the trial. “Any trial that helps me to get the most benefit out of my cover crops is worthwhile. While the yields and results weren’t what we were hoping for, we learned a lot about the boundaries of managing the cover for a specific purpose,” Bennett remarked. Bakehouse added, “The second year of this trial really started to hone in on specific questions that can’t necessarily be answered in one year, especially when compared with data from years prior.”

FIGURE A1. Sample experimental design used by Bakehouse and Bennett. The design consists of four replications of each treatment (16 strips total) and allows for statistical analysis of the data. 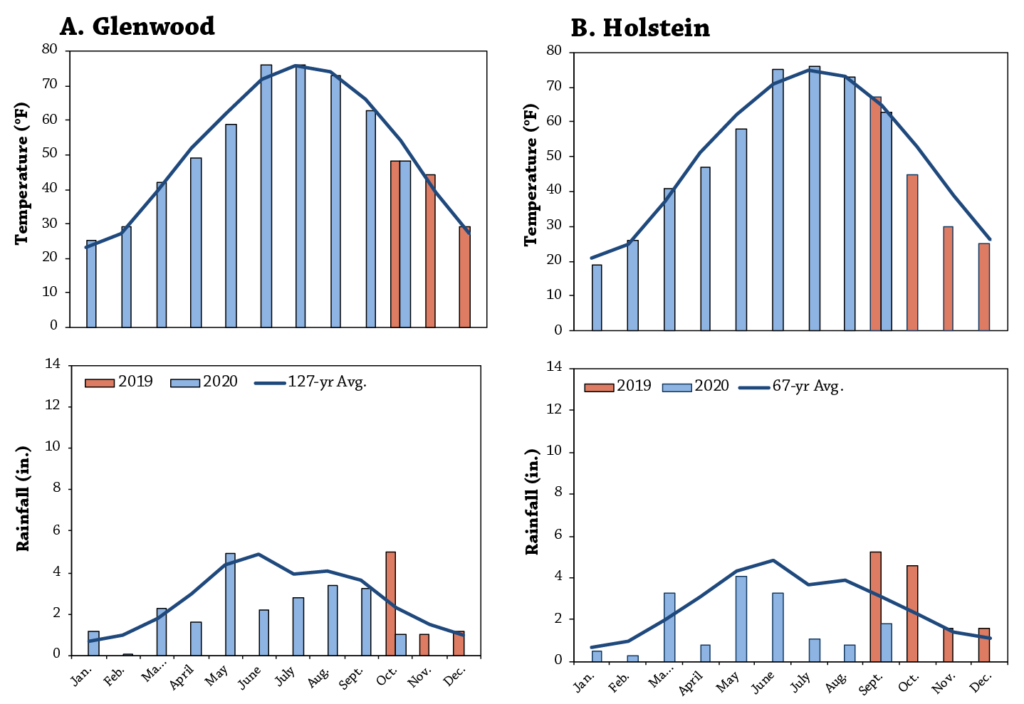 FIGURE A2. Mean monthly temperature and rainfall during the trial period and the long-term averages at the nearest weather stations to each farm.[5] A) Glenwood (Jon Bakehouse, about 14 miles away), B) Holstein (Sam Bennett, about).