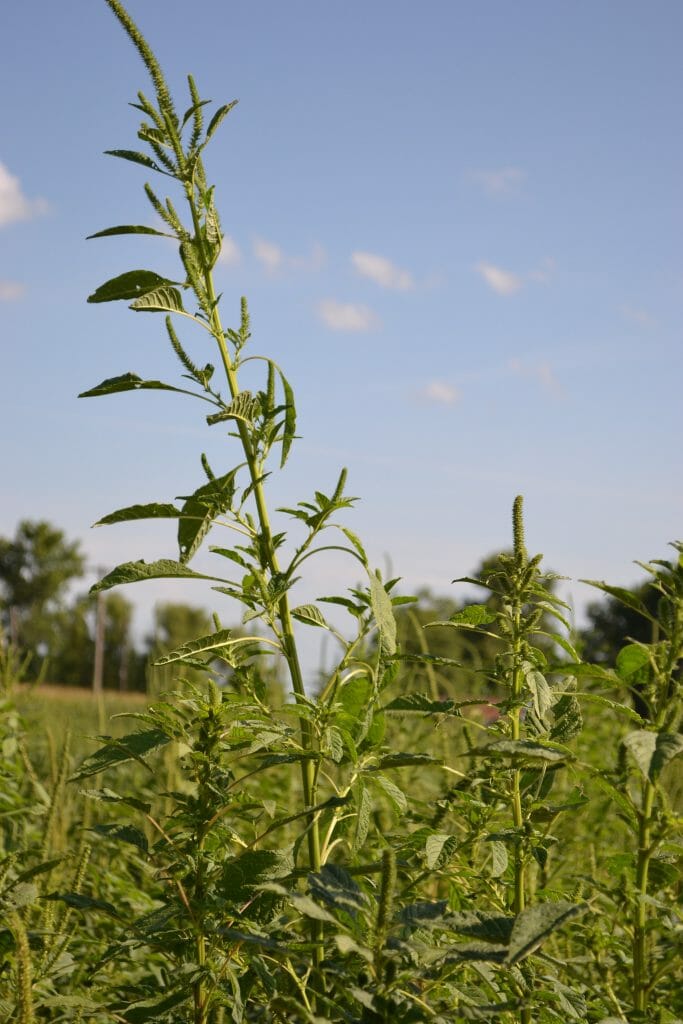 Waterhemp towers over a crop field. In just over 20 years, this Midwestern native has evolved resistance to several different herbicide groups. (Photo courtesy of the United Soybean Board)

In the world of herbicide-resistant weeds, waterhemp is surpassed by none. Once little more than a nuisance to farmers, this native broadleaf rapidly gained superweed status during the 1990s and 2000s.

While the degree of resistance varies from farm to farm, stacked resistance – where a weed is resistant to multiple herbicide groups – is increasingly common. Farmers all over the Midwest have been trying to confront the waterhemp challenge for years, but are struggling to gain the upper hand. While managing such a resilient weed is clearly not easy, understanding how waterhemp has managed to thrive in modern crop systems – as well as its weaknesses – can help farmers to better control this trying weed. 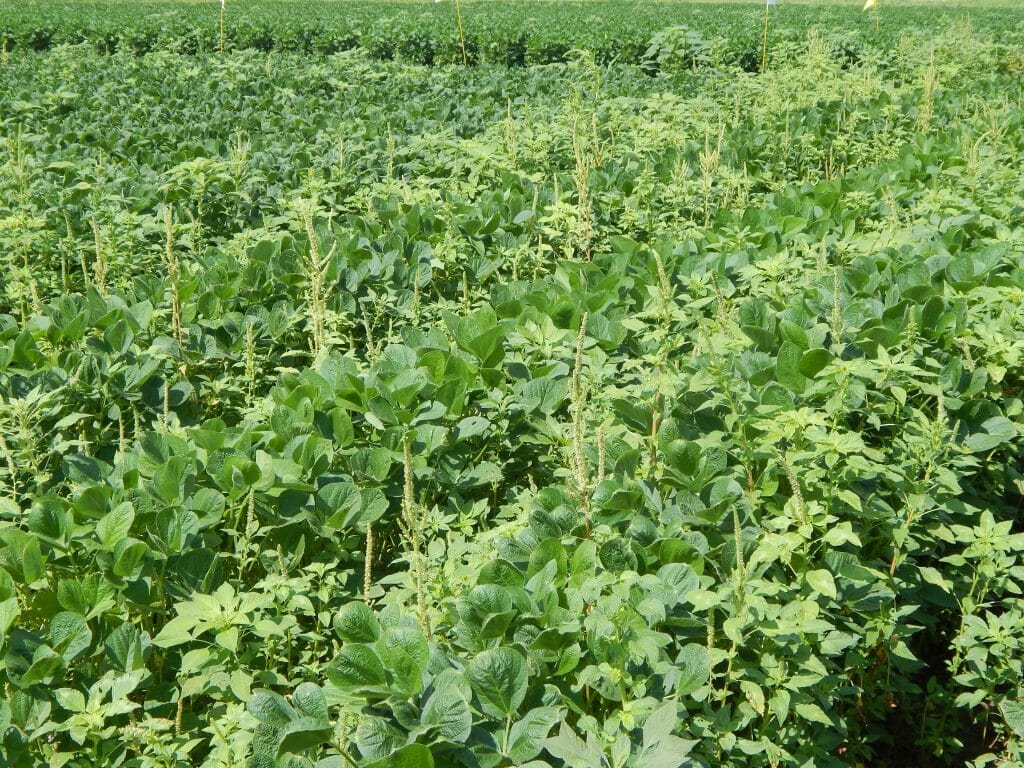 A soybean field infested with waterhemp can significantly reduce soybean yields. (Photo courtesy of the United Soybean Board)

Waterhemp is a species of amaranth that grows rapidly, produces many seeds and has proved to be highly adaptable to modern agricultural practices that rely on chemical weed control and reduced tillage. Its ability to rapidly evolve herbicide resistance means it has the potential to be highly detrimental to corn and soybean yields if not controlled. In soybeans, Purdue University Extension has found that 20 waterhemp plants per square foot can reduce yield by 44 percent. In corn, Purdue researchers have found that a heavy waterhemp infestation early in the season can reduce yields by 15 percent.

To minimize the economic impact of this potent weed, farmers have turned to a variety of expensive chemical cocktails. As waterhemp has developed resistance to new herbicide products, however, the chemical approach to control is becoming costlier, more complex and less effective. One tool to fight waterhemp that deserves a second look is cover crops. 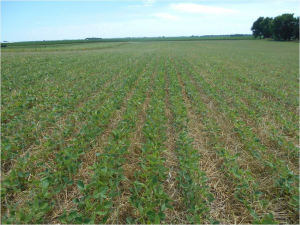 Soybeans growing in a field of terminated rye.

“I can absolutely see a noticeable difference in my fields,” he says. “It is fairly easy to see rye dominating the winter annuals, such as marestail and pennycress, in the field. Summer annuals are always harder to fight, but cover crops do make a difference.”

Dennis isn’t just using the rye cover crop for weed control, but as an integral part of restoring the health of his soils – something he sees as foundational to crop health and coping with agronomic challenges like weeds. “Weed control is not my primary reason for adopting cover crops,” he says. “Having said that, weed control has also evolved into a rather critical issue and dilemma. The evolution of resistant biotypes has gotten the attention of farmers and researchers alike.” Dennis sees healthy soil and the complex biological networks within it as key to weed control beyond herbicides. “There are symbiotic relationships in healthy soils that we are only beginning to understand and make good use of with regard to protecting plants from pests, including weeds.”

Winter annual weeds germinate in the fall and winter and then take off early in the spring. Overwintering cover crops also germinate in the fall and winter and have a similar life cycle, which is why they are so effective at smothering these winter annuals. Summer annuals like waterhemp, by contrast, germinate around June and grow through the height of summer. By this time, most farmers have already terminated their cover crop – but they can still take advantage of the resulting biomass to control summer annuals. As Dennis has found, the trick is to manage cover crops so they can suppress weeds both while they’re growing and after they have been terminated and start breaking down. When thinking of planting a cover crop, it’s important to know the goals for your land and what you want to accomplish with the cover crop. In the case of waterhemp, the goal is weed control. That means choosing a cover that can produce a lot of biomass in June to choke out waterhemp germination and early growth. 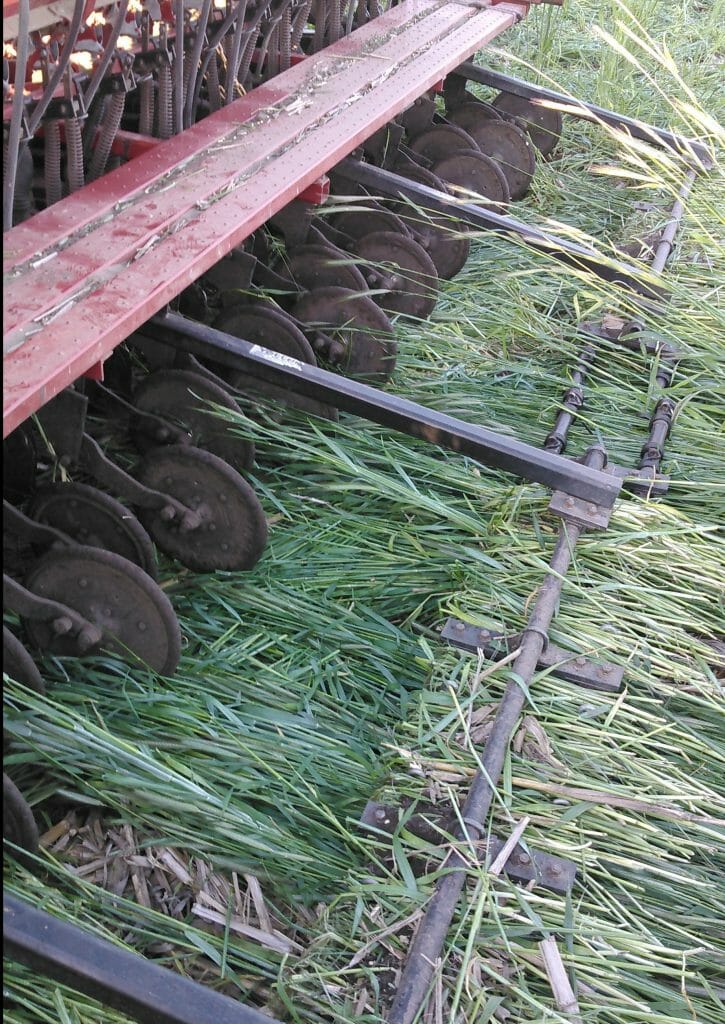 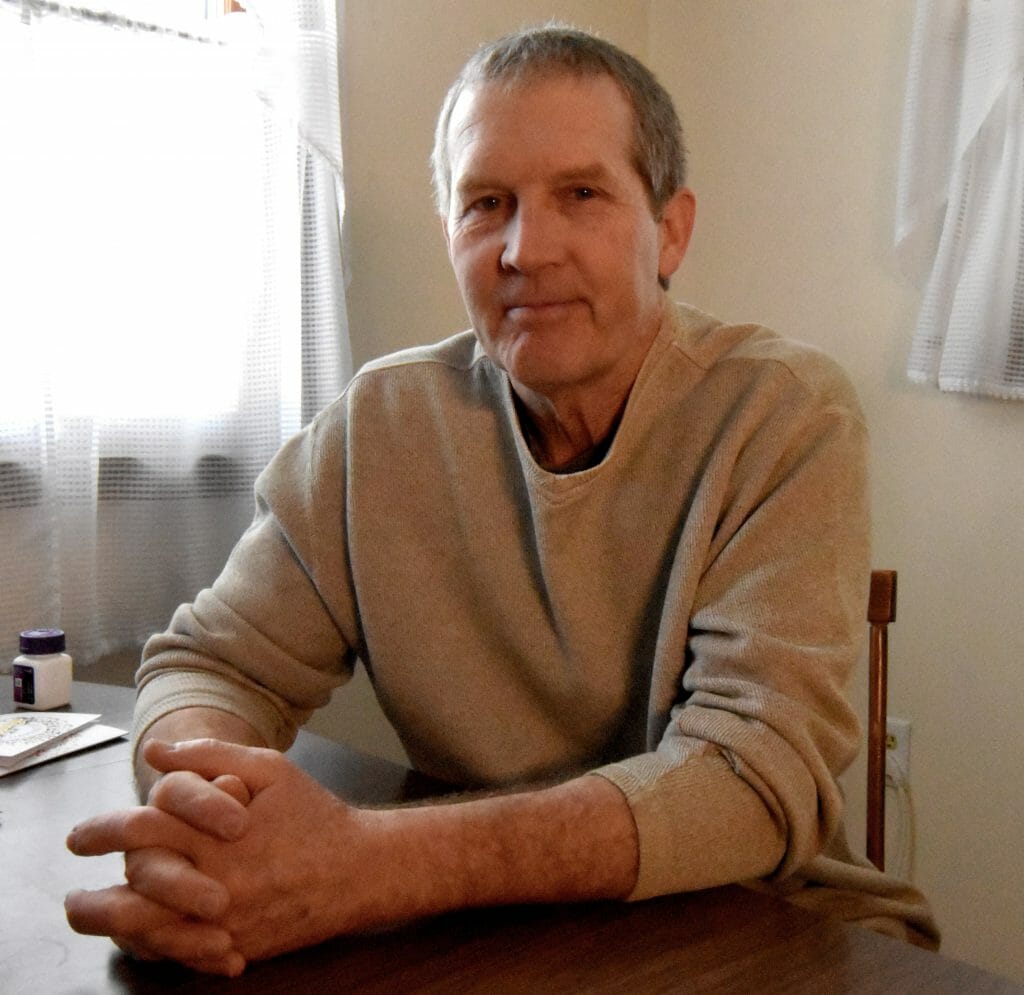 Cereal rye meets these criteria, and is a low-risk and popular cover crop for Iowa. “Rye is kind of the king of cover crops,” Dennis says. “It’s out there [in Iowa] everywhere, and for good reason. It overwinters really well and provides what the soil needs.” Because rye also provides the most spring biomass of the cover crop options, it has the best shot at controlling summer annual weeds. As a bonus, it can live through the winter and pull double-duty helping to suppress winter annuals too.

The next step is actually getting the cover crop planted. There are pros and cons to both aerial seeding and drilling, so the approach you choose depends on what’s available and which works best for you and your land. Drilling the cover produces a more even stand, while aerial seeding can leave gaps in coverage that opportunistic weeds can exploit. On the flip side, however, farmers can aerial-seed into standing corn and soybeans, while they have to wait to drill until after harvest. The ability to get rye planted sooner gives rye more of a growing window in the fall, and leads to more biomass production in the spring. Dennis prefers aerial application for this reason. “I’m able to get the cover in earlier, which provides more root growth and biomass in the spring,” he says. Both options have merits and can provide a good stand to last you through the spring – and more importantly, into the summer. 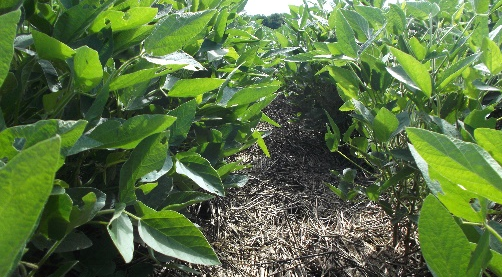 In the spring when it’s time to kill the cereal rye, farmers conducting research through PFI’s Cooperators’ Program have found that waiting to terminate results in the most biomass – and biomass is the key to suppressing summer annual weeds like waterhemp. With corn, there’s less leeway, since the general recommendation is to terminate the cover crop 10-14 days before planting. Soybeans are more forgiving, however: You can kill the cereal rye before or shortly after planting soybeans with no yield risk. This flexibility allows for a longer growth period and can make a big difference when controlling weeds.

Jack Boyer, who farms near Reinbeck in Grundy County, can vouch for the benefits of waiting to terminate his rye. For the past few years, he has conducted research on his farm looking at different cover crop termination dates ahead of soybeans. In 2015, Jack waited until the day after seeding soybeans (May 19 that year) to terminate his rye. He found no yield drop – and he got nearly 8,000 pounds of dry matter per acre in those research strips. While he was pleased with these results, the research yielded an unexpected discovery. “The most interesting part of the trial was the improved control of waterhemp in the cover crop areas versus the no-cover areas,” Jack says.

The quantity of biomass Jack saw that year is more than enough to suppress any type of weed, according to PFI member Andrea Basche, an agronomy professor at University of Nebraska Lincoln. Andrea recently completed a study that looked at the amount of biomass growth needed for weed control in a continuous corn system. She found that just 3,300-3,600 pounds of rye biomass per acre reduced both weed density and weed biomass by more than 90 percent. The cover crops in her study were planted from mid-September to mid-October and were terminated with herbicides in mid-April. In 2017, Andrea conducted a meta-analysis looking at the impacts of continuous living cover on soil hydrology. In the published research, she observed: “Across the Corn Belt, experiments show that cover crops are generally more effective at reducing weed biomass compared to weed density. This suggests that cover crops may be more beneficial from the standpoint of controlling the size of weeds, and therefore the efficacy of an herbicide program.”

Combining cover crops and herbicides can be an effective strategy against aggressive weeds like waterhemp. When using herbicides, many farmers start with a pre-emergent, soil-residual herbicide. These herbicides remain active in the soil for an extended time and are able to act on weeds that may germinate after application. This is especially important when fighting summer annuals in a field with heavy cover crop biomass. With soil-residual herbicides, the chemistry remains effective against the targeted weeds at the soil level instead of getting caught up on the cover crop biomass. When planning to terminate their cover crop later, many farmers opt to mix their pre-emergent with the herbicide they’ve chosen to kill their cover crop, applying both at the same time.

Dennis cautions that it’s important to do you research if you plan to add a pre-emergent herbicide. “Products like atrazine and Sharpen can have a neutralizing effect on glyphosate,” he says, citing research by the late Mike Plummer, who worked as an agronomist with University of Illinois Extension and conducted extensive cover crop research. “Crop oil concentrate or too much UAN can burn the rye before it has a chance to translocate properly.”

An effective post-emergent herbicide can also help to manage waterhemp and other challenging weeds. To minimize the risk of encouraging herbicide-resistant weeds, weed experts recommend following best practices such as varying your mode of action from year to year when selecting herbicides. Some farmers also opt to avoid herbicides completely when terminating their cover crop. A roller-crimper, for instance, effectively breaks the stalks to kill the cover crop and lays it flat on the ground. To learn more, read the 2017 PFI research report “Rolling Cover Crops and Soybean Row-Width.” Scott Shriver, of Jefferson, participated in this research, which explored soybean planting dates compared to the date of a roller-crimped cover crop.

In the era of herbicide-resistant weeds, cover crops represent a new way to manage problematic weeds like waterhemp. But other techniques – like increasing the cash crop seeding rate and planting narrower rows – can be used along with cover crops to provide even better weed suppression. “My wide 38-inch rows don’t help matters,” Dennis says, referring to weed control. Decreasing row width reduces the amount of land and nutrients weeds have to grow, creating an effective weed management tool. Similarly, a higher cash crop seeding rate creates a thicker stand that leaves less room for weeds to take hold.

Over time, these simple practices can make a big impact in the fight against waterhemp. They can also be used to suppress other problematic weeds, such as Palmer amaranth, a more aggressive relative of waterhemp that was first confirmed in Iowa in 2013 and is now believed to be present in all 99 counties. Although still less prevalent in the Midwest than waterhemp, Palmer amaranth is bigger and more competitive than waterhemp, and has the potential to significantly affect crop yields.

The best way to manage any weed is to understand what it is and where it’s coming from. Patience and active weed monitoring are also key. “Changing weed pressure takes time,” Dennis says. “I still add a pre-emerge to the burndown and then see what happens. I, too, am looking for something other than Group 14 or Group 15 herbicides to rely on.” In the meantime, Dennis is working toward his goal of using cover crops as part of his weed control strategy while improving the health of his soil.

Since the challenge of managing herbicide-resistant weeds will only increase, reducing a weed’s ability to survive by planting cover crops and coupling that with other techniques can offer a multifaceted approach to confronting this complex problem. This strategy can not only help break the cycle of resistance, it can give you more control over a reality that’s here to stay.