“My goal with cover crops is to balance soil health and maximize crop production;” Steve Berger began his talk on cover crops for our March “shared learning call.” Steve farms near Wellman, IA and joined us on March 16 to share his practices for successfully managing a cereal rye cover crop on every acre of his corn and soybean ground. His talk covered his fertility plan, terminating cover crops and planting the main crop. 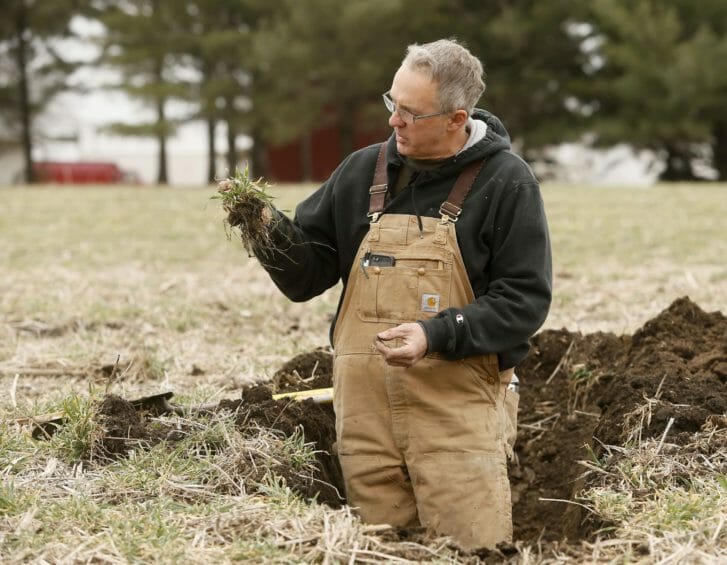 Steve Berger inspects the rooting depth of cereal rye planted in one of his fields. Photo: Cliff Jette, The Gazette

Steve plants rye in 10” rows using a crustbuster drill immediately after harvest – which can go up to or past the second week of November. Then Steve implements his fertility program, which he describes as “spoon feeding my nitrogen.” After temperatures drop in the fall he will apply swine manure, dribbled onto the soil surface. Then in early spring he takes soil tests to measure available nitrogen (N). In most years this leads to broadcasting ammonium sulfate in two separate passes with 30 lbs of N per acre in each pass for a total of 60 lbs of N applied before the corn planter hits the field. Or this nitrogen is applied as manure. This sets the stage for a successful corn crop after a cereal rye cover.

The next step is to terminate the rye. Before corn, Steve began to terminate rye around April 1st if weather conditions allowed, but has since pushed that date later. “The first time we got forced into delayed termination, but found out from that experience that it works quite well.” So this year his goal is to terminate only 3-4 days before corn planting. “Last year I had rye 27-28 inches tall when I sprayed it. But the later and taller you let that rye grow it can make a mat and be hard to plant through once you spray it down.” Every year is different with the weather and cover crop growth, so keeping an eye on conditions is critical to good management.

While rye is routinely terminated before corn planting, “in soybeans we’ll let that rye continue to grow for another couple of weeks. Rye was 4 to 6 ft, maybe even 7 feet in some of those fields last year.” The sheer volume of rye in the field encouraged Steve to try roller crimping the rye, a common termination technique in organic systems, but still comparatively rare with conventional growers. “We thought it wouldn’t deal well with chemical termination because it was so big, so we got a roller crimper and it worked really great. Our biggest issue was making sure the pollen from the rye didn’t plug up the grill!” For chemical termination before either corn or soybeans are planted, Steve uses glyphosate or grammoxone. 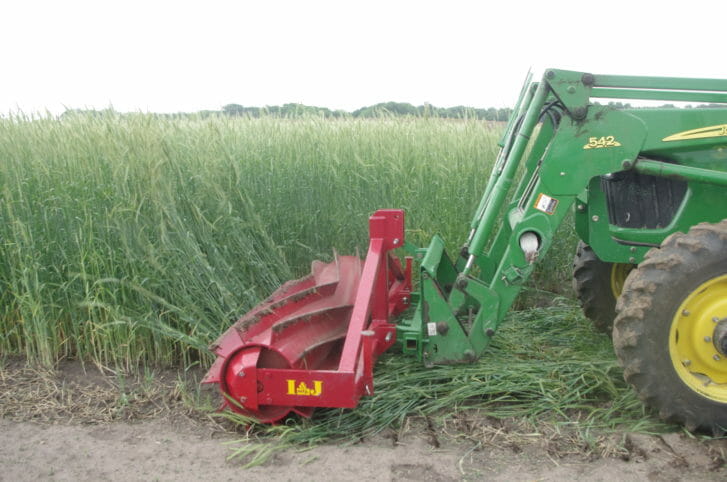 Then it’s time to plant. “It’s one of the most important trips we’ll make all year,” Steve says. “It really matters how that corn planter is set up. When I talk to farmers that have had bad experiences with cover crops and no-till it comes back to that planter.” To start with the basics planting success depends on:

And Steve reminds us, this is a long term investment. “The longer you’ve no-tilled and used cover crops, the higher your aggregate stability will be and it will be easier to get that trench closed. If you’re doing your first year of cover crops you may not have this same experience as someone who has been doing it longer.” But, there are planter adjustments that you can make now to increase your success. 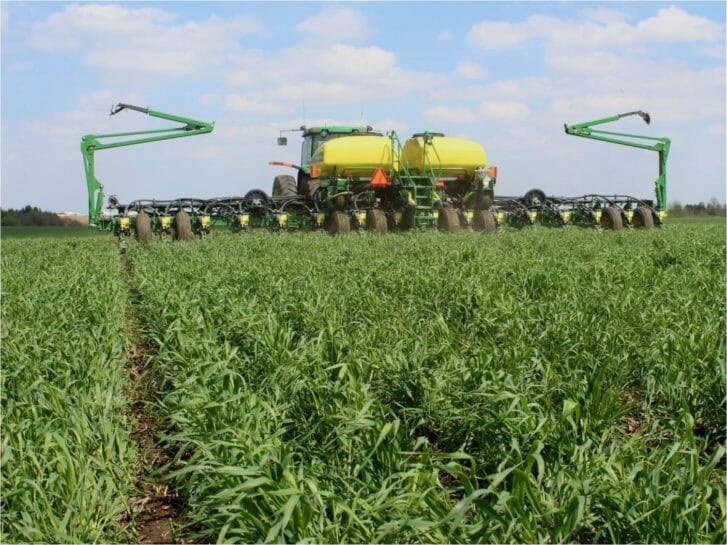 First, Steve suggests going to a sale and picking up base mount row cleaners. “We want to move the residue and not the soil – so make sure it’s set high enough that it’s not moving dirt,” Steve says. “If you’re planting in tall rye, the green rye will part for the planter, so you don’t need the row cleaners.”

Next, for planting corn, getting nitrogen on the planter is important. “We’re set up to apply 32% nitrogen with a Y band on our closing wheels,” Steve says. “We used to have a John Deere opener at over 2 and down 2 that worked fine, but we pulled that opener off to get rid of the weight and wear and went to the Y band with a light hose.” Steve applies 60-80 lbs of N on his planter.

Pay attention to seed depth – 1 ¾” is the traditional target for corn. Make sure that you’re hitting that target with any additional depth of cover crop residue sitting on top of the ground. To get a nice clean “V” seed trench, Steve uses reduced inner diameter tires, but he keeps the regular ones around. Steve also uses DeltaForce hydraulics to control down pressure and resulting seed depth. “It’s not a cheap option, but we think it’s a good investment to get the seed where it needs to be,” Steve says. “We can look at the Ipad and see that we didn’t have enough down pressure.” 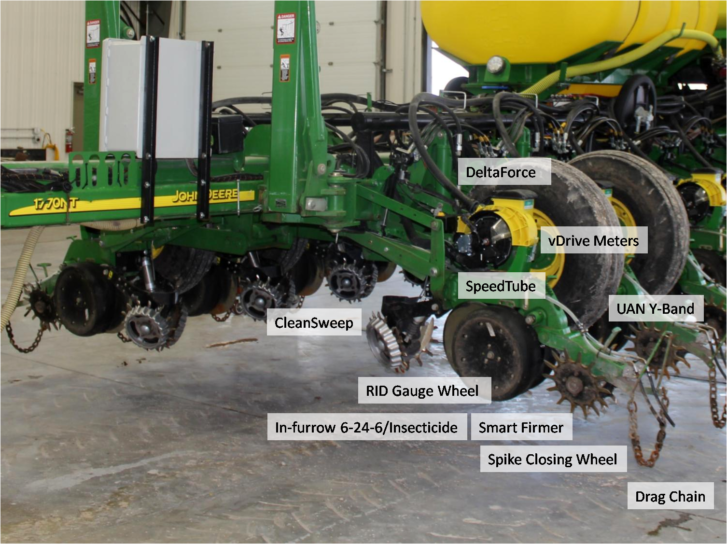 On planter set up Steve offers this perspective: “This row unit is one of the most important pieces of capital we have on the farm. We will tend to use innovations and budget more for upgrading the planter because it is so critical.”

If you are thinking of planting cover crops this year and you sell soybeans to ADM or corn to the Cargill plant in Eddyville, you are eligible for cover crop cost share on 160 acres or 10% of your farm, whichever is larger. Learn more about the ADM program and the Cargill program by following these links to the program flyers or by calling our office at 515-232-5661 and speaking with Richard.