This project is supported in part by the Iowa Department of Agriculture and Land Stewardship, Division of Soil Conservation and Water Quality.

Benefits of cover crops can include improved weed control, reduced herbicide inputs, increased water infiltration and improvement of soil health and water quality.[1–3] Adequate cover crop growth is needed to maximize these benefits, but the window of time for such growth is limited by federal crop insurance rules. When asked about his motivation to conduct this trial, Sam Bennett replied, “To contribute to a dataset that shows that planting soybeans into living rye and terminating that rye up to a month after planting will have no effect on soybean yield and will benefit weed control. I’d like to see RMA [USDA Risk Management Agency] remove the restrictions on cover crop termination dates as they apply to soybean crop insurance eligibility.”

Current guidelines determined by the Natural Resources Conservation Service and the Risk Management Agency require cover crops to be terminated on or before the date of planting soybeans at Sam Bennett’s and Jon Bakehouse’s farms (western Iowa) and before soybean emergence at Tim Sieren’s farm (southeast Iowa).[4] Bennett, Sieren and Bakehouse wanted to determine if they can increase rye biomass and improve weed control by prolonging cover crop growth until after soybean emergence without reducing soybean yield. To determine the effect of prolonging cover crop growth beyond soybean emergence, each grower compared cereal rye biomass, soybean stand count and soybean yield of strips where cereal rye was terminated near the date of planting soybean (near-plant termination) and strips where cereal rye was terminated between 16 and 52 days after planting soybean (delayed termination).

In the fall of 2018, Bennett, Sieren and Bakehouse drilled cereal rye (var. Elbon) after corn at a planting population of 1 million pure live seed per acre (PLS/ac). The subsequent spring, they planted soybeans and established treatment strips by terminating rye on two different dates at their site. Treatments were arranged in a randomized complete block design and randomly assigned to one strip per block (Figure A1). Blocks were replicated four times for a total of 8 strips at each farm. 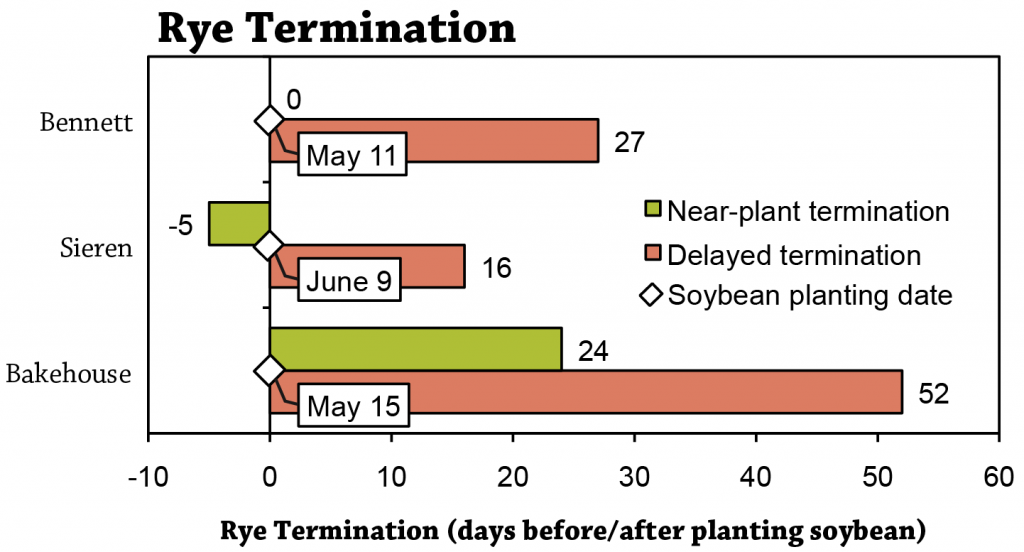 FIGURE 1. Termination of rye measured in the number of days before or after planting soybeans for both treatments at each farm. Day 0 on the horizontal axis represents the day soybeans were planted at each farm.

Bennett drilled cereal rye on Oct. 20, 2018, in 8-in. rows at 52 lb/ac. On May 11, 2019, Bennett planted soybeans in 15-in. rows at a population of 140,000 seeds/ac. To establish treatments, Bennett chemically terminated his near-plant termination strips the same date of planting soybeans using glyphosate (32 oz/ac). Bennett terminated rye with glyphosate (32 oz/ac) in his delayed termination strips on June 7, 27 days after planting soybean (Figure 1). Sam’s strips measured 350 ft long by 60 ft wide. For weed control, Bennett applied Prowl H2O and Authority MTZ to all treatment strips on May 14.

Sieren used a 7.5-in. drill to drill cereal rye on Oct. 30, 2018, at a rate of 55 lb/ac. He planted soybeans on June 9, 2019, in 7.5-in. rows and at a population of 155,000 seeds/ac. Five days prior to planting soybeans (Figure 1), on June 4, Sieren established his near-plant termination strips by terminating rye with a mix of glyphosate (32 oz/ac), Anthem Maxx (4 oz/ac), Tricor 75 DF (5 oz/ac) and AMS (2.5 lb/ac). Sieren terminated rye in his delayed termination strips on June 25, 16 days after planting soybeans, but excluded Tricor 75 DF from the herbicide mix. Five days prior to termination, Sieren observed the rye in his delayed-termination strips was already maturing and senescing with some weeds present. He thinks this burndown application may have served more as weed control than as a burndown. Sieren applied an herbicide mix of Interline (32 oz/ac) and AMS (2.55 lb/ac) to all strips on July 20 but noted the Interline was probably not necessary in the delayed-termination strips. Sieren’s strips measured 25 ft wide by 600 ft long.

Bakehouse drilled cereal rye in 8-in. rows and at a rate of 44 lb/ac on Sept. 18, 2018. Bakehouse periodically grazed the cover crop at a stocking rate of 56 AU between Oct. 29, 2018, and April 22, 2019. On May 15, Bakehouse planted soybeans in 15-in. rows at a population of 148,000 seeds/ac. Weather delayed rye termination longer in both treatments at Bakehouse’s compared to Bennett’s and Sieren’s. Bakehouse terminated rye on June 8 in the near-plant termination strips and on July 6 in the delayed termination strips – 24 days after planting soybean and 52 days after planting soybean, respectively (Figure 1). He used Durango (24 oz/ac) to terminate rye in both treatments but added Outlook (10 oz/ac) and AMS (3 lb/ac) to terminate the delayed termination strips. Bakehouse’s strips measured 30 ft wide by 1,197 ft long.

Bennett and Sieren, respectively, harvested soybeans on Oct. 9 and Oct. 16. Yields were recorded for each strip and adjusted to standard moisture. Yield data could not be reported for Bakehouse. 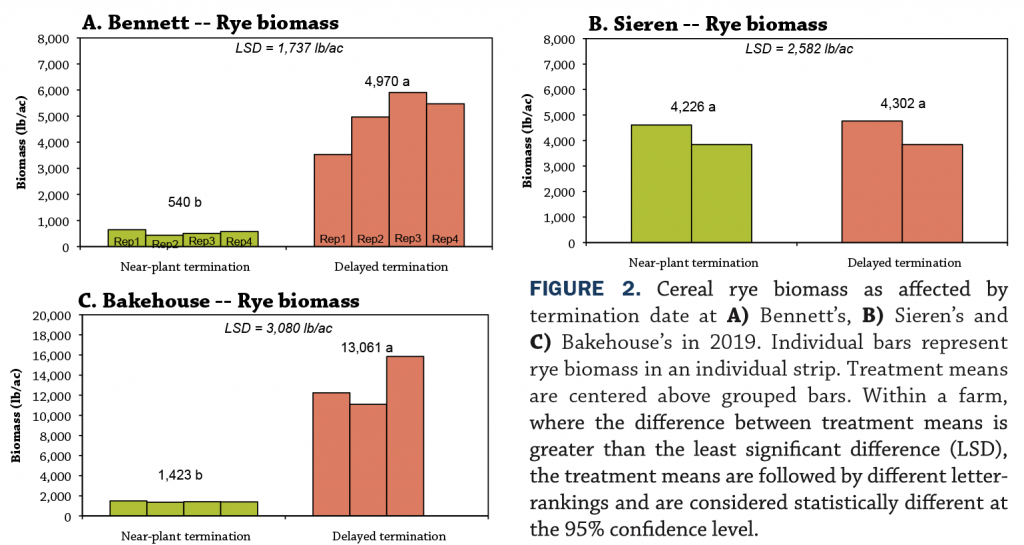 While Sieren’s data do not show a statistically significant difference in rye biomass, it is worth noting that biomass was numerically greater in his delayed termination strips. Analysis of Sieren’s biomass data required a more conservative approach than Bennett’s because information on the replicates from which samples were collected was not included with the samples. It is possible that including information on replicates could have resulted in a different conclusion for Sieren’s biomass data. 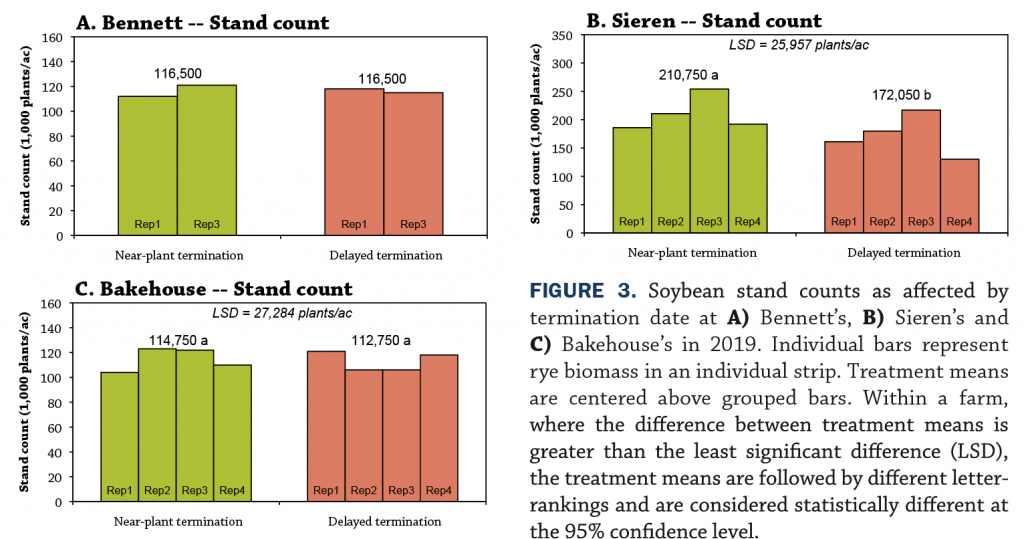 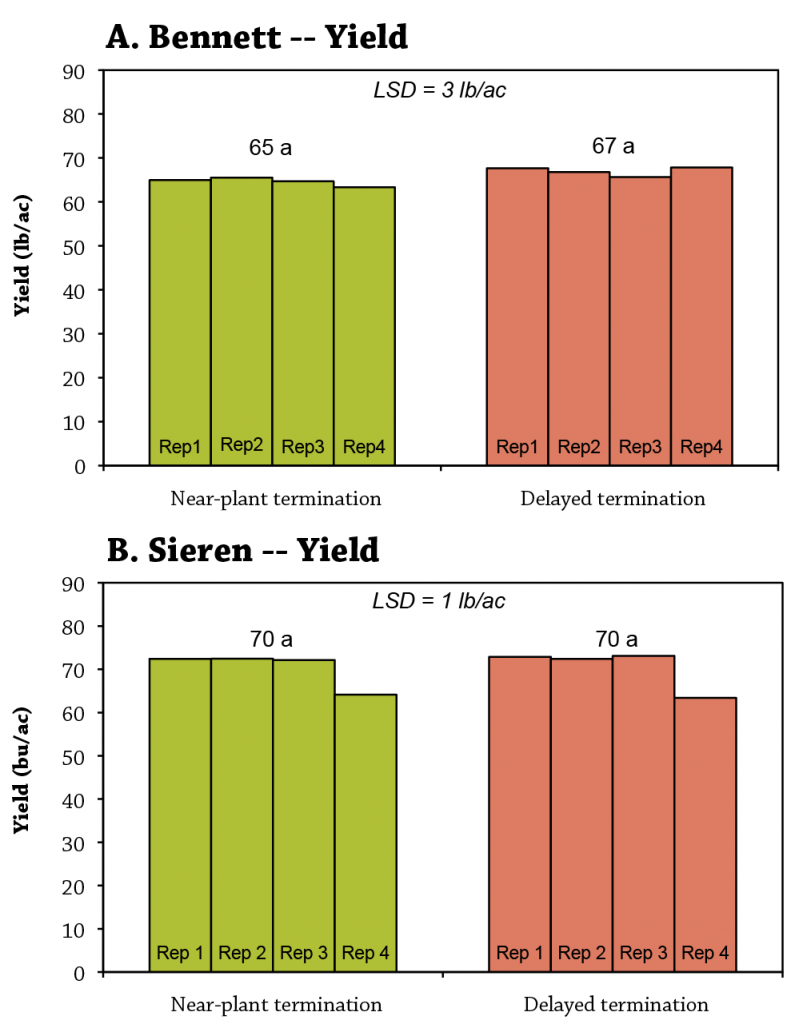 FIGURE 4. Soybean yields as affected by termination date at A) Bennett’s and B) Sieren’s in 2019. Individual bars represent rye biomass in an individual strip. Treatment means are centered above grouped bars. Within a farm, treatment means are considered statistically similar at the 95% confidence level if the difference between treatment means is equal to or less than the least significant difference (LSD). Means are followed by the same letter-ranking if they are statistically similar. 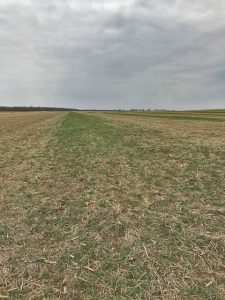 Cereal rye in Bakehouse’s delayed termination strips that “self-seeded” in 2019 and emerged the spring of 2020 following this trial. Photo taken March 31, 2020.

When asked if he plans to change any practices as a result of his participation in the trial, Sieren responded, “I plan to use more rye cover as a replacement for the first residual herbicide pass.” Even though delaying termination did not increase rye biomass at Sieren’s, he was able to use less herbicide in those strips without reducing soybean yield and also felt his July 20 herbicide pass in those strips was not necessary. Sieren commented, “I’ve been seeing weed control advantages in my use of covers in soybeans. Now I have numbers that prove it works – even in adverse conditions like those we experienced this growing season.”

Bennett also plans to continue the practice of delaying termination in soybeans. He stated, “I feel I’m gaining more benefits from the rye cover crop by delaying termination as long as possible.” When asked if he felt it was worthwhile to conduct the trial, Bennett responded, “This trial gave me confidence to delay rye termination until well after soybean emergence. I also hope to use this data in discussions with RMA about altering the cover crop termination guidelines under federal crop insurance rules.”

Bakehouse’s results are unique compared to Bennett’s and Sieren’s because rye in both of his treatments grew for longer periods after planting soybeans due to weather. While Bakehouse experienced greater rye biomass in his delayed termination treatment, it did not reduce soybean stand counts compared to the near-plant termination treatment. At the initial close of this trial, Bakehouse commented, “We will be more careful about letting cereal rye go too long before termination.” However, Bakehouse changed his tune recently after seeing cereal rye emerge this spring in the same locations where his delayed termination strips (terminated July 6) were in 2019. Rye in those treatment strips set and dropped seed. As an outcome of this trial, both Bakehouse and Bennett plan to investigate the effects of additional termination dates as well as the effect of not terminating the rye (letting the rye mature in the soybeans and re-seed itself).

FIGURE A1. Sample experimental design used by the cooperators. The design includes randomized replications of the near-plant and delayed termination treatments. This design allowed for statistical analysis of the data.

FIGURE A2. Mean monthly temperature and rainfall for Oct. 1, 2018 through Oct. 31, 2019 and the long-term averages at the nearest weather stations to each farm.[6] A) Holstein (Sam Bennett); B) Sigourney (Tim Sieren); C) Glenwood (Jon Bakehouse).