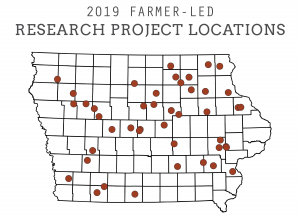 Practical Farmers’ Cooperators’ Program involves a community of curious and creative farmers taking a scientific approach to improving their farms. Farmers in the program conduct timely and relevant research to answer their most pressing farming questions. Knowledge generated from this farmer-led research is shared widely and helps inform farmers how to be more profitable, how to be better environmental stewards and ultimately, how to make their farms more resilient. Since 1987 when the Cooperators’ Program began, more than 240 cooperators have conducted 1,443 research trials on their farms.

Each year, cooperators gather in December to share results and observations from their trials. During this meeting, participants also brainstorm new ideas and make plans for future projects under the guidance of PFI staff. These projects often become collaborative efforts among several farmers. When it comes time for conducting the trials, farmers are ultimately the doers – they’re responsible for planting seeds, tending to animals and taking measurements throughout a trial. 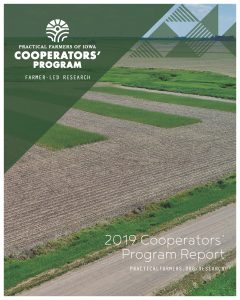 Valid and reliable farmer-generated information is a cornerstone of the Cooperators’ Program. Since the beginning, PFI cooperators have used methods that allow for statistical analysis of their results. Chief among these methods is replication (see figures on opposite page). The farming practices compared in an experimental trial are repeated (replicated) at least three or four times across the field. In the case of trials involving livestock, practices are often compared among two or more groups of animals in a herd or flock. Thus, trial results do not depend on a single comparison only, but on three or more. This approach lends a level of statistical reliability similar to scientific experiments conducted by university researchers.

Cooperators will tell you that conducting on-farm research with this amount of rigor involves a lot of time and effort. But they’ll also tell you how worthwhile the effort is for generating reliable, scientifically sound information. So, while PFI cooperators don’t have all the answers, they do have a tool for working towards those answers.

Field crop farmers are the largest membership contingency at Practical Farmers. Our field crops research focuses heavily on making cover crops and diverse rotations practical and profitable on cooperators’ farms. To do that, we conduct research on cover crop and small grains varieties, planting and fertilizer strategies, termination strategies and fitting these practices into farmers’ rotations.

Cover crops are known for their ability to prevent the loss of soil and nutrients from farm fields. But how do cover crops ultimately affect corn and soybean yields? In 2008 and 2009, 12 farms began a study to answer that question. Cooperators established and maintained multiple paired strips that ran the length of their fields – half of the strips received cover crops and the other strips were without cover crops. Each farm was in a corn-soybean rotation. Five farms conducted the study for 10 years (Funcke, Juchems, Stout, Tobin and Whiterock). Two cooperators (Stout and Tobin) completed their 10 years with soybean harvest in 2019. 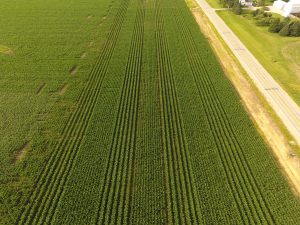 The earlier you seed a cover crop, the more you can expect that cover crop to grow and the more you stand to reap its many benefits. Doubling the width of the corn row from the contemporary 30-in. to 60-in. presents the opportunity to interseed a diverse array of cover crops in June and achieve upwards of 4,000 pounds per acre of biomass from those cover crops come corn harvest in the fall.

The wide corn rows allow ample sunlight to reach the cover crop. But how does widening the corn row ultimately affect corn yield? This was the second year of on-farm research trials designed to answer that question. 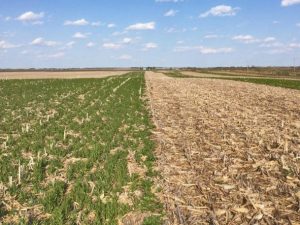 Andy Lenssen, professor of agronomy at Iowa State University, has recently been experimenting with camelina, a winter-hardy brassica species that has shown promise as a cover crop in experiments conducted on university research stations. In 2018, Andy offered the chance for PFI cooperators to try camelina as a cover crop on their farms. He provided the seed and the cooperators planted strips of camelina following corn or soybean harvest. 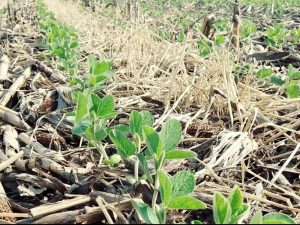 Sam hypothesized that as long as he had adequate cover crop growth in the spring, he could reduce herbicides without sacrificing weed control or soybean yield. “We’re always trying to answer the question of how to make covers pay for themselves,” Sam said. 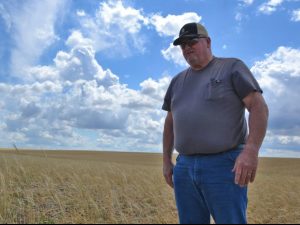 Jack Boyer has been planting a cereal rye cover crop in a corn-soybean rotation on his farm for over six years. Because Jack knows that a cover crop can improve soil, he was curious if the N fertilizer rate he applies to corn could be reduced due to several years of repeated cover crop use.

He compared his typical N rate (180 lb N/ac) with a reduced rate (130 lb N/ac). Jack hypothesized that corn yields would be comparable between the two N fertilizer rates; as such, reducing the N rate would be more profitable due to lowered input costs.

With interest growing for Iowa fruit and vegetable production, the number of Practical Farmers members who raise these crops is increasing, too. 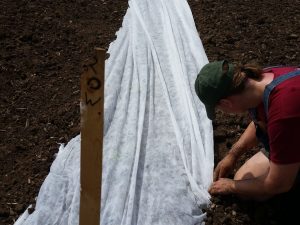 Squash vine borers can be devastating pests to cucurbit crops and are difficult to control with organic methods. In this trial, Julia Slocum and Mark Quee used a randomized, replicated design to compare five organic methods of squash vine borer control in susceptible winter squash varieties. 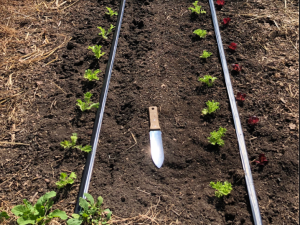 Salad greens are prized crops for vegetable growers. During 2017 and 2018, farmers conducted variety trials on head lettuces to search for the most heat-tolerant varieties for their farm.

Jordan Scheibel and Jon Yagla were interested in a similar variety trial comparing production of Salanova varieties with Eazyleaf varieties for mini-heads and salad mix, particularly during the hot summer months. Both farmers planted four replications of Salanova and Eazyleaf lettuce varieties in randomized, replicated trials. They measured yield and scored varieties for quality characteristics. 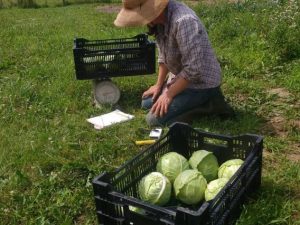 All farmers in the trial liked Farao, Primo Vantage and Caraflex; most plan to grow all three again. Capture was a new variety, and did not perform well on any of the farms. Farmers thought perhaps this was either a bad seed year or the variety struggled with Iowa’s summer heat.

Emily reported that she will definitely continue growing Farao and Primo Vantage, which had the highest yields and scored well on their resistance to black rot and splitting. “The quality measurements are really important to me. It doesn’t matter what the cabbage weighs; if it’s ugly no one will buy it.” All three farmers intend to trial more summer cabbage varieties in 2020, and are hoping drier planting conditions during May will allow them to move the trial forward a couple of weeks. 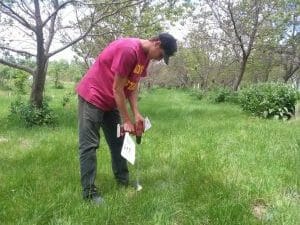 Using tea bags is a cost-effective and standardized method to measure the decomposition rate of organic matter in soils. Some research warns that certain ecosystems may not be as well suited to the method (such as marshes), and that comparisons between ecosystems may not be prudent due to differing temperature and moisture availability.

For this trial, Kathy Dice buried black and green tea bags in five perennial agroforestry systems, and also buried tea bags in one conventional corn/soy field. Mass loss of the tea bags indicates decomposition due to microbial activity and could serve as a proxy for soil health. Generally, the more microbial activity, the healthier the soil. 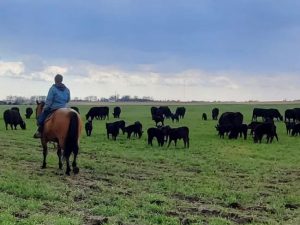 Evidence has been mounting around the profits that can be achieved when livestock graze cover crops. Grazing cover crops can benefit soil health, but the effects are longer-term and require proper grazing management.

Six cooperators, each integrated cattle-crop farmers, grazed cover crops in the fall, winter and/or spring. To determine the economic and soil health impact of grazing cover crops, the cooperators kept cover crop and grazing records and had their soil sampled in May 2019. The forage value of cover crops on each farm was estimated using ISU’s Ag Decision Maker Economics of Cover Crops tool.

The project, funded by the Iowa Department of Agriculture and Land Stewardship (IDALS), began in 2015 strictly to quantify economic impacts from grazing cover crops. In 2019, soil health sampling was added to data collection. Data will continue to be collected through 2021. 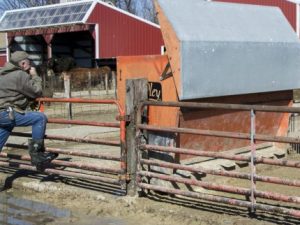 Farmers in the Midwest commonly know rye as a cover crop. A small amount is grown as food grain, and an even lesser amount is grown to feed pigs (though, this is common in parts of Europe). Tom and Irene Frantzen added KWS’s Brasetto hybrid rye to their organic crop rotation in 2016. They have since observed that it can outcompete ragweed in their crop fields and wondered about feeding the grain to their pigs.

Previously, the Frantzens fed pigs eight different rations that adjusted quantities of hybrid rye and soybean oil to achieve the same digestible energy (DE) as their standard corn and soybean ration. The results from the prior trial informed the Frantzens of the optimal hybrid rye ration. This trial evaluated feed efficiency, daily gain and feed cost per pound of gain when organic feeder pigs were fed a standard corn/soy ration compared with a corn/hybrid rye/soy ration. 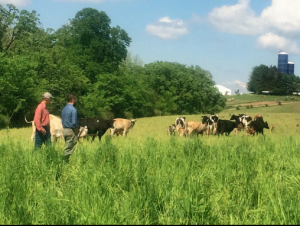 Apple cider vinegar (ACV) has long been used as a folk remedy for humans and livestock alike. Farmers involved in this study wanted to compare the milk quantity and quality of cows fed ACV to those who didn’t consume it. In an ideal research setup, half of the herd would receive ACV and the other half would not, and the milk would be analyzed separately. Because splitting the herd and keeping milk separate was not possible, the farmers tried a different method: They fed ACV to their herd for three-months, followed by three months of not feeding it.

They repeated this on-off cycle eight times. During the three-months ACV was fed, farmers administered raw, organic ACV to each herd at a rate of 4 oz per head per day. Because of the limitations imposed by the realities of a working dairy, results of this trial could not be analyzed statistically, but the farmers learned from their experiences and observations nonetheless.