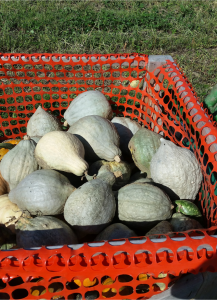 Squash vine borer can be a devastating pest to cucurbit crops and are difficult to control with organic methods. In this trial, two organic farms who have both struggled with vine borers undertook a trial comparing five methods of organic control. “The vine borers on my farm have seriously limited my ability to grow cucurbits – primarily winter squash – which are a really important end-of-season piece of the CSA spread, as well as one of my favorite crop groups to grow,” said Julia Slocum, farmer at Lacewing Acres in Ames. Mark Quee’s sentiments at the outset of the trial were similar: “Vine borer damage has been increasing the past 4 years and I need to figure out a way to control them. There are a variety of control methods and I’m seeking the easiest and most efficient way to control them.” Quee is the farm manager at Scattergood Farm in West Branch.

Slocum also scouted and counted living plants beginning six weeks after transplanting. By her next data collection during week 8, all remaining plants had severe borer damage and visible entry points, so treatments were discontinued. Slocum’s trial activities by week are shown in Table 3. At the final check during week 11, no marketable squash were able to be harvested from the trial.

To determine the effect of squash vine borer control practices on plant survival and squash yield, we calculated Tukey’s least significant difference (LSD). If the difference in plant survival or yield measurements for any of the practices was greater than or equal to the LSD, we confirm that practice had a statistically significant effect. On the other hand, if the difference in plant survival or yield measurements was less than the LSD, we consider the practices to be statistically similar. We used a 90% confidence level to calculate the LSDs, which means that we would expect our rankings to occur 9 times out of 10. We could make these statistical calculations because the farmers’ experimental designs involved replication and randomization of the practices (Figure A1). 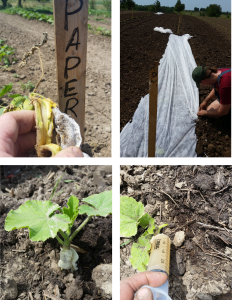 In Quee’s trial, row covers provided the best protection to Blue Hubbard squash plants from vine borers (Table 4). By week eight after transplanting, plots with the row cover treatment had significantly more surviving plants than the control and Bt injection treatments (all mortality was due to vine borer).

Though the plant survival rate was not statistically different among row cover, gauze collar, and Spinosad treatments, Quee found the gauze collars too tedious to repeat, and the Spinosad was more labor intensive for the results it provided (requiring weekly applications).

From top to bottom: Squash seedling stems were wrapped with paper collars in one of the treatments; Freshly transplanted trial replications in the field at Slocum’s; Squash stem cut open, revealing squash vine borer larva and its damage at Slocum’s.

By the end of the trial at Slocum’s, all Red Kuri squash plants in the trial were killed by vine borer; no marketable fruits were harvested. At week 6, however, the row cover treatment had statistically higher plant survival than the paper collar and control plots (Table 5). Plants under row cover, though, suffered from stunted blooms, delayed blooms and stunted plants, likely from the row cover being too tight over the plants. Plants with the paper collars had vine borer damage both below and above the collars.

On both farms, row cover provided better control of squash vine borer than any other method in the trial. For Quee, this meant a larger harvest from those plots with less work; all other treatments required weekly applications and were not as effective, while the row cover was applied and then left alone until mid-July when it was removed permanently. For Slocum, the result of the trial was less immediately useful. Though the row cover kept plants alive longer than the other treatments, all plants in her trial eventually were killed by squash vine borers prior to any harvest. However, she learned that at this time she does not have an effective control strategy for squash vine borer, and that her CSA is better served by partnering with another farmer to provide squash for her boxes.

FIGURE A1. Example of experimental design used by farmers in the trial, which included randomized, replicated plots of the vine borer control practices. This design allowed for statistical analysis of the results.