This project was funded by USDA-NRCS and the Walton Family Foundation.

This report describes the second year of on-farm research trials that investigated the effects of widening the corn row-width and interseeding cover crops. Widening the corn row is a version of the solar corridor crop system concept which “is designed for improved crop productivity based on highly efficient use of solar radiation by integrating row crops with drilled or solid seeded crops in broad strips (corridors) that also facilitate establishment of cover crops for year-round soil cover.”[1]  In 2018, two farms saw no difference in corn yields between the 30- and 60-in. row-widths, while two other farms saw yields reduced by 6–30% in the 60-in. row-widths compared to the 30-in. row-width.[2] These mixed results were in accord with previous research from the University of Missouri that found equivalent corn yields between 30- and 60-in. row-widths in one year and yields reduced by 14–39% in the 60-in. row-widths in two other years.[3] On average, the 60-in. row-width resulted in five times as much cover crop biomass as the 30-in. row-width across the farms in 2018.[2] The opportunity to grow as much as 4,000 lb/ac of cover crop biomass by the time of corn harvest with 60-in.-wide corn rows is particularly appealing to those wishing to graze livestock in the fall. And all the more so if corn grain yields match those expected with 30-in. row-widths. 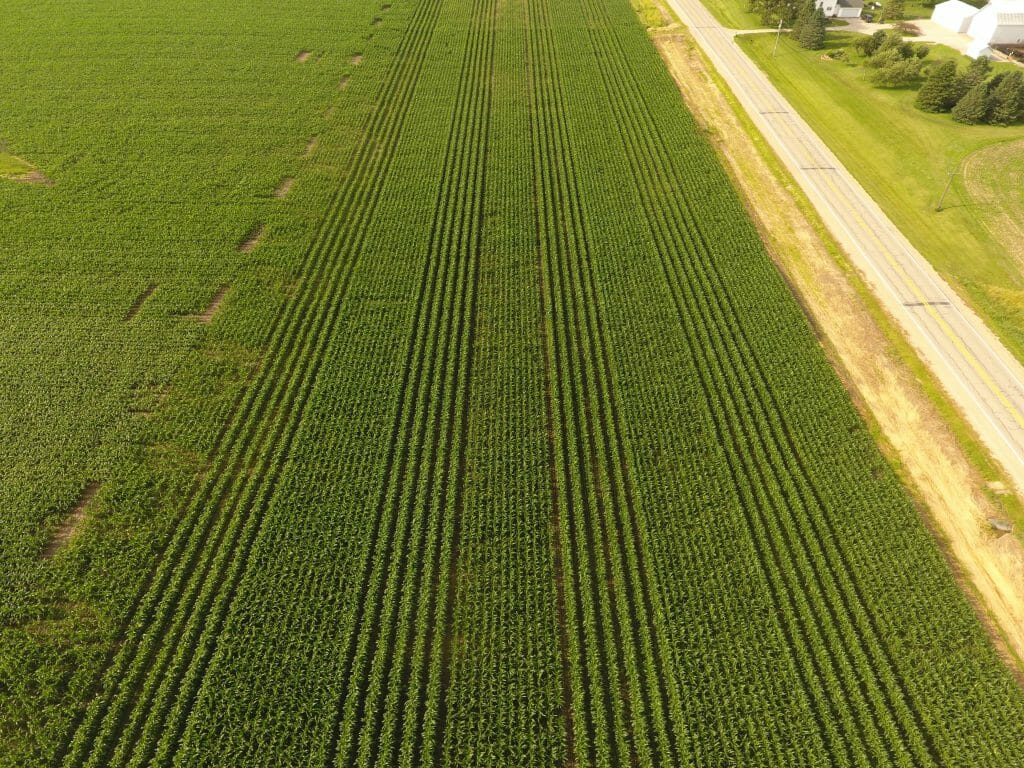 “I’m looking for ways to increase cover crop diversity and improve cover crop survival and growth [when interseeding to corn in June] without sacrificing corn yield,” said Jack Boyer, who also conducted the trial in 2018. Nathan Anderson cited his interest in increasing the feed value of cover crops for fall grazing and increasing the overall diversity on his family’s farm as his motivation for conducting the trial. Likewise, Fred Abels, Robert Alexander and Mark Yoder each indicated that the potential to add more grazing days to row-crop fields would have major impacts on their farms.

Each cooperator planted randomized and replicated strips of corn in 30- and 60-in. row-widths and then interseeded cover crops to all strips in early summer (Figure A1), except Abels and Gustafson who were both unable to interseed. Alexander’s farm is under organic management while all other farms are conventional. Strips at each farm were as wide as at least one combine pass and ran the length of the field. Corn and cover crop management at all farms is provided in Table 1. 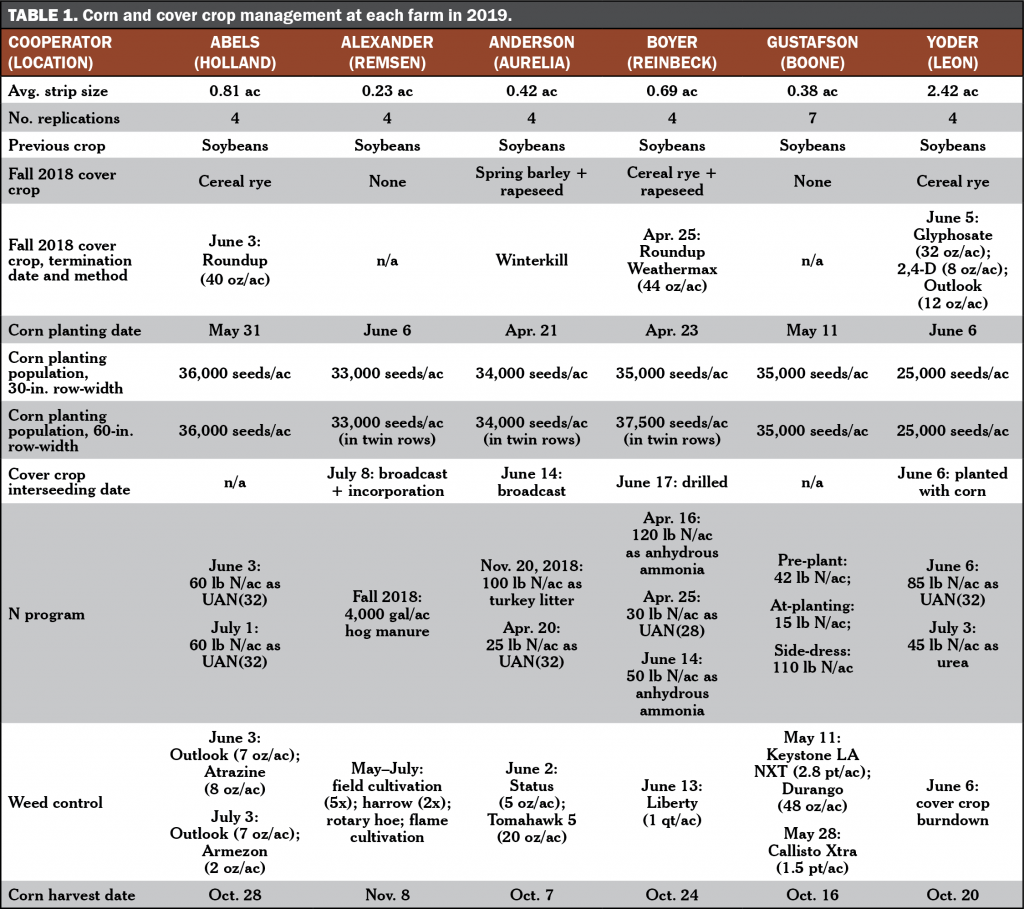 To evaluate any effects of corn row-width, we calculated the least significant difference (LSD) using a t-test for each measurement: cover crop biomass, cover crop N content and corn yield. For each measurement, if the difference resulting from the two row-widths was greater than or equal to the LSD, we considered this a statistically significant effect. On the other hand, if the difference resulting from the two row-widths was less than the LSD, we considered the row-widths to be statistically similar. We used a 95% confidence level to calculate the LSDs, which means that we would expect our findings to occur 95 times out of 100. We could make these statistical calculations because the cooperators’ experimental designs involved replication of the two corn row-widths (Figure A1).

At three of the four farms that collected samples, the farmers observed more cover crop biomass where corn was planted in 60-in. row-widths compared to the 30-in. row-widths (Table 2). These findings were particularly relevant to Abels, Alexander, Anderson and Yoder, who each cited livestock grazing of cover crops as a motivation for conducting these experiments. We also sent samples from three of the farms to Midwest Laboratories to determine the N content of the cover crop biomass. The cover crops interseeded to corn in 60-in. row-widths contained between five and 25 times as much N as the cover crops interseeded to corn in 30-in. row-widths (Table 2). Cover crop N can contribute to N pools of soil organic matter; monitoring potential benefits to succeeding crops in the rotation probably warrants investigation. 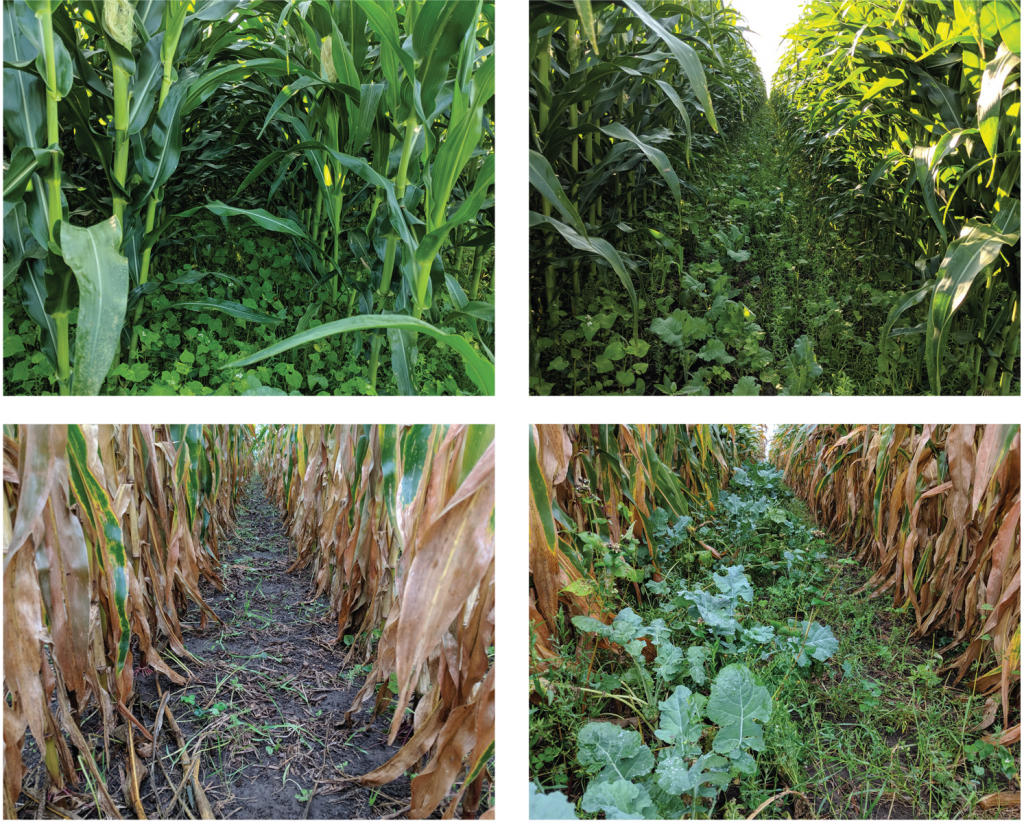 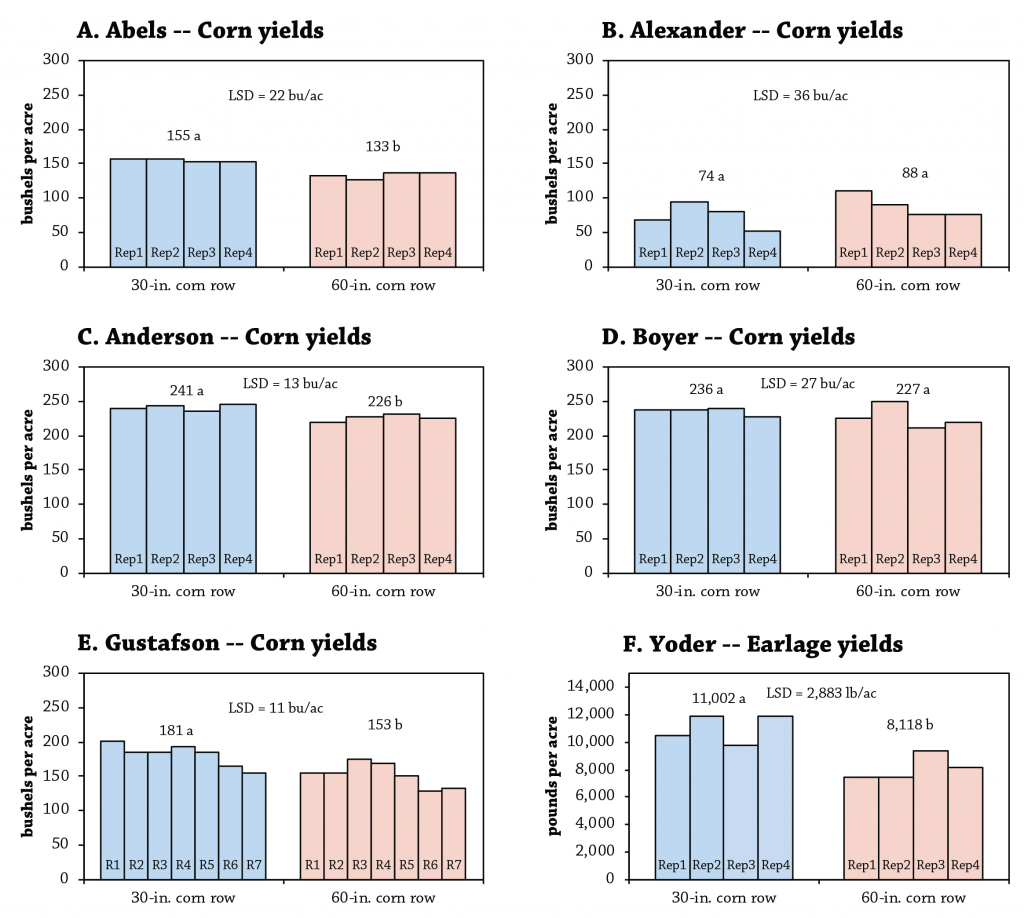 Figure 1. Corn yields as affected by row-width at A) Abels’, B) Alexander’s, C) Anderson’s, D) Boyer’s, E) Gustafson’s and F) Yoder’s in 2019. Columns represent individual strip yields. Above each set of columns is the treatment mean. By farm, if the difference between the treatment means is greater than the least significant difference (LSD), the treatment means are followed by different letter-rankings and are considered statistically different at the 95% confidence level. Click to enlarge.

Figure A1. Sample experimental design used by the cooperators. The design includes at least four replications of the two corn row-width treatments (8 strips total). This design allowed for statistical analysis of the results. Click to enlarge. 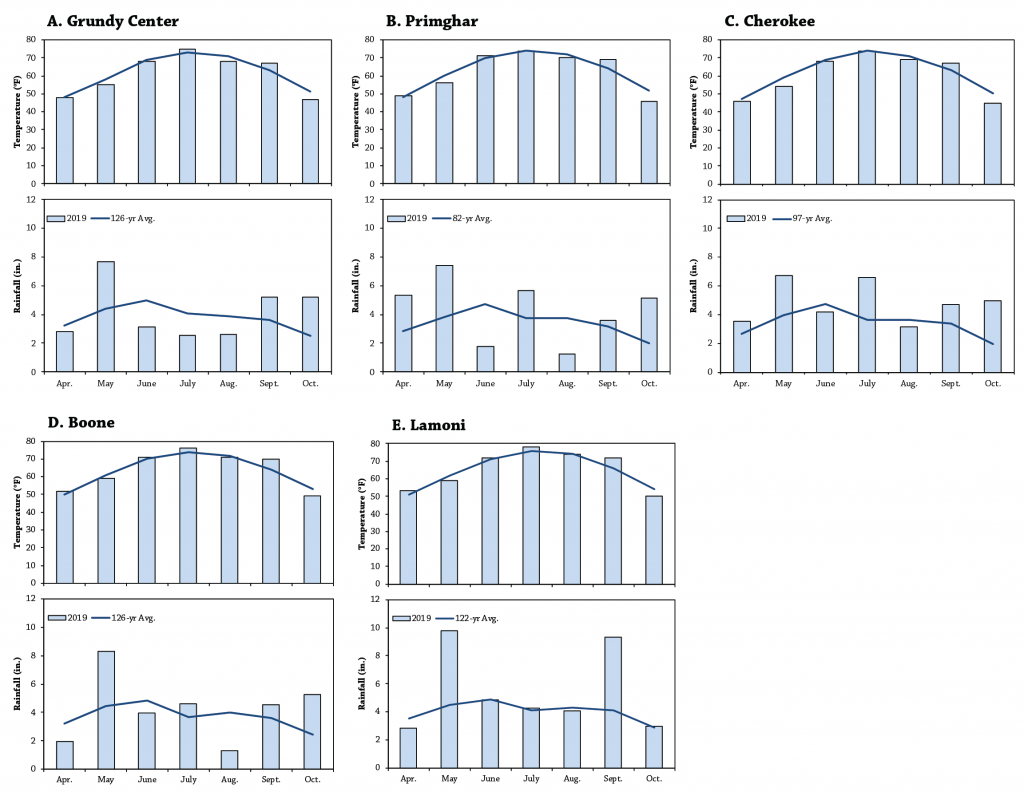