Cover crops help farmers reduce soil erosion and nutrient loss. The most common and versatile cover crop – cereal rye – is planted near corn and soybean harvest time and overwinters until it’s terminated, either mechanically or chemically, near planting time the next spring. But is this our only cover crop option in Iowa?

In this follow-up to the “Grow Your Own Nitrogen” article, from our winter 2018 magazine, learn how on-farm research, spurred by the creativity of PFI members, is exploring other options and approaches.

Over the past three years, farmers have been experimenting with planting different species of cover crops – such as cowpeas and other legumes – earlier in the season. Using a technique called interseeding, the farmers are planting the covers in the spring, a month after corn is planted when it’s 6 to 8 inches tall. Many farmers plant their corn in 30-inch rows, and farmers trying this approach have found that the cover crops cannot consistently survive the summer because the corn, once grown, fully shadows the soil surface. In response, the participating farmers are now testing wide-row, 60-inch corn in on-farm strip trials in hopes of finding a way to make cover crops work for the duration of the corn growing season.

Interseeding into these extra-wide rows lets sunlight reach the surface between the rows. The result is that cover crops like cowpeas or other leguminous cover crops can not only survive, they can thrive, bestowing the benefits of a diverse cover crop mix throughout the growing season. Since legumes capture nitrogen and store it in the soil, legume cover crops can reduce the need to purchase nitrogen in subsequent years. Ideally, farmers would plant a legume cover crop in the fall to store even more nitrogen, but there aren’t many winter-hardy options. Typically, interseeded cover crop mixes include some kind of warm-season legume like cowpeas. But a mix could include buckwheat or annual ryegrass, depending on the goals of the farmer. 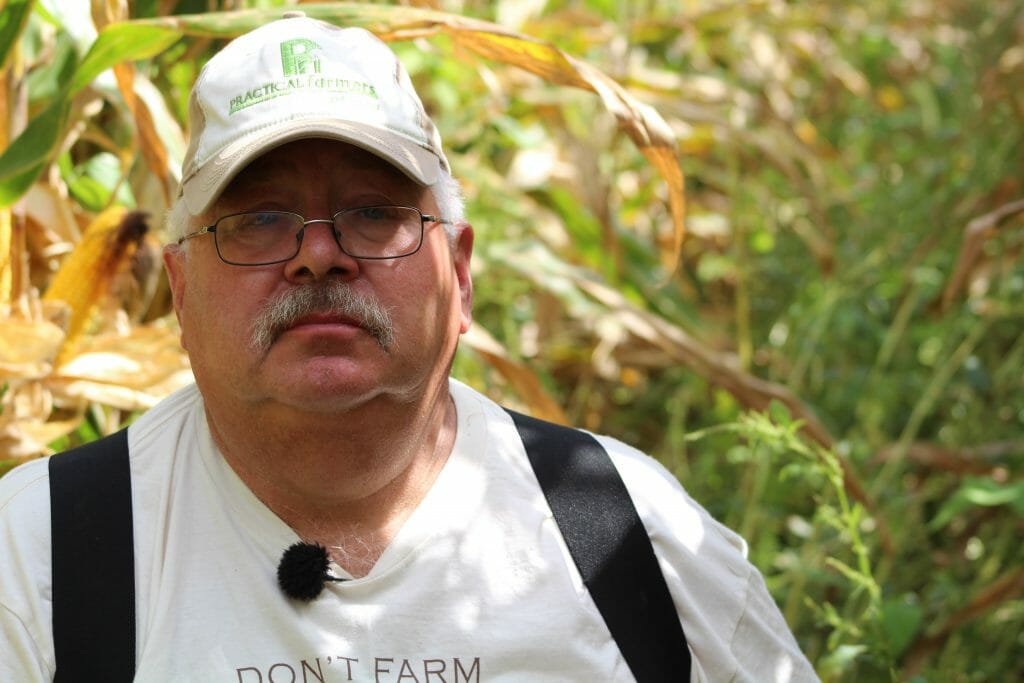 “If I could plant 10 to 20 acres [of legume cover crops] and harvest the corn, and the cows had the cover crops for grazing, that would add roughly two weeks of them being out of my hair.” – Fred Abels

Beyond the benefits to soil and water quality, interseeded cover crops add much-needed plant diversity and potential economic diversity to an operation. Cattle producers, for instance, can graze their cattle during the fall on cover crops that have been interseeded into corn. When baled up with cornstalks, the cover crops can add a valuable nutritional supplement to the diets of feedlot cattle: the green material is high in protein and results in a more balanced ration. Cattle producers can then save on stored feed costs, one of their largest annual operating expenses.

Weeds can also contribute to yield loss. Once the cover crops are interseeded, farmers no longer have a full toolbox of herbicides at their disposal because the chemicals can also terminate the interseeded crop along with the weeds. Again, the key is timing when the last application occurs and what type of chemical program is used.

Testing on the Farm

To see whether these practices worked in the field, PFI members Fred Abels, Jack Boyer, Brian and Heather Kessel with the assistance of Jim Johnson, and Chris Teachout planted randomized and replicated strips of corn in 30- and 60-inch-wide rows. To ensure consistency across both treatments, the farmers planted the same number of seeds per acre in either row-width. The farmers seeded a mix of cover crops – for this trial, cowpeas, buckwheat and annual ryegrass – into the inter-rows within one month of planting corn. 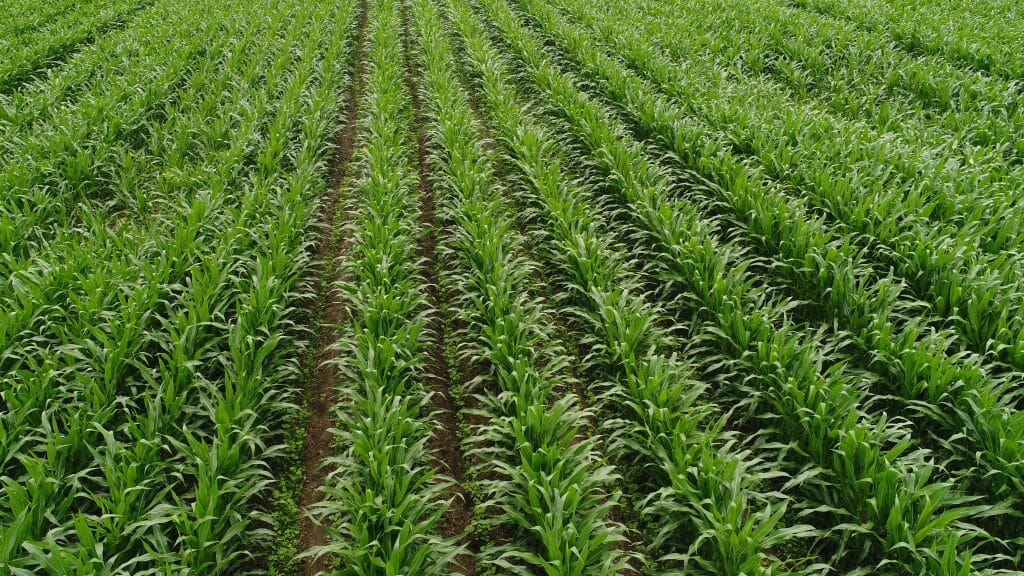 On the left, strips of corn are planted in 30-inch-wide rows at Jack Boyer’s farm on June 27, 2018, while 60-inch-wide rows are on the right side. In between the rows, cowpeas seeded 20 days earlier are visible.

Jack, who farms near Reinbeck in east-central Iowa, says he’s finding that most cover crop species can survive in the wider row spacing. “They get so much more light,” he says about cover crops in the 60-inch row spacing. “In the 30-inch spacing, you have the same struggle when corn gets 12, 13 – this year, 15 feet tall. It’s just so dark down there, not much can survive in a 30-inch row.”
Both Jack and the Kessels, who farm near Lamoni in south-central Iowa, saw no difference in corn yield between the two row widths. They also observed three to 11 times as much cover crop growth where the corn was planted in 60-inch row-widths. “You also have a lot more opportunity to build soil health and biomass for grazing,” Jack says of his results. “Here’s a prime opportunity for planting different species, and to work on soil health a little more by having some more diversity in there.” 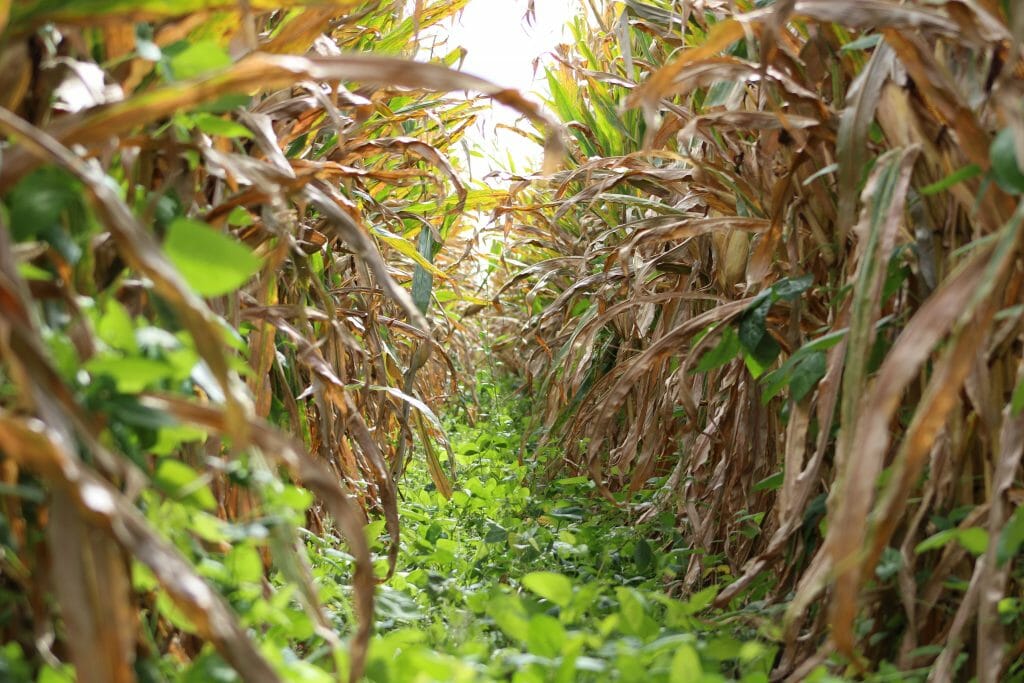 Fred Abels, who farms near Holland in east-central Iowa, and Chris Teachout, who farms near Shenandoah in southwest Iowa, saw their corn yield results come out in favor of 30-inch rows. Fred experienced a 70-bushel-per-acre yield hit from planting in 60-inch-wide rows. He didn’t think he applied a high enough herbicide rate before the mix was sown, giving the weeds a head start over the interseeded mix. Despite the results of his on-farm trial, Fred still sees potential in interseeding in 60-inch rows. “I think things just need to get ironed out,” he says. Fred also ran his cattle in the areas this fall where he had interseeded cover crops, but didn’t keep track well enough to know how much forage they were getting. The fall grazing opportunities and prospect of reduced labor after a long farming season is one aspect of the research with 60-inch rows he’s really excited about, and it’s what got him interested in participating in the first place. “If I could plant 10 to 20 acres and harvest the corn, and the cows had the cover crops for grazing, that would add roughly two weeks of them being out of my hair,” Fred says. 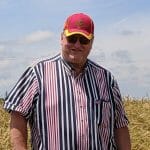 “Here is a prime opportunity for planting different species, and to work on soil health a little more by having some more diversity in there.”
– Jack Boyer

While he doesn’t have cattle, Jack sees a golden opportunity for those who do. He also suspects the nitrogen contributed from the interseeded cover crop will help the succeeding cash crops. On his farm, the cowpeas seeded between the 60-inch corn rows contained 100 pounds of nitrogen per acre in their aboveground growth. Future on-farm research could explore how the extra legume cover crop growth resulting from wide-row corn affects the next crop in the rotation. Jack knows there’s always room for improvement, but he was encouraged by his results. “I may try another small plot to evaluate weed control strategies,” he says. All the farmers involved in the study see promise in the practice of interseeding into wide-row corn – but they agree the approach needs some refining before wider adoption can be justified.