Grow Your Own Nitrogen

How farmers are incorporating more legumes into their crop rotations

“I wish to grow my own nitrogen instead of using commercial nitrogen,” says Wendell Zimmerman, who farms near Greenfield in Adair County. Echoing this sentiment, Chris Teachout, who farms near Shenandoah in Fremont County, says reducing purchased nitrogen fertilizer “would not only benefit soil health but also the bottom line of corn production.” How are Wendell, Chris – and many other PFI farmers – attempting to accomplish this feat? By incorporating more legumes into their cropping systems.

Legumes form a special relationship with bacteria in the soil known as rhizobia. These bacteria fix nitrogen from the air and make it available to the legume in exchange for carbon from the host plant. This is why legumes have long had the reputation for providing nitrogen, freely abundant from the atmosphere, to cropping systems. While farmers may use different methods and strategies to “grow” this nitrogen, they all understand how legumes can benefit their systems both agronomically and economically.

The traditional way farmers have reaped the benefits of legumes is with extended crop rotations. These rotations include a small-grains crop like oats, wheat, triticale or rye. Red clover or alfalfa can be frost-seeded to the small-grain in March. Or any number of legumes – like hairy vetch, berseem clover, crimson clover or cowpeas – can be seeded after small-grains harvest in July. In either case, the July small-grains harvest results in a large window of opportunity to grow a legume cover crop, also referred to as “green manure.”

Organic farmers, like Paul Mugge in northwest Iowa, have been using this system for years. Paul drills winter triticale in the fall, “chasing the combine” during soybean harvest. In the spring, he broadcasts red clover into the triticale just as it’s coming out of winter dormancy.

“I have never not gotten a good stand of clover [with this method],” Paul says. Following triticale harvest in the summer, the red clover’s growth accelerates. “The clover will be a foot tall before freeze-up, and I get roughly 80 pounds of nitrogen per acre for the following corn.”

But this kind of cropping system isn’t only for organic farmers. Dave Bangert is a conventional farmer in Lee County in far southeast Iowa. He planted winter wheat on his farm earlier this fall for the first time in over 30 years, with an eye to frost-seeding red clover next spring. “I’m looking forward to giving wheat and clover a try to get away from the corn-soybean rotation and grow some nitrogen,” Dave says. 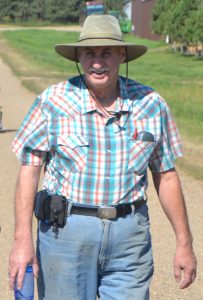 Wendell Zimmerman is conducting on-farm research to explore the benefits of adding a legume cover crop to his rotation.

Management is key to success in such a system. Because red clover will overwinter, terminating it before the next crop is a must. Paul uses a disk and field cultivator to accomplish this, while no-till farmers like Dave will rely on timely herbicide application. Regardless of the method, achieving complete termination is paramount to success. Otherwise, the legume cover crop could turn into a weed and compete with corn seedlings for moisture and nutrients, ultimately resulting in yield drag. To avoid potential headaches, some may consider terminating the legume in late fall or using species that won’t survive the winter, like berseem clover or cowpeas (both seeded after small-grains harvest in mid-summer). When managed successfully, research has shown that a red clover cover crop can provide up to 190 pounds of nitrogen per acre to the succeeding corn crop. It’s results like these that have led Bill Deen, of the University of Guelph in Ontario, to call red clover the “Cadillac of cover crops.”

New Ways to Include Legumes

Legume cover crops like clovers and vetches can only fit into crop rotations that include small grains because they need to be seeded much earlier than common fall cover crops in Iowa, like cereal rye, wheat, oats or rapeseed. Cover crop variety trials conducted in corn-soybean systems by PFI cooperators across the state from 2012–2017 confirm this. Legumes seeded in these fall trials either failed to establish or produced scant growth compared to grasses and brassicas. With little to no fall growth, it’s hard to justify the cost of seeding legumes during this part of the year. This has not deterred PFI farmers from trying new and innovative ways to include legumes in their cropping systems. 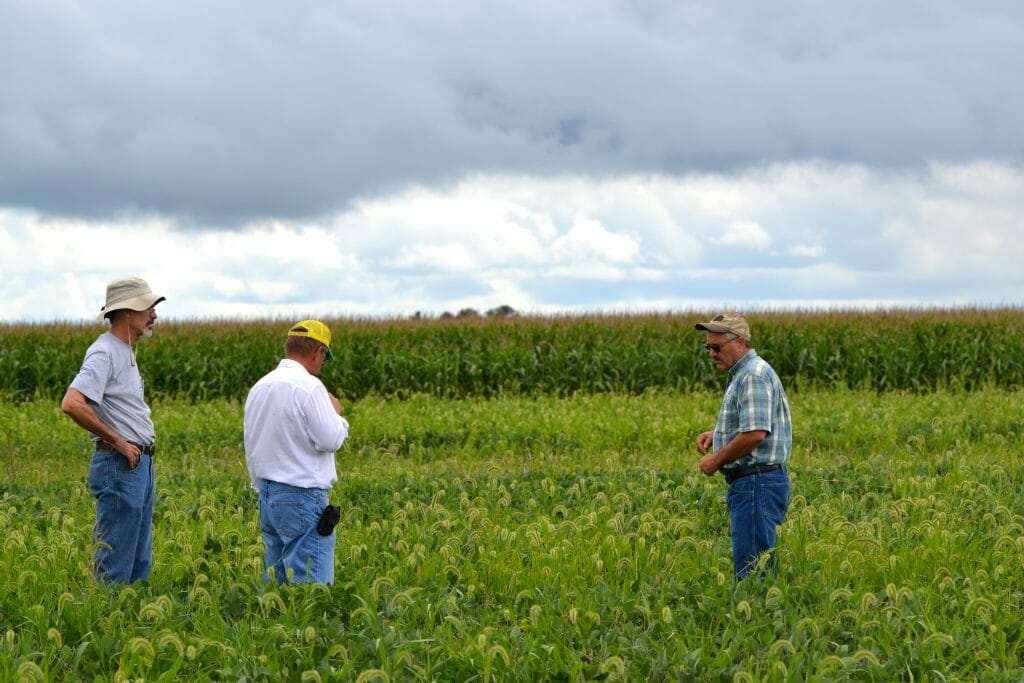 Dave Bangert (far left in bucket hat) is growing wheat on his farm for the first time in over 30 years to allow him to grow a red clover cover crop.

A consistent theme that has emerged at the annual PFI Cooperators’ Meeting in recent years is the need for non-grass cover crops (e.g., non-cereal rye) in corn production systems. This has bred creativity among our farmer ranks. Because fall-seeding of legumes doesn’t work well in Iowa, PFI cooperators are trying some unconventional techniques for this part of the world. Wendell Zimmerman and Chris Teachout are seeding legumes like field peas and fava beans in the early spring before corn planting. Fred Abels, Jack Boyer, Brian Kessel and Chris Teachout are interseeding cowpeas to standing corn in early June. Moreover, they’re planting corn in 60-inch-wide rows to accommodate the cowpeas. Growing corn in the typical 30-inch-wide rows results in too much shading for the interseeded cowpeas, and results in little to no growth. Some of these techniques are practiced in subsistence agriculture elsewhere in the world while others were once practiced in the U.S. in the early 20th century. Here in the Corn Belt, farmers are now adapting these practices to their growing season and cropping systems in an effort to fit legumes into their systems whenever they can.

During an August PFI bus trip to Western Illinois University’s Organic Research Farm near Roseville, Illinois, Joel Gruver showed where research farm staff had planted popcorn in 30- and 60-inch wide rows with cowpeas seeded in the interrows. Just like PFI cooperators, Joel is trying to grow more legumes to benefit his farm’s system. He considers this strategy a forward-looking one. “I think this probably puts more nitrogen into the soil for succeeding crops in the rotation rather than the crop in the current year,” Joel says.

Research is bearing out Joel’s suspicion. A study from Cornell University released in 2013 suggested that most of the nitrogen legumes capture from the atmosphere becomes available to plants after a legume cover crop is grown. The researchers found that much of that nitrogen is actually accessed by the cash crop grown two years after the legume cover crop. Studies of grass-legume pastures in Minnesota have also shown that while legumes do confer nitrogen to the companion grasses, this does not happen during the establishment year. Rather, this benefit emerges in the subsequent years of the pasture’s life. As the residue from legume shoots and roots decomposes, the nitrogen in the residue becomes part of the organic matter in the soil. Over time, these deposits build the soil’s capacity to supply nitrogen to cash crops. Findings like these have led researchers to conclude that repeated use of legume cover crops can help farmers lessen their reliance on nitrogen fertilizer.

Decreasing reliance on purchased inputs like nitrogen fertilizer has long been a priority for Practical Farmers of Iowa and our members. It’s a matter of resiliency in the face of fluctuating prices – and it’s a goal the founding members of PFI had squarely on their minds in the mid-1980s. Members like Dave Bangert, Wendell Zimmerman and Chris Teachout are carrying on that priority today with an added emphasis on soil health. “I hope this could become a way to reduce inputs,” Chris says, referring to why he wants to fit more legumes into his cropping system. “I also hope we can accelerate soil health.” To find out more about how legumes are affecting their farming systems – and to answer other farming questions – Wendell, Chris and other PFI farmers are conducting on-farm research on their innovative techniques. Stay tuned to “Practical News,” our weekly email newsletter, and the PFI website for results from these studies later this winter!