“Killing two birds with one stone” or in the context of cover crops – nourishing both cattle and the land with one crop. If there is one thing I’ve learned in my short time here, it’s that grazing cover crops is an efficient and effective way to sustainably use land. 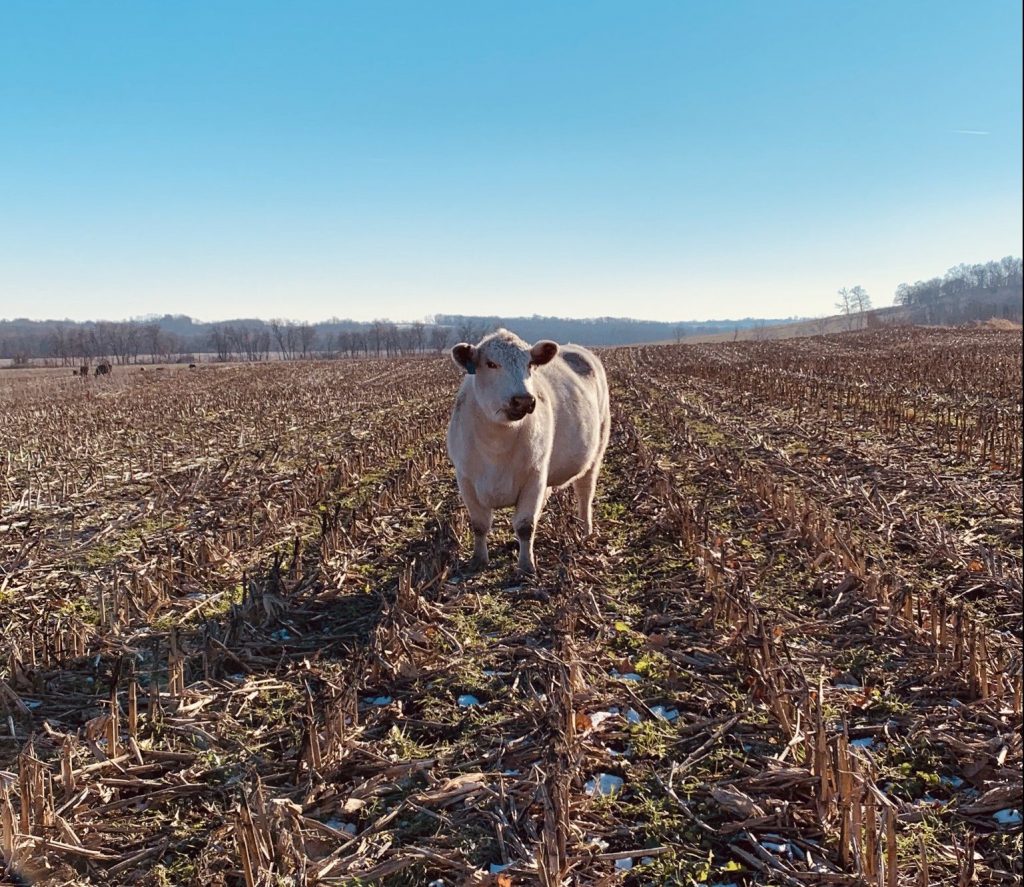 To many, the benefits of cover crops are not a secret. They can improve soil quality, suppress weeds and reduce erosion while also building organic matter. So why don’t we see more cover crops planted each year? The answer is cost. Seed and application expenses are often the main deterrent to farmers. Although implementing this sustainable practice has shown to provide many cost-saving benefits in the long-term, farmers are often forced to think in the short-term.

Thankfully, there is a short-term solution – a way to mitigate costs so you can actually make money back the same year of planting cover crops. The easiest way is by grazing cover crops. Kurt Moffitt, a cattle and row crop farmer near Indianola, would most definitely agree. “We started cover crops as an erosion control measure; I have seen less erosion caused by big spring rains. We are using grazing as an attempt to recapture some of the cost of seeding and terminating.” This has shown to work quite well for the Moffitts. Justifying costs by grazing is a big part of what makes their cover crops profitable. The next step is putting pencil to paper to calculate the forage value of cover crops – but how? 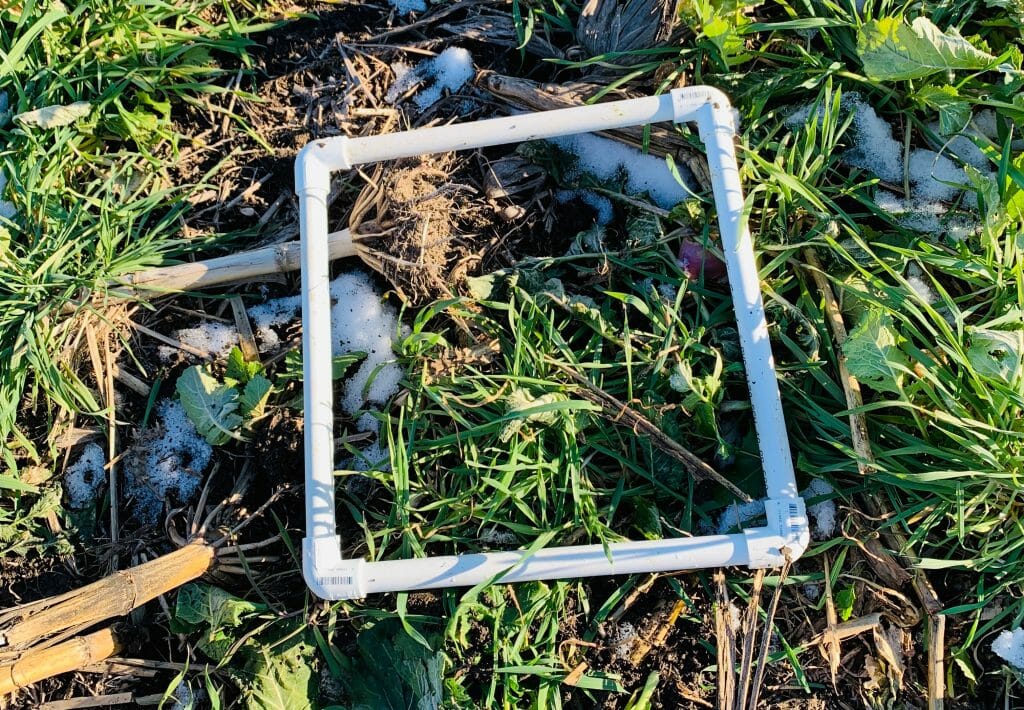 Before Thanksgiving, I went to Indianola to visit the Moffitt farm to show Kurt how to calculate the numbers he was looking for. Kurt had just turned his cows out on cover crops to graze. The herd didn’t hesitate having a  Thanksgiving feast on Kurt’s lush turnip and cereal rye stand. We started by clipping random samples of one-by-one square foot areas of ungrazed biomass. Once we collected five randomized samples, we dried and weighed the biomass to get an estimate of how much dry matter each acre provides, using the equation in this factsheet. You can then use Iowa State University’s Ag Decision Maker tool, Economics of Cover Crops for analyzing the economic benefits and costs from cover crops, including both harvesting and grazing.

With these tools, Kurt and I were able to validate how many grazing days the cover crops provide and how much money he is spending and saving through grazing cover crops each year. After drying and weighing the biomass, we found that he has an estimated 3,976 pounds of dry matter per acre. He has 52 calves grazing on 75 acres collectively, requiring 2,496 pounds of dry matter per day. Based on numbers generated using the Ag Decision Maker tool, grazing cover crops is saving Kurt $1.81 per animal unit (1,000 pounds of animals) per day. This number was calculated based on the assumption that feeding hay instead of cover crops would have cost $100 per ton. Over the course of a 21-day grazing period in November, the total forage value of the cover crops equaled $31.55 per acre.

Kurt’s seed and application costs totaled $38.00 per acre. At this point, he has yet to break even, but if he were to graze in the spring, this second grazing opportunity would further increase the forage value of the cover crop. Kurt may even earn a profit from this practice. Additionally, these number don’t include cover crop cost-share which help keep farmers profitable. 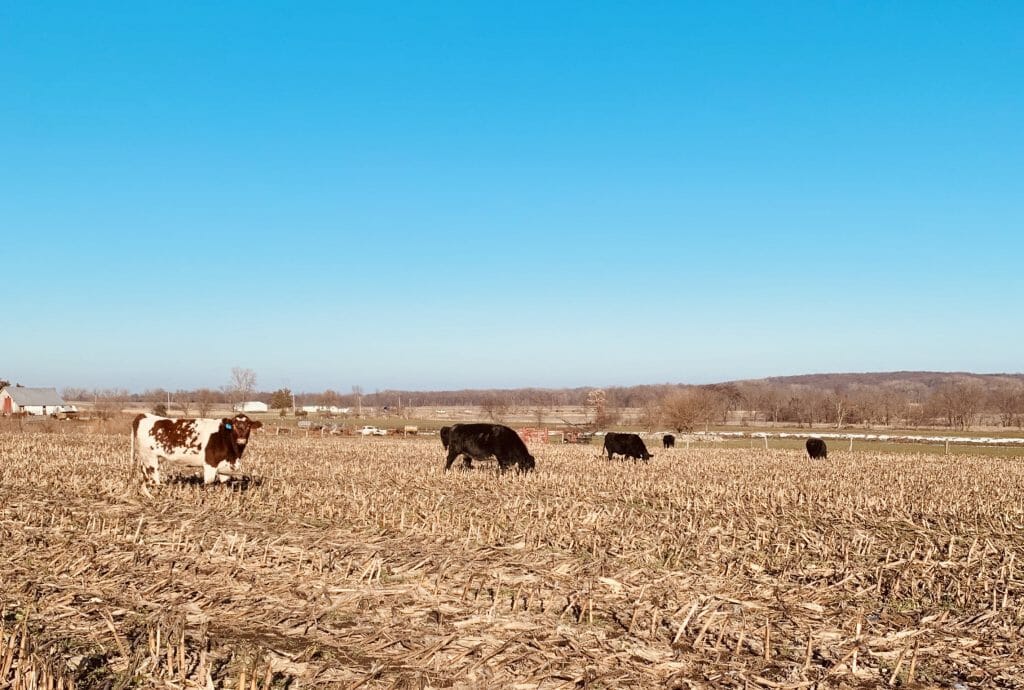 While this covers the issue of cost, there are other difficulties associated with grazing cover crops. Kurt explains that timing and weather can also hinder productivity. “Drilling after harvest does not allow enough growth time for the covers to give any substantial amount of feed in the fall. Aerial application around labor day into corn has given us the best results for fall growth, but only if there is a rain within a week of application. Without timely rain, stands can be insufficient.” Even so, this has not scared Kurt away from grazing cover crops, rather it has caused him to try different things and learn more, including planting two different species of cover crops in his mix, “By having two different plants, hopefully conditions will be good for at least one of them. We tried using only frost killing species (like oats and clover) ahead of corn to eliminate termination risk. We never felt they gave us enough biomass to be worth the time, effort and cost.”

Kurt has planted and grazed cover crops the last five years, and has no plan of stopping anytime soon. For now, he’ll stick with a mix of turnips and cereal rye.