While corn is most-often planted in 30-in. row-widths in the Upper Midwest, interest in alternative planting arrangements remains. One such arrangement is the solar corridor crop system. As defined by researchers in Missouri: “The solar corridor crop system is designed for improved crop productivity based on highly efficient use of solar radiation by integrating row crops with drilled or solid seeded crops in broad strips (corridors) that also facilitate establishment of cover crops for year-round soil cover” (Kremer and Deichman, 2014). One variation of the solar corridor crop system is that of strip intercropping corn, soybean and oats. Using this system, PFI cooperators saw improved corn yields in on-farm research conducted in the 1990s. The improved yields were a result of increased solar capture by the corn in the border rows of six-row strips that were adjacent to 15-ft-wide strips of soybeans and oats – crops that do not grow nearly as tall as corn.

Another variation of the solar corridor crop system involves planting corn in wider rows. This system particularly appeals to farmers who have been trying to interseed cover crops to corn at the V4 stage. Seeding at this stage (early June) presents opportunities for an abundance of cover crop species like cowpeas, sunn hemp, radish, buckwheat and many others that cannot be seeded in the fall in Iowa. A wider corn row might increase the chances of successful interseeding by permitting more sunlight to the cover crops seeded in the interrows. PFI cooperator Jack Boyer has had success interseeding cover crops to seed corn (Gailans and Boyer, 2016) but has seen mixed results when interseeding into field corn (Gailans and Boyer, 2015; Gailans et al., 2017). He concluded that interseeded cover crop success owed to the seed corn permitting more sunlight to the interrow than field corn. With the potential to grow more cover crop biomass in wide corn rows, the farmers conducting the present study cited opportunities for fall grazing and N contributions to the soil from warm-season legume cover crops as their motivation for investigating corn planted in 30-in. and 60-in. row-widths.

This study was conducted by Fred Abels near Holland in Grundy County; Jack Boyer near Reinbeck in Tama County; Brian & Heather Kessel and Jim Johnson near Lamoni in Decatur County; and Chris Teachout near Shenandoah in Fremont County.

Boyer and Teachout collected soil samples from each strip in mid-June. Samples were sent to AgSource Laboratories (Ellsworth, Iowa) to determine the burst of CO₂-C following rewetting of dried soil using the Solvita assay. 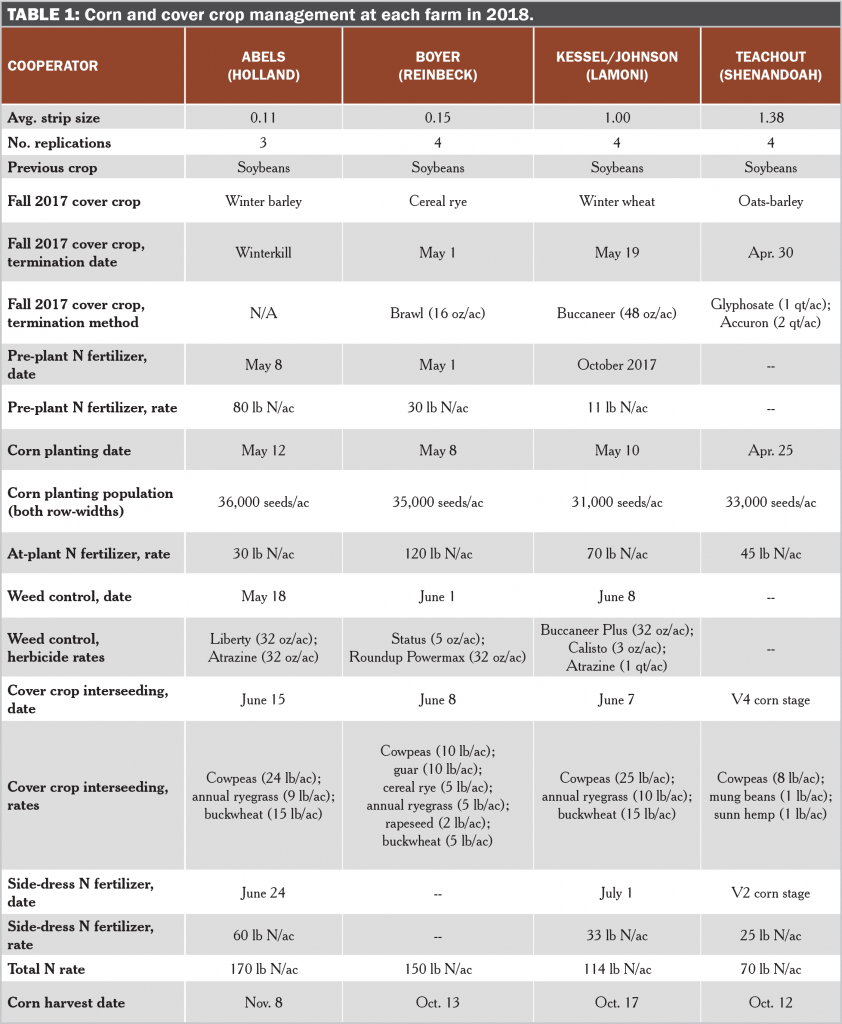 All cooperators harvested corn individually from each strip. Yields were corrected to 15.5% moisture. 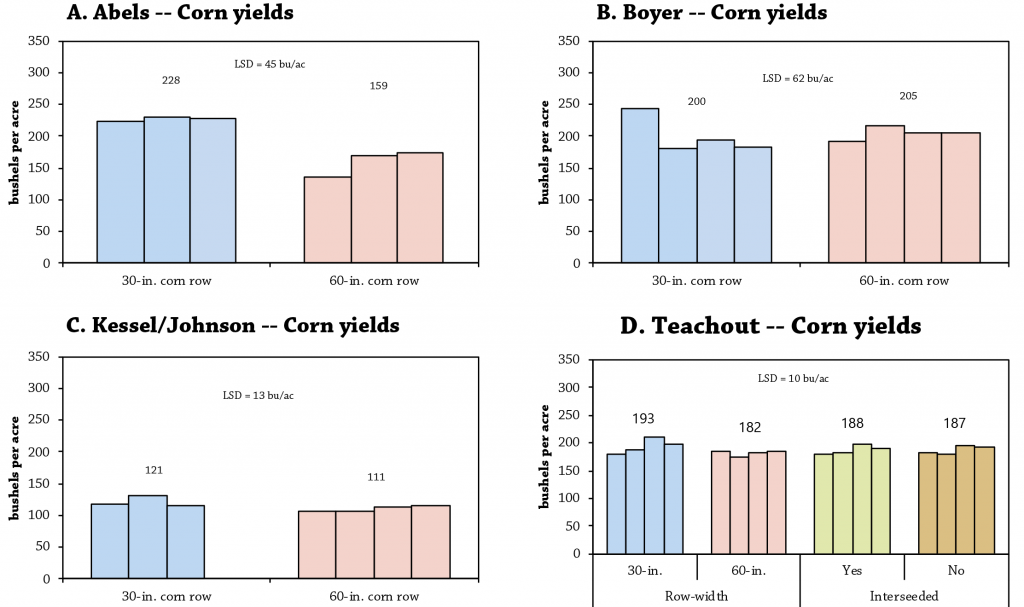 FIGURE 1. Corn yields as affected by row-width at A) Abels, B) Boyer, and C) Kessel/Johnson and D) as affected by row-with and the presence or absence of interseeded cover crops at Teachout in 2018. Columns represent individual strip yields. Above each set of columns is the treatment mean. By farm, if the difference between the treatment means is greater than the least significant difference (LSD), the treatments are considered statistically different at the 95% confidence level. 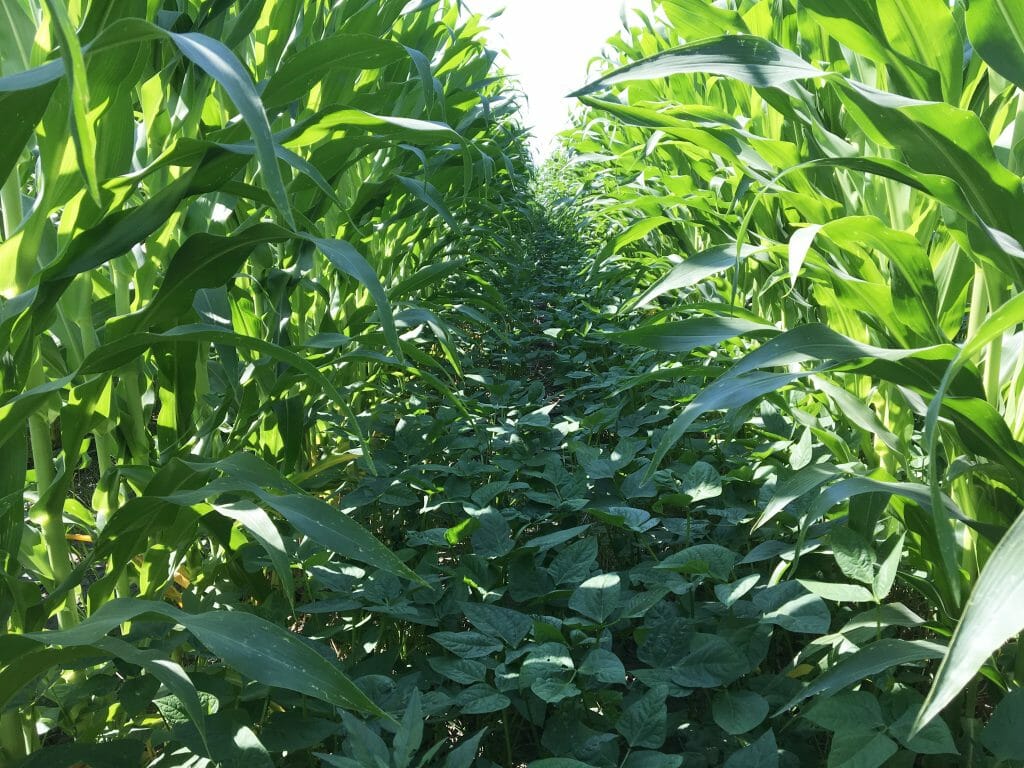 Cowpea cover crop growing between corn planted in 60-in. row-width at the Kessel/Johnson location on July 12, 2018. Corn was planted on May 10 and cowpeas were interseeded to the corn on June 7.

Cover crop biomass near the time of corn harvest

Though not explicitly measured, weeds did comprise portions of the sampled cover crop biomass. Abels, Boyer and Kessel/Johnson each noted that controlling weeds when interseeding cover crops to corn in June can present some challenges. After cover crops have emerged, spray or cultivation passes cannot occur without damaging those cover crops. While a wider corn row can better accommodate interseeded cover crops, this can also present opportunities for weeds as well.

The Solvita assay determines soil microbial activity by measuring the amount of CO₂-C respired over a 24-hour period from a dried soil sample that has been rewetted and held at an ideal temperature. Neither corn row-width nor the presence or absence of an interseeded cover crop had an effect on the CO₂-C soil burst at Boyer’s and Teachout’s (Table 3). Though Boyer saw more cover crop growth with 60-in. corn row-widths (Table 2), this did not improve soil microbial activity. On the contrary, research in Missouri has provided evidence for increased soil glucosidase activity, another indicator of soil microbial activity, resulting from corn in 60-in. row-widths compared to 30-in. row-widths (Kremer and Deichman, 2014). The authors of that study attributed increased carbohydrate release to the soil from corn roots resulting from increased solar radiation capture by the corn in the wider row.

This study tested the effect of corn row-width (30- vs. 60-in.) on corn yield and interseeded cover crop biomass production. The Boyer and Kessel/Johnson locations saw statistically equivalent corn yields between the two row-width treatments (Figure 1) but also observed much more biomass produced by the cover crops interseeded into the corn planted in 60-in. row-widths (Table 2). Corn yields at the Abels and Teachout farms were reduced in the 60-in. row-width treatment (Figure 1). Abels also saw no difference in the amount of biomass produced by the cover crops interseeded into corn planted in either row-width (Table 2). Soil microbial activity, as determined by the Solvita CO₂-C burst assay, was not affected by corn row-width or interseeded cover crops at Boyer’s and Teachout’s (Table 3).

Given the mixed results, the cooperators involved in this study agreed that the practice of planting corn in 60-in. row-widths needs some refining. Because the Boyer and Kessel/Johnson farms observed so much more cover crop biomass when interseeding into corn planted in 60-in. row-widths, they see opportunities for grazing livestock after corn harvest. Though he saw challenges, Abels sees potential for dedicating 10 to 20 acres on his farm to wide-row corn that is interseeded with cover crops. “[The cover crop] would add roughly two weeks-worth of forage for my cattle [in the fall] if we can get things ironed out in this system,” he said. Moreover, the potential to grow more legume cover crop (cowpea) biomass N with this system could improve soil fertility for succeeding crops in the rotation. That biomass N will become soil N as the biomass decomposes. Boyer summed it up: “Your main reason for trying something like this should probably be grazing. Weed control can be a challenge with interseeding cover crops to wide-row corn in June and we won’t know if we can cut back on N fertilizer for succeeding cash crops until we try it.”

Thank you to Bob Recker of Cedar Valley Innovation in Waterloo, Iowa. His presentation on the topic of wide-row corn at the 2018 Practical Farmers of Iowa annual conference spurred the idea for these on-farm research trials.